After the release of Aliens: Colonial Marines in 2013, the fans of the franchise were distraught. It was a complete bitter disappointment in nearly every single facet. Then news of Alien: Isolation trickled down. Early on, weary of the disappointment of Colonial Marines, fans were skeptical of some of the early revealed aspects of the game. And then October 2014 rolled around and Creative Assembly released Alien: Isolation, blowing fans (and critics) away and reminding us all that it isn’t all doom and gloom.

Alien: Isolation is now racking in a slew of awards and it was recently announced that the game had sold over 1 million copies. AvPGalaxy recently had the chance to ask Alien: Isolation writers Dion Lay and Will Porter about their work on the game, on creating the vast and engrossing world that Alien: Isolation takes place in.

AvPGalaxy – One of the defining aspects of Alien: Isolation is that it in heavily grounded in Alien. This is easy to see in terms of visuals. Did this decision create any challenges from a narrative point of view?

Will Porter – What makes the Alien franchise so fantastic, especially if you’re focused on its earliest films, is that an air of mystery pervades everything. Earth is distant; how much WY really know about LV426 is unknown; Ash’s history prior to replacing the Nostromo’s Science Officer is unclear… and I think this is why Alien: Isolation has managed to make itself comfortable within the early canon. It’ s also why, by my estimation, there weren’t too many challenges to overcome caused by the Alien tag – outside of the usual trials and tribulations of game development that is!

In fact our grounding in Alien gave us countless opportunities, especially in world-building. More than anything Alien, especially the first film, is about real people in space. It posits that travel in amongst the stars isn’t beautiful and life-affirming: it’s gritty, difficult, poorly-paid and laborious. Lacing our game with the ‘reality’ of Alien (alongside the spirit of the seventies) wasn’t a narrative challenge – but a total boon.

Take our psychiatric facility in San Cristobal Medical for example. A lot of it is flavour of course, most of my job is, but rather than take the standard video-game trope of the ‘gore-dripped madhouse’ we could take Alien’s realism and use it to flag interesting concepts. Say, for example, the fact that the human mind isn’t built for the vastness of space – or even prolonged removal from the natural rhythms of Earth. Mix this in a touch of what we’d now recognise as the 1970s’ misapprehensions in mental health treatment, through signage and language, and all of a sudden you’ve got a space to explore that feels subtly different to where most games have gone before.

(It could be readily argued that a lot of players wouldn’t notice this background detail as they’re being chased by a gigantic death-beast through most of the level and frantically trying to tap 1702 [my birthday!] into a door. This is, of course, true – but I very much believe that much of my work is for the player to absorb quite ambiently as they scan through terminals and half-listen to announcements. It’s a framing device that influences mood and expectation, and complements what one would hope is the cold-dread of the gameplay proper.) 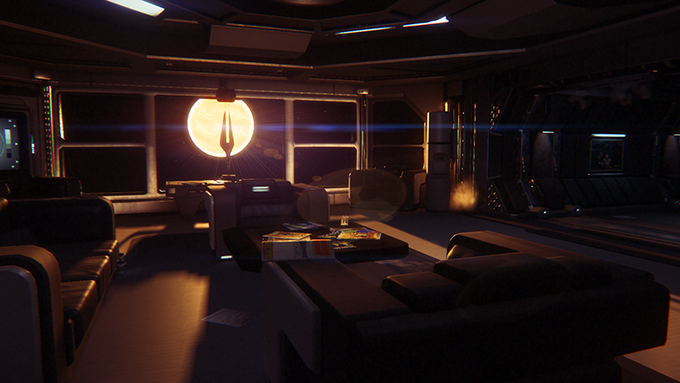 Dion Lay – Using Alien as a starting point was actually beneficial rather than restrictive because the first film manages to do a lot with a very small cast and location. We know that working in space is not the high adventure we may have all envisaged and hoped for, the technology is actually pretty basic and recognisable and there are still the same class tensions and large faceless corporations – it’s not the utopian world of Star Trek. It was also helpful in setting the tone of the story – we could immediately test an idea by checking if it would seem in place with the original film.

When we came to expanding the details of Dan’s story it was a case of threading those themes throughout the audio and text logs while also using them to build up the background of Sevastopol so it felt like a real place with a long history. We also tried to get this mix into all the posters and adverts on Sevastopol, which Will and I both loved doing, especially when we saw the art for them. On the flipside, when the art for the poster came first we would look to Alien for something that would fit. For example, there were some really nice holiday posters created, but because we never see Earth in Alien, we ended up writing the copy for them as if they were slideshows of locales instead, similar to one Ellen Ripley is looking at in the Aliens deleted scene when she learns about Amanda from Burke.

AvPGalaxy – Some of the story elements used within Alien: Isolation were familiar to those gamers who read the comics or novels. Did you look towards the existing Expanded Universe when crafting the story for Alien: Isolation?

Will Porter – Yes we did, but given our focus on the original movie – and the fact that not all Alien fans are into the Expanded Universe – it was more to make sure that we weren’t stepping on any unexpected toes than anything else. In terms of the wider story arc this is perhaps a better question for (the amazing, talented, handsome etc) Dan Abnett, but in terms of the granular stuff we were certainly careful of accidentally using pre-existing character/ship names and the like. (That happens more than you might imagine when you’re working with a license that has the habit of borrowing names from the works of Conrad!)

AvPGalaxy – Alien: Isolation introduced us to the Seegson Corporation and many of their properties including Sevastopol and the Working Joes, all of which were considerably developed. What sort of process went into the creation of the company, their history and particularly their Working Joes?

Will Porter – Bear with me on this one.

In 1999 I spent a short while living in North Carolina, which is where – standing six deep in a chaotic McDonalds queue – I saw a sign that read ‘Why not ask about our orange drink dispenser?’.

It stuck with me because it was nonsense on so many levels, not least the fact that the term ‘orange drink’ was so brilliantly vague. But why would I care? Why would the people about to sell me a burger care? Who thought that question should even be prompted in me? The answer: most likely a dull meeting in a corporate boardroom far, far away (light years, one might say) from the ground-level consumer.

Maybe it was an executive fighting the corner of the drink dispenser division, maybe it was a clueless bully surrounded by Yes Men… Whatever the cause, it was something that no-one either dared to call out, had the heart to stop or had it in them to care about. It was someone else’s problem, and a minor detail.

Everyone lower down the chain of command must have known that Orange Drink Dispenser sign was ludicrous, but it came from the top – so it went unchallenged. It became a sign on counters nationwide to be ignored forever. Until, of course, it eventually became the android line ‘Why not ask me about Sevastopol Safety Protocols?’ in Alien: Isolation.

To me, this is the voice of Seegson. An ineffectual boardroom (forever leaking talent to the likes of Weyland-Yutani) sending out nothing but self-deluding missives that have little to no use on Earth – let alone for the real people suffering on a dilapidated space station floating alone on the edge of space.

I wanted to make them the masters of corporate double-think – stressing the ‘everything is okay, we value you’ propaganda while the executives themselves look for their next plum job and siphon off what remains of the company gravy train.

Space Stations like Sevastopol are Seegson’s white elephant, and even though everyone who works for them knows they’re doomed – the enforced company message that everything is fine has been drummed home, and disbelieved, until the inevitable has taken place. Ultimately, it’s the little guys – the real working joes – caught in the downfall.

I think it’s from this language of corporate failure that the Seegson character, for me at least, grew. It was quite fun filling Seegson into the Weyland-Yutani timeline, positioning them even during their boom years as the Skoda to WY’s BMW. Likewise their sales ploys – such as tapping into the disquiet over the human verisimiltude of androids to explain away their shoddy products – were a great way to inject the android Working Joes into gameplay.

Ultimately, though, I think many of us know of companies like Seegson, which is why it struck something of a chord with people. 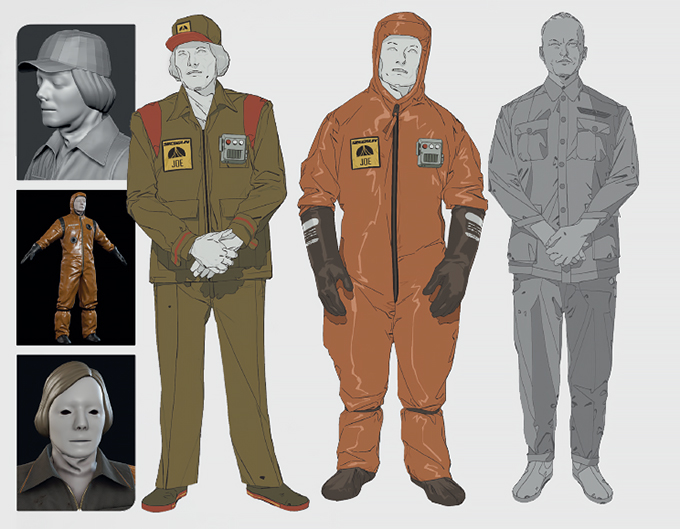 Dion Lay – When we started we knew we wanted some android antagonists in the game, but that they would be very different to the advanced Weyland-Yutani androids from the films. I thought if they were going to be simpler versions then maybe Seegson would try and turn a negative into a positive and sell them on the idea that they were more ‘honest’ androids – they weren’t pretending they were humans and shouldn’t be treated as such. Of course, this also ties into the class theme from the films and so it seemed natural to call them ‘Working Joes’.

I’m a big fan of cult British TV (The Avengers, Sapphire and Steel, The Prisoner) and a lot of it has a weird, understated horror to it that seemed to fit perfectly with the world of Alien, so when we came to do the dialogue we decided upon very polite service lines that would gain sinister undertones when at odds with the Working Joes’ actions. Our first attempts came out too much sounding like what we called ‘posh butler’, so I thought a better reference would be those automated messages you get when you phone a call centre – the content of the words are polite and friendly but it’s lacking any real sincerity. When we were designing the posters and adverts I watched a lot of British public information adverts from the 70s and there’s a particular chilling one about children playing near water narrated by Donald Pleasance which seemed like the perfect reference for the voice of the Working Joes.

Dan Abnett came up with the idea of Seegson in the first draft of the story as he felt we needed another corporation that wasn’t Weyland-Yutani and that they should be a less successful version who are almost getting pushed out of business. He then developed it further when we wanted to integrate it more, adding some history and the fact that they were once Sigg & Son (I think the spelling may have changed since then). Once we were doing the audio and text logs Will really went to town on it with more of their timeline and added some nice little details, like the fact that they were reverse engineering WY androids to try and improve the Working Joes!