AvPGalaxy – Many fans have noticed an unusual absence of chestbursters from the game. Was there any particular narrative reason for this omission or was it down to gameplay considerations?

Dion Lay – As much as we all love a good gory chestburst moment, I think it was one of those aspects that we’ve seen a lot in games, movies and comics, so we didn’t feel the need to include seeing one in the game. Of course, it does happen offscreen and those players who spend their time checking out the environment will be able to find the signs. It reminded me of Lovecraftian and Quatermass horror, where the hero gradually uncovers the mystery piece by piece only to find a horror worse than they could ever imagine!

Will Porter – With the above in mind, early on I was thinking that Ricardo could get facehugged during Ripley’s period of radio silence in Apollo, that he wouldn’t entirely remember or understand what happened (as with Kane) and that ultimately he’d keep his growing fears a secret from Ripley until the point of chestburst after the communications dish realignment. However, on reflection, we felt that if we were being faithful to Alien then the gestation period simply wasn’t going to be long enough – and as such it became a final facehug instead. That came with its own added elements of horror, when he presumably regains consciousness off-screen, so we gained something there. 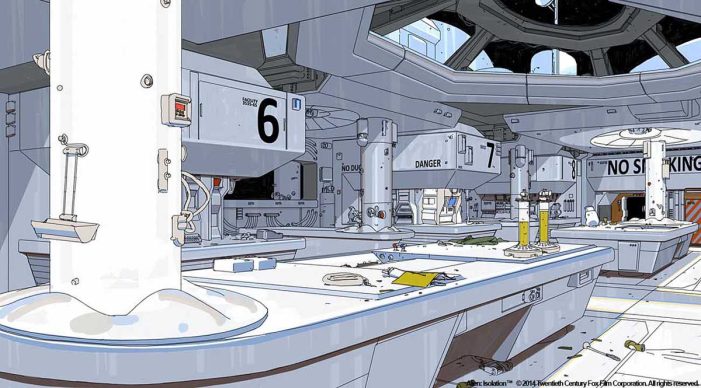 AvPGalaxy – What kind of process do you go through when planning and placing all the in-game world building elements such as the data terminals?

Will Porter – What we do is essentially fill the details around the edges of levels provided by designers. Seegson Synthetics, for example, has the overlay of current events – the Survivors, the Alien and Ripley – but through our work and that of the art team, you can also gauge what Seegson originally intended the area to be, along with the under-used facility it eventually became.

The story of the game is you – as Amanda – being hunted through the station but if we’ve done our job right, you’ll have an idea of where you are, what was intended for that facility and what actually happened there as Sevastopol declined – and, depending on the area, when the Alien showed up too. Even something as basic the names for all the rooms (big shout out to Andy Oakley here, king of the sign system) are a nice prompt for the imagination.

Again, in keeping with the perceived ‘reality’ of the Alien future I did my best to lace audio and text logs with modern concerns that will likely still be a going concern next century. Health insurance is frequently mentioned over the tannoy and in advertising, questions of gun ownership and the second amendment get a nod, we have pay-day loan companies on-station, contraband goods, repossession… all that good stuff.

These are all microscopic parts of the game, but hopefully blend together to evoke a grounded and readily explicable version of the future.

Dion Lay – The very first thing was deciding that the logs should function as a secondary tier of the narrative; they should add depth to the world and characters for those players who want to explore a bit more without leaving other players in the dark about the story.

Next it was a case of taking Dan’s story, the themes of Alien, Sevastopol and its characters and seeing what interesting stories could grow out of there. We had some rough outlines and themes to begin with and these were constantly worked on and developed as the environments and design work informed them. We wanted the logs tied to particular locations but also have them intersect with each other, so I wrote out a massive timeline of Sevastopol’s history to keep track of everything and avoid contradictions.

After that it was a case of weeding out any logs that were repetitions, shifting them along the timeline and rewriting when we realised there was a way to tie them closer to another log or story point and finally working with the designers to figure out where they should be placed to make sure nothing was revealed too early. It was like doing a jigsaw where someone kept changing the pieces but ultimately a lot of fun!

AvPGalaxy – Did you ever explore the possibility of having the Derelict ship have more presence in the story of the game? If so, what kind of things were you looking at including?

Will Porter – The inclusion of the Derelict was something planned and agreed long before I turned up on the scene, so I can’t really say. I personally couldn’t imagine giving it anything extra, however, because it’s such a focal point in the Alien canon where so many timelines criss-cross (now alongside, of course, the Prometheus factor) that further exposure could easily muddy the waters. Working alongside 20th Century Fox, we were able to build into the canon with Marlow turning off the signal, which was really cool, so I think we covered it as much as we could.

Dion Lay – As Will says, it is such a focal point that I don’t think it was ever going to have more presence than it did in the final game. I was really pleased when Fox let us put the actual beacon into the level and just seeing the work that the rest of the team did on the surface and the Derelict was breathtaking.

AvPGalaxy – Was there any point in which the Alien Queen actually made a presence in the story of the game and how would that have played out?

Will Porter – No, she was always as previously described – there but unseen, for fear that the player would expect a battle. I think that, ultimately, we made the right choice. There were many meetings in which we discussed having vague hints at her presence but, to borrow a Dan Abnett phrase, it was too ‘on the nose’. She’s down there somewhere, in amongst the cacophony, but Ripley was lucky enough not to bump into her.

AvPGalaxy – The end of Alien: Isolation was left quite open ended. We know from Gary that ideas for the sequel are being talked about daily at Creative Assembly. Are there any unfinished story elements that you would like to explore in a potential sequel?

Will Porter – I was a contract writer on Alien, and I’m now back on my own game Project Zomboid. As such, sadly, there’s not much I can say on that subject I’m afraid.

Dion Lay – We haven’t got any information about sequel plans, sorry!

AvPGalaxy – Thanks for taking the time to talk to us. Before we sign off, is there anything you would like to tell our readers?

Will Porter – I’d just like to use this space to thank the AvPGalaxy staff and community for being so consistently awesome. I’ve visited off and on for a long, long time – and pretty much daily during my time on the game proper. You’d be amazed by the number of conversations myself and Dion had that eventually boiled down to ‘What would everyone on the AvPGalaxy boards make of this idea/concept/problem?’. You’re a fantastic resource and clearly a great bunch, and ultimately your approval of Alien: Isolation (personally speaking) is the greatest accolade that the game could receive. [TLDR: ‘Love you lots’.]

Dion Lay – As Will says, AvP Galaxy was really helpful when we were making the game as well as interesting simply from a fan’s point of view! It’s really encouraging to see the passion for the series and the amount of work and detail people put into it and I think the major reward for the team has been the reaction to the game. We’re still sharing links on articles about it now!