In February of 2014, AvPGalaxy was invited to Creative Assembly Studios in Horsham, England. Dachande and Corporal Hicks attended to get their hands on the demonstration of Alien: Isolation, have a tour around the studios and to conduct an interview with two members of the  development team: Al Hope and Jon McKellan.

Below you will find the audio of that interview and a transcription. This interview was contributed to by the community of AvPGalaxy.net. Also see our hands-on preview and impression of the studio tour.

Corporal Hicks: I’m going to try not to repeat what you’ve been asked before. We wanted to talk about the origin and the evolution of Alien: Isolation – it’s been one of Britain’s worst kept gaming secrets with one of the Ministers of something revealing it on Twitter.

Al Hope: Minister of Culture. Kind of what was interesting was I was showing him around when we were doing the game. It was very early on and it was cool because he recognized it was Alien without us telling him what it was. Which was great, great for a MP to recognize the content but then I vividly remember saying to him “of course you can’t tell anyone about this, it’s a secret” so he said “I can’t tweet about it?” But then he got on the train and told everyone. I guess he alluded to what we were doing.

Corporal Hicks: Some of the early leaks and indications we got of the game showed it as third person. That’s obviously changed now to first person. Why did you go for the 3rd person approach first?

Al Hope: Yeah, when we first put together our short technical demo, that was in first person. Then for various reasons we tried the game out in third person and not least because to some extent survival horror possibly at the time was kind of kept in this kind of narrow box that had a certain set of criteria. 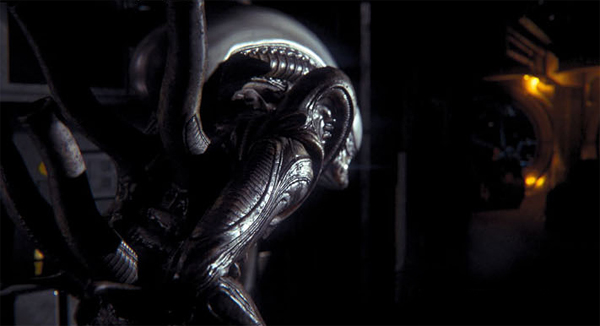 Al Hope: Yeah, and the big franchises were in third person and there was a kind of a thought that perhaps third person would be the best experience. It was kind of interesting because we worked on the game in third person knowing what it was like in first person because we had done the demo in first person and then over the course of development, I was getting people cornering me saying “Al, have you checked the game out in first person, this is amazing, you wanna see it“. So what people had been doing was hacking – people on the dev team – hacking the camera to effectively be on the nose of the main character and then walking around and I think it was kind of a real reminder with what we initially started with which was a first person direct experience and seeing our game kind of elevated by going first person.

I think it would have been a good game in third person but first person… It suddenly became something completely different. You suddenly had this one to one interaction with the world and the alien and it was no longer hunting the character; it was hunting you. And it wasn’t the character looking over or picking around objects; it was you and it was a very direct, very visceral, very intense experience and I think that’s what it seemed like. It just confirmed what we initially thought when we started this which was this experience these encounters and this world, you need to experience first-hand and actually you need to be doing it yourself.

Corporal Hicks: This one is a bit of a hot potato for the fandom – where does the story stand in regards to canon?

Al Hope: The game is very much inspired by the first film and we wanted to capitalise on everything we loved about the first film. From the look and feel of the world through to the type of alien that we were going to try and put on screen and to do that, we needed a story which went into position right after the first glimpse of the Nostromo blows up and whatever we were going to do was going to take place within that space right next Alien and as far away from Aliens as possible in a way just so that we could take advantage of that original source material. 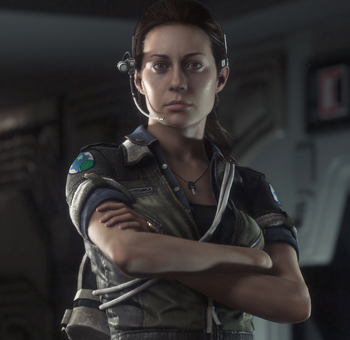 I think that’s kind of where this has come from. It felt like there was a character there who hadn’t really been put in the spotlight – Amanda Ripley.I think it’s just putting all those elements together.

I think, across all universes… not at least this one, I think the fans in the community ultimately decide what they feel is canon and so, I think for us, our inspiration is that original film and that’s where we’re coming from.

Corporal Hicks: People have been wondering why Amanda Ripley. What are you hoping to achieve with her?

Al Hope: We wanted to position our story and our world next to Alien and I think we explored a number of different stories but we kept on coming back to that question when the Nostromo went missing, really who would care enough, who would really want to find out what happened to it? Weyland-Yutani would obviously care. They say in the second film that it certainly has a value to them, a commercial value to them but who would care? And I think it was just knowing that Ellen Ripley had a daughter who hadn’t really surfaced at all. She would have probably cared, she would want to find out, she would want to know. But to what extent would she want, what lengths would she go to find out? It just felt that there was this incredible opportunity to just take up her story and see where it lead.

We wanted to take advantage of all the original source material but we also wanted an emotional connection to that first film, that it wasn’t just some guy from a company somewhere was investigating. We felt like that she was much more of a personal story, much more of an emotional connection if it was Amanda and we just kept coming back to that initial question and it felt like in Amanda is a very compelling character.

Jon McKellan: I think if we had gone down the route of it being a Weyland-Yutani exec they wouldn’t have the emotional reason to keep going through the scenarios. If it was just part of your job to find this thing and all hell breaks loose you can’t just go, “well … I’ll just step back” and not have the drive to go forward but being Amanda, she would have the drive to, she’s there for a reason, not just to fight the fight. She’s there to find out what happened. It matters to her so it gives a lot more weight to it.

Dachande: In the game are there any links to Prometheus such as Weyland Industry or is it pretty much separate from that?

Al Hope: It’s separate. We’ve been working on this game for quite a long time prior to anyone knowing anything about Prometheus. We really stayed very close to the first film, not really looking at any of the others in the series. So, we’ve kind of isolated – that was terrible! *laughs* –  from all the other films in many ways.

Corporal Hicks: One of the interesting design choices seems to have been the androids, they seem faceless. That’s what we’ve seen in some of the press previews commenting that they’ve not been given many features. Is that right?

Al Hope: They have features. So another new element to the world  of Sevastapol, the station that the game takes place on is Seegson, a kind of rival company to Weyland-Yutani and they have created their own type of android and they’re the android you see in the game. Ash is, at that moment, the pinnacle of android technology where Seegson are way behind and what you see is their best attempt at android technology. So they are lower scale and lower spec than Ash. They are something very different so they’re not a one for one reproduction of Ash.