“Dark Horse Comics took the industry by storm with its release of Aliens, a comics series that for the first time captured the power of film source material and expanded its universe in a way that fans applauded worldwide. Now, the first three Dark Horse Aliens series – Outbreak, Nightmare Asylum and Female War – are collected in a value-priced, quality-format omnibus, featuring nearly 400 story pages in full color. Written by screen and television scribe Mark Verheiden (The Mask, Battlsestar Gallactica) and illustrated with consummate skill by Mark A. Nelson, Den Beauvais and Sam Kieth, Aliens Omnibus Volume 1 is an essential piece of the Aliens mythos and a great entry point into the storied Dark Horse Aliens library.” 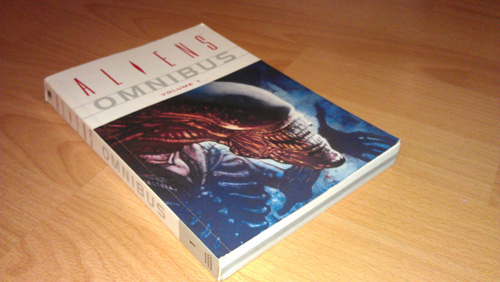 “Wilks was a space marine with a near-fatal flaw: he had a heart. Billie was a child, the only survivor of a far-flung colony outpost. Thrown together in the last hellish night of an Alien invasion, Billie and Wilks helped each other get out alive. Thirteen years later, Wilks is in prison and Billie lives in a mental institution, the nightmare memories of the massacre at Rim seared into her mind. Now the pair get a chance to be reunited. To go back to that outpost where it all happened, to finally end the business between themselves . . . and the Aliens.”

Outbreak is set 13 years after the events of Rim which left an orphaned Billie institutionalized and Wilks a damaged soldier with a burning revenge against the Aliens that slaughtered his squad and ruined his life. With the discovery of the co-ordinates for the Aliens “homeworld”, a squad of marines is assembled to retrieve specimens for the government to use as bio-weapons.

Wilks is recruited to head up the mission. Desperate to exact his vengeance upon the Aliens he goes, smuggling Billie along with him. Unbeknownst to everyone else, Bionational (aka the corporation), has secured a specimen of its own back on Earth. As could be expected, pretty much everything goes wrong for everyone.

Outbreak sets the stage for all Alien stories after it in which the Earth is devastated and infested by the Xenomorphs. While Alien Resurrection (arguably for some) destroys most of the continuity established in the comics, Outbreak is a must read in terms of establishing the state of play in all the future stories to be published.

It’s hard to pin where the main story of the series lies. Scribe, Mark Verheiden of Battlestar Galactica fame, switches focus between several different events and characters that ultimately culminate in the Earth shattering events of the conclusion of the series. The business of the book brings its problem in the form of characters being brought in, used and gotten rid of. Not all of them have the opportunity to shine and it becomes quite clear that for the most part, Outbreak is a story-driven venture.

That’s not to say Verheiden doesn’t give us some interesting characters. The heroes of the story are easily identified as Wilks, Billie and Bueller with Billie taking the forefront of development. Verheiden has fun with the dynamic he introduces between Billie and Bueller. While I imagine the majority of you will be aware of the reveal surrounding the couple, I don’t want to spoil it for those of you who don’t.

Verheiden adds a layer of depth to the story with the exploration of their dynamic and introvertive speculation between them. He contemplates the appropriateness of their relationship as Billie explores this aspect of adult life she’s never had chance to explore before.

For Wilks the focus lies on accomplishing his goal: revenge against the Aliens. But as the story ends, as his goal is achieved, what then?

Outbreak also introduces us to the idea of religious fanaticism that revolves around the Aliens. In the terms of this story, it’s about Salvajes who believes the Xenomorphs to be a new messiah. His sect is eventually the reason the Aliens are able to escape captivity on Earth and spread around the planet. This religious story idea becomes a recurring story device throughout other Alien series.

Verheiden also attempts to add more depth to the Aliens world through some minor exploration of the Alien “homeworld” (later reconned in further stories to be one of many hiveworlds) and to introduce an element of an ecosystem that the Xenomorphs are a part of. Outbreak also established that the Aliens communicate via telepathy.

Visually the comic looks like many released during the 90s. Coloured by Dark Horse Digital, Outbreak uses plenty of dark tones and colours to create a visual style consistent with the movies and is artistically reminiscent of the period it was released.

The biggest issue I had with the artwork was just how inconsistent it is with the visuals established in Aliens. At the time Aliens may not have been the staple of cinematic and science fiction history as it is now so the designs wont have been iconic but the inconsistency with the films is noticeable.

Where are the pulse rifles?! What’s with that dropship design? Why does the ship look like that? It looks wrong to the eyes.

If you want to get into the Expanded Universe of Aliens, Outbreak is a must read. Whether you like the elements introduced in it or not, it is an essential read.

“Wilks, Billie, and Bueller were the last survivors of a devastating assault on the aliens’ home planet. But their return to the solar system made them refugees once more, fleeing earth and its alien infestation in a desperate attempt to stay alive. Now, in an otherwise unmanned military transport, they hurtle through space, destination: unknown, while in the cargo hold they carry with them a legacy of death they thought they’d left behind!”

This story is worth the price-tag alone. Nightmare Asylum is my favourite Aliens comic and is definitely popular amongst many fans and for good reason! Den Beauvis brings a visual style rarely seen again in an Alien comic and never again in this length. His colours and brushwork brings a motion and tone to the artwork that just suits the Aliens franchise down to a tee.

Add to that detail that recreates the look of the environments we’ve seen before in Alien and Aliens and we’ve got a comic that feels like its creators did actually watch the movies. Small liberties are taken in some aspects – such as weapons – but they carry the look that seems as if they’re a development on the weaponry used by the Colonial Marines and now we actually have a comic that is actually developing an established universe. 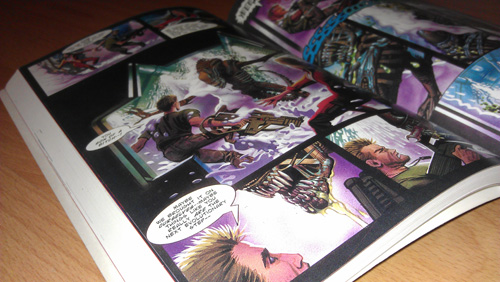 Whilst I realize that obviously the stories had to re-conned to fit in with Alien 3, you can really see the likeness to Michael Beihn in Wilks.

Mark Verhedien picks up the story after the end of Outbreak with Wilks, Billie and Bueller helpless aboard an automated drone ship, their final destination unknown. Eventually they find out they’re heading to a military outpost carrying a cargo of Xenomorph-infected humans. Of course, the Xenomorphs birth and the tired survivors are forced to deal with it.

We eventually find ourselves on the military outpost run by a crazed military general, Thomas Spears, performing experiments on Aliens, trying to weaponize them. I won’t get into too much detail but as we can expect it all goes to pot.

Like Outbreak before it, Nightmare Asylum established other archetypes for future Alien stories (*cough* Alien Resurrection *cough*) in the form of the military characters and situations surrounding weaponizing the Aliens. At the time, when we hadn’t read numerous variations of the story, I can imagine this having been a rather thrilling story as at times it looks like Spears has genuinely succeeded. 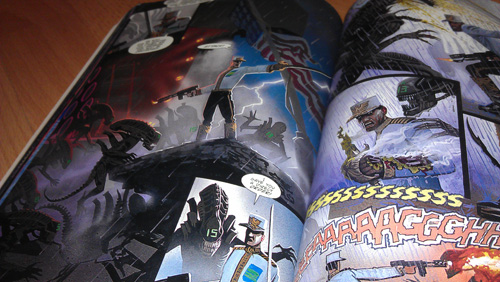 I don’t think the story is quite as deep as Outbreak was at times but Nightmare Asylum is definitely a thrill-ride, much in the way Aliens was. It deals with the wider picture of the consequences of the Aliens infestation of Earth but still retrains a smaller focus on Billie as this is where the story of the trilogy starts to become more about her.

We watch as she starts to develop a connection to a little girl she is watching over the transmissions from Earth. Some people on Earth are still transmitting videos of what is happening on Earth and Billie becomes fascinated with one small group and a little girl in that group, seeing herself in that girl.

The aftermath of her relationship with Bueller isn’t a primary focus of the story but it is dealt with and that storyline and character arc is wrapped up by the end of Nightmare Asylum.

It’s a fantastic comic and this alone is worth picking up Volume 1.