Dr. Timothy Hoenikker arrives on Pala Station, a Weyland-Yutani facility. Lured there by the promise of alien artifacts, instead he finds a warped bureaucracy and staff of misfits testing the effects of Xenomorph bio-materials on living creatures. Unbeknownst to the personnel, however, there is an infiltrator among them whose actions could spell disaster.

Also on staff is Victor Rawlings, a former marine who gathers together other veterans to prepare for the worst. As the personnel receive a delivery of alien eggs, the experiments spin out of control, and only the former Colonial Marines can stand between the humans and certain death.

I don’t think it’s a secret that I’ve really been enjoying Titan’s Alien novels. As of Alien: Into Charbydis, Titan has now been responsible for publishing the majority of my favourite Alien novels. Even the ones that don’t sound like they should work – such as Alien: Out Of The Shadows – have been solid, entertaining reads.

But one area where Titan seem to falter for me is in their novels that are related to video games. Alien: Isolation’s novelization didn’t come close to hitting the same notes that the game did, and Predator: Stalking Shadows just didn’t work for me. So I admit I went into Aliens: Infiltrator, a prequel to Cold Iron Studio’s upcoming Aliens: Fireteam Elite, with some worry and trepidation. Could Weston Ochse and Titan get out of this tie-in funk?

Ochse had previously written for both Alien and Predator, having contributed a short story to each’s anthology. I really did not like his Alien short, Zero to Hero, but Ochse’s contribution to Predator, May Blood Pave My Way Home, was one I really enjoyed. 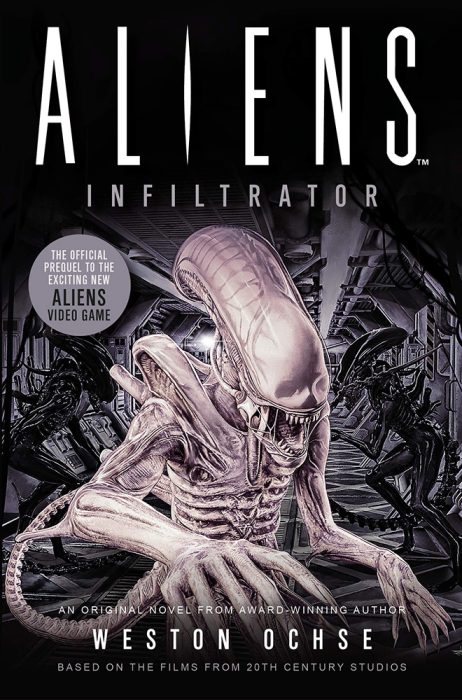 So did Infiltrator step up? I thought so, but only marginally. And it’s made much more frustrating for me because of how many fascinating concepts got crammed into the book. Aliens: Infiltrator suffers much in the way I thought Predator: Stalking Shadows did, where it seemed to want to tell lots of mini-stories but not be an anthology.

It read as if Ochse had been handed a checklist of concepts that had to be fit into the novel, but none of them are really given the time to breathe, or make an impact. At least there’s some through-lines as the narrative progresses, but they still feel so undeveloped and wasted.

In particular, I would have loved to have spent more time with the revelation that one of the main characters knew one of the people that was being used as a host. Instead, it was a quick chapter where we’re given a reason (oh, she became a murderer, it’s okay then I guess) to not really dwell on the inner conflict, and her Alien child is referred to by her name. I wanted so much more of that! This could have been a whole novel on it’s own, and an extension of the elements that Aliens: Dust to Dust started to explore.

The awesome acid resistant armour that is the shining success of Pala Station’s scientists? It takes until about three quarters of the book before this success is explained and even then it felt so wishy-washy. I’ve been dying to see the Aliens explored for other scientific purposes for so long and it’s one of the many things Aliens: Infiltrator wants to do, but instead it becomes yet another victim of too many plot elements.

I said earlier it felt like Titan or Cold Iron had handed Ochse a checklist of cool concepts? I’m irritated by the book because there’s so damn much on that list that I wanted to see happen! But I didn’t want them crammed into one novel, so much so that it felt overstuffed as a result.

A conflict between Aliens and some other accelerant creature that we were robbed of when it was cut from Alien: Covenant?! Yes, please! But with Infiltrator we throw in a third, barely have any interaction between them, and the actual conflicts our characters have with them are unsatisfying and uninteresting.

And don’t even get me started on the characters and some of their actions. One of the most frustrating parts of the novel for me is when one of the aforementioned creatures escapes, and not a single character seems to give a shit that there’s a dangerous killer creature running around the station for days!

There wasn’t a single character I found interesting, either. Everyone seemed to flip-flop around their motivations, and I didn’t find a single character arc engaging. The closest I came was Cruz, former Colonial Marine turned PTSD afflicted scientist, who managed to get some closure.

But he didn’t interest me. I often remark that a character doesn’t need to be likeable to engage with me, their just need to catch my interest, and that didn’t happen with a single character in this book. We had a cast of scientists who apparently had nothing but shady pasts, and it’s barely a footnote! That could have been a whole other dimension to these people! Outcast scientists.

We’re also given a character who develops a pheromone camouflage so that people can move around amongst the Aliens without worry. Awesome! Something that the comics have touched on, but the novels haven’t really delved into this one. I love it.

He then seems to delve into the wrong end of sanity as a result of an outbreak and an impromptu field test of his formula, only to flip-flop back to being perfectly fine with a “oh, I was just wondering if they’d bother me if I made a racket too.” What?!

I also didn’t know it was possible to hate a character for being useless as much as I did with Infiltrator. The main character, Dr Timothy Hoenikker, serves absolutely no purpose in this novel other than to be uninformed eyepiece for the audience. He’s a xenoarchaeologist, who is shanghaied into working on a team of biologists and biochemists…even though anyone who knows anything about the marketing for the game has seen all the Engineer ruins, something that the novel goes to some lengths to tease and hide.

He has nothing to offer the other scientists, and is compared to being relegated to just behaving like an intern by the characters. We get one chapter where Hoenikker is shown how to handle a weapon – because why not? It gives us a chance to have a chapter hearing about the Pulse Rifle. And when we’re in a combat situation, the first thing Hoenikker does when given a weapon? Look down the barrel!

I have to wonder if Ochse was trying use an Alex White experiment of making me just loathe a character, because if he did he really succeeded there. I loathed Hoenikker. He got that kind of visceral reaction from me. 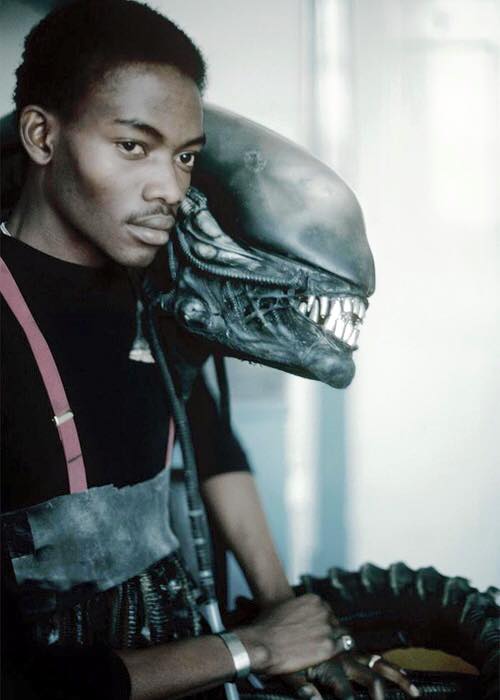 Bolaji Badejo gets a character named after him!

Another element that I was disappointed with was how hugely distracting it was that so many of the characters in Aliens: Infiltrator were named after people associated with the series, including a fellow author. At a guess, I’d estimate over half the major characters in were named after cast and crew of the various Alien films. I don’t mind a good nudge-nudge-wink-wink every now and again but it was just way too much in here.

Something small that I did find myself quite enjoying was the way that Infiltrator had the Weyland-Yutani staff on Pala treat their job titles like ranks. This is exactly the kind of behavior that some corporations have, and I think it’s really fascinating. There’s just something about when a none military entity tries to take itself so seriously.

Honestly, I think I’m just so frustrated by Aliens: Infiltrator because it plays with so many things I’ve wanted to see get more page time only to throw them away. And selfishly those elements are the only things that nudge this over the other two tie-ins.

I wanted so much to like this book, but it just really just wound me up so much with how disappointed I was in the way so much of it was handled. I just don’t think Titan has escaped the video-game tie-in curse yet. This is one that I don’t think I’ll be coming back to for quite some time.