“Ataegina was an isolated world of medieval castles, varied cultures, and conquests, vibrant until the demons rose and spread relentless destruction. Swarms of lethal creatures with black husks, murderous claws, barbed tails and dreaded “tooth-tongues” raged through the lowlands, killing ninety percent of the planet’s population. Terrified survivors fled to hidden mountain keeps where they eke out a meager existence. When a trio of young warriors discovers a new weapon, they see a chance to end this curse. To save humanity, the trio must fight their way to the tunnels of Black Smoke Mountain–the lair of the mythical Demon Mother.”

With the February 25th release of Aliens: Phalanx, Titan Books have published 11 original books set within the Aliens universe over the course of the last 6 years. And aside from just one or two misses, I’ve been really enjoying Titan’s outings!

But leading up to the release of these novels, I’ve never been as excited as I have been for Aliens: Phalanx! I absolutely love it when a story tries to do something different with the Alien series. Sometimes that doesn’t work – like Aliens: Bug Hunt – but other times I’ve found myself having an absolute blast like with Aliens: Music of the Spears (though that’s not a Titan book).

Author Scott Sigler has previously written for the Alien universe, contributing the short story Dangerous Prey to Aliens: Bug Hunt. It was one of just a handful of shorts in Bug Hunt that I thoroughly enjoyed, and it clearly demonstrated Scott’s interest in putting a different spin on the Alien series.

Don’t go into Phalanx expecting a full length novel told from the Alien point of view, but the synopsis clearly paints a much different picture than what you’re used to with Alien stories. I wont go into detail around the setup, but it all works and it works so damn well!

I went into Phalanx with such high expectations based on the synopsis and Dangerous Prey, and Sigler just met me with full force and sucked me right in. At 509 pages, Aliens: Phalanx has the distinction of also being the longest Alien novel (though technically Phalanx is actually titled Aliens, not Alien). And I just flew through it in a weekend, something I last did while reading Alien: The Cold Forge. That’s the level of quality I put Aliens: Phalanx on.

Vikings vs. Aliens. A panel from Aliens: Stalker.

Let’s put this straight out there – Aliens: Phalanx leans very heavily into the world of shields and swords (obviously). So for those out there who just straight up dislike the setting, this may not be the book for you. But for the readers out there who are willing to give something different a chance, Aliens: Phalanx is just proof that with a fantastic writer, Aliens can be done differently, uniquely and fantastically!

The obvious question when it comes to setting Aliens within a world of broadswords, is how the hell do these characters stand a chance against an Alien? And that is the challenge that the characters in Aliens: Phalanx deal with on a daily basis.

Ataegina is a place that is moulded by the presence of the Aliens. The lives and cultures of the characters rotate around surviving in a world that is dominated by the constant threat of the Aliens – or demons as the novel refers to them. Most who encounter the Aliens don’t survive to tell the story. The scant handful who do are revered as heroes, and usually come out of the encounter with severe wounds.

Sigler made the Aliens feel like the constant threat that they should be. Obviously it’s hard to tell a story with continuing characters in this setting so the Aliens don’t actually appear all that often. However, what was fantastic was that even if the Aliens weren’t constantly showing up, their presence was always felt. It was felt by the characters at all time, and it was reinforced within the text by how the world-building was shaped around the Aliens.

Sigler paints an incredibly detailed and vivid world, putting so much effort and detail into the world-building of Ataegina. Even the smallest details go towards establishing the world that everyone lives in. A small comment about the roots with extreme pain-relief properties highlights the future that Ahiliyah, our main character, is not sure she ever wants to reach. What kind of life is that?

Every encounter with the Aliens mattered too – whether it was death or victory, there was always a cost. The Aliens are fucking deadly in Aliens: Phalanx! Limbs are lost and faces are disfigured. The acid in particular was something that Sigler used very well and played a huge part in the story.

I want to go into so many details about the book, but out of respect for Sigler’s request in the foreword and to not spoil it for those who haven’t read the book, I’ll avoid the specifics and try to be as vague as possible. I will say that the obvious issue is dealt with – how the hell does this medieval setting even work? It’s addressed.

I actually think it would have worked a little better had the answers not been so definitive. The details are still vague, but I believe Scott could have gone a little vaguer and it would have still worked very well.

Of particular interest with Aliens: Phalanx was not just how the medieval setting would work, but it how the human characters would handle the Aliens within the confines of the setting and I think Sigler pulled it off so damn well. It’s not just a case of how to the characters can expect to survive, but it’s in going steps past just immediate survival that make Aliens: Phalanx stand out even more than your average Alien story. 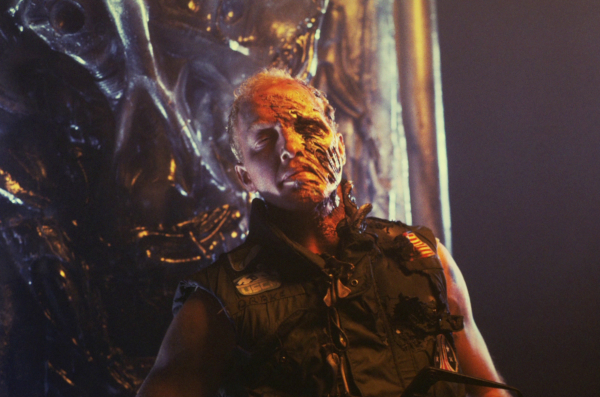 Drake demonstrates the consequences of close quarter action with an Alien.

I honestly never expected anything further than that the title implies – ancient tactics – so when the characters started looking further I was pretty damn surprised, and pleasantly so. Without spoiling it, Phalanx has echoes of Aliens: Labyrinth and I loved it!

Another aspect of the novel that I really love was its characters. While not the deepest shades of grey of Alien: The Cold Forge’s cast, none of Aliens: Phalanx’s characters were never simply black or white. Even the novel’s antagonists I could understand. I never doubted that even when their intentions might be selfish, they were also acting for what they considered to be for the best.

I particularly enjoyed Ahiliyah’s arc throughout the book. She was constantly worried about the future, a theme that defines much of Aliens: Phalanx. The youth of Lemeth Hold (one of several settlements in Atagina) are often employed as runners, a task which involves risking their futures travelling between settlements as traders of goods and information.

Unlike the other settlements, for the inhabitants of Lemeth it is an obligation. For the males its 5 runs, for females it’s 10. The runners worry about the future, but not only in the terms of simply surviving these obligations, but in their futures in how they fit into their own society after they’re no longer expected to run.

This concern for the future extends into so much more and was something I found myself latching onto it, because no matter how old we get we’re still concerned about tomorrow. Our own concerns may seem more mundane when compared to the existence the characters of Aliens: Phalanx are living, but it was a theme that I found really resonated with me.

I really want to just dig in and talk about so many specifics of Aliens: Phalanx! But I’m going to have to leave that for the podcast once more people have read the book. However, I just wanted to emphasize some of these elements, and make it really clear that I really recommend this book. 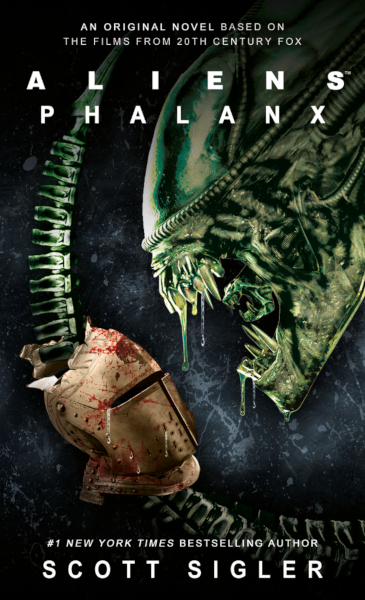 Once again I find myself asking – no, begging – Titan to step up their cover art game. Fortunately the physical book doesn’t look as bad as the online images suggested, but these books deserve so much better. Talent like Alex White or Scott Sigler deserves the likes of Dave Dorman or Raymond Swanland to entice people to pick up these books up.

Aliens: Phalanx is a compellingly written and truly unique take on the Alien universe. Sigler crafted a complex world, with fascinating characters and made the Aliens feel like a constant force of dread throughout. Sigler is a name I am truly eager to see grace the cover of another Alien novel!

This is a novel I’m eager to re-read. And it’s another I can’t help but just recommend to Alien fans out there. Do yourself and pick up this novel! Titan has another winner on their hands with Aliens: Phalanx.