From master storyteller Gabriel Hardman, a terrifying examination of why we fear the xenomorphs. In deep space, the Trono colony on the planet LV-871 finds itself under attack by mysterious and deadly creatures of unknown origin. Emergency evacuations are ordered and shuttles are taking off as the massacre sweeps the colony. All that stands between 12-year-old Maxon and his mom making it to the safety of the spaceport… is a horde of Aliens! You’ll be gripping the edge of your seat as a mother and son fight for their lives against the deadliest monsters in the galaxy.

Following on from 2017’s Aliens: Dead Orbit, Aliens returned to comic form in April 2018 with the first issue of Aliens: Dust to Dust, which after some delays finished its four issue run early this year in January 2019. As with Dead Orbit, Dust to Dust is another series in which the writer and artist are a single person; in this case, Gabriel Hardman.

I have to say I’m really enjoying seeing these recent series’ in which there’s a single creative voice driving both the narrative and the artwork. This is continuing with Johnnie Christmas with the current William Gibson’s Alien 3 too. Unlike Stokoe with Dead Orbit, Hardman illustrated and inked but the colouring was provided by Rain Beredo.

But that’s not to say this means Aliens: Dust to Dust has any less of a cohesive creative voice as Beredo’s artwork perfectly complements Hardman’s narrative and his line work but more on the art later! 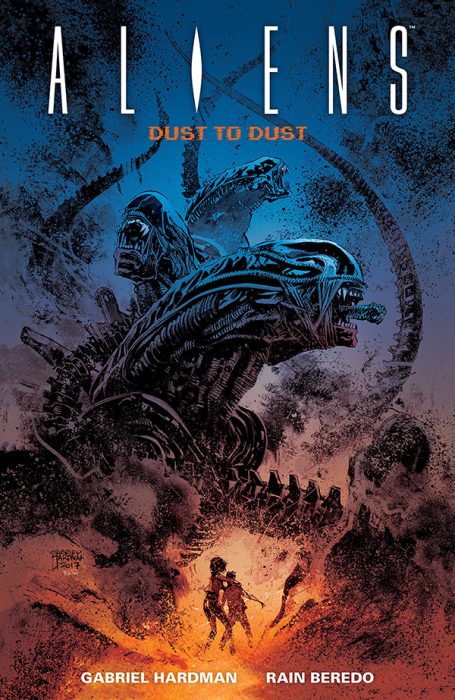 Aliens: Dust to Dust opens in the midst of an Aliens outbreak on the Trono colony on LV-871, when the young Maxon Cregar (Max) is woken up by the sounds of other colonists attempting to fight off the Aliens. He soon discovers his mother with a facehugger on her face. After she wakes up, the pair attempt to join the escape shuttle evacuating the colony.

Something I really enjoyed about Aliens: Dust to Dust was how we were just thrown straight into the thick of it. There’s no slow build up, no pages of exposition and no real understanding of the situation the characters were in. They were just in the midst of Aliens infestation and attempting to get out of it.

I found that approach to be actually pretty refreshing. That said, an explanation eventually came in the closing pages of the last issue and personally, I would have been perfectly fine without it in the story. I don’t think it ultimately added anything to the series but it didn’t harm it either.

When speaking about the series in interviews, Gabriel Hardman often talked about how he deliberately wanted to use a younger character as the main character to reinforce a feeling of powerlessness and a lack of understanding. It fit quite nicely with the general lack of background with the situation.

I didn’t find any of the characters in Aliens: Dust to Dust really jumped out at me. No-one felt like they were a memorable addition to the roster of Alien characters – the Captain of the Evac shuttle didn’t even get a name.

Hardman did something interesting with Maxon that I was quite fond of, though. Though he’s the main character, we learn very little about him over the course of the story. He obviously has the drive to survive and what those around him say really does seem to affect him but he vocalises very little of his thoughts.

Instead we have moody panels focusing on his face or on Maxon as he is going about doing things. I found this had me imagining what was going on his mind. It put me in his shoes, and made me imagine how I would feel about that situation.

I wasn’t a huge fan of the surprise reveal that one of the characters was actually a synthetic. Despite some clues, I hadn’t actually been expecting it and I didn’t feel it added much to the story at all.

It wasn’t like Samuels in Isolation where it just was, it felt like Dust to Dust’s reveal was supposed to have been a bit more of a shock and it just didn’t pay off correctly to me. That said, the panel with Maxon holding onto the synthetic head was incredible and that alone was almost worth the “surprise”. 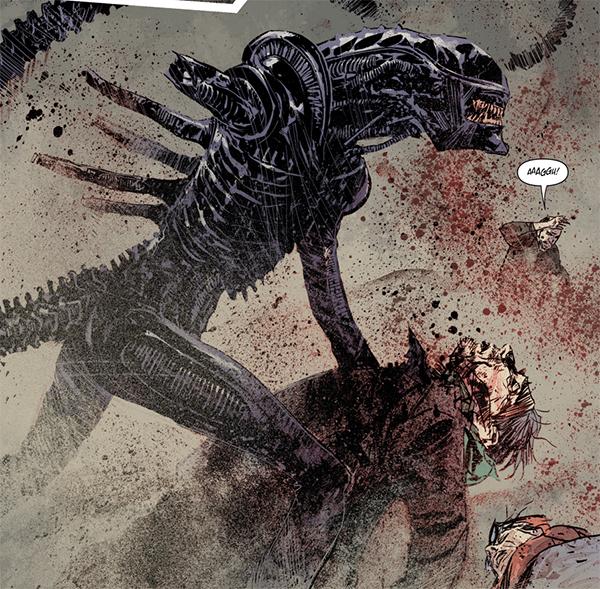 Another thing I loved about this series was that it was set on a colony that was actually functional and developed. There’s a spaceport, there’s buildings and streets and they don’t all look like prefabricated structure. It was really nice to see a more fully realised look at one of the developed colonies in the Alien universe. Unfortunately, it was something of a short look but one I enjoyed none-the-less.

I was also particularly fond of Hardman’s design work in Dust to Dust. An issue I have with a lot of the older comics is they don’t necessarily look like they actually fit in the Aliens universe and that is down to how a lot of the technology and the environments look.

Dust to Dust slots right into the Alien universe. Everything in it looked like I imagined a more developed colony world would. Even down to the small touches like the support framing around Maxon’s bed looked perfect. It’s great world-building.

One particular aspect of Aliens: Dust to Dust that I can be certain will cause some stir within the fandom is the exploration of how much the Alien truly inherits from its host. We’ve seen the obvious with the PredAlien and the Runner, but could it take more than physical traits? That’s an angle that Dust to Dust plays with.

Having birthed from Maxon’s mother, the primary Alien in Dust to Dust is seen to be killing the other human characters around Max, almost as if it was actually defending him. This is something that is picked up and speculated on by some of the other characters in the series.

During my initial read through of the series, I felt like the final moment between “Mom” and the Queen was Hardman saying “yep, it’s Mom after all.” However, when we spoke to Hardman for the Podcast, he told us that he hadn’t intended to offer a definitive explanation one way or the other.

Having had the chance to speak to Hardman and re-read the series, I can see where the ambiguity lies. Despite seeing to defend Maxon, Mom is also shown attacking him. It’s just that final moment that I can’t quite explain.

I actually really like seeing this aspect of what the Alien inherits experimented with. It’s something that has been speculated for some time in the fandom. In particular if the Alien did really rape Lambert in Alien, perhaps it was because of some lingering attraction inherited from Kane? Are Aliens born from humans smarter than those born from animals?

It wasn’t something I ever expected to see used in the Expanded Universe and while I recognise it’s not going to be to everyone’s tastes, I actually enjoyed seeing it toyed with. I think there’s other interesting angles to do things like the Aliens seeming to defend characters – perhaps scenarios such as the character being infected and not realising it? 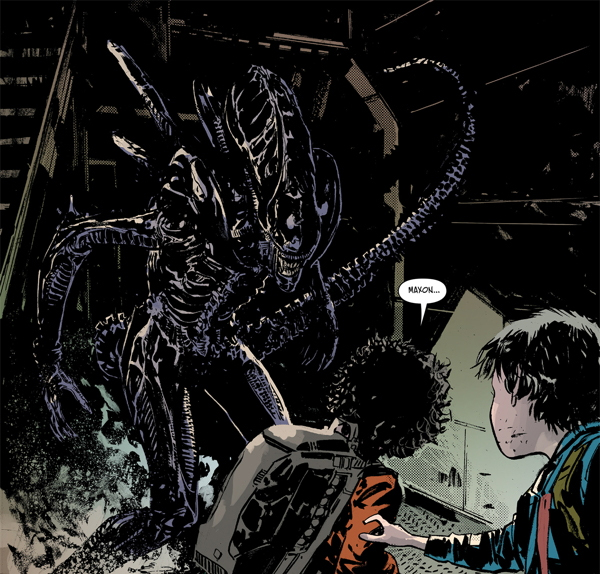 Something that I think doesn’t get used enough in the expanded universe is the Alien’s acid blood. It was really nice to see that get used in Dust to Dust, particularly when Maxon’s mother ran over a facehugger and when an Alien’s acid blood caused the hull of the escape craft to breach. I really do get a kick out of moments like that.

I was also stoked to see Hardman give “Mom” a distinctive appearance. For all intents and purposes “Mom” was just your average Alien warrior but I get such a kick out of seeing them given distinctive injuries like Grid in AvP. It’s also great to see the Aliens function with huge injuries too.

Aliens: Dust to Dust is yet another series with very solid visuals. Gabriel Hardman and Rain Beredo made an incredibly effective team. I found the entire colour pallet to be appropriate to the Alien universe and I was particularly fond of the gritty and dirtiness that the duo gave to the stormy environment.

There’s great use of blacks and shadows in the series too. I especially loved some of the panels of the Aliens emerging from the storm or the darkness, or even disappearing into the shadows and the hive structure in the last panel.

Aliens: Dust to Dust is yet another solid series from Dark Horse Comics. It looks gorgeous and like the recent series, there’s so many panels in this I’d love to have printed out and hung up. The series has a straight forward plot that keeps on driving forward, ensuring I was never bored.

It was also great to see Gabriel Hardman play with some other aspects of the Alien and take a fresh approach with the story itself. From Corporal Hicks here at Alien vs. Predator Galaxy I award Aliens: Dust to Dust with a 7.5 out of 10!