The Aliens Colonial Marines Technical Manual was originally published in June 1996 and was written by Lee Brimmicombe-Wood with contributions from countless other people. The book has become quite rare to find as it’s been out of print for a long time. Now, Titan Books are reprinting it along with a few other classic Alien books (including The Book of Alien). I guess you could best describe the Tech Manual as the ultimate wiki for all things relating to the colonial marines equipment, weapons and vehicles seen in James Cameron’s Aliens. 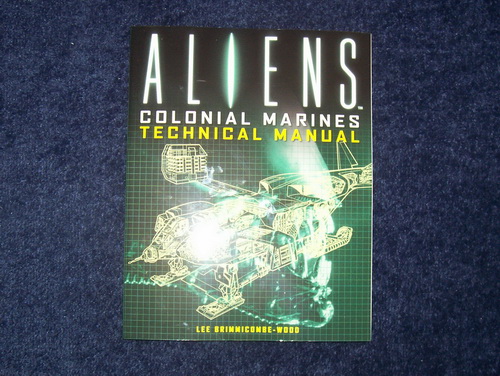 First, I’ll give you a little background to the book. It originally started as an idea the author had in the late 80s. A few years later, he began doing some freelance work for Dark Horse which included writing some articles for the Aliens magazine. He used some of his ideas for the Manual in some of those articles and the reactions to them were positive. Dark Horse approached them to do a comic series based on this work. Unfortunately, a bit later, Dark Horse closed their UK offices and with it went the Aliens Tech Manual. He found another publisher called Boxtree who were willing to publish the book. The author hit another snag when he found out that Boxtree only had the license to publish books for Aliens, and not Alien or Alien 3 so a lot of material and ideas had to be cut out of the manual. Some elements from Alien made it in there such as the Nostromo as it was mentioned in Aliens. But a lot of the final chapter included parts about Alien 3 and theories of the alien morphology also had to be cut out.

There are seven chapters in total. The first one is called ‘The United States Marine Corps’ and gives a little background to the organisation and outlines the various divisions. Their insignia is detailed as well as the recruitment process. 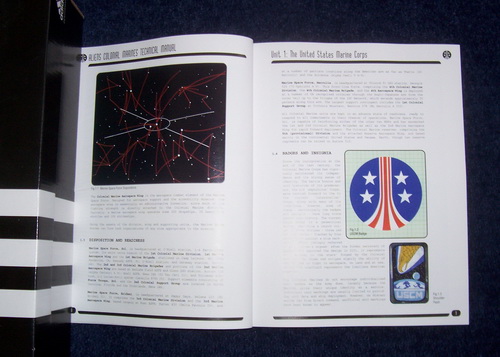 The second chapter is called ‘Colonial Marine Infantry’ and details the various weapons and equipment a Marine has at their disposal. All the weapons from Aliens are there such as the Pulse Rifle, Smartgun, Flamethrower, Pistol and Scope Rifle. There isn’t just a general description of them either. It goes into great detail into how effective they are, what sort of ammunition they can fire and even how to fire them. It also gives exact measurements, how big they, how heavy there are, how much ammunition they can hold. There are also descriptions of the armour and attachments such as the Shoulder Lamp and Helmet-Mounted camera. 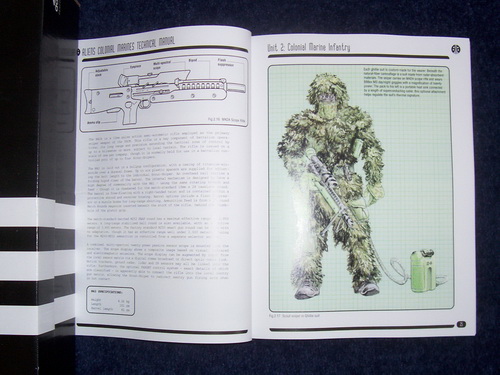 The third chapter, ‘Aerospace Operations’, covers everything related to the Dropship. There are countless sections about it including information about the engines, flight characteristics, sensors. There are detailed schematics of what each part of the Dropship is for with details about the ship’s various weapons with full specifications of the missiles and rockets. We never saw any weapons fired from it in the movie though but it’s reasonable enough to believe it had a weapons system. 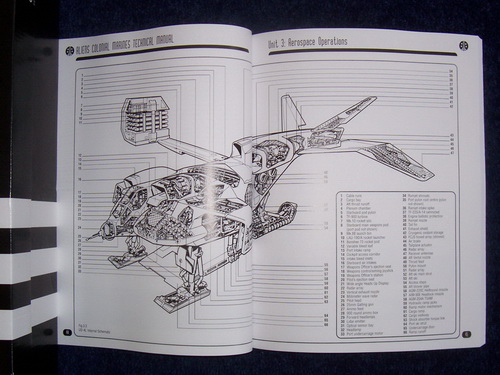 The fourth chapter is called ‘Heavy Weapons and Armor’ and contains information about the Armored Personnel Carrier (APC) we saw in Aliens. How heavy it is, what it’s made out of, how many passengers it can carry, its weapon system. It’s all there. The section also includes Tanks, anti-Armor weapons, Aerospace Defence weapons and Artillery weapons. None of which we ever saw in Aliens but again, it’s reasonable enough to believe the Colonial Marines would have this equipment at their disposal. As usual, there are detailed files about all the new weapons and vehicles. The chapter concludes with information about the Sentry Gun and Mines. 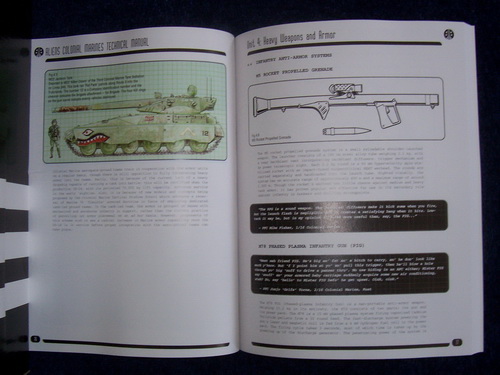 The fifth chapter, ‘Combat Support’, includes information about the Android. What roles they have in the Colonial Marines, how they are powered, how long they last etc. There’s also a section about the iconic Power Loader including how much it can lift and how it all operates. The chapter includes information on the Motion Tracker, communication equipment and the possible use of Nuclear, Chemical or Biological weapons. 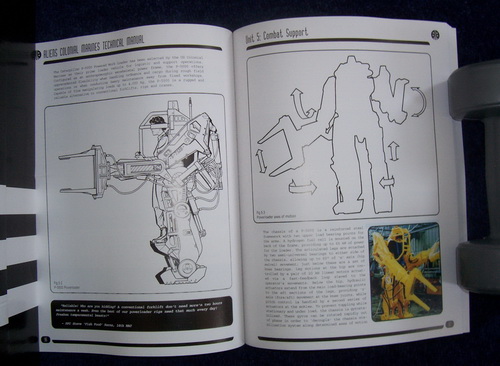 The sixth chapter is called ‘Space Transport’ and is about the USS Sulaco. Like the Dropship, the section includes full specifications about how big it is, how it is powered with schematics. There are also sections about its Life Support system, weaponry system and the EEV we saw at the start of Alien 3. The chapter ends with a fictional account of space flight, tactics and weapon use. 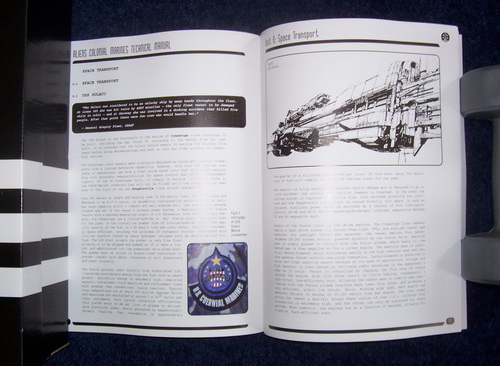 The final chapter, ‘Aliens’, is about the creatures we know and love. Unfortunately, the chapter is the weakest part of the book. It mainly contains a transcript of fictional quotes from people that reference the events in Alien and Aliens. They do try to delve into the biology of the creatures but it’s poorly written and doesn’t make a whole lot of sense. Especially when you compare it to how the rest of the chapters are presented. If you look at the Anchorpoint Essays website, that’s what this chapter should have been like. But then again, should there even be a section devoted to the Aliens when the book is supposed to be about the Colonial Marines? In between the quotes, there are sections for the Zeta 2 Reticuli star, and the Narcissus from Alien. For Aliens, the Buggy (seen in the Special Edition of Aliens) is detailed as well as the Atmospheric Processor. Though, I have to wonder, why mention these things in this chapter at all. 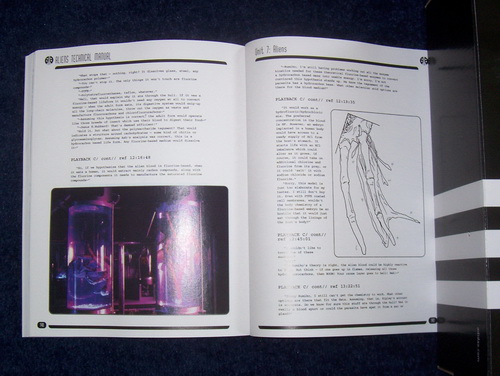 There are more fictional quotes littered throughout the various chapters but most I never really paid much attention to. The book also contains a lot of pictures but unfortunately, there’s very few from the Aliens movie. There’s concept art and production stills, and even drawings the author did himself of weapons and vehicles. I would have preferred some actual shots from the movie but I heard that 20th Century Fox refused to give them any, particularly any that included the actors for legal reasons. I suppose another subject of discussion is whether or not the Tech Manual is actually canon. It’s so detailed and concise that many people believe it to be. 20th Century Fox did supply the author with some production notes and sketches but the vast majority of the book is basically fan fiction. It’s all very realistic though and not outside the realm of possibility. 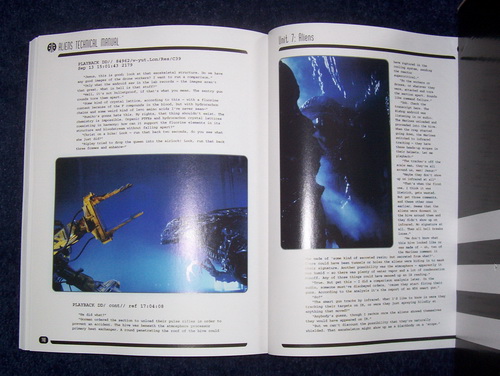 Overall, I think the Tech Manual is the best resource for learning about the Colonial Marines. I can’t honestly imagine how much time and effort went into making something like this. I’d probably say the book is for hardcore fans of the movie only though. Or for modellers, costume designers or people researching something about it. I love the movies but I must admit the book is a bit overwhelming for me as there’s so much information to take in. Does the average Joe Sixpack really need to know the intricate details of the Colonial Marines weapons and equipment? Probably not but it’s still an amazing reference guide for Aliens.