“Ellen Ripley finally returns to Earth, only to discover that LV-426 – where the crew of the Nostromo first came into contact with the deadly xenomorphs – has been renamed Acheron.

Protected by Colonial Marines, the colonists seek to terraform the storm-swept planet against all the odds. But in the face of brutal living conditions and the daily struggles of a new world, there is humanity and hope. Anne and Russell Jorden – two colonists who are seeking a fortune that eluded them on Earth – are expecting their firstborn child.

The birth of Rebecca Jorden, known to her family as Newt, is a cause for celebration. But as the colony grows and expands, so, too, do the political struggles between a small detachment of Colonial Marines and the Weyland-Yutani scientists posted on Acheron. Willing to overlook their orders in order to serve the Company’s interests, these scientists have another far more sinister agenda – to covertly capture a living Alien.

The wildcatters discover a vast, decaying spaceship. The horseshoe-shaped vessel is of particular interest to Weyland-Yutani and may be the answer to their dreams. But what Anne and Russell find onboard proves to be the stuff not of dreams but of nightmares.

This terrifying, cinematic, multicast dramatization – directed by the multiaward-winning Dirk Maggs, best known for his adaptations of Douglas Adams’ Hitchhiker’s Guide to the Galaxy and Neil Gaiman’s Neverwhere for the BBC – is the sequel to Audible Original’s Alien: Out of the Shadows (nominated for Best Audio Drama at the 2017 Audies).

For the first officially sanctioned Alien Day in 2016, 20th Century Fox, Audible and Dirk Maggs surprised us with an audio drama adaptation of Tim Lebbon and Titan Book’s Alien: Out of the Shadows. Out of the Shadows was the first of a relaunched series of Alien novels from Titan and for their first Alien audio drama Audible and Maggs adapted that first. And it was awesome!

I’ve enjoyed the audio drama format for a while but my favorite franchises never really had a big presence in that world which is something I was often disappointed about. Utilizing a great cast, some fantastic sound effects and a great adaptation of a solid foundation, Dirk Maggs gave me an experience I’d been waiting for for a long time. 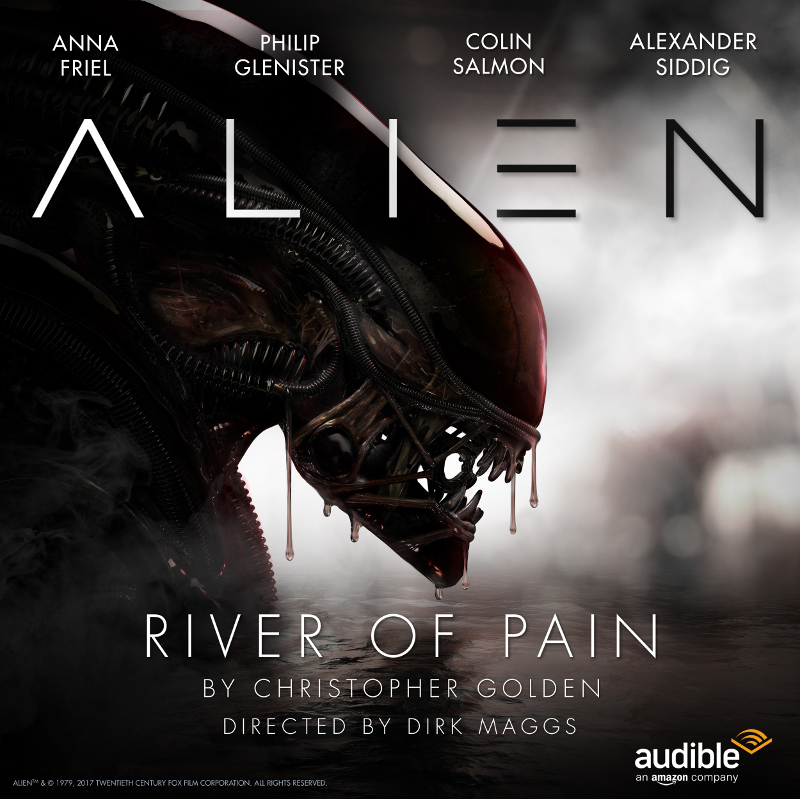 Granted, it has been some time since I last read the River of Pain novel but from what I remember, Dirk Maggs’ adaptation remained faithful to Christopher Golden’s original novel, without any massive changes. So those of you who had issues with the original novel will find the same issues here. I’m afraid we still have Colonial Marines stationed on Hadley’s Hope prior to Aliens.

I think the big theme of the frontier life is still carried through really nicely. We get a very nice sense of the difficulties all the characters are facing colonizing this harsh world and I think the actors did a great job bringing that element of the story to another format.

As with his work on Out of the Shadows, there are some very minor changes made to accommodate the change in format. For example, Newt recaps events out loud to Casey.

There’s even some nice continuity between the audio dramas where we have references to the Seegson module installed on the Narcissus which was a difference to the original novel to allow Ash to have an audio presence and explain his change of actor. That put a bit of a smile on my face.

I was really taken with the main cast of Alien: River of Pain and their portrayal of the characters. Something I really like is that Daggs does go to the effort to cast Aliens alumni in new or returning roles. River of Pain sees William Hope return as Lt. Gorman and Mac McDonald as Al Simpson (he also played a different character in Out of the Shadows). 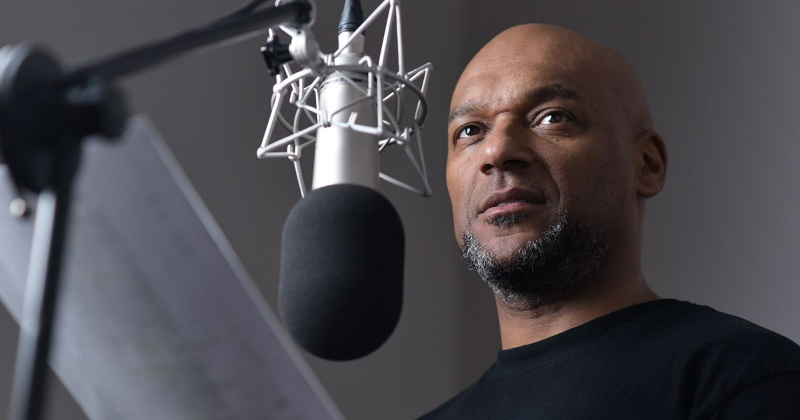 Alien vs. Predator’s Colin Salmon (Maxwell Stafford) returns to the Alien universe as Demian Brackett, a Colonial Marine Captain who is arriving on Hadley’s Hope to take command of the existing Colonial Marine presence.

I thought that Salmon brought a fantastic presence to the role and really helped bring out that dedication and likeability that Christopher Golden had written into his character in the novel. He brought a real sense of authority to the character and humanity that made it really easy to connect with Brackett and the difficult journey he faces throughout the story.

In terms of new actors, I was especially fond of Anna Friel, who takes over from Holly De Jong as Anne Jordan. I was only really aware of Friel through her role on the far too short lived and charming TV series, Pushing Daises. And I think she absolutely nailed it.

As with Colin Salmon and Bracket, Friel made Anne feel so human and really brought complexity to the character. I found her to be such a compelling lead and was really able to draw me into the personal struggles that Anne was facing.

I also thought Marie Doherty was simply amazing as Newt. There’s something of a stigma around child actors but I thought Doherty was really natural and brought a strong sense of vulnerability to Newt and made it easy to really connect with the new actress, to the point where it felt devastating hearing her last few words as the story was coming to a close.

There’s actually quite a sizable and talented cast with everyone doing a really good job. I wouldn’t say any single actor stood out to me in any negative way. Star Trek’s Alexander Siddig has some real fun as the villainous Dr Reese. And Life on Mars’ Philip Glenister also appears as the rebellious Colonial Marine Draper. 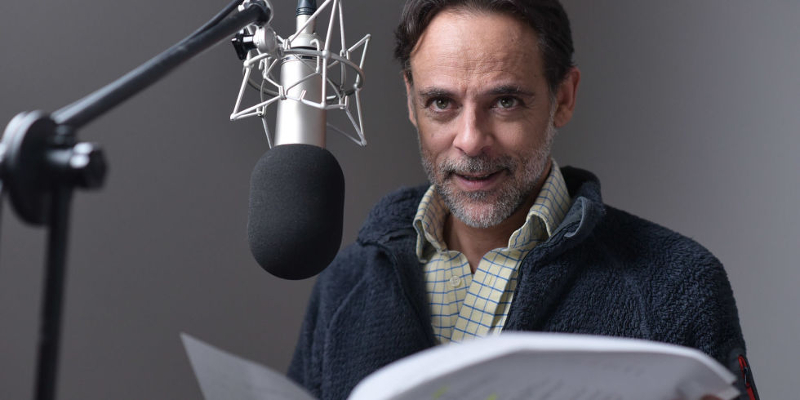 Alien: Out of the Shadow’s Laurel Lefkow returns to voice Ellen Ripley and once again her Sigourney Weaver is just perfect. It’s often impossible to tell it’s not actually Sigourney. It would have been easy to remove Ripley’s involvement in the story (and I wouldn’t have minded too much if Maggs had done so) but it’s just really great having more opportunity to have Lefkow back.

I did have a minor issue with just how large the cast was. At times I was unable to recognize who was who and just lost track of which character was which. It was primarily the minor characters but I still found it a little annoying at times.

As with Out of the Shadows, Dirk Maggs makes great use of the sound design to bring you into the world of Aliens. Something as simple as just hearing the exact door opening sound effects from Aliens can do wonders to take you back to Hadley’s Hope.

Another instance was the sound design for the Pulse Rifle. The different sound was justified as being a completely different model of the rifle but it would just have felt more at home with the original.

Despite these minor sound design nit-picks, I still loved the entire experience. While the issues I had with Christopher Golden’s novel still exist in the audio dramatization of it – though Maggs did fix one particular continuity issue from the novel where Christopher Golden confused the different areas of the Derelict – knowing about those issues going in and being able to focus on the experience instead meant I was able to still get the most out of the audio drama.

Once again, I find myself hoping that I will get to experience more Alien audio dramas from Dirk Maggs. I’m hoping we’ll get to see adaptations of all of Titan’s Alien novels for Alien Day next year but I’d also really like to see Dirk try his hands at some original Alien stories too!

From Aaron Percival/Corporal Hicks here at Alien vs. Predator Galaxy, once again I can only recommend that you head on over to Audible and purchase Alien: River of Pain to go along with that copy of Alien: Out of the Shadows that you already have!