A team of Navy Seals is in the midst of a firefight when it suddenly goes dark. They awake to find themselves in a new and more deadly environment, stalked by a strange enemy. One by one these special-ops officers are killed by an unseen threat, until only one man remains. All alone in a strange world, he must do what he knows best-survive against all odds.

Dark Horse has just finished its run of the brand new prequel series for the upcoming Predators. Like the previous Alien and Predator series just released, the series is titled simply Predators. The series is composed of two stories – Welcome to the Jungle written by Marc Andreyki and A Predatory Life by David Lapham.

Welcome to the Jungle is the primary story of the series and it has over the twice the amount of pages that A Predatory Life has. The story focuses mainly on Drake, a Navy Seal kidnapped by the Predators and dropped on the preserve planet along with his team. He is soon the only Seal left alive and then he runs into Nolan.

Welcome to the Jungle, while focusing more on Drake, establishes Nolan and his character. When we first meet Nolan, we find a man who has been surviving for over ten years (dialogue from Nolan would indicate he was captured some point during the Soviet war in Afghanistan). He’s so used to working on his own that he neither trusts nor wants Drake around. He’s just really pissed off Drake ruined his chance to take out a Predator.

Drake, furious that the Predators have taken out his entire squad, wants to go after them. He wants to deal as much damage as possible to them. It’s nothing but revenge. Drake is able to convince Nolan that together they can do some good and deal some damage to the Predators. It doesn’t take long for Drake to soon show Nolan why he prefers to stay on his own and Nolan soon leaves the Seal behind to return to his survival.

Initially I’d enjoyed what Andreyki offered as an understanding into Nolan. He’s been on this planet for years, surviving by keeping his head down and despite their brief alliance, through his foolishness, Drake reminds Nolan why he operates this way. Because he’s not dead.

But then I saw the movie. The portrayal of Nolan in the movie is absolutely nothing like how he appears in the comic. While I don’t want to spoil too much of the movie, Nolan is hardly sane. The comic portrays him as a fully functioning character. I find it hard to believe that in the space of two weeks (time between the comic and the movie) that Nolan could change so drastically.

The artwork by Guilherme Balbi and Garry Henderson offer a nice rendition of Laurence Fishburne but a lot of blacks are used. It appears that it’s either trying to show some really dark alien world or that it’s just trying to be lazy and get away with not providing as much detail. At times, the blacks are also used too much around the mouth making for some funny looking smiles from Nolan in particular.

Something I haven’t quite figured out yet is just how the Predators relate to each other and the planet. Dialogue from Nolan would suggest that the planet belongs to the classic Predators and that all the Predators we actually encounter in the series are the traditional ones (up until the end). But then that questions why the Super Predators are on the planet…especially if the two sides are rivalling each other. But Nolan only mentions the “cousins that are worse”, not that they’re in any sort of conflict.

It would also seem that Nolan and Drake are responsible for the classic Predator’s capture. They initially capture him and try to use him as bait for the other Predators but the Super Predators show up and start laying into classic. It would seem our original Predator is just not destined to have a good time.

And yet, when thinking about it after seeing the movie…it doesn’t work. It just doesn’t mesh, at all. I was under the impression these guys had had some guidance from Robert Rodriquez but it doesn’t show.

A Predatory Life seems to be about one of the last missions Royce was on before the Predators took him. It’s a small piece that is all about who Royce is as a person. Like with Nolan, we’re faced with a man who operates on his own. “I always trust reliable. I always trust me.” If you’ve read the prequel before you see the film, you can see Royce in another light. He goes from a man who trusts no-one but himself to a man leading a group of the worse the planet earth has to offer.

The mission that Royce is on is no picnic. He’s paid to destroy an entire village, a political enemy and his own friend who works for the enemy. We witness Royce’s brilliant methods and see his cold view on the world. But despite all this, through how Lapham wrote Royce’s inner thoughts, we see that he is a man of convictions. It’s all really interesting and more enjoyable a read than Welcome to the Jungle.

The artwork by Gabriel Guzman and Michael Atiyeh offers fantastic likeness of Adrian Brody and over all it’s much more detailed than the artwork in Welcome to the Jungle, even down to the jungle. Paul Lee also offers some brilliant cover art for the series. 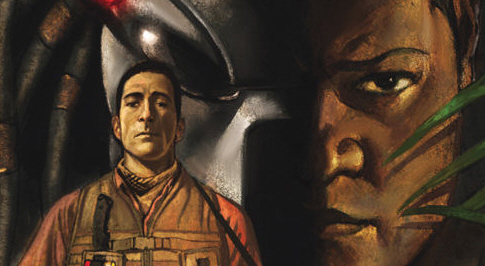 I really enjoyed the series. Both stories offered insights into Nolan and Royce and has added another level to my understanding of these characters to take into the film with me. The artwork is mostly great with only Welcome to the Jungle offering some lack of details and overuse of black. Both stories have good likeness of their respective actors and are very capable of drawing me into this new world of Predators.

Before seeing this, I would have recommended it as a cool read, while not essential to your viewing of Predators. Just how little of Welcome to the Jungle ties into the actual movie really disappoints me. That said, A Predatory Life is simply great. From Corporal Hicks here at AvPGalaxy, I award Predators (prequel series) 3 out of 5.