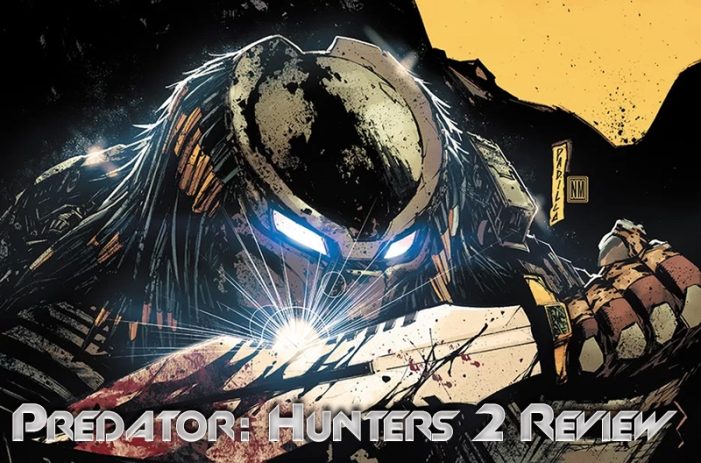 From tropical islands to desert mountains, the hunt is on! Predators–the hunters from the stars–have been coming to Earth since time immemorial, stalking and killing the strongest, most challenging humans for sport. But now the tables are turning as a team of human hunters set their sights on the Predators–wherever they may be found.

After spending the last few years releasing purely under crossover comic events, Predator emerged back into the spotlight with the release of Predator: Hunters (1) in 2017. It saw the gathering of several legacy characters and new characters, assembled them as part of a team and sent them out to stop Predator activity on Earth!

And it was pretty damn good! It also felt like the start of something new. It felt very much like the first episode of a brand new Predator series and I honestly wanted to see it continue. So when news of Predator: Hunters 2 dropped, it would be fair to say I was more than a little excited.

As of January 9th 2019, Dark Horse Comics wrapped the second Predator: Hunters series. The four issue run that started on the 8th of August 2018 saw Alien and Predator veteran Chris Warner return to scribe duties and follows on directly from the first series, dealing primarily with the fall-out of the revelations surrounding Tyler Swain and his background.

Unlike the first series’ 5 issue run, Predator: Hunters 2 is back down to 4 issues much like the traditional Dark Horse Alien and Predator series. With that shorter page length comes a narrower focus. Mandy Graves and Enoch Nakai take a backseat to Tyler Swain, Jaya Soames and the new character Atal, an injured Afghan boy who acts as the Hunter’s guide and a way to show more depth to Swain.

Predator: Hunters 2 focuses mostly on the fallout of Swain’s actions in the first series and his attempts at retribution. In the first series Swain was such an asshole but he found some small redemption in my eyes at the conclusion of the story. However, I think Warner took it much further in Predator: Hunters 2 and really makes Swain a much more sympathetic and likeable character this time, especially through his interactions with Atal.

While Predator: Hunters 2’s focus is mostly on Swain, we do get some additional insight into Jaya Soames as the new series integrated into the post-The Predator lore with the addition of Stargazer and Soames having some familiarity with one of the Stargazer’s senior officer (no-one from the film).

I know The Predator didn’t exactly go down well with everyone (myself included) but Stargazer was the extent of the latest film’s influence on Predator: Hunters 2. There are no DNA-splicing Predators, just another faction with similar goals that serves as an antagonist to our heroes, some serious canon fodder to the Predator and some implied history between Jaya Soames and Stargazer.

I did find it a little disappointing to see Enoch and Mandy take a backseat but they had some small moments that still made me smile. I would hope they would see some attention in following stories.

Predator: Hunters 2 is actually a fairly straightforward story with no crazy plot twists or revelations but it does it well. Get in there, find out what’s happening, deal with the Predator all while developing Swain, the world and intersperse panels of the Predator showing how badass Predators are supposed to be. It works. 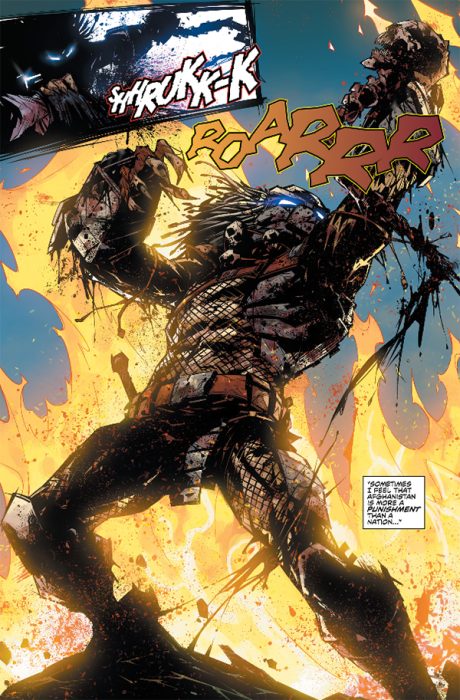 Moving away from the jungles of the Bunting Islands, Predator: Hunters 2 takes the action to the dusty and war-torn Afghanistan which I think is a treat in itself. I know I’m not alone in suggesting the Middle East would be a great setting for Predator.

Prior to this series, the only comic I can think of that ventured to that part of the world was Aliens vs. Predator: Sandtrap, a one-shot that was released exclusively with Alien vs. Predator: The Ultimate Showdown DVD Collector’s Set in 2007 and has not been collected since. So on the setting alone Predator: Hunters 2 wins points from me.

I was also a huge fan of how this series ties directly into Swain’s backstory as established in the first series where Swain survived his encounter with a Predator by hiding and proving himself a coward. In Predator: Hunters 2 Swain comes face-to-face with that Predator and I loved seeing how far he would go to prove himself against it and attempt to avenge those who he let die.

Agustin Padilla and Neeraj Menon’s take over illustration duties from Francisco Ruiz Velasco. Padilla’s line work and Menon’s colours give Predator: Hunters 2 such a raw and brutal appearance that just goes hand-in-hand with how badass the series’ Predator is portrayed as. Visually speaking the Predator hasn’t looked this badass in a long time!

Predator: Hunters 2 is just rife with gorgeous money-shot moments of the Predator. There are so many panels and so many splash pages that just need framing and hanging up on your wall. I also loved how Warner had this particular Predator really go to town on mimicking people. I can’t recall another Predator from the comics who taunted his prey with their own words as much! 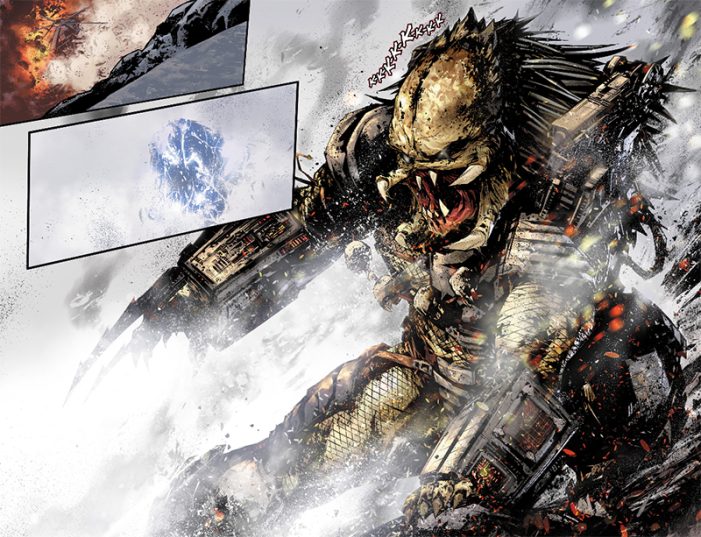 That’s not to say the rest of the pages aren’t good. Padilla and Menon are very consistent with the quality of their artwork, providing detailed panels (especially the backgrounds which is a huge annoyance of mine) and ensuring the page never looks dull.

They are also faithful with the character likeness, providing a visual continuity between the first and second series. I was also particularly fond of the thick blacks that Menon used, as it gave the artwork a very moody tone.

The first series setup the Hunters concept so well and Hunters 2 follows up in an equally exciting fashion. The writing and artwork continue to impress. Predator has not read or looked this good in ages. Fortunately the door is also left wide open for a third entry and I really hope to see the Predator: Hunters series continue!