Before Alien Covenant, David was stranded alone on the Engineers’ planet and left to his own dark devices he began to push the boundaries of creation. Delve into this exclusive collection, containing two books, to gain an insight into the android’s descent into madness.

The in-universe sketchbook contains over two hundred illustrations from the set and will take you inside the mind of David. It features the complete arc of his journey from the studies of flora and fauna, to his more sinister experiments on creatures, and the disturbing demise of Dr Elizabeth Shaw. The companion book, Developing the Art of an Android, holds an interview with Dane Hallett and Matt Hatton the artists behind all of the beautifully grotesque sketches. Alien Covenant: David’s Drawings will satisfy every serious fan s hunger for details of the most intriguing character from the Alien prequels.

An undeniable truth about the Alien franchise – whether that be the films or the comics – is that it always attracts the attention of many incredibly talented artists. Without the work of H.R Giger or Ron Cobb or Mobius, Alien would not have been the success and lasting cultural icon that it has become.

Alien: Covenant was also a showcase of many talented artists. Whether it’s Steve Messing, Carlos Huante or Wayne Hagg, Sir Ridley Scott’s latest Alien film was not void of artistic talent. And now, two of Covenant’s talented artist have the opportunity to showcase the literally hundreds of pieces of artwork they created for the film.

Alien: Covenant – David’s Drawings is a collection of over two hundred pieces of artwork created by Matt Hatton and Dane Hallett to visually depict David’s sad descent into robotic insanity. Their art can be seen decorating the walls of the citadel inside the Engineer necropolis. And this is a book I’ve been excited for ever since Matt and Dane first spoke of it!

It’s not actually a single book, but two books collected in a swanky shiny box with an Engineer-like design. The diary itself has a faux leather cover and the artwork is presented as if scanned. To be honest, this is really my only complaint about the book. 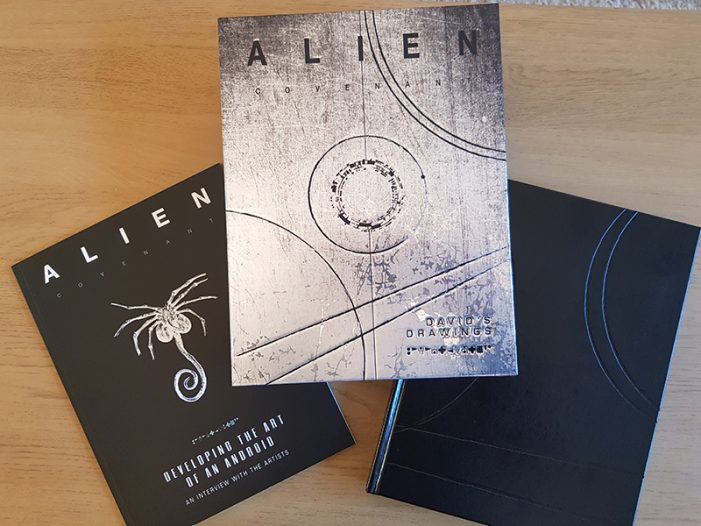 Rather than each piece looking like it’s on ancient paper, at times it looks like the artwork has been scanned with the blank background of the scanner still visible. They also overlap artwork sometimes which is a shame but I would guess that’s to get in as much artwork as possible within the page space. It’s only a small complaint and doesn’t ruin the book but it just lets the immersion down a little bit.

Much like how we’re exposed to the artwork in the film, all of David’s musing and sketches are presented in chronological order with his more innocent research of the local fauna at the beginning.

After about a third of the way in, the drawings become about David’s experimentation on the Engineers and developing his Perfect Organism. The last quarter of the book is devoted to David’s complete madness, in which he depicts – whether fantasy or reality – the various fates of Elizabeth Shaw.

Throughout much of the book, the artwork is annotated by David as he describes his research and thoughts for future experiments. However, the artwork with Shaw is left un-annotated, still leaving what David did to her to our imaginations. 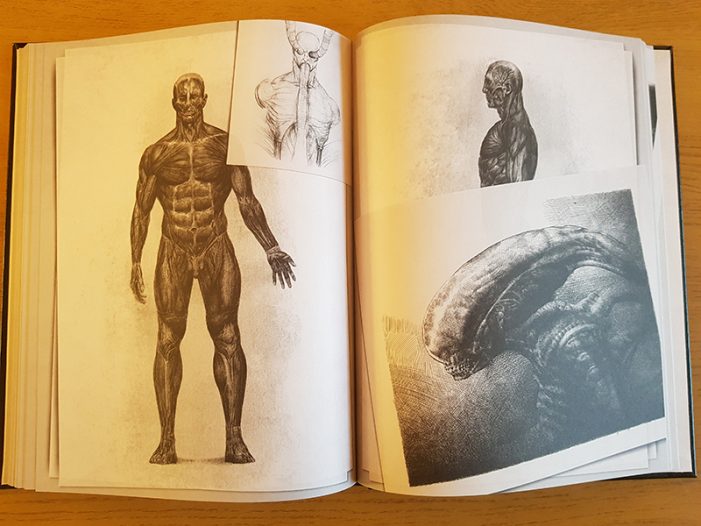 The second book in the collection is called Developing the Art of an Android and features a lengthy interview with the talented men themselves, Dane Hallett and Matt Hatton. They walk us through their history on the film and the techniques and thinking that went into their work on bringing David’s journey to live in their artwork.

Alien: Covenant – David’s Drawings is a fantastic collection. It’s very well presented and not only does it just look great on the shelf, it’s fantastic to have so much of Dane and Matt’s work on the film collected together in one place.

I can’t possibly recommend this collection enough. If you loved Alien: Covenant, you’ll love this book. If you’re not keen on the film but still appreciate all the artistic talent that the Alien series brags, then you’ll love this book! Quite simply, just buy the damn the book.

From Aaron Percival here at Alien vs. Predator Galaxy, I award Alien: Covenant – David’s Drawings a 10 out of 10.

P.S We had the chance to chat to Dane and Matt last year after Alien: Covenant came out. If you haven’t already, go check it out! If you’ve already listened, then listen to it again!