A corridor hidden in darkness… Not too far away, video feeds ignite with an incomprehensible array of Weyland-Yutani employees in panic and distress. Tails of crab-like terrors can be glimpsed coiled around fencing, while miniaturised computer displays blink invitingly from the nearby safety of a pressurised spacesuit.

Yes, it’s that magical time of year when the world unites in celebration of cosmic horrors, forced impregnation, flamethrowers and Sigourney Weaver (not necessarily in that order). With Ridley Scott’s latest effort on the way, ‘Alien: Covenant‘, the hype train was making one final stop for passengers and we chosen few had free tickets to board.

For this year’s festivities, Fox had hired out YouTube’s open-plan venue in London, which allowed for a spacious area in which to decorate with themed wallpaper and rubber facehuggers. Our representatives from Fox, I have to say, were all very friendly and approachable and, meeting up with Leigh Burne (better known on our forums as HuDaFuk), from Xenopedia, we obtained our passes and entered for the coming festivities.

But this was no mere excuse to slap you with a VIP sighting and poster. No, this was like a small convention. Our invitation gave a surprisingly hefty run-down for what was in store, which left me in no doubt that Fox understood what this could mean for not just ‘Covenant‘ ticket sales, but the growing social media influence of one of their oldest fandoms.

Not too far from the entrance, a gigantic screen was used to create the illusion of dozens of smaller monitors, all looping various adverts and special feature highlights for the upcoming film. A glorious wall of HD hype, dripping in virals like entrails from walled cocoons. A nice contrast of neon green lighting was moving across our mostly dark surroundings, which was especially obvious in the bar.

Nobody ran the risk of getting too tipsy, mind you, thanks to our access bracelets having a maximum of three tokens which could be exchanged for strange, unholy concoctions of fluid labelled ‘Acid Blood’. A cocktail which had an oddly sweet, yet tangy bite to it. I’m not quite sure what I imbibed, but I had two of them. Elsewhere, the tiniest cheeseburgers in the world were being handed out – I kid you not, they were literally bite-sized.

Sadly, nobody developed a spontaneous coughing fit while consuming these, though I was fully prepared to rush in with helpful cries of “don’t touch it! Don’t touch it!” 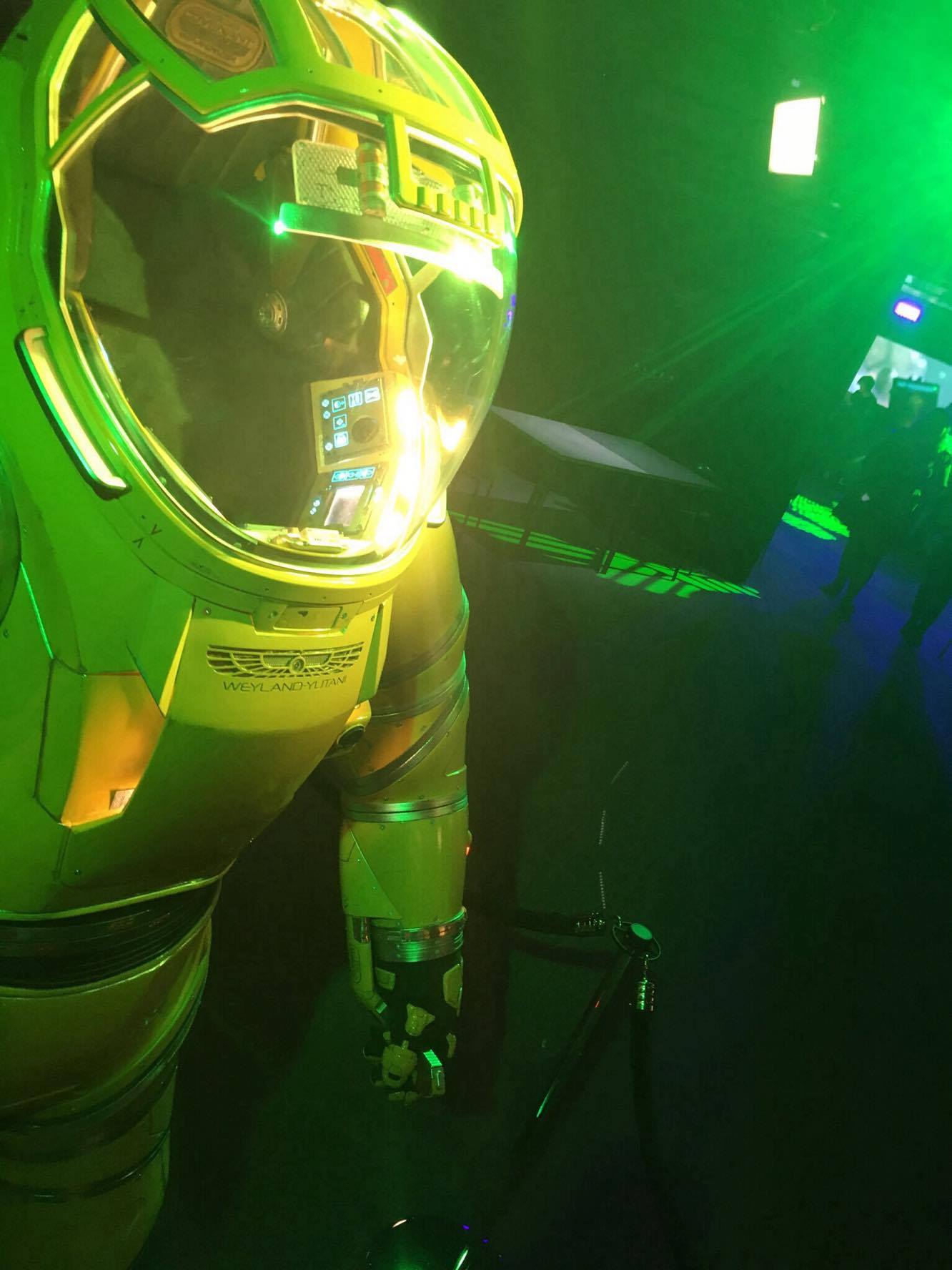 All this was after you passed by a very impressive prop from ‘Covenant‘. Standing unsupported in the main hall was a pressurised suit which, had it not been for the sleek jet-pack, would not look out of place dropping James Cameron down to explore the uncharted ocean depths.

Two control sticks (presumably for adjusting thrust) were attached to the wrists, which struck me as a clever engineering solution to make sure they never get lost in space if the user needs to use tools. The entire thing genuinely looked like a working construct from a futuristic oil rig platform, but it was the addition of small, fully functional, computer displays on the inside of the helmet, which really sold it.

If the Nostromo had been fitted out with suits of armour, this would be it. No scratches in the paint and some of it reminded me of costume design from the ‘Mass Effect‘ games, but it definitely looked like hardware you would expect to see from the future these films represent.

Elsewhere, with better lighting, an art gallery had been set up, surrounded by dozens of facehuggers posed on railings and hanging from the ceiling (not going to lie, they honestly looked drunk). Here was found some superb artistic talent volunteered by fans. Several were clearly inspired by Scott’s new series of prequels, but not all and some were delightfully minimalist in their approach. An illustration contest was also held later on.