“The Covenant mission is the most ambitious endeavor in the history of Weyland-Yutani. A ship bound for Origae-6, carrying two thousand colonists beyond the limits of known space, this is make-or-break investment for the corporation—and for the future of all mankind.

Yet there are those who would die to stop the mission. As the colony ship hovers in Earth orbit, several violent events reveal a deadly conspiracy to sabotage the launch. While Captain Jacob Branson and his wife Daniels complete their preparations, security chief Daniel Lopé recruits the final key member of his team. Together they seek to stop the perpetrators before the ship and its passengers can be destroyed.

An original novel by the acclaimed ALAN DEAN FOSTER, author of the groundbreaking Alien novelization, Origins is the official chronicle of the events that led up to Alien: Covenant. It also reveals the world the colonists left behind.”

When we first learnt that Alan Dean Foster was going to be writing a prequel novel for Alien: Covenant, I think it would be easy to forgive that we were all excited for and expecting what could only be a novel exploring the period in between Prometheus and Alien: Covenant where we finally found out what happened to Shaw, David and the Engineers.

So it came as a little bit of a shock when the synopsis for Alien: Covenant Origins was released and it was nothing of the sort. I understand now, having spoken to Alan Dean Foster for the AvP Galaxy Podcast, that 20th Century Fox wanted that direction left open for potential exploration down the line.

Regardless, I can’t fault those who are disappointed in the direction that Alien: Covenant Origins took as it’s a dark cloud of possibility that hangs over the final novel (unfairly, but it’s there). I was a little disappointed myself but I also couldn’t help but still be excited! It was Alan Dean Foster and he was writing an original Alien novel! Albeit one without any Aliens in it.

For those two or three of you who may not know, Alan Dean Foster is responsible for writing the novelizations of Alien, Aliens and Alien 3. After his bad experiences working on Alien 3, he didn’t return to the Alien world until he novelized Alien: Covenant earlier this year – a reading experience that was better than watching the film, in my opinion. 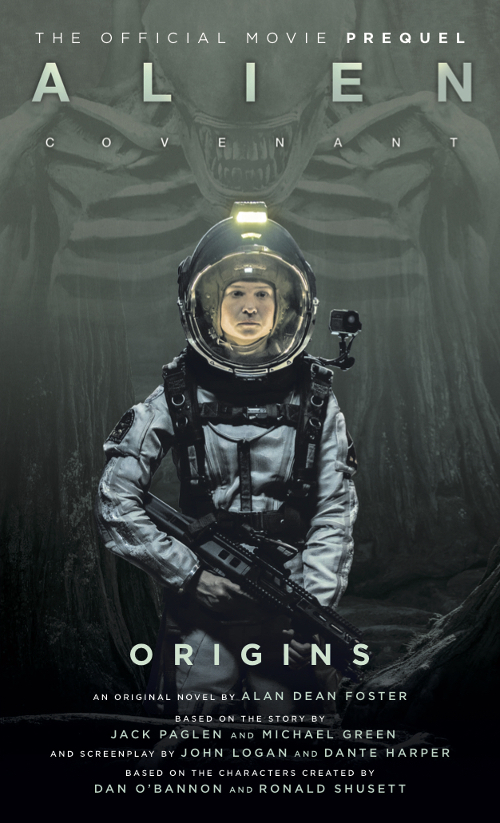 Alien: Covenant Origins revolves around a plot by a cult with the aim to stop the launch of the Covenant and all colonization attempts. It’s up to the security forces of the recently merged Weyland-Yutani and the Covenant to figure out and stop the campaign against their launch.

There were many elements of Alien: Covenant Origins that I really enjoyed and found quite interesting.  One such element was that the adversaries, the Earthsavers, were completely right in their motivations. Their leader, the Prophet, was subject to visions of death at the claws of the Aliens. The cult was organized around preventing his visions becoming a reality and saving mankind from the fate that awaited them outside the solar system.

The concepts of cults and telepathy are no strangers to the Alien world. From the very start of the expanded universe, we had cults worshipping the Aliens and the Queens being able to influence the dreams of humans.

That said, the Earthsavers seemed a little out of left field when it came to Alien: Covenant Origins. They were quickly branded as fanatics with one incident and not too much information to go on. I would have liked some additional background with the concept of anti-colonization groups being frequent and not unexpected.

Unlike the Queens exerting influence over dreams, there was no external influence over the visions of the Prophet which did seem a little out of place within the Alien universe. Perhaps if it had been some sort of warning transmission from the Engineers or another species, it wouldn’t have felt as out of place.

Another issue I had with the Earthsavers was just that they never felt effective. They nearly do so many things but they’re just continually failing and I could never get behind them as being a legitimate threat – the fact that we know from the film they didn’t succeed doesn’t help. And let’s not even talk about the ineffectual exploding cattle.

I really enjoyed getting to spend some more time with the crew of the Covenant. Out of all the Covenant crew, the ones Alan Dean Foster used most were Lope and Rosenthal with the occasional smattering of Branson and Daniels. It was especially great to act get to know Branson (incorrectly called Brandon throughout the novel) and I could clearly hear James Franco in my head. I think Foster did a wonderful job at breathing some life into Branson.

I was a little disappointed with Walter’s inclusion in Alien: Covenant Origins. He doesn’t get mentioned until about halfway through the book and then we don’t actually see him up and around until the closing chapters. While we get a very small moment between him and Daniels, I feel it was a really big missed opportunity to see more of the bond developing between the two characters.

I would have loved to have spent even more time the rest of the crew and this is where I felt Alien: Covenant origins fell down a little. If anything, I wanted more time with those characters. I wanted a better chance to get to know more of the characters that the film didn’t flesh out, not just one or two. I believe the novel should have spent more time doing this.

The Yutani angle of Alien: Covenant Origins was another interesting element of the book. I know many fans have been interested in learning more about the background of the merger. It was especially interesting in the way that Alan Dean Foster wrote the CEO of Yutani as a generally pleasant person. You think Weyland-Yutani and you think an evil, faceless corporation out for its own benefit. I really didn’t get that impression when I was with Hideo Yutani which was really refreshing and not something I was expecting.

I do think, from a world building perspective, it would have been really nice to learn a little more about the Yutani Corporation prior to the merger. We got no indication of what the company specialized in which I think was a real missed opportunity. I expect this was another restriction from 20th Century Fox into how much detail Alan Dean Foster was allowed to get.

Another issue I had with Alien: Covenant Origins was just how I felt like it didn’t quite fit with the actual film. In the novel, the Covenant is pushed as the first venture into colonization and that didn’t fit with the impression I got from the film or the marketing material.

I generally don’t put too much stock in the marketing material but according to the old Weyland Industries Timeline produced for the promotion of Prometheus, Weyland Industries had already terraformed the planet GJ 667CC as far back as 2039 and gone on to colonization further planets and moon. The Last Supper promotional video for Alien: Covenant specified that the Covenant was going to be the furthest colonization attempt. I was just struggling to believe that the Covenant was the first ever colonization attempt.

Something I really enjoyed was Foster’s depiction of the overrun Earth. It was very Blade Runner-esque and very much what I had imagined Alien’s version of Earth to look like so that was something that I was really thankful to see.

Unfortunately, I just struggled with Alien: Covenant Origins. I really wanted to enjoy it and I flew through the opening 100 or so pages but then it just became a bit of a struggle. It wasn’t the Alien: Covenant prequel I really wanted and the prequel elements that I really enjoyed (spending time with the Covenant crew) I just didn’t get enough of.

I think there’s plenty of room in the expanded universe for novels where we don’t always have the titular Alien (there are some really good shorts in Aliens: Bug Hunt that do this) or are devoted to world-building but I just don’t think this was the one for it.

I also understand that this isn’t all to be laid at Alan Dean Foster’s feet. We know from when we spoke to him that Fox wanted to leave that David and Shaw avenue open and we also know that many directions were discussed before this story was settled on. I’d still like to see Mr Foster take on another Alien novel but perhaps one where he has more freedom.