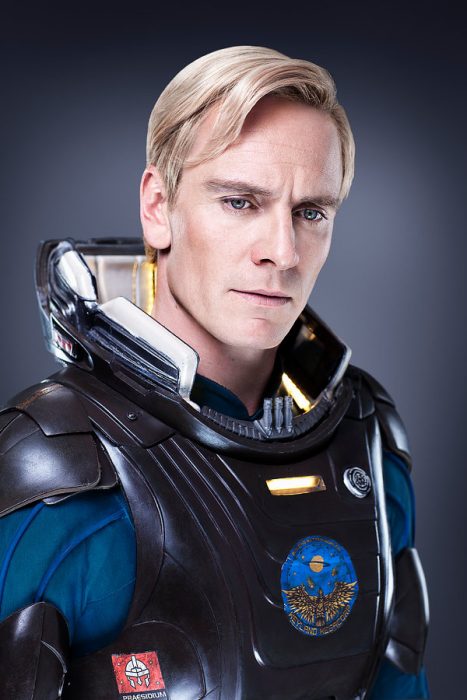 David8, commonly known as David, was an android built by Peter Weyland and was the template for the David 8 and Walter androids built by Weyland-Yutani. In 2091, David was part of the crew on the USCSS Prometheus who embarked on a mission to LV-223. David, along with Elizabeth Shaw, were the only survivors of the mission. Both of them would travel to Planet 4 in search of the Engineer homeworld.

David was initially created by Peter Weyland. Weyland asked David to describe his environment and asked what his name was. David was looking at Michelangelo’s David statue and said his name was David. Weyland said they would search for the creator of mankind in the future. David then asked Weyland why he must serve him if he will live forever and Weyland will eventually die.

While the crew were in hyperleep board the ship Prometheus on route to the moon LV-223, David was seen in the halls, riding a bicycle, playing basketball, learning languages and watching Lawrence of Arabia. While Elizabeth Shaw was in hypersleep, he viewed her dreams about her childhood and her father. David was very interested in the Engineers and their technology and was able to understand their language surrounding their structures on LV-223.

When they arrive, a holographic presentation by the supposedly deceased Peter Weyland introduces David as his surrogate son. The crew soon embark on an excursion towards one of the artificial structures on LV-223 containing submerged Engineer ships. David activates an ancient hologram showing Engineers escaping through the corridors of the ship. Following the hologram, he finds a room filled with ampules containing a black mutagen. He secretly recovered an ampule of it to take back to the Prometheus.

Shaw realised a windstorm was approaching so the team returned to the Prometheus. On the way, David saved Shaw and her partner Holloway from the storm after she had tried to retrieve the Engineer head. Inside, the crew realised the Engineer head was really helmet and David was the only person strong enough to open it.

An unidentified voice over the radio tells David to “try harder”. After speaking to Holloway, David spiked Holloway’s drink with a drop of the black liquid. The crew returned to the Engineer ship and David found the main deck of a spacecraft. He activated a virtual map of the galaxy showing various planets and he realised the ship was originally about to travel to Earth. David soon came across an Engineer in stasis in a hypersleep chamber.

After the crew returned to the Prometheus, they believed some of the crew had been infected with an airborne virus. When David is examining Shaw, he discovered Shaw was pregnant with an alien creature. He told her she should be frozen so they could remove the alien later. She refused and she was given a sedative. When she awoke, she escaped and removed the creature herself in the MedPod. When Shaw later explored the ship, she found David tending to Peter Weyland who had been on the Prometheus the whole time.

David and Weyland meet the Engineer.

Shaw tried to convince them to forget about the mission and return back to Earth. David said he had found an Engineer and Weyland suggested that they could revive it. Shaw, David, Weyland and his team go the flight deck of the Engineer ship. Shaw asked David why the Engineers were carrying a bioweapon. He explained that destruction was a form of creation and said all creations longed to see their creators dead. The team awoke the Engineer and David spoke to it in its language. David was captivated by the Engineer but it soon turned on them. The Engineer decapitated David and killed the others while Shaw escaped. David was still functioning and said goodbye to Weyland.

The Engineer activates the spacecraft and attempts to leave the planet before the Prometheus crashes into it, sending it hurling back down to the planet. David’s detached head warns Shaw the Engineer survived and is heading towards her. Shaw survives the battle. David then contacts Shaw and asks her to retrieve his head and torso so he can pilot another Engineer ship. Shaw said she will cooperative with him if he takes her to the Engineer homeworld. He agrees to take her there.

Shaw managed to reattach David’s head to his body aboard an Engineer’s ship and they set coordinates to the Engineer homeworld, known as Planet 4. Shaw goes into hypersleep in one of the Engineer’s stasis pods and David takes over the Engineer ship. David uses the time to further study the Engineers and concluded Engineers and humans were inferior to androids. When he reaches their planet, he unleashes thousands of Ampules that contain the pathogen onto the Engineers, killing them all.

Life on the planet has been exterminated or had been mutated and the Engineer ship that David was on, crashed onto the planet. Shaw at died at some point and David started using the Engineer temple as a laboratory. He began documenting all the life on the planet and continued his experiments with the black liquid. He used Shaw’s body for further experiments. His further research led him to create hybrid creatures using the pathogen. David created a few large eggs but he needed a living host for them.

David has been living on the Engineer homeworld for a decade.

The USCSS Covenant arrived on the planet and two Neomorphs attacked the crew. David appeared and drove them off with a flare. He led the group back to his temple. The crew of the Covenant had a later-generation android with them called Walter. He learns about the 2,000 colonists and 1,000 embryos in stasis aboard Covenant. David takes a special liking to the synthetic, Walter. He tells him that Shaw died when the Engineer ship crashed and said that he loved her. David teaches Walter how to play the flute. Walter explains that even though he is more advanced, he has been inhibited from creating, due to David’s more human-like idiosyncrasies and ability to think for himself.

When a Neomorph appeared in the temple and kills Covenant security officer Rosenthal, David attempts to communicate with it. The ship’s captain Oram kills it. David led Oram to his laboratory and tells him how he experimented with the mutagen. He leads him to the eggs where one opens and a Facehugger attacks Oram. Soon, a variant of the Xenomorph emerged.

Walter finds the corpse of Shaw and finds out David killed her and the Engineers. David impales Walter in the neck with his flute, seemingly destroying him. David then attacks Daniels but Walter reappears and they fight. Daniels escapes and David terminates Walter and assumes his identity. David amputated his hand, takes his clothes and changed his appearance to match Walter’s to disguise himself. David reaches the cargo lander and helps the remaining crew kill the Xenomorph.

Aboard the Covenant, the ship’s computer informs the survivors that an unidentified organism is on board. David helps Daniels and the pilot, Tennessee lead the Alien to the terraforming bay where it is flushed into space. David helps Tennessee and Daniels into cryosleep. Just before, Daniels recounts her dream about a cabin on the lake which she told Walter about. When David doesn’t recognize her story, she realises that Walter is actually David. David then sends her to cryosleep. He regurgitates two Alien embryos and stores them in a freezer next to the human embryos. He sends out a transmission pretending to be Walter and says that all crew members except for Daniels and Tennessee were killed in a neutrino blast and they are en route to their original destination, Origae-6.

David was interested in Lawrence of Arabia which inspired him to model himself on the lead – T.E. Lawrence which including repeating his lines and restyling his hair. David was curious about the Engineers like the crew, but he wanted to understand if man’s existence was similar or different to his own. He could understand human emotions but couldn’t really express them himself. His curiosity of the black liquid led him to spike Holloway’s drink with the liquid and see what happened to him.

David pretending to be Walter in Alien Covenant.

David became even more cold and calculating. When he reached the Engineer homeworld, he unleashed the pathogen onto the Engineers, killing them all. David found himself isolated for a decade on the Engineer homeworld performing his experiments and creating new life. He seemed to understand human emotions even more and expressed his love for Shaw. Despite this, he still viewed humans as an inferior species to himself and was ready sacrifice the Covenant crew to further his research.

Writer Jon Spaihts created David in his first draft of the screenplay called Alien: Engineers, to explore the ideas of creations being in the presence of their creators. Unlike the crew of the Prometheus, David was already in the presence of his creators and became disillusioned by them and considered himself to be a sentient being. In Spaihts’ script, David doesn’t contaminate Holloway with the dark liquid. Instead he his knocked unconscious, attacked by a Facehugger and makes it back to the ship where he is killed. David begins exploring the areas on his own because he feels he belongs with the Engineers. Shaw goes to stop David but he ties her up and exposes her to a Facehugger. Ridley Scott liked the idea of David having contempt for his human creators and urged Damon Lindelof to expand it further The changes were incorporated into Lindelof’s Prometheus script.

Michael Fassbender was Ridley Scott’s first choice to play David. Fassbender first met Ridley Scott in 2008 after the director had seen Fassbender’s film Hunger. Fassbender had seen the previous Alien films before but chose not to watch them in preparation for the film. He had quite a bit of free reign on how to model the David character. The actor looked at Sean Young’s character Rachael, a replicant in Blade Runner. 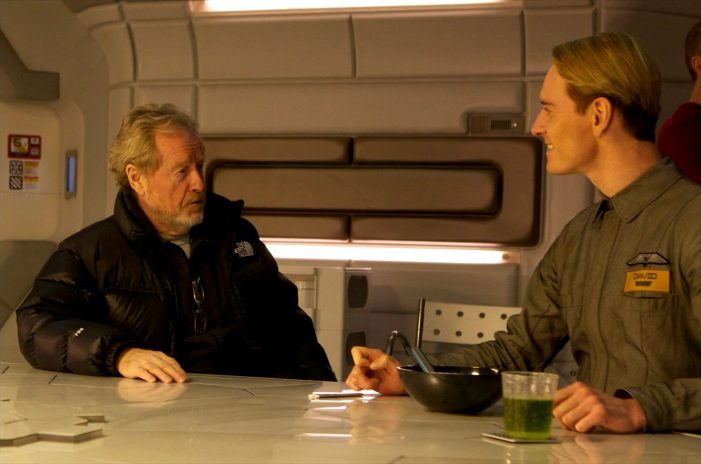 Fassbender was also inspired by other film performances: Douglas Rain as HAL 9000 in 2001: A Space Odyssey, David Bowie in The Man Who Fell to Earth, and Dirk Bogarde in The Servant. Additionally, Fassbender modelled his walk around American Olympic diver Greg Louganis. In the script, David was interested in the 1962 film Lawrence of Arabia and therefore Fassbender modelled his appearance on Peter O’Toole’s character T.E. Lawrence. It was Ridley Scott’s idea for Fassbender to dye his hair saying it would give the character an unsettling appearance.

Since Prometheus, Fassbender met with Ridley Scott several times to discuss the next movie. Fassbender said that they never discussed the evolution of the David character. When he got the script, everything was already there. The Alien Covenant Blu-ray featured many deleted scenes with regards to David’s actions and motivations. We would have seen more of David in his laboratory, mixing parts of Neomorphs using the black liquid to create the Xenomorph eggs. It’s implied that David’s plan was to lure the colonists to Planet 6 to use as hosts for his experiments rather than a means of escape. The scenes would have hinted that David was going to work with Weyland-Yutani and use Daniels to create an Alien Queen. He wanted to use his experiments to take over the galaxy.

NECA released a David figure as part of Prometheus Series 2 in 2013. 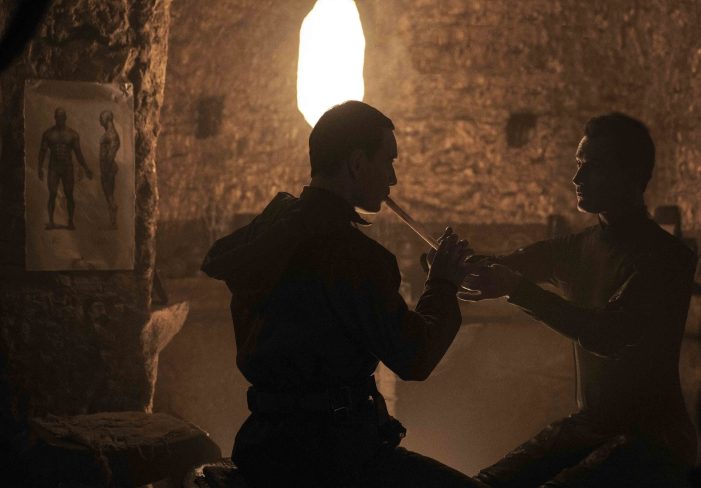 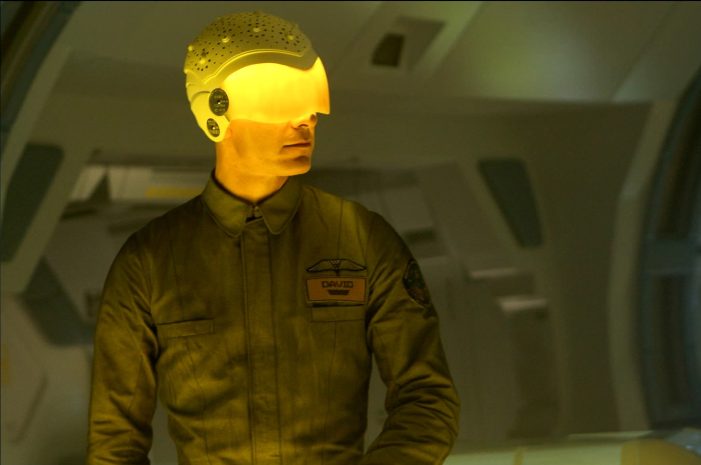