I thought it was worth putting together an analysis page of all the things we’ve seen in the trailer. I’ve tried to put them in some sort of chronological order of when they happen in the movie. This is just my opinion on things I’ve seen so far so I may be right, I may be wrong. I’ve referred to the Space Jockeys as Engineers as that’s what they’re supposedly known as in the film/in the script.

There’s a few scenes showing the characters’ spacecraft Prometheus entering a planet’s atmosphere. This has to be at the beginning of the film. The planet is very mountainous and cloudy. In the shot below, we can also see another planet on the left. I’m assuming that the majority of events in the film take place on one planet but it is possible the characters will visit another one too.

This one isn’t an important scene. It just shows Charlize Theron partially naked laying on the floor.

There’s a few scenes showing the characters’ vehicles. There’s two armoured carriers and two smaller recon units. You can make out the W symbol on the vehicles which stands for Weyland Corp. The characters are also carrying flamethrowers. I’m assuming they take the vehicles to the Engineer’s spacecraft. A bit later in the teaser, you see Noomi operating one of the vehicles. The most interesting shot is the final one showing the vehicles heading back to the Prometheus ship on what appears to be a road. Perhaps, another civilized race of beings resided on this planet at one point too.

We see a series of shots of the characters (Shaw, David, Holloway and Imora) exploring the Ampule Chamber which presumably is on board the Engineer’s spacecraft. It contains a huge humanoid head with lots of Ampules on the floor. It’s difficult to make out in the screenshots but the Ampules all have inscriptions on them. In a production still, the characters find something on the floor next to a creature’s corpse. I’m assuming this is the creature’s skull which we see them looking at on the Prometheus ship.

The shot below is kind of confusing. The characters are still on the craft but there are red lasers scanning them. It doesn’t resemble Space Jockey technology. It could be their own technology though but what purpose would it be for?

In the scene below, we can see someone standing in the middle of the control room viewing a huge holographic planetary system. The character, I think, is Michael Fassbender’s character David. He’s not wearing an helmet and you can tell by his hair. The planet system could be of anything but it supports the theory that this area is the ship’s navigation system. You can also make out the two ‘stasis’ tubes on the platform which I’ll talk about a bit later.

In this scene we can see a huge waterfall with a huge saucer-shaped spacecraft hovering over it. This scene was actually shot in Iceland. I recall Ridley Scott saying they filmed there for two weeks. He said the sequence will last for 15 minutes and will be about ‘the beginning of time’. Presumably, this is the flashback sequence that takes place on Earth (or another planet) and is about an alien race, perhaps seeding life on Earth. It’s doubtful it’s the Space Jockeys as the design of the ship is completely different. I’d say this scene takes place either at the start of the film or when the characters reach the alien spacecraft.

These three shots all follow each other in the trailer but I don’t think the first one is part of the same scene. The lighting is completely different. It looks brighter in the first shot than in the following ones. The first scene shows someone standing outside the Prometheus ship with a massive cloud heading towards the character.

We next see a shot of Noomi Rapace staring at something and then suddenly being blown away.

We then see her being blown back passed the landing gear and she’s carrying something too. I think this takes place after they bring back the Space Jockey skull from the craft.

There’s a couple of shots on the Prometheus ship with the characters looking at the items they brought back. First we have Michael Fassbender’s character David, removing a translucent green object from the Ampule. It appears to have four pods joined together. So what are these used for? It’s my belief that they contain DNA of various creatures. It’s not a coincidence that the film is about the beginning of life as we know it. Was the xenomorph in Alien deliberately engineered or was it created purely by accident? It’s been iterated countless times that the events in this film will lead to how the xenomorph in Alien came to be created in the first place.

Next we have some of the characters scanning a skull.

Notice anything familiar? The skull resembles a Space Jockey skull though there is a size difference between this one and the one we saw in Alien. 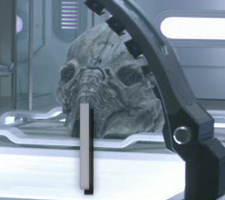 A scene suspiciously absent from the teaser trailer is when Shaw’s stomach enlarges. It’s sort of implied she gets pregnant somehow (she is possibly raped) and the gestation period has been rapidly speeded up. The first scene I found interesting was when a man is leaning from a bed with his head in his hands. He looks very regretful. You can see another person in bed and they have hurt their leg. I’m going to assume this is Noomi Rapace’s character Shaw.

Next we see Noomi Rapace stumble into the medical bay with three other men. She’s covered in blood and has obviously had a traumatic experience. As a sidenote, one of the men is in a wheelchair. Maybe he was already paralyzed or maybe something happened to him too.

Next we have a shot of Noomi Rapace in a lot of pain. This is where the shot of her stomach enlarging would be I assume. She gives birth to something and survives.

There’s been a lot of talk about the mutant in the trailer. I’m assuming that the following shots are all of the same character. At some point when the characters are exploring the Ampule Chamber, this person gets burnt and infected with something. It’s kind of reminiscent of when Kane gets attacked by a Facehugger in Alien.

In the shot below, we can see him transforming into something. Parts of his neck looks strangely translucent. We also have the character’s name from his cap: Holloway. There was also a production still released showing Holloway, Shaw and David exploring the Ampule Chamber together.

A bit later in the film, we see someone jumping from a vehicle towards another character.

His face has been clearly mutated into something else. He’s wearing a spacesuit but he’s not wearing an helmet like the other characters. This has to be Holloway. 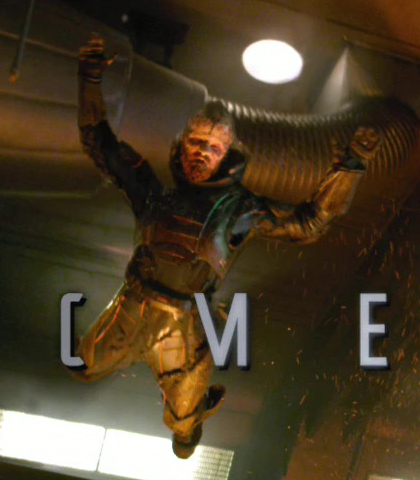 I’ve had trouble placing this shot. The characters are shooting at something. It could very well follow on from the mutant attacking a character in the previous scene but the lighting is all different.

Take a closer look. There’s a lot more to this scene than meets the eye. You can quite clearly see a tall, bald humanoid figure on the right staring at the chair and turning. This is commonly believed to be the Engineer, i.e. the Space Jockey. If you actually brighten up the screenshot and look at his back, you can see that he is biomechanical. He has been fused with something mechanical. This parallels with the derelict spacecraft in Alien. A mechanical ship fused with organic matter. Another theory is that the being here is actually the mutated Holloway. He obviously went through some kind of transformation. If you think about it, the creature that the characters discover in the Ampule Chamber could be the Space Jockey as we know them. It’s very similar in design to the ship whereas the being featured here is more human-like. Either way, I think this scene takes place towards the end of the movie. The craft takes flight at some point and I think this is the being who flies it. 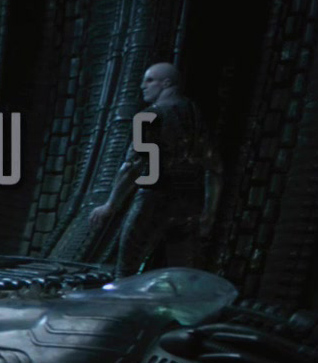 If you look at the Engineer’s seat, you can see something just above the top part of the seat. This is believed to be the helmet that the creature would wear, maybe to interface with the ship. Ridley Scott made it clear that the Space Jockey creature isn’t a creature itself but a suit for something else to wear. Presumably, it has to be biological in nature as it was clearly fossilized in Alien. The Space Jockey was also fused with the chair. 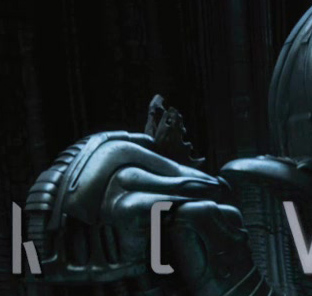 Lastly, you’ll notice two raised capsules on the right-hand side with the one on the left is lower and open. Perhaps, they were some sort of stasis pods. You can make out in the shot below that their head would be on the left with space for their arms on the side. As the left pod is open, perhaps the being above came out of it. Or the corpse that the characters find in the Ampule room came out of it.

The first scene shows Charlize Theron’s character running frantically and she’s taking her suit off. This could be related to the next part where she’s climbing into a pod in a space suit. I don’t think this a stasis pod but an escape pod. It’s later theorized that the Prometheus ship crashes into the Space Jockey spacecraft and Vickers (and Shaw if she’s on there) have to eject from the ship.

This scenes shows Captain Janek looking really surprised at something on the Prometheus ship.

Firstly, let’s make it clear that the spacecraft here isn’t the same one that crashed in Alien. It’s similar but there are differences in the design if you look closer. In Alien, you can tell that the ship crash-landed onto the planet from the way it’s positioned. This one doesn’t. It just topples over. This isn’t even the same planet as LV-426 either. The landscape is completely different. I’ve had a hard time trying to put the shots of the spacecraft in order. At one point there is an explosion on the ship when it’s in midair. It could be from inside but it’s more apparent a bit later that the Prometheus ship crashes into it causing the explosion.

The next two shots I have trouble placing. The first one shows Noomi Rapace standing near it looking up and the next one shows it standing upright from a distance. At first, you think it might be docked or something but you can make out bits of fire on the ground which came from the explosion above.

We then cut to two characters (Noomi Rapace and Charlize Theron) running away from the spacecraft as it’s rolling and bits of debris are flying from it.

We can quite clearly see part of the Prometheus’ landing gear on the ground which supports the theory that the Prometheus ship crashes into the spacecraft. 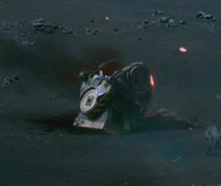 The following shots show more of the characters escaping the spacecraft’s path. There’s a closeup of Charlize Theron and then one of Noomi Rapace. It’s kind of interesting that these two are the only characters there, the rest might very well be dead as this scene has to really happen towards the end of the film.