I’m assuming we should all have heard about Prometheus, the epic new science-fiction film from Ridley Scott that explores the origins of humanity. But waitaminute! Didn’t that start life as an Alien prequel? I reckon it did. I wonder if it is still an Alien movie?

That seems to be a question echoing around the message boards at the minute. “Is Prometheus an Alien film?”

Suppose it might be worth taking a look to see if it is.

Prometheus is the end result of what was initially announced as an Alien prequel from Scott Free Productions. Ridley wasn’t initially attached to direct, it was Carl Rinsch, the husband of Ridley’s daughter. Even back then details behind the movie were still sketchy. After a few months it came out that Fox wasn’t willing to proceed with the project unless Ridley Scott would be directing and we eventually learn that prequel would, in fact, be two movies.

Eventually the announcement was made that the prequel had transformed into a new project, a film called Prometheus, that wasn’t connected to Alien, only that it would contain “DNA strands of Alien”. At the time no-one was really sure what that statement actually meant. However, with Prometheus’ release looming  and advertisement now starting to kick into overdrive, I’d like to present you all with…

Three Simple Reasons Why Prometheus is an “Alien” Movie

The connection between Alien and Prometheus has been undeniably evident since the release of the first trailer in which we were shown brief footage of a strange spacecraft of in-human origins. Alien presented us with an damaged alien spaceship crashed on the surface of LV-426, a ship that would later be referred to as the Derelict.

All we saw of it was this strange organic construction to the ship, a biomechaniod design that it shared with the Alien that would eventually burst its way onto the Nostromo and stalk its way through the corridors of the rundown vessel.

Very little of the actual ship was seen on film. The explorers from the Nostromo discovered a strange chamber in the ship, containing a “chair” or console that encased a fossilized and chest-bursted body of another alien lifeform that would come to be known as the Space Jockey. Oh, and of course, the chamber full of Xenomorph eggs beneath this chamber.

Much of its history and origins was unknown but often speculated on by further expanded media and by the filmmakers themselves. Ridley Scott commented as far as back as straight after Alien’s release that he wanted to do on to a prequel that revolved around this mystery ship. Well it certainly looks like Ridley Scott has fulfilled that wish in the form of Prometheus.

The first trailer showed us brief glimpses of an alien ship that looks exactly like the Derelict from Alien. Unlike the grounded Derelict from Alien, this ship was in flight. Whether it is the same one remains to be seen but the horseshoe shaped vessel is quite clearly of the same design and origins as the above pictures show.

Then came the full and international trailers. Both contain plenty of footage that show more of both the interiors and exteriors of the Derelict. We even got treated to a full 3D holographic image of the ship that is easily identifiable as the Derelict.

Now the question remains whether this is the same craft as seen in Alien? There are several differences in what we’ve seen so far, mostly in the way of the interior of the craft. Most noticeable is the differences in the wall designs. In Alien it was much more organic. Now, whether this is down to Aliens gunking up the place, remains to be seen.

But if that still isn’t enough to convince you this is an Alien movie, let’s move onto reason numero dos, shall we?

The aforementioned Space Jockey is the mysterious creature found within the depths of the Derelict. It was found, seemingly grown from, a “chair” or console of sorts that appears to look like a telescopic device or a weapon of some sort. Whether that device was for navigation or indeed a weapon remains to be seen.

What is easily seen, however, is that very same chair/console/weapon in the Prometheus trailer. It’s a very brief clip but the chair can be plainly seen raising from the floor of a location that looks very similar in the design to the interior of the Derelict as seen in Alien.

While the clip in the trailer was brief, we received leaked set images of a similar chair. It doesn’t appear to be an exact replica of the chair and it’s missing the “telescope” and the body within it, the similarity is convincing.

Furthermore, the IMAX and full release trailers show a Jockey sat within the chair, the chair closing in around him. It does look somewhat shorter than the Jockey as seen in Alien so again, it begs the question of being the same Jockey or if it’s a just a simple case of not having the whole the picture.

So…we’ve got the a Derelict-style ship, a Space Jockey chair and what appear to be Jockey suits. Surely that’s enough? Please, tell me you’re convinced! No…? Really?! Well, okay then, let’s move onto the piece la resistance:

Our third and final and undeniable reason is the name Weyland. While it was never spoken aloud in Alien, Weylan(d)-Yutani was the Company that owned the Nostromo and orchestrated the disaster that was the events of Alien. They placed Ash on board and they gave him the “crew expendable” order.

Weyland is a name synonymous with the Alien franchise and the inclusion of that name in Prometheus is a firm and solid fact that it is set within the Alien universe. This fact wasn’t revealed until very recently. The first suggestion of the involvement of the Company was a logo that was seen on some of the leaked set pictures. This logo appeared to be similar to the W-Y logo as seen in Aliens. It wasn’t very clear but following the start of the viral campaign this logo can be plainly seen and the name Weyland Corporation and the influence of the logo from Aliens is unmistakable. 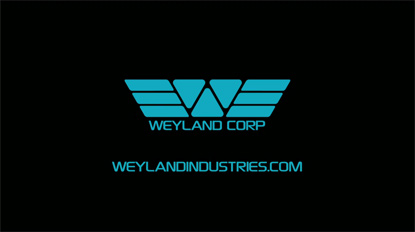 I do find it interesting that this time around Ridley Scott has gone for Weyland with the D and the W-Y logo. While the name was never spoken in Alien, the careful eye could catch the name Weylan-Yutani on their uniforms and a different logo which looked like Egyptian wings. I think it may be possible he went with James Cameron’s spelling and logo since that has now permeated the franchise, through films, games and comics and has become the versions most well known to the audience.

That leads me to wonder, though, if Prometheus isn’t an Alien film, why go to the effort to make it the more obvious connection? How peculiar.

Now…I know I said 3 reasons, but this cheeky 4th reason I’m sneaking in here is too much to resist including!

Well, I assume it’s Giger’s mural. H.R Giger, the legend behind many of the iconic designs from Alien, the Xenomorph himself, was announced as being involved in Prometheus sometime ago. To what his extent he is involved was never really discussed. According to my own sources, I’ve heard he was asked to work on just one thing, a mural.

The recent full trailer had a brief glimpse at what I can only imagine is said mural. And it looks very much like an Alien to me. I really don’t think any more words on this reason are needed, instead I’ll just let you enjoy the image:

So considering everything we’ve seen so far, I think it’s impossible to deny that Prometheus isn’t an Alien movie. Perhaps Ridley Scott denies the connection because it doesn’t involve an Alien actual? But there is no doubting the fact that it is set within the very same universe.