First featured in Prometheus, the Deacon served as an epilogue for the film to make its connection to the Alien series even more concrete than just featuring the Engineers. The Deacon’s first appearance has so far been its only appearance and as such mankind has never knowingly encountered the creature.

With no in-universe name, it is known only by the nickname given to the design by the production crew – the Deacon. This was due to the shape of the creature’s head resembling clerical headwear.

The Deacon also shared similar invasive life-cycle to the Neomorphs and the Aliens. Its birth was also the result of a series of unlikely events. It required the ingestion the accelerant.  The infected host then needed to have sex with another person.  The window for these events to occur would presumably be reduced or expanded depending on the amount of accelerant that was consumed.

The accelerant affects the host’s reproductive organs – sperm in the case of Prometheus – in such a way that it resulted in the impregnation of the partner with another creature – the Trilobite – which was another critical part of the Deacon’s creation. The Trilobite gestated inside its mother’s womb and grew at a considerable rate, growing too big for the host in less than 12 hours.

During the Prometheus expedition in 2093, the Trilobite’s host, Dr Elizabeth Shaw was able to perform a caesarean and remove the Trilobite before it could fully mature. It’s unknown exactly how it would have been born from its host but presumably it would have killed her in a fashion similar to the births of other accelerant based creatures.

Once fully matured, the Trilobite had a similar biological function to the Alien face-huggers the crew of the Nostromo would later encounter and that David 8 would evidently engineer. Let loose by Dr Shaw, the Trilobite attacked and overpowered the last surviving Engineer that the Prometheus expedition had encountered and impregnated him.

After Dr Shaw and David 8 left LV-223, the Deacon birthed from the already dead Engineer in a fashion that resembled the Alien chestbursters and the Neomorph bloodbursters. Like the canine based Aliens, the Deacon emerged in a more developed stage.

In the Dark Horse Comics series Fire and Stone, over 100 years after the events of Prometheus, the crew of the Geryon Armada would investigate the disappearance of the Prometheus expedition and unwittingly discover what became of the Deacon. While not stated explicitly, it is heavily implied that the Deacon has become some form of huge living mountainous organism.

Following the crash of the Juggernaut at the end of Prometheus and the spilling of its accelerant cargo, the moon’s entire eco-system was completely transformed with a huge jungle environment developing. It evidently also caused the Deacon itself to evolve at an accelerated rate and eventually grew into a living structure resembling a mountain.

Derrick Russell, the chief terraformer of Hadley’s Hope and one of a small group of survivors from the Alien infestation who had managed to escape from the nearby moon LV-426 in 2179, noted that the strange mountain was getting larger over the several months he had been there.

Russell was also able to recover one of the “pups” from the Prometheus mission that had been actively scanning the planet for the last 86 years. In the probe’s earlier recordings, we’re able to see the mountain at an earlier stage when it more closely resembles the deacon as if it was just lying down.

Over the course of nearly 130 years the Deacon had somehow evolved into a huge living mountain-like living entity. It wasn’t until 2219 that the survivors of the Geryon discovered that the “mountain” was in fact alive. Elden, a biological based synthetic who had himself been injected with the accelerant and mutated into a strange Alien-like creature, was the first to realize this.

The survivors were trying to track down a signal emanating from inside the mountain, and found that the Deacon had grown around the remains of wreckage from the Prometheus. 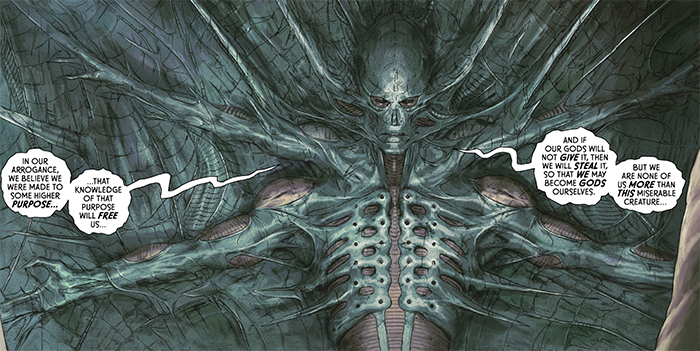 Prometheus had originally started life as a more direct Alien prequel and the Deacon evolved from a concept from those earlier iterations. Originally, a massive Alien – nicknamed the Ultramorph – would have burst from the Last Engineer and tried to kill Dr Shaw – then known as Dr Watts. She would ultimately kill the large Alien using a diamond drill.

The Deacon took the place of the Ultramorph but instead of serving as a final antagonist, it would serve as a coda to make the film’s connection to the Alien universe more obvious.

Originally the Fire and Stone comic series would have taken place just after Prometheus and revolved more around the Deacons and their evolution into the Aliens. Early cover artwork released for the series actually depicted the Deacons rather than the Aliens. 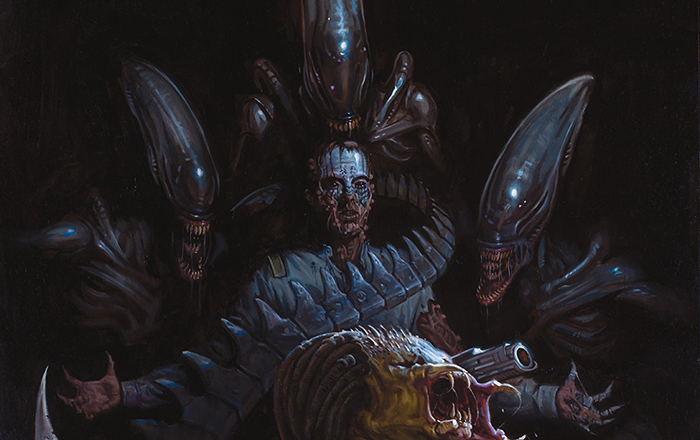 In fact, most of the series had already been half-written when the writers found out that they weren’t allowed to use the Deacons due to their story being too close to what Alien: Covenant was doing with the Neomorphs and the Aliens.

Back in 2015 Alien vs. Predator Galaxy had the opportunity to interview several of the writers involved with the Fire and Stone series and we asked them about the change to the Aliens. When we asked Chris Sebela about this, he told us:

“Initially we were using Deacons and sort of tracing their evolution into full-on xenomorphs, using the Deacon we see at the end of Prometheus, but that hewed too close to what they were talking about for Prometheus 2, which makes sense.”

The Complete Fire and Stone collection contains a lot of concept art of some of the earlier directions the series could have taken. In the artwork we see explorations for designs of Deacon’s that were born from human hosts and a design for a more fully grown – though no quite mountainous – design of the Engineer-derived Deacon from the end of Prometheus.

And that is it for the Deacon. It has made no further appearances. Since the Neomorph replaced the Deacon’s place as a proto-form of the Alien in Alien: Covenant, I personally feel that we’ve seen the last of the Deacon.