When Prometheus released on June 8th, it became pretty evident that Giger wasn’t as involved as we all thought he was. His design aesthetic was evident (and it was and is beautiful) but the biomechanical feel didn’t seem as present as it was in A L I EN. Back up a few months. Per my childhood and long standing obsession with the Alien universe, I scoured the internet daily, searching for something new, some tidbit that I hadn’t noticed the day before. Carlos Huante.

I began researching who this guy was after reading that he was attached to the film in the creature design department, but more importantly, what he could bring to the table? Having also read that Neville Page was involved in Prometheus in some capacity, my confidence began to warble ever so slightly. I had never been a fan of Page’s and I knew it would take genius to infuse terror into the ALIEN multiverse.

As I quietly discovered Carlos Huante’s work, I was taken by the despair of his design, and the psychologically grotesqueness of his drawings. There is something unnerving, beautiful and sad. Most importantly however I felt that there was a unique terror in his work that matched Giger’s. I was sold.

AvPGalaxy – How did you get your start in the business?

Carlos Huante – I met my first life drawing instructor Michael Spooner at Art center who happened to work in the the layout department for Filmation on the He-Man series. He Moonlighted as an instructor for “Art center at night” which was the extent of my formal education. I expressed my interest in working for animation to him one day and he invited me to visit the studio. I met a lot people there and ended up with a job as a scene runner. A year later I was hired as a Jr. layout artist. Months after that I was working for a company called “Ruby and Spears” where I worked in layout again but was hired strictly as a drafts man.

My job was to go over all the layouts and redraw the Chipmunks that weren’t drawn on model (yes… Alvin and the Chipmunks). It was there that I learned of the design department and realized immediately that’s where I needed to be. My first professional design gig was on the Ghostbuster’s animated series for DIC, I was 22. During my second season on that job I met a fellow artist who introduced me to a place called Dinamation in Tustin Calif. We went there for a visit. By chance they told us that they were looking for an Illustrator. The previous illustrator had left to work in the film industry (that was Miles Teves by the way). They offered me the job so I took it.

Now I had two full-time jobs. I saw the work of Miles Teves and Jose Fernandez for the first time. Their work was another level of good that I wanted to be around. Neither worked there anymore but I met those two soon after starting that job. We’ve been friends since. Through that job and through some of the friends I made there I made contacts that lead me into the film industry. My first job after Dinamtion which I consider my start in film was for the Chiodo Bros. Those guys are awesome. Miles, this time was directly responsible for helping me get that job. The job was too big for one person and so he gave me a call and recommended me for the job. I met Jordu Schell there, in addition to many others who later dominated the Makeup industry. My road in was a good ride.

AvPGalaxy – Can you tell me about the genesis of your involvement with Prometheus?

Carlos Huante – I honestly had no idea that they were making this film when I got the call. I was working at the time. This is humbling for me to say but it’s true… I got a call from Arthur Max who told me that Ridley Scott had picked me out of a stack of Creature Illustrators to work on Alien Prequel… I was buzzing after that statement. Two things went through mind. A.) I couldn’t believe that they were making the movie. B) I couldn’t believe that I didn’t have to fight to get on it. Hollywood is not what it used to be… Some of the people that they hire for projects these days are nowhere near qualified for the job. Thus all the mediocrity. Some of my friends who are actual creature designers and artists don’t get called as often as they should. So this call in particular meant far more than just the job to me.

AvPGalaxy – What was your level of excitement as this was all unfolding?

Carlos Huante – After I woke up from passing out I realized I had a fixed smile on my face. I thought to myself… well here we go. Things have come full circle. I was fourteen when Alien showed here in theatres in the states. At that time I had to find eight different adults to take me to the theatre because I saw it eight times. There was no video or DVD players or anything of that kind back then. So if you wanted to see the movie again you had to pay and go to the theater. It instantly became one of my favorite movies of all time. So now back to Prometheus, I thought, I’m going to be working with Ridley on the prequel. Big smile… It was a mark in my timeline and my mind was swirling as to what I was going to do for ancestors to the Alien creature and then the much anticipated Space Jockey. 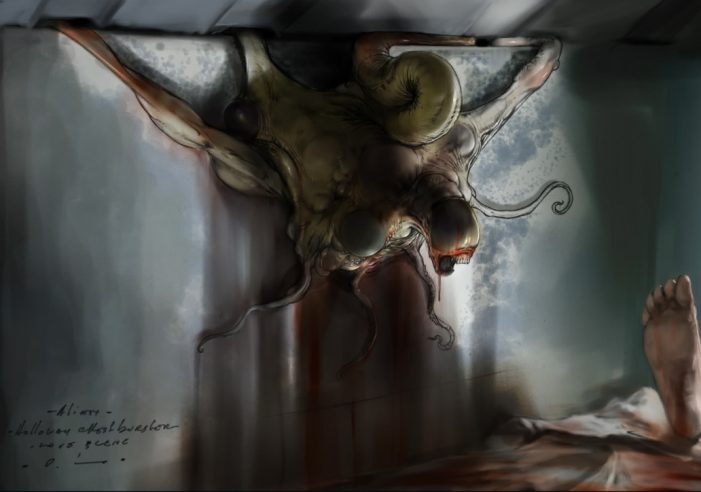 AvPGalaxy – Was there ever an ‘I’m not worthy’ moment?

Carlos Huante – Honestly no… I’ve been working at this for a very long time and I was so ready. Probably past ready. I was excited but not overwhelmed at the least. My biggest concern was to pay as much respect to the artist that created this world and I wanted to make sure if I was to design an Alien creature that it would look as if Giger worked on it. Of course with a little of me in there as well. I felt honoured to be involved and wanted to police the creature work as the designer. I had an obligation to the Director, the fans and Giger. The best position I can say for any artist to take, when the opportunity arises, don’t geek… Just be ready. Through my career I was very fortunate that I was able or better yet ready to take advantage of every opportunity that came my way. This one was no different in that respect. Albeit much more exciting than most.

AvPGalaxy – Can you talk about your first directives in terms of creature design? 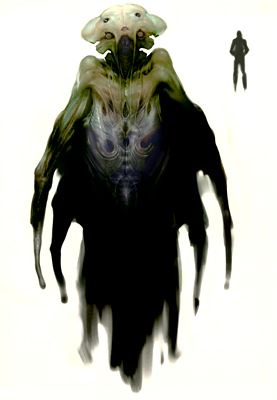 Carlos Huante – Arthur Max had given me a slight brief before our first meeting.. I hadn’t met with Ridley or read the script yet but I wanted to be able to converse on good solid ground. Arthur was great about understanding that without me saying a word. His briefing was perfect. I walked into the very first meeting prepared with the Beluga head, which pre-existed the movie. Also some color thumbnails of the moon landscape to get an idea of the vibe of the setting for the creatures and an illustration of this giant whale character which was a direction that Ridley was thinking of at the beginning for the Engineers.

All that work was unsolicited… I went at it blind to a certain degree. I wasn’t supposed to start work until after the first meeting with the director of course but as I said I wanted us to fall right into a conversation which we did. The giant whale idea didn’t last past the first two meetings, as they were still writing the script but it was a lot of fun to do. I wanted to do more.

AvPGalaxy – Were you apart of a creature conceptual department or was it just you alone?

Carlos Huante – It was just me alone at the beginning. Ridley wanted it to be just one person conceiving the creatures. He made that clear to a producer in front of me as that particular producer remarked about hiring more creature artists as the job was increasing. Ridley felt it should be one person to keep everything consistent. Which I totally agree with even if it wasn’t me. He did that with Alien which really worked. The big difference with that first film was that Giger was able to follow through with his design and realize it in 3D.

AvPGalaxy – I know Neville Page was also involved with the design aspect of Prometheus, how did you work in conjunction with him?

Carlos Huante – I never worked with Neville or at the same time as Neville on this project… I heard later that as they were sorting the characters out and the status of the film was switching into production mode Arthur had Neville working on the engineer’s costume along with some guys in the makeup shops in London who were making variations of all the stuff I had laid out as Ridley likes to tinker with things. As for Neville’s involvement and what his contribution to the film was only he could say because I don’t know.