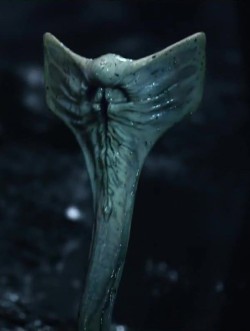 The Hammerpede is the nickname given to the cobra-like creatures seen in Prometheus. Though not technically a new creature, the Hammerpedes were a result of worms being dragged into the dark liquid. I don’t think these were indigenous worms either. It was a result of David dragging them into the chamber under his feet from the Prometheus ship. The dark liquid mutated the worms to create these aggressive snake-like creatures.

In the film, Fifield and Milburn get lost in the temple after the others have returned to the Prometheus ship. They come across the Ampule Chamber and notice the dark liquid around the urns. Two Hammerpedes emerge from the liquid and Milburn becomes fascinated by one of them and moves closer. The creature attacked him and began constricting his arm. It was strong enough to break it. Fifield then managed to chop its head off only for it to grow it back a few seconds later. The creature was also shown to have acidic blood which sprayed over Fifield’s helmet melting it. The Hammerpede then crawled into Milburn’s spacesuit and up to his helmet and into his mouth. When the characters find them a bit later in the film, the Hammerpede bursts out and escapes. It’s not clear what happened to them after that.

As I said the Hammerpedes are mutated from earth worms. The dark liquid makes them exceptionally strong. They have acid for blood just like the xenomorph. They also have regenerative capabilities. It has long being theorized whether or not xenomorphs have regenerative abilities but it clearly isn’t to the extent that was shown in Prometheus. The dark liquid most likely enhanced the worms’ natural abilities as earth worms can regenerate lost parts. 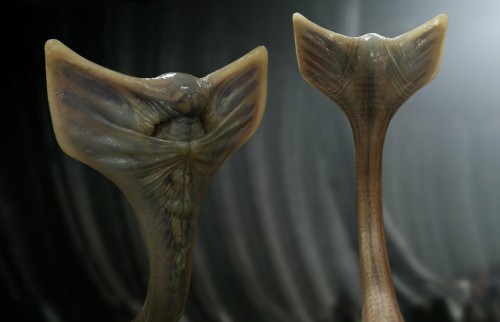 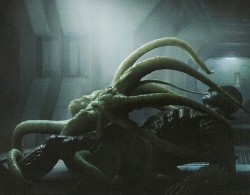 The Trilobite is the creature that emerged from Shaw’s body. It was originally created after Holloway was infected with the dark liquid who then had sex with Shaw, infecting her too. It’s still a bit of a mystery how it was created. If Holloway didn’t have sex with Shaw, would the creature have grown inside of him? Or was it simply the act of having the sex with somebody that caused it?

In the film, David reveals that Shaw is pregnant and in a matter of moments, she gets severe abdominal pain. Shaw has no choice but to perform a caesarian on herself using the MedPod. The machine removes the creature and it resembles a squid with four legs. She climbs out of the MedPod and seals the creature in there and decontaminates it. Thinking she killed it, or rendered it unconscious, she leaves.

So what did we learn about the Trilobite? Well, there are elements from the Facehugger and Chestburster stage of the Alien Life Cycle here. After Holloway infected Shaw, the creature was growing incredibly quickly inside her body just like a Chestburster embryo. It most likely would have burst out of her, killing her in the process, had she not performed a caesarian. It also grows extremely quickly into something much bigger just like the Chestburster evolves into a Xenomorph. The final creature is extremely similar to a Facehugger in the Alien Life Cycle except it’s much bigger. It still has the same features. It can impregnate people the same way although it uses its size to subdue its victims rather than jumping onto their face like a Facehugger. It also dies after impregnating its victim. 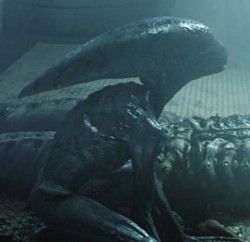 The Proto-Xenomorph, referred to as the Deacon in production, is the name of the final creature that bursts out of the Engineer in the final scene of Prometheus. It is the result of the Trilobite infecting the Engineer. The creature emerges from the Engineer almost fully developed, skipping the Chestburster stage of the Alien Life Cycle. Though in Alien 3, the ‘Runner‘ Alien emerged from the dog in a similar way but it grew bigger in time. It’s unknown if the Proto-Xenomorph was fully-formed when it emerged from the Engineer. It could have changed a little more and perhaps got bigger with time. After all, the same thing happened with the Trilobite and the Engineer is far bigger than a human being.

Fans refer to the creature as a Proto-Xeno but is still quite different in appearance to the Xenomorph. The back of its head is pointed – it actually uses this to emerge from the Engineer’s body, and its inner jaw is quite different too. It appears to have teeth and gums like a human/Engineer. Its inner jaw seems to be much bigger and it doesn’t extend as far as a Xenomorph’s inner jaw. It’s possible that the Proto-Xeno isn’t simply a pre-evolution version of the Xenomorph. The creature on the mural in one of the chambers resembles an actual Xenomorph. The film never explains how the Xenomorph in the Alien series is created as they must have existed thousands, maybe millions of years before Prometheus. It’s theorized the Engineers used the dark liquid to create them but the actual process remains a mystery.