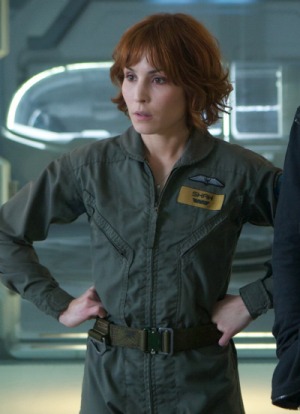 Elizabeth Shaw is a researcher and archaeologist. She’s British but was raised in Africa because her father was a missionary. Shaw finds a star map on the Isle of Skye which leads her to go on an expedition on the Prometheus to find the creators of mankind.

Shaw appears in 2012’s Prometheus and is played by Noomi Rapace while the younger version seen in her dreams was played by Lucy Hutchinson. Shaw made a minor appearance in 2017’s Alien Covenant and it is discovered that she was killed by the android David after they landed on the Engineer homeworld.

Shaw’s early life was seen briefly in her dreams during hypersleep that David was monitoring aboard the Prometheus. Shaw was raised in South Africa by her father who was a missionary, after her mother died. Shaw’s father later died due to Ebola according to David.

In 2089, Shaw and her partner Charlie Holloway go on an expedition to the Isle of Skye in Scotland and discover a star map that is related to many other unconnected ancient cultures. She takes this an invitation from the creators of mankind – the Engineers. Shaw takes this information to Peter Weyland, CEO of the Weyland Corporation, who organizes an expedition to follow the star map to the moon of LV-223 on board the research vessel Prometheus. She agrees to go on the expedition because like Weyland, she wants to find her creator.

In December 2093, the crew of the Prometheus wake up from hypersleep and director Meredith Vickers explains to the crew that their mission is to find the Engineers and not to make contact with them without her permission. The Prometheus ship lands on LV-223 next to a large pyramid structure and some of the crew including Shaw go and explore it. They discover many strange ampules, a large statue of a humanoid head and the body of a decapitated creature they believe to be an Engineer.

Shaw collects its head so she can study it later on the Prometheus. The crew find more bodies and suspect the creatures may all have died out. Meanwhile, a storm is about to hit so the crew go back to the Prometheus. David secretly takes one of the Ampules containing a dark mysterious liquid back onto the ship to study. Back on the Prometheus, the crew discover that the Engineer’s DNA matches human DNA while David begins studying the dark liquid. David later poisons Holloway’s drink with a drop of the dark liquid. Later, Holloway and Shaw have sex and Holloway inadvertently infects Shaw.

Back in the pyramid, Fifield and Milburn get lost so Captain Janek sends the crew back into the pyramid to find them. They find Milburns’s corpse and David later discovers the control room with the last remaining Engineer in stasis as well as a star map highlighting Earth. Holloway’s condition worsens and the crew take him back to Prometheus where Vickers refuses to let him back in. She burns him to death with a flamethrower despite Shaw frantically pleading with her not to kill him.

Shaw is taken to the medlab where David is looking after her. He tells Shaw that she is three months pregnant despite Shaw been unable to conceive. Shaw wants the thing inside of her taken out but David tells her the best option is to put her in cryostasis until they get back to Earth. A short time later, Shaw is in agony and rushes to the automated medical table to perform a cesarean on herself. The machine removes an alien creature from her abdomen and Shaw traps it inside.

David wakes the Engineer from stasis and asks him the questions that Weyland wants answered. The Engineer tears off David’s head and kills the rest of the crew and reactivates the spaceship. Shaw escapes and tells Janek that the Engineer is planning to release the dark liquid on Earth and he must be stopped.

As the Engineer’s Juggernaut flies off, Janek flies Prometheus into the craft, sending it plummeting back onto the moon. Vickers escaped just before the impact but gets killed on the ground as the Juggernaut rolls to a standstill. Shaw goes into the lifeboat and finds the alien creature she removed earlier has grown considerably. David’s detached head warns Shaw the Engineer survived and is heading towards her. The Engineer breaks into the lifeboat and grapples with Shaw.

She manages to open the door and the alien attacks the Engineer. The alien quickly overpowers the Engineer while Shaw escapes. She recovers David’s head and his torso and flies off in another Engineer spacecraft. She intends to reach the Engineer homeworld and ask them why they wanted to destroy mankind.

Shaw managed to reattach David’s head to his body aboard an Engineer’s ship and they set coordinates to the Engineer homeworld. Shaw goes into hypersleep in one of the Engineer’s stasis pods and David takes over the Engineer ship. When he reaches their planet, he unleashes the pathogen onto the Engineers, killing them all.

At some point, Shaw makes a distress signal which is picked up by a colonization ship – the Covenant. They go to investigate and discover David the android as the planet’s only inhabitant. He tells them that Shaw died when their ship crashed and that he buried her in the Citadel. Walter later discovers Shaw’s badly mutilated corpse and found out that David killed her to further his creature experiments.

Elizabeth Shaw is a very experienced archaeologist and possesses advanced knowledge in a wide range of ancient cultures. She’s very intelligent and is killed in various medical and forensic procedures. Shaw has very strong Christian values and had a religious upbringing while in South Africa with her father. She lost both of her parents at a very young age. She has a strong inner self, can be very stubborn and determined. She’s very optimistic, and full of hope.

NECA released a 7″ figure of Shaw in April 2017 with accessories including her helmet and axe.