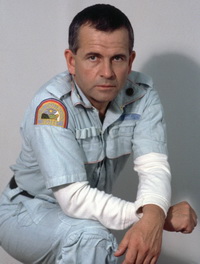 Ash was the science officer aboard the commercial towing ship, the USCSS Nostromo and unknown to the crew, he was an android, specifically a Hyperdyne Systems 120-A/2 Synthetic. He was on the Nostromo in 2122 when it received a distress signal on LV-426 and they brought an alien organism back onto the ship. Ash was destroyed by Parker, Lambert and Ripley when he tried attack Ripley. In Alien, Ash was played by Ian Holm.

Ash was an android created by Weyland-Yutani at some point at the beginning of the 22nd century. The company detected the distress signal coming from the Derelict Spacecraft and made sure that Ash was assigned to the Nostromo. He was there to make sure that the crew retrieved the alien creature for Weyland-Yutani as they knew the Nostromo crew would encounter it. Captain Dallas stated to Ripley that Ash replaced the existing science officer two days before they left Thedus.

In the year 2122, the Nostromo’s computer systems woke up the crew because it detected a distress signal coming from a nearby planetoid. Despite Brett and Parker’s protests, Ash pointed out, along with Dallas, that it was part of their contracts and if they didn’t check out the signal, they would lose their personal shares in Weyland-Yutani. Ash claimed he didn’t know what the distress signal was but after the crew land on LV-426, Ripley concludes that it was a warning signal and not an S.O.S. signal.

Kane, Dallas, and Lambert tracked the signal to a Derelict Spacecraft while Ash observed what they were seeing on the monitors. Later, Dallas and Lambert brought an unconscious Kane back to the ship but Ripley refused to allow them entry citing quarantine procedures. Ash overrode the door manually and allowed them on board. Ripley was unhappy at his decision and became suspicious of him. 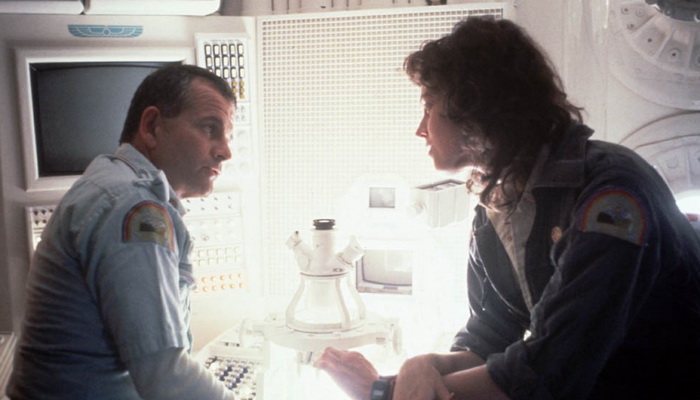 Ash and Dallas attempted to remove the Facehugger attached to Kane by surgically removing one of its fingers. Instead, acid spilled out and burnt through several decks. The creature then fell off Kane and died which Ash began dissecting to learn more about it. He learnt that the creature could replace its cells with polarized silicon, making it resistant to adverse environmental conditions.  Kane later regained consciousness and the crew sat down for one final meal before going back into hypersleep.

Soon, Kane began convulsing and a Chestburster ripped its way out of Kane’s chest. Parker was going to stab it while Ash immediately told him not to. The Chestburster then disappeared into the ship. Ash made a motion tracker which detects micro changes in air density and gave it to Brett, Ripley and Parker as they searched for the creature. After Brett was killed, Dallas realised it was using the air ducts to move around. He volunteered to go into the vent and was taken by the xenomorph. Ripley became even more suspicious of Ash after he failed to come up with any solutions so she consulted with the ship’s computer, MU-TH-UR, directly.

Ripley learnt of the Special Order 937 which was an order Ash was given by Weyland-Yutani to ensure the safe return of the alien to the company and all crew were expendable. Ripley confronted Ash and began locking the doors so Ripley couldn’t escape. All of a sudden, a white droplet ran down Ash’s face indicating to Ripley that he was an android.

He attacked her, and tried to force a magazine down her throat. Parker saved Ripley by knocking Ash’s head off with a fire extinguisher and they finally realised he was an android.  Ash was still moving after being decapitated so Lambert stabbed him in the back with a cattle prod. Ripley then reactivated his head and asked him for more information about the xenomorph. Ash didn’t give much meaningful information and stated that he ‘admired its purity’. Ripley deactivated Ash and Parker torched him with the flamethrower.

As a result of Ash’s behaviour on the Nostromo, Ripley had a constant mistrust of androids in general as shown by her early feelings towards Bishop on the Sulaco in Aliens. When Burke told him about what Ash did, Bishop stated that this particular model of android was prone to malfunction. Bishop said that new androids all have a behavioural inhibitor to prevent them directly or indirectly harming another human being.

Ash could replicate human emotions to a point where he deceived the entire crew of the Nostromo. As the Science Officer, he always spoke in a clam manner and he was clearly very intelligent. He seemed to have no problem in sacrificing the entire crew to complete his Special Order and made many erroneous decisions. Ash made sure that the crew landed on LV-426 and he deliberately ignored Ripley’s orders about not letting Kane and the Facehugger onto the Nostromo.

Ash claimed he didn’t know what the distress signal was when he was fully aware of it before they even left Thedus. Ripley became suspicious of his behaviour and Ash attacked them when she confronted him. Many people see the ‘ramming the magazine down Ripley’s throat’ as a metaphor as Ash couldn’t physically have sex with somebody so this was effectively his way of ‘raping’ Ripley with a magazine.

When Ash’s head is knocked off, a puppet was created for Ash’s body and was operated underneath it by a puppeteer. When Ripley reactivates Ash’s head, parts of the scene was shot with actor Ian Holm kneeling under the table with his head poking out while other shots contain an animatronic head based on a cast of Ian Holm. Unfortunately, the foam rubber shrank as it dried and the animatronic head didn’t really look like the actor.

There was insufficient time and money to make another one so the filmmakers had to make do with that one. You can easily notice which shot contains the actor and which one is the animatronic when it’s flipping between them. A fun fact is that Ash’s insides were made from milk, pasta, caviar and glass marbles.

There is a deleted scene where Ash makes another poor decision at the expense of the remaining crew. After Dallas is attacked, the Xenomorph is at the main airlock and is ready to be jettisoned into space. Parker tells Ripley and Lambert to seal the airlock. At the last moment, Ash triggers an alarm scaring the Xenomorph away. Part of it gets caught in the door and spills acid that quickly burns through the hull. Ripley comes to help Parker but they fall unconscious due to decompression.

Lambert and Ash then save them. Following this, Ripley suspects Ash was responsible and the scene ends with Ripley going to the ship’s computer to consult with MU-TH-UR. You can find part of the scene in the Alien Anthology Deleted Scenes featuring Ripley and Lambert talking on the bridge but the airlock sequence was reportedly never filmed.

NECA released their first ever figure of Ash in 2021 as part of Alien 40th Anniversary Series 3.