Dan O’Bannon is the unsung hero of Alien. An integral part of a trinity of creative masterminds responsible for the classic sci-fi horror Alien alongside Ridley Scott and H.R. Giger. Without any one of those three creators, Alien would not have been the classic we know, and yet, moviegoers are often less familiar with Dan O’Bannon as they are with Ridley Scott or H.R. Giger.

To kick off the 40th Anniversary of Alien, we have the release of Director Alexandre O. Philippe’s Memory: The Origins of Alien. While my initial reaction to hearing about this documentary was “how much more can we really learn about the development of Alien?” after seeing it myself, it’s clear to me that well is deeper than I thought. 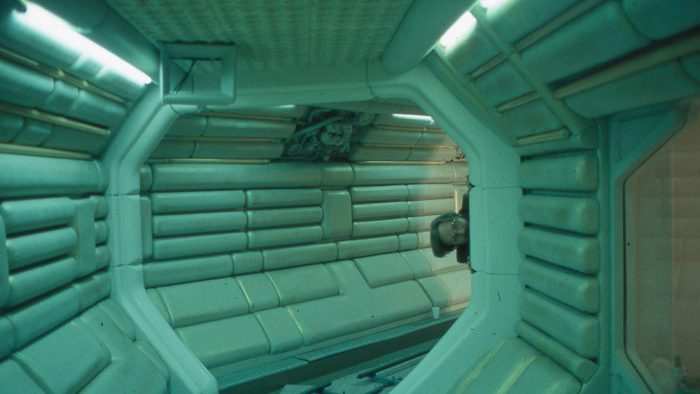 “I didn’t steal Alien from anybody. I stole it from everybody!” -Dan O’Bannon, screenwriter of ‘Alien’

Memory premiered during the Sundance Film Festival at the end of January, kicking off their ‘Midnight’ category of films that were primarily focused on horror and other boundary pushing projects. It’s fitting that the film’s premiere took place at The Egyptian Theater in Park City, Utah, as one of the focuses of the film is on the power of myths, on how they influenced Alien, and how Alien itself has become something of a modern myth culturally. As we learn in the film, Giger had an affinity for Ancient Egypt in particular. Ironically enough Alien itself premiered at the more famous Egyptian Theater in Los Angeles in 1979.

You might already be getting a sense that this is a different kind of look at Alien than we’re used to, especially when compared to the behind-the-scenes documentaries that we’ve had the pleasure of enjoying until this point. That distinction is exactly this film’s greatest strength. Essentially, the documentary is a hybrid of a film essay look at Alien in the context of mythology and how it connected with audiences, as well as a celebration and more personal look at Dan O’Bannon, the sci-fi master who we sadly lost to Chron’s Disease.

This documentary surprised me right from the start, as the film opens with a dramatic scene blending the aesthetic of the Nostromo that we’re familiar with and a dark vision of Greek Mythology. I don’t want to go into the actual details of this film too much, as much of the enjoyment for a viewer who knows and loves Alien will likely come from how unexpected an analysis this is. The fact that I’m concerned about spoilers for a documentary is a sign of its incredibly unique nature. 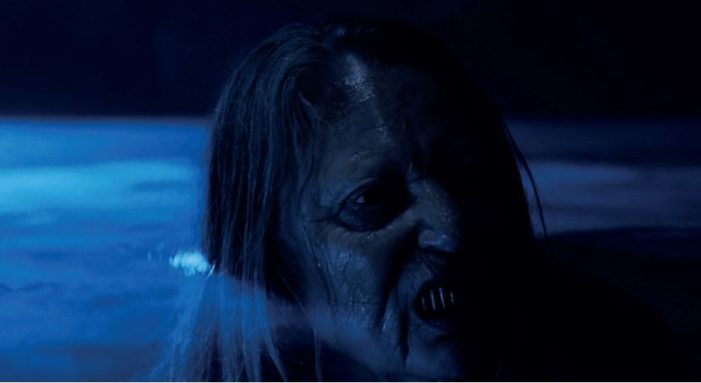 We’ve been seeing more and more of these kinds of film essays, where documentaries about cinema can become art films themselves. Examples such as Room 237, Hearts of Darkness, and one of my personal favorites, Jodorowsky’s Dune come to mind. That lost Dune project essentially had to die for Alien to be born (fittingly), and that project is briefly touched upon here.

I had only watched one film from Philippe prior to seeing Memory, and that was The People Vs. George Lucas some years back. That documentary explored the divide between Lucas altering his Star Wars documentaries and making it difficult for fans to watch the original versions. Philippe also premiered another film at Sundance two years back, one that found wide acclaim in the cinephile crowd: 78/52.

78/52 focused the entire documentary on a single scene: the infamous shower sequence in the classic Psycho. This was an approach that Philippe had originally planned for Memory, giving us a deeper dive into the infamous chestburster sequence, but over the course of making Memory Philippe connected with Dan O’Bannon’s widow, Diane. As Philippe immersed himself into Dan’s archive, it became clear to him that there was much more of a story to tell here.

Philippe told us in our interview, to him Memory is about “the resonance of myth, and our collective unconscious.” Myth is a theme repeated and elaborated on plenty throughout Memory: how Alien was inspired by certain myths and has itself become a modern myth

As for our collective unconscious, the documentary asserts that Alien tapped into a number of cultural issues, of the time – the end of the 70’s and entering the 80’s, as well as deeper themes and inspirations that might not be apparent upon first glance. This is a documentary where the audience is asked to think about Alien from different angles and other levels.

We have several interview subjects shown in eerie lighting who discuss with us the impact of Alien on them and on audiences. Mainly film academics, some of whom I recognized like Ben Mankiewicz from Turner Classic Movies and the ‘What The Flick?!’ Podcast.  There are also familiar faces like Veronica Cartwright, Tom Skerritt, and Ronald Shusett. 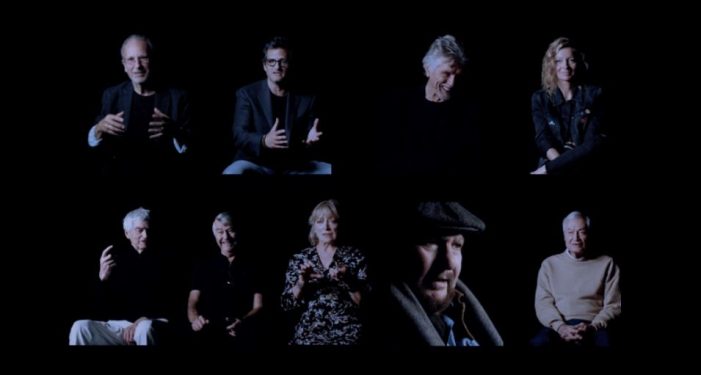 Notably absent are actress Sigourney Weaver and director Ridley Scott. Philippe has said that he attempted to bring them on the project, but it didn’t work out. Though, as he also told AvP Galaxy, it may have felt tonally different to have one of the three creators in the absence of the other two. Some of the most impactful interviews, for me, were of the widows of H.R. Giger and Dan O’Bannon: Diane O’Bannon and Carmen Giger, who also both serve as Executive Producers for the film.

There are only a few flaws I can think of regarding Memory that I feel hold it back. Mainly, I just wanted there to be more. While the ending words were fantastic, it did feel like it ended a bit abruptly. There were times when I also felt the documentary got a bit lost with some of its more academic interviewees. Namely a few symbolic examinations of Alien which I felt like were too much of meandering tangents from the main conversation.

Memory is not only about a cultural and mythological look at Alien. There is a prominent focus into Dan O’Bannon’s life, particularly how passionate he was about Science Fiction from an early age, and the influences he emulated into his stories. 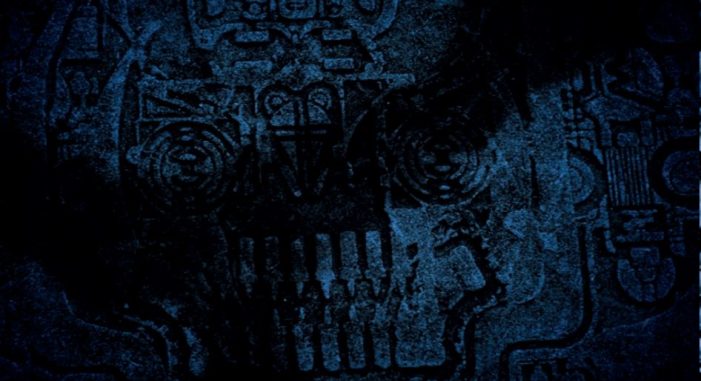 With O’Bannon struggling after the Dune project he was involved with fell apart, he returned to his original idea of ‘Memory,’ and with the help of Ronald Shusett developed the early 30 page script into what would become Star Beast, which would further evolve into Alien. There were influences for Alien shown that even I as a longtime die-hard fan was completely unfamiliar with. O’Bannon himself had some sketches for the film and the creature that are being shown for the first time to my knowledge.

Giger is also discussed in Memory, but to a lesser extent than O’Bannon. I had never realized just how resistant the studio was to Giger’s involvement, which seems as if would never have happened if not for O’Bannon and Scott advocating for him as much as they did.

In the last act of Memory, we get an extended look and analysis of the chestbuster scene, and the influences behind the chestburster itself. A good portion of this part most fans will already know, such as the foul smelling meat used for the guts of Kane that stank up the entire set. Regardless, the focus on every part of this scene is an impressive revisiting. New to me were some of the burster’s speculated origins, such as a 1944 painting by artist Francis Bacon ‘Three Studies for Figures at the Base of a Crucifixion.’

Memory very briefly uses some clips from previous behind-the-scenes material, only to emphasize its own points and explanations. The topic of the prequels is brought up also quite briefly, and some of the commentary regarding that I found quite amusing. One of the interviewees said about the chestburster scene in Covenant that it played out like an early discarded draft of the one we had in Alien, though admitted that to him it was also “really quite delightful if you give into it.”

I loved Memory, though I don’t know if its cinematic arts approach will be for everyone. There were only a few bits that held it back for me personally, mainly some tangential film academic examinations and perhaps an unsatisfied desire for even more of a look at O’Bannon and Giger. It got most of the way there, but I couldn’t shake the feeling of the potential for more. These nitpicks are subject to personal preference of course and will highly depend on how familiar with Alien and its history the viewer is.

Overall, this is a timely and sophisticated account of the role Dan O’Bannon had in the genesis of Alien, and a completely unique exploration into how and why Alien captivated audiences like it did. If you’re as passionate about cinema and Alien as Philippe clearly is, you’re sure to find this to be a fantastic documentary celebrating the classic that is Alien and the power it still holds 40 years later.

From Adam Zeller (‘RidgeTop’) for AvPGalaxy, I award Memory: The Origins of Alien 8 out of 10 stars.