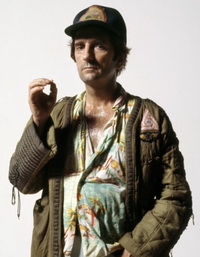 Samuel Elias Brett was the engineering technician on the commercial towing vessel, the USCSS Nostromo. He was on the Nostromo in 2122 when it received a distress signal on LV-426 and they brought an alien organism back onto the ship. Brett is killed by the xenomorph. In Alien, Brett is played by Harry Dean Stanton.

Brett served on the USCSS Hurd before he was assigned to the Nostromo.

In the year 2122, the Nostromo’s computer systems woke up the crew from hypersleep because it detected a distress signal coming from a nearby planetoid. Both Parker and Brett were opposed to landing on LV-426, saying they weren’t getting paid enough to do this but Dallas and Ash pointed out they would lose personal shares in the company, should they not go investigate the distress signal.

The crew landed on LV-426, damaging this ship because of the planetoid’s atmosphere. While Dallas, Lambert and Kane went out to find the signal, Brett and Parker stayed on the ship to work on the ship repairs. An injured Kane was brought back by Dallas and Lambert, and Dallas ordered the ship off LV-426 despite the repairs being unfinished.

After a Chestburster burst out of Kane, Brett made a few cattle prods and some nets to catch the alien. Brett, Ripley and Parker formed one team and set out to look for it. They first noticed something on the motion tracker which turned out to be Jonesy, Ripley’s cat, but Brett foolishly let it go. Parker ordered Brett to go and find it so that it wouldn’t trigger the motion tracker again. Brett set off on his own to find the cat and discovered something else instead.

He found some sort of chrysalis which indicated that the Chestburster and morphed into something much bigger. As Brett tries to entice the cat out of its hiding place, the Xenomorph drops down below Brett. Brett turns around and is completely shocked by what he saw. The alien attacks him and performs a head-bite attack, killing him and Brett is dragged away up some chains into the air ducts.

In the 2003 Director’s Cut, there is a scene showing Ripley finding Dallas cocooned to the wall. Next to him, is Brett who is in the process of actually transforming into an Alien Egg. Dallas begs Ripley to kill him and she incinerated both Dallas and Brett with her flamethrower.

Like Parker, Brett was always complaining about money and wanted more pay to investigate the distress signal as it wasn’t in his job description. Brett was the quietest and laid-back member of the Nostromo crew though he did make the cattle prods and nets to capture the alien.

There was a deleted scene that was cut from the final film. After Kane was killed, Brett actually comes up with the idea to use cattle prods and nets to capture the escaped Chestburster.

NECA released their first figure of Parker in 2020 as part of Alien 40th Anniversary Series 2.