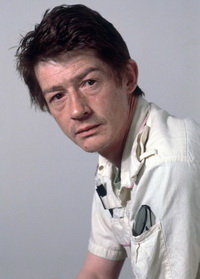 Gilbert Ward Kane was the executive officer on the spacecraft, the USCSS Nostromo. He was on the Nostromo in 2122 when it received a distress signal on LV-426 and they brought an alien organism back onto the ship. Kane was attacked by a Facehugger in the cargo hold of the Derelict Spacecraft and a Chestburster burst out of him when he was brought back on the Nostromo, killing him. In Alien, Kane was played by John Hurt.

Kane studied at Weatherly Private School, Gunning Foss Military School and eventually studied medicine at Watkins Medical University. Unfortunately, he became addicted to medication and was expelled from the university. He then went to Wellington Academy in England and acquired a Masters in engineering and a pilot’s license.

He served as Executive Officer on the UKMS Outreach but his addiction to medication ended his time there again and became an alcoholic. Kane was then transferred to a commercial towing ship called the UKCS Powell where he became Captain and then served as Executive Officer on the UCSS Giler. By this point, he no longer had a dependency to drugs or alcohol and he was then transferred to the Nostromo.

In 2122, the crew of the Nostromo was woken up by the ship’s computer when it detected a distress signal coming from a nearby planetoid, later known as LV-426. They landed on LV-426 and Kane, along with Dallas and Lambert, was part of the group that went out to find the beacon. They soon discovered a Derelict Spacecraft and found the fossilized pilot fused to its chair. Kane volunteered to descend through an acid-burnt hole in the floor near the Space Jockey. As Dallas and Lambert lowered him into the ship’s cargo hold, he discovered countless Alien Eggs shrouded in blue mist.

When he touched the blue mist, it appeared to trigger a short alarm. He slipped onto the floor with the Eggs and looked at one of them more closely. He noticed something moving inside and before he knew it, a creature, known as the Facehugger, jumped out, burning its way through Kane’s helmet and fusing itself to his head. Dallas and Lambert carried a now-unconscious Kane back to the Nostromo. After Ripley refuses to allow them entry on the ship, Ash overrides the door manually.

Kane is taken to the medical bay where the science officer, Ash, takes a look at him. They discover that the creature is wrapped around his head tightly and is feeding him oxygen so removing the Facehugger might actually kill Kane. Dallas and Ash tried severing ones of its fingers only for acid to pour out and burn through the floor. Some time later, the Facehugger falls off Kane itself and seemingly dies. Kane regains consciousness and before the crew enter hypersleep, they site down for one last meal. As they ate their food, Kane began convulsing and a Chestburster violently burst out of his chest and escaped into the ship, killing Kane in the process. Kane’s body was then wrapped up and jettisoned from the Nostromo.