So Alien: The Illustrated Story is the third long out-of-print Alien book that Titan Books are re-publishing, after the Book of Alien and the Aliens Tech Manual earlier this year. It was originally published way back in 1979 by Heavy Metal. It was written by Archie Goodwin and the artwork was done by Walt Simonson. I guess this comic is what sparked the entire Dark Horse comic series to take off. I must admit I’ve never read the original version and I’ve only seen occasional screenshots of the comic over the years. 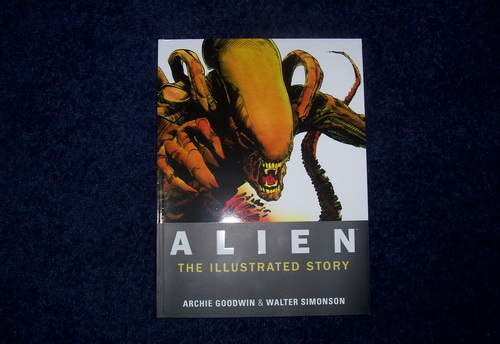 The comic was written by Archie Goodwin who is well known for writing and editing Creepy and Eerie for Warren Publishing and adapting Star Wars for Marvel Comics. The comic is a straight forward movie adaptation. I guess by now everybody has seen Ridley Scott’s Alien. It’s about a crew of a spaceship called the Nostromo coming across a distress signal on a unknown planet. They investigate and discover a derelict spacecraft which they explore. An alien creature attacks a character called Kane and the other crew bring him back onto the ship. After some time, a Chestburster bursts from his chest and quickly grows into something bigger. It kills the entire crew one by one leaving Ripley the sole survivor. 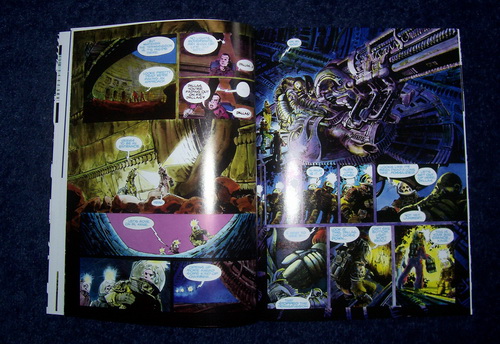 The comic is only 64 pages long and theoretically, it would have been a difficult task bringing a 2 hour+ movie to a comic book but you know what? It actually works. The comic includes all the important scenes from Alien with a couple of extra scenes that weren’t really featured in the film. The comic tries to keep all the horror and suspense of Ridley Scott’s classic. Even though the dialogue has been cut down drastically, it still captures the characters’ personalities quite well. 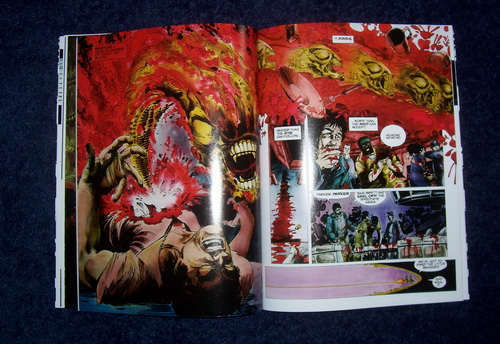 The artwork was done by Walt Simonson who has worked on many comics including Batman, Fantastic Four, Hulk and Superman. For this release, Titan Books have restored the original artwork. It’s more vivid , brighter and sharper. You can definitely notice the difference from the 1979 release. I’ve often felt the artwork in the 1979 release to be a little dated by today’s standards but this new release does make a heap of difference. The unique style of the character art takes a little getting used to but there is some really amazing shots of the Space Jockey, Chestburster and Xenomorph. The artwork also doesn’t shy away from the blood and gore of the original film. It captures those moments perfectly. 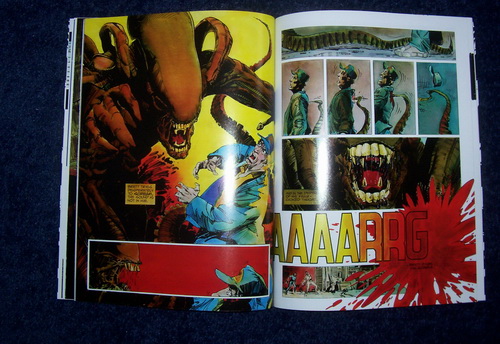 Titan Books are publishing a few different versions of this book. The paperback version, reviewed here, goes on sale on the 4th September for about $10/£6. There is another one that is a replica of the 1979 edition which is exclusive to comic book stores. There will also be two ‘Original Art’ hardcover editions due out in October. The artwork is the same size of the original artwork (14″ x 17″) and will feature the original black and white artwork. One version will be signed and distributed by Diamond Comic Distribution and is limited to 2,300 copies. There’ll be a special signature page, custom-illustrated by Walter, which will only appear in that edition, and it will have a retail price of $75. The other version isn’t signed or limited and has a retail price of $40.

I’d definitely recommend the comic to any comic / Alien fan out there. I believe it’s one of the best movie adaptations out there along with the Star Wars films. For any hardcore fans out there, you might want to wait for the hardcover editions due out in October.