“On a distant, frozen world, “artificial persons” are manufactured in discreet seclusion. With formidable new security synthetics coming online, how better to test their mettle than against a hive of deadly xenomorphs? But as Socialization Specialist Jean DuPaul sees her ever-more-human android charges sent to their destruction, she learns that the most savage species in the universe is man.”

Since Dark Horse released the omnibuses 6 years ago, Aliens fans haven’t really had much to be happy about. We’ve had the averagely received Aliens – More Than Human and AvP – Three World War which had looked to be the start of a new set of ongoing series. We’ve also had the abysmally disappointing Aliens – Colonial Marines and the love-it-hate-it sort-of prequel Prometheus.

Most recently from Dark Horse was Liam Sharp’s novella Fast Track to Heaven in 2011. It looked great but ultimately the story fell short, a downside to the novella format in my opinion.

April 2013 has seen the release of Inhuman Condition, another novella, this time collecting a story first published in Dark Horse Presents #12-17. Inhuman Condition comes from the typewriter of John Layman and Sam Keith returns to do the artwork. 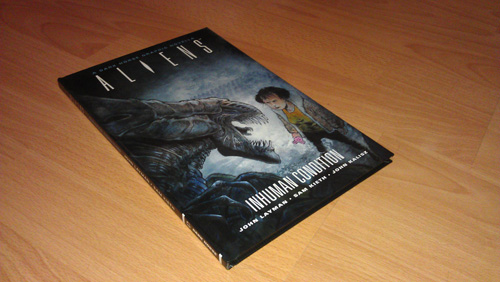 I hadn’t initially intended to pick this book up because I knew Sam Keith would be doing the artwork. I’ll put this straight out there – I don’t like his art. In my opinion his inclusion on Female War ruined that book and that is a consensus shared by the majority of the Aliens readership.

I understand that he is a critically acclaimed artist but I just don’t think his style suits the franchise. He reduces the Aliens from a work of art to a generic blob of grey with disconnected jaws. They no longer look like the terrifying beauty that Giger created but a caricature of the menacing creature we all love.

The same can definitely be said about his human characters – in particular Karl Bennett, the evil vice-president of Weyland-Yutani. It looks as if Sam Keith didn’t take the project seriously and it genuinely detracts from the story.

I’ll give him his dues in that one way of looking at his artwork is that it appears like a distorted view on reality which, when the reveal surrounding the main character comes out, does seem to fit in retrospect but in general it just makes Inhuman Condition an unattractive comic and when the format is based heavily on the visual elements it’s not very good or inviting to prospective readers flicking through the pages in the book shop. 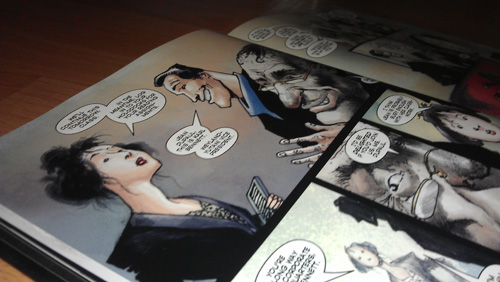 John Layman leans his story away from the Aliens somewhat, preferring to deal with the ethical issues surrounding androids. Inhuman Condition is set within a Weyland-Yutanti synthetic manufacturing facility and the main character of the book is Jean Dupaul, whose job is to humanize the artificial people so that they can better fit into society.

The notion of ethics surrounding androids has been touched upon before in Aliens literature, particularly in Stronghold where I think the issue is somewhat more blatant and in your face. For Inhuman Condition Layman really has some fun with it in terms of how the ethics of it affect the human characters.

Whereas Stronghold is very obvious and brutally puts across how wrong it is to abuse synthetics, it still ends with one of the main characters saying “oh, they’re just machines”, Layman actually goes further with our protagonist stepping up for the artificial people under her care and going as far as she can.

Layman manages to include what feels like a lot of information, both story exposition and character development, into the small number of pages. He keeps the pace nice and steady and we move along at a good speed, not feeling like everything has just flown by.

I think the most interesting aspects of Inhuman Condition comes with Depaul when Layman makes the big reveal. I’m going to spoil it now so skip ahead to the end if you don’t want to see this. Jean Dupaul survived an ordeal when the Aliens attacked the facility, seeing her husband be ripped apart by Aliens. 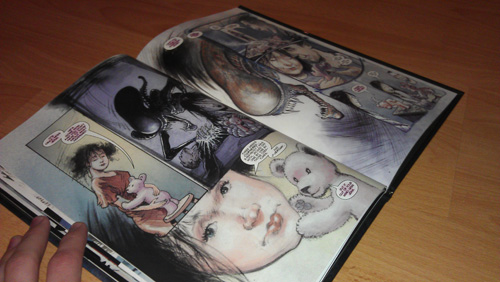 As the story progresses we learn that they had planned to have a child and her husband, a synthetic creator, had built an artificial bear to teach their child. As the story unfolds we learn that this hadn’t in fact been the case and that Jean had constructed a fabricated reality to deal with the incident and had continued to live it after.

The bear was something that was mentioned when Layman and Keith were doing some promotion for the book and it was one of the first things you’ll see when you open the book. It makes perfect sense for this bear is be able to talk when we’re presented with the idea that it was constructed by a synthetic creator. What we later find out is that it is another fabricated product of Jean’s mind.

Dealing again with the ethical situation, the administrator of the facility, discards his old stock of androids when they get the contract to develop new lines, and sends this old stock into a nearby Alien hive to wipe them out – both the Aliens and the obsolete artificial people. In protest Jean Dupaul goes with them, into the Hive where she purposefully allows herself to be impregnated – telling the Queen she “has something I want” and returns to the facility for one final act of revenge.

What I really liked here was the potential for a character that is incapable of having children and a story surrounding her quest to do something similar. I really love it when these stories also introduce an additional layer of the psychological damage done as a result of encounters with the Aliens.

Like Fast Track to Heaven, it just doesn’t feel like Inhuman Condition comes away with having left any particular impact as there’s not much room in there to do anything. It isn’t a story that’ll change the face of the Aliens franchise but it’s a fun enough read that touches upon some interesting aspects. I’d be interested in seeing some more longer stories from John Layman. 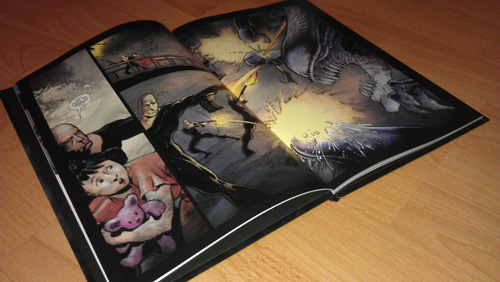 Sam Keith’s artwork still doesn’t attract me but unlike his work on Female War, his style fits into Inhuman Condition once you find out the big reveal of the story. On subsequent reads it fits in more with the reader having that foreknowledge of the story.

I really wish that Dark Horse would give us some meatier stories set in the Aliens universe, stories that take the franchise somewhere and make an impact. It’s been far too long since we’ve had anything that really treads on new ground. With Prometheus, it must have opened up the door for new explorations.

From Corporal Hicks here at AvPGalaxy.net, I award this latest release from Dark Horse with a 2.5 out of 5.