“At the farthest reaches of the solar system, Ellen Ripley awakens on board the space station “Auriga”. Her last memory is of her own fiery death. And yet she is somehow alive. Ripley discovers that her “resurrection” is a result of an incredible experiment which has altered both her and the creature she has been carrying. To combat the incalculable alien menace, she teams up with a renegade band of space smugglers.”

Alan Dean Foster was the man responsible for writing the first three Alien film novelizations and like the director of the latter film, Alan Dean Foster had such a bad time working on the novelization for the film that he refused to have anything to do with the next (and he was offered). The job instead fell to the late A.C Crispin.

I’m going to try and keep the spillage of my opinion on the film itself to a minimum but I feel happy to say that Ripley 8 was, in my opinion, a fantastic character and one of, if not the, best thing about Alien Resurrection. Her connection to the Alien offers so many possibilities that have always made me want to see an Alien 5 follow Ripley 8.

Crispin’s handle on Ripley 8 really made the novelization for me, taking my favourite character and truly getting into her head and exploring her connection to the Aliens and unlike the final film, utilizing the genetic memory that the Aliens gave her to develop her further.

Through her connection to the Aliens, Ripley 8 would often find herself conflicted with her longing for companionship – especially with the Aliens and returning to the “crèche”, a term I ended up loving. It made a surprising refreshing change to some of the typical terminology in the Alien novels. Crispin would often have Ripley describe herself as if she was an Alien warrior which added to that confusion even more.

Something I really enjoyed that A.C Crispin did was use the notion of the genetic memory of the Aliens (something touched upon only slightly in the final film) to develop Ripley’s history and have her find her connection to humanity. I loved all the slight nods and memories that would crop up over the course of the novel. It really helped tie the novel that much deeper into the Alien continuity and made it clear Crispin wasn’t ignoring what came before Alien Resurrection.

Whilst the novel made good use out of Ripley’s connection to the Aliens and the genetic crossover, it also did something that I’m sure will turn a lot of people away. As Ripley understands what its like to be an Alien, the crossover also allows the Aliens to understand humanity in similar way and it’s something I really couldn’t get into.

I’m quite open-minded when it comes to the franchise but the one thing that I truly dislike is anthropomorphizing our extra-terrestrials. It’s the reason I dislike the concept of the Yautja for the Predators. She had us inside of the Aliens head. They were referring to themselves in human terms and reading English writing.  The way Crispin wrote the point of view of the Aliens was quite understandable given the genetic crossing but it just didn’t sit well with me – like many elements of the film, understandable but not necessarily the way to take things forward. 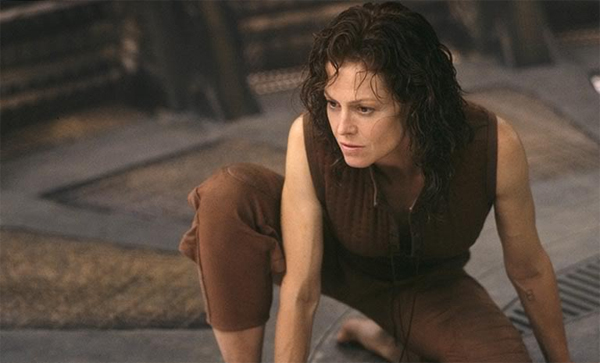 I thoroughly enjoyed how Crispin got inside the head of Ripley 8 and used the genetic memory of the Aliens to develop her.

I mentioned earlier that I enjoyed Crispin bringing up old lines and memories to help develop Ripley, she uses it in a similar way by having the Aliens refer to themselves by Ash’s infamous monologue in Alien – “the perfect organism”. It was really quite off-putting.

Just to go back to the source material briefly – One of the reasons that I think Alien Resurrection didn’t work was the comedic style of director Jean Pierre Jeunet and the comical portrayal by some of the actors (I’m looking at you Dan Hedaya!). The novel completely loses that because it’s not a visual medium, of course.  That said, it can’t escape Whedon’s dialogue for Alien Resurrection but without the visual gags employed in the film, the novel retains a sense of seriousness that really helped me get into it.

Crispin does sneak in some questionable prose of her own but nothing overly distracting. In fact, I found the Alien Resurrection novelization far easier to read then Alan Dean Foster’s previous work. In our Alien 3 review I talked about how he had a very 2001/poetic style that I loved but that he was often jumping around perspective, causing some very jarring reading. Crispin reads in a much more traditional way that is less work to get into.

I would have liked her to have used shorter chapters to help the pace of the novel but that isn’t a major complaint.

The job of any good novelization is often to expand what is seen on the film. I mentioned earlier she did this very well with Ripley 8. Another area I really liked Crispin’s expansion was in the people behind the whole endeavour – the scientists of the Auriga.

Instead of some slightly weird man who goes completely crazy at the end, we get an insight into Gediman as a man who cares very deeply for the work he is doing (and he still goes crazy). We get a bigger reaction from the scientists during the implantation and confrontation with Dr Wren showing that they are in fact human.

There are also lots of other smaller changes and developments with the characters that really improved the experience for me. Distephano was given a larger presence throughout the novel, Purvis was given further backstory (and a reason for his delayed chest-bursting was also given – he had low thyroid function) and even General Perez was made to come across as actually competent. 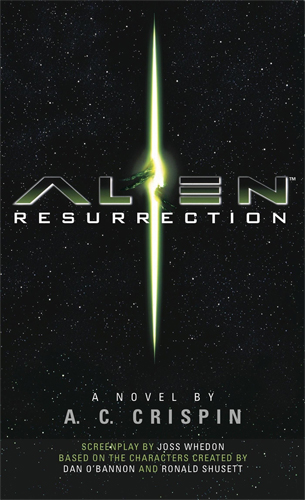 The cover art for the Alien Resurrection novelization.

There are a small number of alternate/deleted scenes included in the novel that include the alternate opening sequence, the extended surgery, her recollection of Newt during the flashcard scene and the extended dialogue in the chapel. None of the alternative endings on Earth or the garden sequence are used.

One difference unique to the book is when the crew find Purvis and they find the Aliens have been hiving and cocooning the scientists which was nice addition.

I don’t look at the film novelizations as something I can give a rating too. I simply think they should be read. The differences are really interesting to read and experience. I think that A.C Crispin’s Alien Resurrection novelization probably has the most expansion out of any of the adaptations.

I genuinely had a better experience reading the novel than I did watching the film. As with Alien, Aliens, Alien 3 and even the Aliens vs. Predator novelization (I haven’t read the Predator ones yet but I’m on the hunt), I recommend you give this novel a read.