Comprehensive and definitive volume telling the complete story of how Aliens was made, featuring new interviews with some of the cast and production crew, and including many rarely seen photos and illustrations from the Fox archives.

As one of the most highly regarded movie sequels of all time, Aliens quickly embedded itself in the minds of cinemagoers around the world when it was released in 1986. Driven by the singular vision of director James Cameron and guided by producer Gale Ann Hurd, its relentless action and unforgettable characters helped cement its place as an undisputed classic of 1980s cinema.

The Making of Aliens tells the complete story of how Cameron and Hurd, together with their immensely talented cast and crew, brought heroine Ellen Ripley back to the big screen-and upped the stakes by introducing a whole army of aliens for her to face. Interviews with the cast and crew, alongside revealing photography and fascinating concept art, illustrate the film’s eventful journey from its beginnings as a sequel that nobody wanted to make through to its transformation into one of the highest-grossing blockbusters of the decade.

Following up his fantastic The Making of Alien, Titan Books and J.W Rinzler released The Making of Aliens at the end of August. While he was well known among Star Wars and Planet of the Apes fans, I wasn’t familiar with Rinzler prior to The Making of Alien and as far as I am now concerned Rinzler has cemented his place in the ranks of the amazing Alien historians.

When I reviewed The Making of Alien, I wrote about how the first question I always used to ask with new making of ventures was what new thing I could possibly be told. Rinzler taught me that there’s actually a lot of the story of these films that aren’t known.

So I never even questioned it with The Making of Aliens. I was expecting to learn some surprising new facet of the production of Aliens. Whether it was something as simple as who was performing in a specific scene, or learning more about a conflict that I hadn’t realised was such a prominent part of the production. 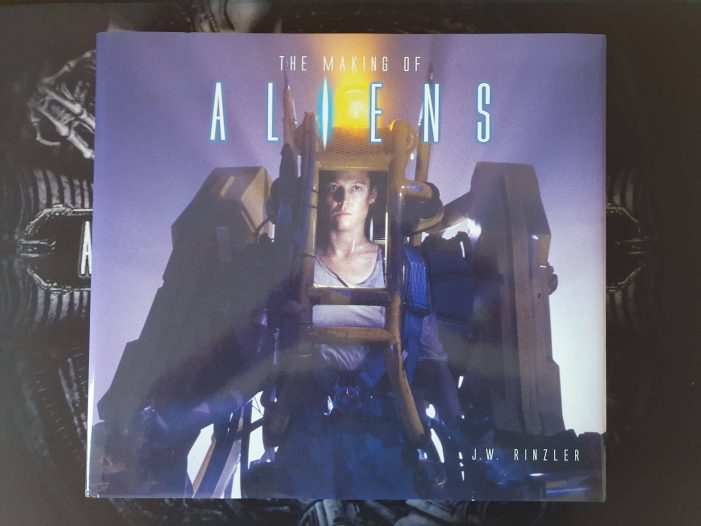 But regardless of my expectation to be surprised, Rinzler really didn’t take long to do it and blew me away within the early chapters of the book. Aliens is a film that I’ve always tended to think of having a very straight forward narrative development and that there weren’t as many interesting could-have-been anecdotes when compared to Alien or Alien 3. And then Rinzler throws out far more details about producers Walter Hill and David Giler’ storynotes than we’ve ever seen before.

And then immediately after, he goes and just drops another bombshell on me with details and excerpts from Cameron’s “first” draft. I think the story of how Cameron hadn’t finished writing Aliens by the time he had to start filming The Terminator, and that Fox were so impressed with what Cameron had written so far that they were willing to wait for him to finish The Terminator, is a reasonably well known one.

What completely dropped my jaw to the floor was that that “first draft” isn’t the complete “first draft” that is available online. Cameron’s threw away his first 90 pages when he came back to Aliens, and started completely anew and that is the complete draft that is available online. Those pages that impressed 20 Century Fox were actually were surprisingly different from the finished first draft!

That partial draft more closely followed Cameron’s original treatment and deviated the most from what we would eventually see on screen. Though closer to Cameron’s treatment, there’s still some interesting differences in here such as the synthetic replica of Jones because the cat didn’t survive the extended hypersleep.

Honestly, I was so damn surprised at the Hill and Giler notes, and this partial draft, that the rest of the book could have gone without further revelations and I’d have been perfectly content. I always thought that Aliens’ script development was so straight forward and once again, Rinzler proved that even though we think we know the development of these films, there’s still surprises to be had when you let him loose on the archives! 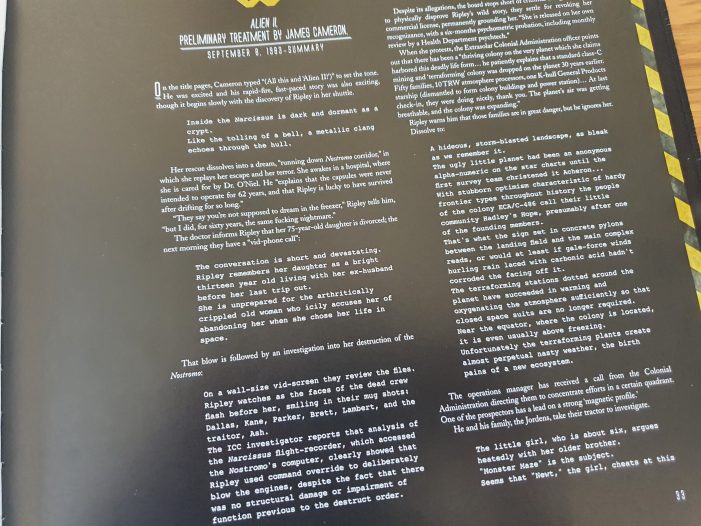 In what seems to be Rinzler’s style, like The Making of Alien, The Making of Aliens takes us through the chronological order of the films production as shot, including some important pre-Aliens profiles on some of the cast and crew. There’s some nice details on the journey that led to Cameron and Gale Ann Hurd’s involvement with Aliens, spending a nice amount of time with them at Roger Corman’s company. I really do appreciate those sections, letting us know more about them outside of Aliens’ production.

I really do love this format of Making Of. Rather than taking us through the narrative order of the film, actually following the chronology of the production makes it feel much more involved with the actual production.

Another element of Aliens’ production that the book really shines a light on was the extent ofthe cultural clash between the Americans and the British. The stories usually talk about James Cameron, with the infamous tea trolley lady. However, The Making of Aliens revealed that the clash extended out even further, becoming a conflict with the effects department too that lasted quite some time.

Though I haven’t seen him talk about, I assume that Rinzler went into the book without too much prior knowledge of the behind-the-scenes story of Aliens as he did with Alien. While I still appreciate that this means he’s going in without preconceived notions, it also means he isn’t able to challenge urban myths regarding the production. I was disappointed by that in Alien, and I was disappointed by it here too. I would have really liked to have seen him talk about the “illegal Alien” line. And I was disappointed to see the “Alien$” story warrant a mention, even if he did describe it as apocryphal. I would have liked to have seen it more directly challenged.

One of the things I really enjoyed about The Making of Alien was knowing which performers were inside the Alien suits during specific scenes, which was something that was missing from this book. I feel like this one may have simply been down to the documents and call-sheets that Rinzler had access to, but I thought it warranted a mention as it was something I’d been particularly enthusiastic about in the previous book. 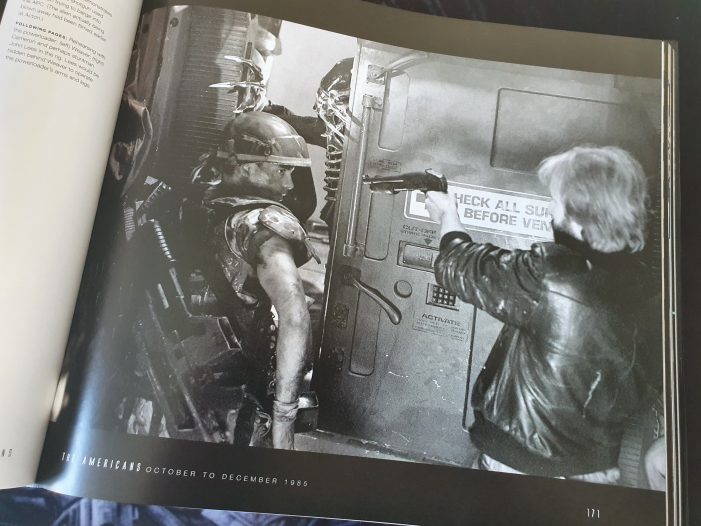 I was especially pleased to see a good number of images I wasn’t familiar with, such as the still of James Cameron above, some of the storyboards throughout the book and a lot of model photography. At the risk of repeating myself, it’s also surprising and pleasing to see new things like this continuing to crop up!

There were some odd printing issues where sometimes letters would run into each other during some sections that were transcribing the actual screenplays, but I didn’t notice it in the bulk of the actual book itself.

And while still a little shorter in page length than Alien, The Making of Aliens is still a big book and took me a fair length of time to actually finish, but it was one I was always sitting down to open that massive book across my lap and diving in. 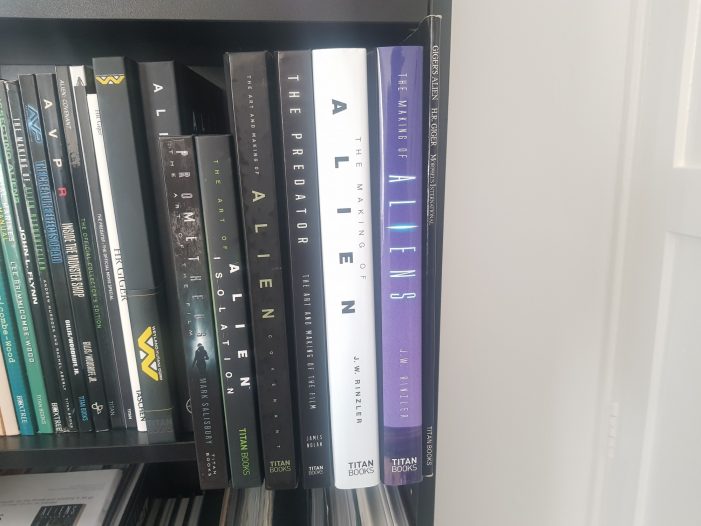 It’s absolutely criminal that it sounds like we wont have the pleasure of seeing a Making of Alien 3 from Titan and Rinzler. Of all the films in the Alien series, one on Alien 3 would have to be the most fascinating! Hell, I’ve love to see Rinzler continue to cover all the Alien films. Prometheus and Alien: Covenant are likely to be gold-mines. I’d even want to see him take on Alien: Resurrection just to see if he could dig up that Newt clone treatment! That’d be worth the cover price alone. I really hope 20th Century Studios/Disney reconsider this decision.

The Making of Aliens is another home run for J.W Rinzler, and a must-buy for any Alien fans interested in the production of these films! There’s no other way to put it. It’s yet more proof that there’s still more to learn about these films, and they can be done in hugely entertaining ways. Do yourself another favour and pick up Rinzler’s The Making of Aliens!