Deceased Kindred
Ripley is sitting on a park bench waiting for Burke (before the inquisition), immediately following her stay in Gateway Station’ hospital. She presses a button, and the entire park behind her disappears, reveiling a grey screen. Burke enters and tells her how to act at the hearing. Ripley asks about her daughter. Burke keeps talking about the hearing. She insists to hear about her daughter. Burke hands her a computer printout (colour) that shows her a nice old lady. Burke tells her her daughter died at the age of 67. That was two years ago. Ripley whispers that she promised her daughter she’d be back before her 11th birthday before going off on the Nostromo. 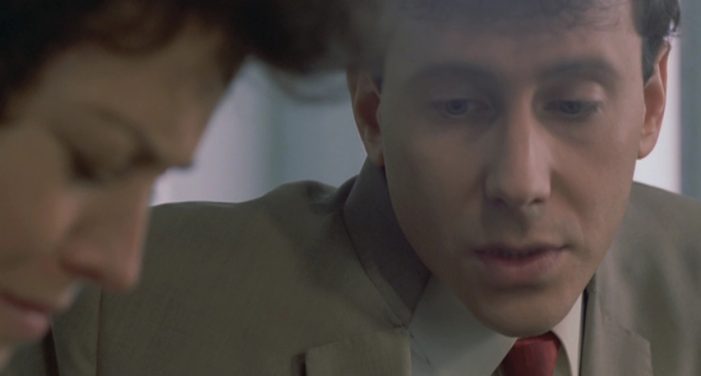 Court’s Decision
After Ripley’s outburst during in the inquest (“Because if one of those creatures gets down here, you can kiss all of this goodbye”), dialogue has been restored in which Van Leuwen voices the council’s final decision. (her flight status is revoked because she is deemed unfit to serve as a flight officer, she has to have monthly psych evaluations, and no criminal charges being filed against her). 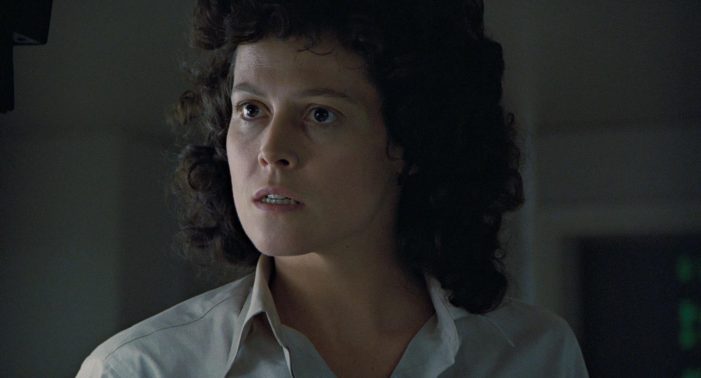 Hadley’s Hope
A scene where the colonists receive orders from Burke telling them to explore the derelict space craft. Newt’s family drives to the site, during the trip Newt and her brother Timothy are arguing about a game of hide and seek that they play in the colony’s airduct system. Timothy complains that Newt has the unfair advantage of being able to hide in the small places that the rest of the players can’t get to. Following this, they arrive at the derelict ship and the mother and father go in; later the mother returns dragging the father who now has a face hugger clamped on his face. 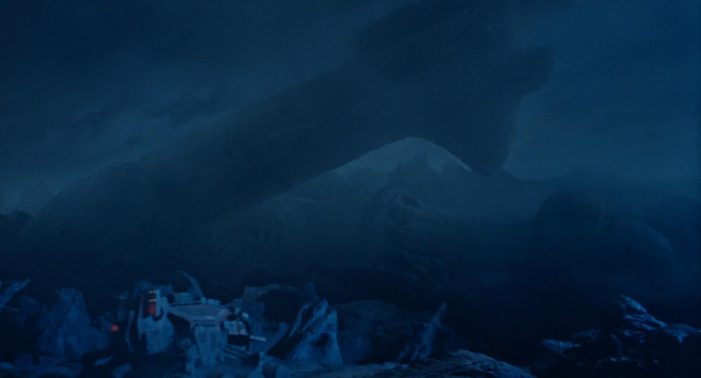 Company’s Interest
Ripley asks Burke why he is going when they try to convince her to go with them to LV-426. He replies, “The corporation co-financed that colony with the Colonial Administration. We’re getting into a lot of terraforming now… Building Better Worlds.” Ripley says, “Yeah, yeah. I’ve seen that commercial.” 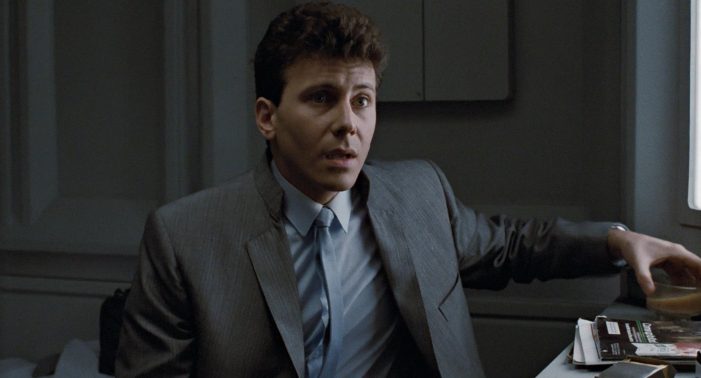 Sulaco’s Introduction
Immediately following the establishing shot of the Sulaco flying towards LV-426, is an introduction sequence to the interior of the ship. There is a row of lockers and one of them swings open revealing a poster. Next to them are rows of weapons and then outside of that area is the docking bay. The docking bay leads to the mess hall and lastly the frost-covered cryotubes. This sequence is similar to the introduction of the Nostromo in Alien. 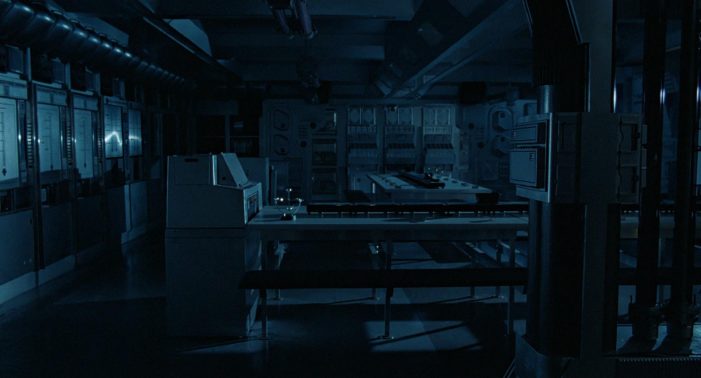 Ultimate Badass
Hudson stands up during the drop from the Sulaco to LV-426 and boasts. He says, “I’m ready, man. Check-it-out. I’m the ultimate badass…. state of the badass art. You do not want to fuck with me. Check it out.” Hudson then crouches next to Ripley and continues, “Hey Ripley, don’t worry me and my squad of ultimate badasses will protect you. Check it out… independently targeting particle-beam phalanx. Vwap! Fry half a city with this puppy. We got tactical smart-missiles, phased-plasma pulse-rifles, RPG’s. We got sonic electronic ballbreakers, nukes, knives….. sharp sticks.” Apone tells him to knock it off. 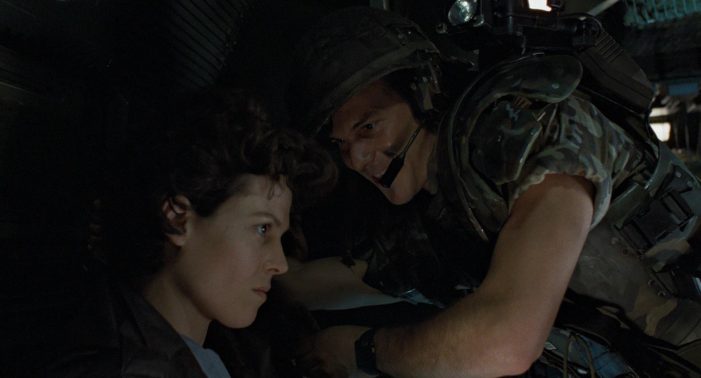 Initial Colony Check
Hudson and Vasquez pair up when Gorman orders his platoon to search the colony in twos. Movement is detected on Hudson’s Motion Scanner so he and Vasquez proceed to investigate. Gorman and the other people inside the A.P.C. watch tensely. Hudson and Vasquez enter a small room where in an adjacent room lies the source of the signal. Hudson kicks open the door and they move in quickly only to discover hamsters stirring in their cage. 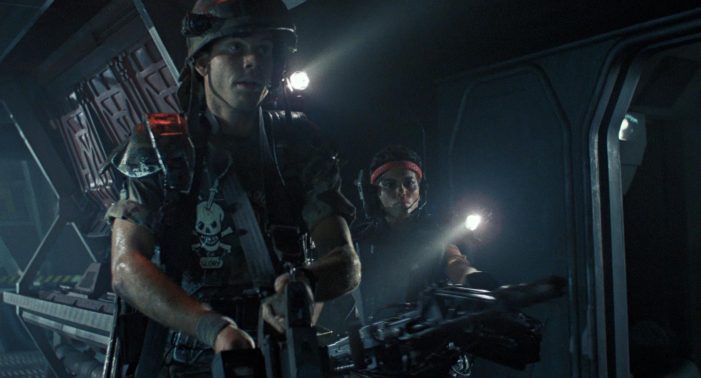 Entering the Colony
The A.P.C. drives around the colony complex to the South Lock where Ripley, Gorman, Burke, and Bishop get out to enter. Frost and Hicks are there to escort them safely inside but Ripley stops before entering the complex. She stares at the structure and Hicks asks her if she is alright. Ripley says she is and they enter with the doors closing behind them. 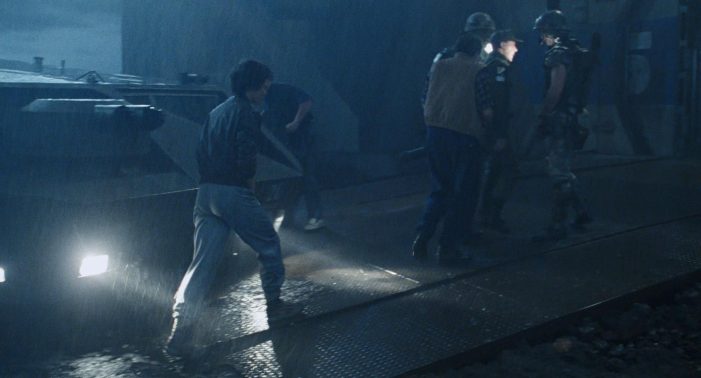 Sentry Guns Salvaged
Hicks reports that four robot sentries were recovered from the Dropship’s wreckage. This is good news since they work great and will be very useful. 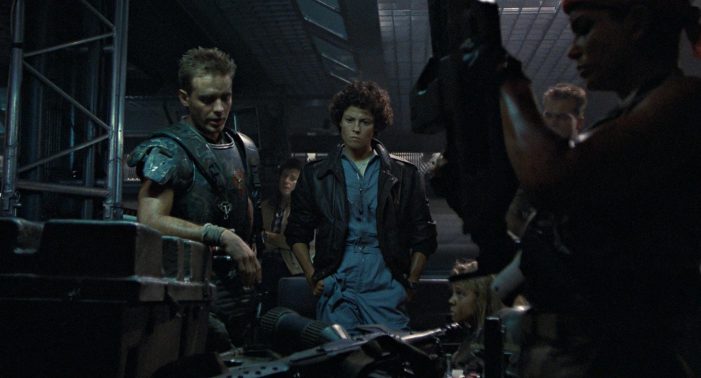 Defense Placement
Hicks and Ripley decide where to place the four remote Sentry Guns while they examine the colony’s blue-prints. They decide to put two in a service tunnel and two in a nearby corridor. 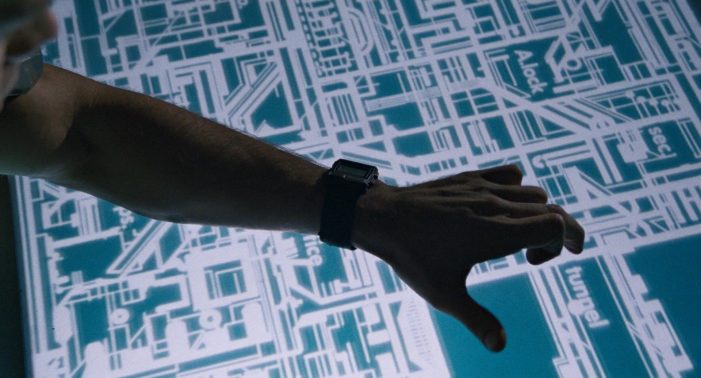 Testing
Vasquez and Hudson set up the A and B Sentry Guns in the service tunnel. Hicks arms the units and Vasquez throws a can in front of them. The can is immediately shot to pieces. The video clip with this footage is the same as the clip above so be careful not to download it twice. 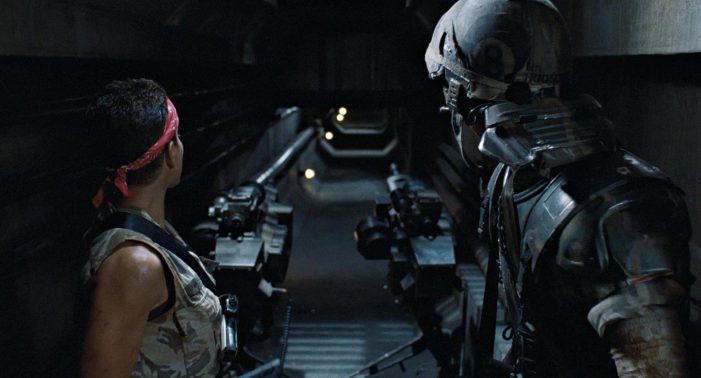 Scanning
Before Ripley carries Newt into the infirmary, the C and D Sentry Guns are shown briefly scanning the colony corridors. 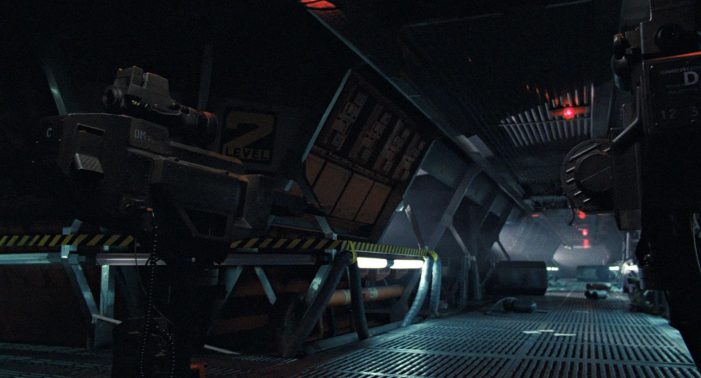 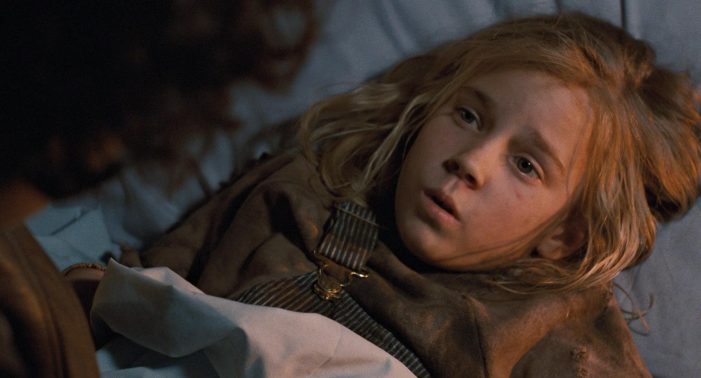 Queen Speculation
At the end of the life cycle discussion, Hudson further speculates it may be like an ant hive. Vasquez corrects him saying, “Bees man. Bees have hives.” Hudson replies, “You know what I mean. There is like one female that runs the whole show.” Bishops then adds, “Yes, the queen.” Hudson continues, “Yeah the momma. She is badass man, I mean big.” Vasquez tells him these things ain’t ants and he replies, “I know that.” 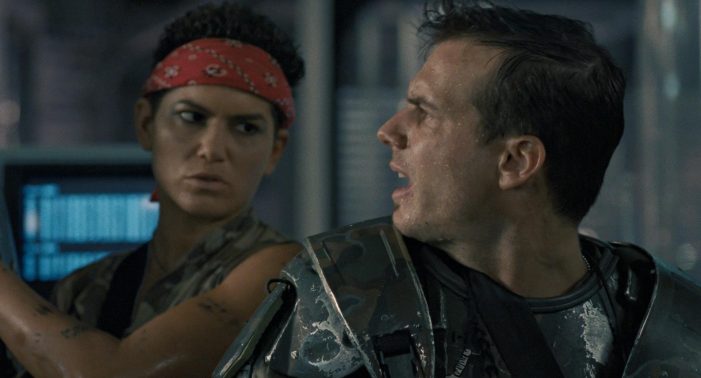 Tunnel Battle
After Ripley’s confrontation with Burke, she walks into a corridor near operations and an alarm goes off. Ripley opens a door and runs into operations where Hicks is seated. Hudson and Vasquez are with them and Hicks tells them they’re tracking Aliens in the tunnel. A and B Sentry Guns begin firing but they quickly run out of ammunition. Sounds of the Aliens ramming the pressure door can be heard. 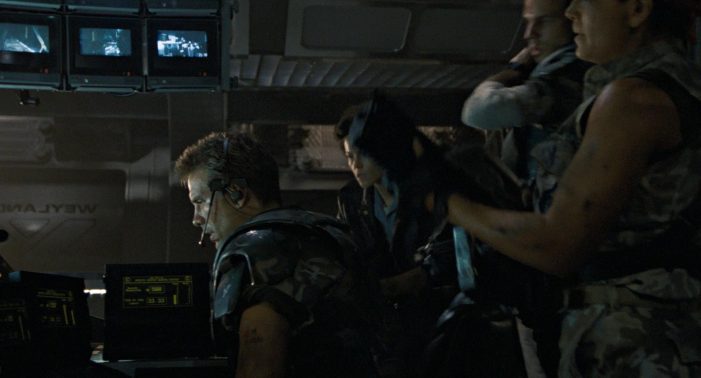 Corridor Battle
After Vasquez and Ripley seal Bishop in the pipe, the Aliens confront the C and D Sentry Guns in the corridor. D gun’s ammunition runs out and Hicks grabs his Pulse Rifle turning to leave operations. Ripley stops him when the corridor grows silent with 10 rounds left in C. The guns stopped the Aliens. Ripley decides they must be looking for another way in. At the end of the scene, when Hicks dispatches Hudson and Vasquez to walk perimeter, some of the shots have been rearranged from the theatrical edition and Hicks’s dialogue slightly altered. 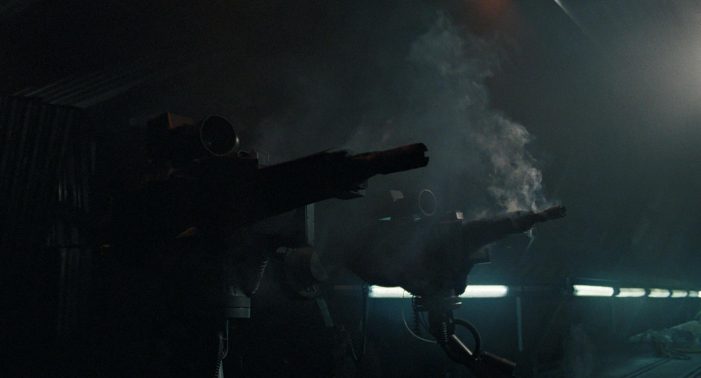 First Names Exchange
Before Ripley leaves the Dropship to rescue Newt, she turns to Hicks and says, “See you Hicks.” Hicks replies, “Dwayne. It’s Dwayne.” Ripley tells him her first name, Ellen. Hicks says, “Don’t be gone long Ellen.” This scene slowed the pace of the ending much like the cocoon scene of Alien. 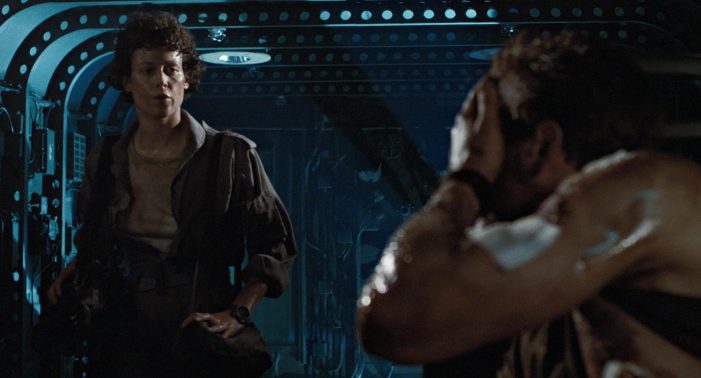