Whether you’re interested in the Colonial Marines or far flung colonies, Aliens is a film that really expanded the Alien universe with many world building elements, big and small. It offered a lot of tantalizing smaller pieces of lore such as the prospect of other non-acid blooded alien life out there in the outer-colonies. One such prospect was the Arcturians.

What exactly are the Arcturians? That is a question that has been cropping up on mail groups and message boards since the Internet became a place for fans to get together to discuss. Are the Arcturians an extra-terrestrial race or are they a gender-fluid colony of humans?

Before Privates Frost and Spunkmeyer ever said those memorable lines, Arcturus had actually been mentioned in previous Alien lore. Arcturus was named checked by Alan Dean Foster in the Alien novelization. While discussing how to capture the loose chestburster, Foster included the paragraph “tossing the sacked monster into the lock, sealing the hatch and blowing the emergency. Goodbye alien, off to Arcturus. Goodbye, nightmare. Hello, Earth and sanity.” 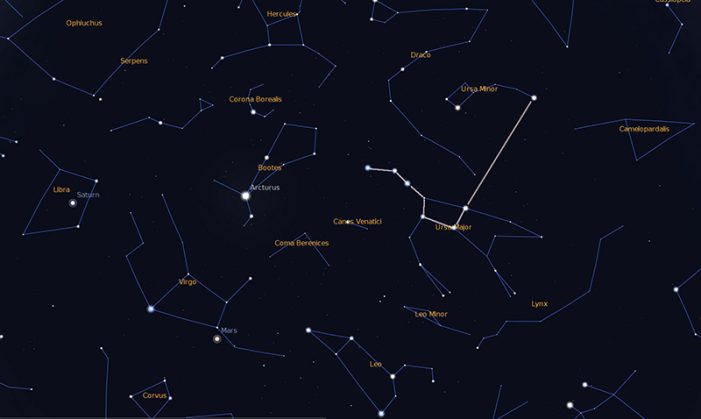 Due to it being a real star, Arcturus has also been referenced quite a few times in literature and films over the last century. But it also has further and older Alien connections as a shape-shifting extra-terrestrial known as an Arcturian was featured in a short comic written by Alien scribe Dan O’Bannon and illustrated by Alien concept artist Jean Giraud aka Moebius.

While the pair were attached to the aborted Jodorowsky Dune feature, they worked on The Long Tomorrow in 1975 as a way to kill some time. It was originally released in the French magazine Metal Hurlant in 76 and then in the American version, Heavy Metal, in 1977.

The Long Tomorrow would also go on to inspire other Alien connections in the form of Ridley Scott’s Blade Runner and is often credited as one of the first cyberpunk stories. The short comic followed Pete Club, a kind of Private Eye, who gets caught up in a situation that sees him get unknowingly intimate with an Arcturian spy.

In terms of further connections to Alien lore, what’s interesting about the representation of the Arcturian in The Long Tomorrow is that it was a shapeshifter. After all…it doesn’t matter if it’s male or female when it comes to Arcturian. 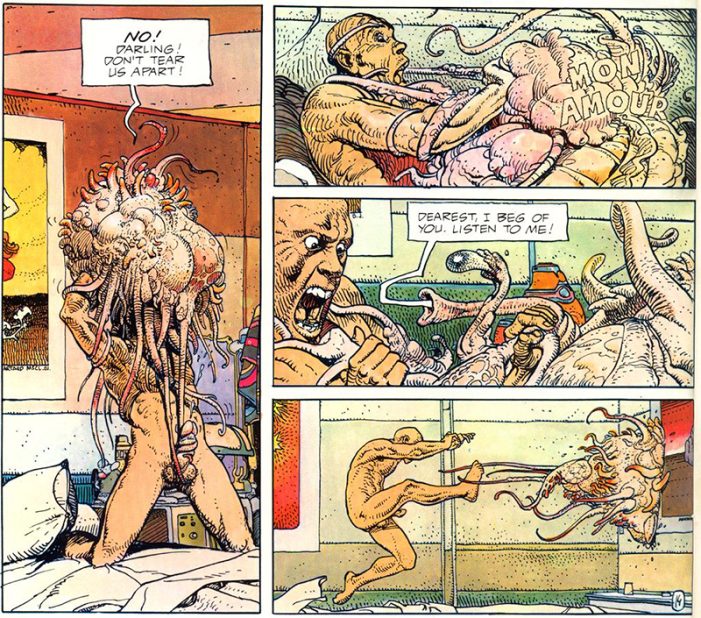 The Arcturian loses its humanoid form after being discovered.

Funnily enough, Frost and Spunkmeyer’s exchange about “it doesn’t matter when it’s Arcturian baby” wasn’t actually scripted, though. In both the first and final draft of Aliens, the line was simply “Hey, I wouldn’t mind getting me some more a that Arcturan poontang. Remember that time?”

It was originally a line for Wierzbowski, but like most of ‘Bowski’s lines it was given to Ricco Ross’ Frost to entice the actor to do Aliens instead of Full Metal Jacket. In an interview with Matt Gourley for his series I Was There Too, Ricco Ross revealed that “the one you had was a male” exchange was actually ad libbed.

So it’s very unlikely that it was a deliberate call-back to The Long Tomorrow. It was also spelt in the script as Arcturan, not Arcturian.

In the same interview, Ricco Ross also noted that the Arcturians were very much intended to be an extra-terrestrial species, not humans native to another colony.

While Cameron himself hasn’t actually commented on any of this, it seems quite likely that the Arcturian poontang line was a reference to the Vietnam War. Much of the military depiction in Aliens was taken from Vietnam and the Arcturian line may have been supposed to have evoked the way in which the US soldiers interacted with Vietnamese sex workers during the war. 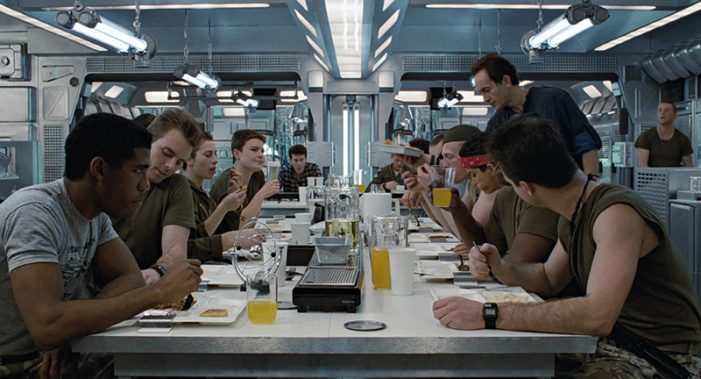 Frost’s line about the gender of an Arcturian not mattering may also be a nod (conscious or not) to trans-sexual sex workers in Thailand – so-called ‘ladyboys’ – where many troops went for R & R.

Despite the curiosity around the Arcturians, they’ve been noticeably absent from the Expanded Universe with only a handful of appearances. Their most significant inclusion was in the Aliens Adventure Game, a Role Playing Game published by Leading Edge in 1991. The following is what the Adventure Game had to say on the Arcturians.

“These are the natives of Arcturus, and they are mammal-like creatures that are about the same size as Humans. Their society is like that of ants; they live in underground hives, have a single large Queen which lays eggs, and raise their young in communal nursing chambers. They are semi-intelligent, with mental abilities similar to those of the lower apes.

This combination of animal and insect traits makes the Arcturians a strange race. They are warm-blooded omnivores, breathe an oxygen atmosphere, and are roughly humanoid but they are also eyeless and they communicate and find their way using sonar.

Their young are amphibious and raised in warm pools in nursing chambers near the bottom of the hive. The limited intelligence of the Arcturians allows them to work together on important tasks, learn from experience and teach each other. They have a rudimentary language and use simple tools, including sharpening pieces of stone for weapons. 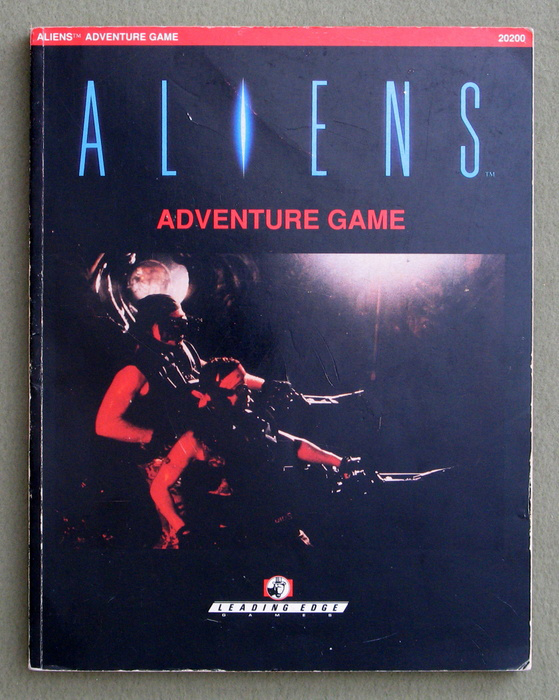 Arcturians pose little threat to armed Colonial Marines, but an unwary group entering Arcturian tunnels could be in trouble. They have been known to lay traps for Humans, and have even collapsed shafts to isolate intruders. The Arcturians have also leaned to wait until a group’s lights have failed before attacking, to maximize their advantages.

Arcturians are kept away from Human settlements by sonic barriers. To drive them out of their warrens is more difficult, as the Queen is immobile and the Arcturians will defend their nursing chambers to the death.”

The Adventure Game would also go into some detail regarding the Arcturian homeworld, Arcturus. The planet was habitable with a functioning biosphere, though it was considered a cold, harsh world. The majority of the native population lived in communities of a few dozen in complex subterranean warrens, while human colonists had made a presence on the surface.

The Arcturians wouldn’t be mentioned again in the Expanded Universe until the soft reboot in 2014 when the second Titan novel, Alien: Sea of Sorrows, referenced them for the first time in over a decade.

Though they still haven’t actually appeared in any of the novels yet, they were mentioned again in Alien: River of Pain and Alien: Invasion. The novels paint a much different picture of the Arcturian, where they are implied as being intelligent and played a significant role in mankind’s ventures into space. 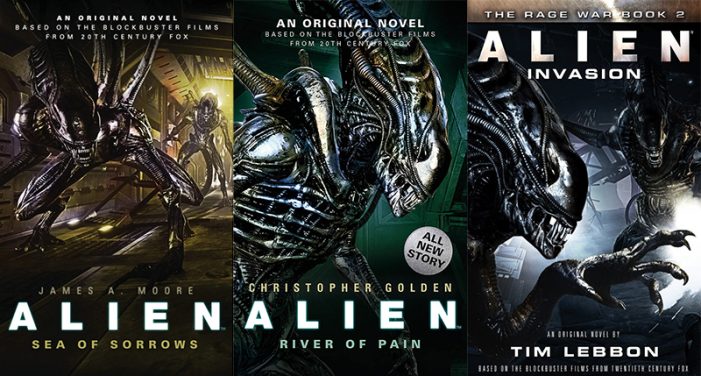 They were described as the first alien race that mankind had encountered and that first contact was considered a turning point for mankind. Weyland-Yutani, in particular, had gained much from mankind’s contact with the Arcturians. Following first contact, trade agreements were established with the Arcturians and it allowed commercial companies like Weyland-Yutani to make significant strides in research and development of new technologies.

Sometime in the 27th century, a group of humans settled on Arcturus and eventually renounced their humanity entirely.

The Arcturians are also responsible for a particular disease that is able to cross the species barrier and infect humans. Known only as the Arcturian Klerhaige, it was repeatedly cured and wiped out but continued to reappear again on other worlds.

Arcturus has been referenced in other more subtle parts of the Expanded universe too. It is featured in Alien: Isolation as a destination from Sevastopol’s spaceflight terminal alongside other real-world star systems such as Bernard’s Star and Alpha Ceti.

In Superman and Batman vs. Aliens and Predator, Batman explains that the Predators homeworld was “someplace in the neighbourhood of Arcturus.”

And that is it as as far as the Arcturians are concerned. Perhaps later entries in the expanded universe will delve into them a little more but until then, this is everything we know about the enigmatic race!