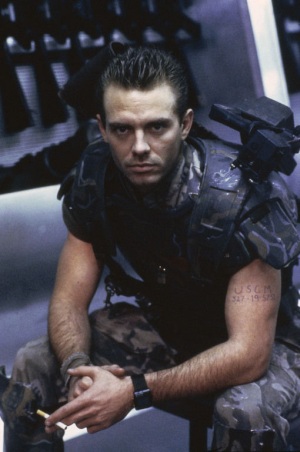 Corporal Dwayne Hicks was a member of the Colonial Marines and was part of the team that was sent to LV-426 in 2179 to investigate the Hadley’s Hope colony. Hicks was Second Squad’s leader and operated the motion tracker, and was the only marine to survive Lv-426 along with Ripley and Newt.

He is subsequently killed when the E.E.V. ejects Ripley, Hicks and Newt from the Sulaco and crashes onto a planet called Fury 161. Corporal Hicks is played by Michael Biehn and appears in 1986’s Aliens and lends his likeness to 1993’s Alien 3. He also lends his voice and likeness in the 2012 video game Aliens Colonial Marines. Michael Biehn is also also rumoured to reprise his role as Corporal Hicks in Neill Blomkamp’s untitled Alien sequel.

Corporal Hicks and his unit were sent to LV-426 in 2179, along with Ellen Ripley and Weyland-Yutani representative Carter Burke, to find out what happened to the Hadley’s Hope colony. Hicks was initially sceptical of the mission and thought it was a waste of time, and that the colony was simply having communication issues. They drop from the Sulaco onto LV-426 via a dropship and then travel via APC to the compound.

Hicks and the marines explore the colony and secure it. They find no trace of the colonists and whatever was there, was long gone. The rest of the group enter the compound and discover two live Facehuggers held in stasis tubes in the med-lab. Hicks discovers a little girl on the motion tracker who then bites his hand when he tries to grab her.  The group soon discovers that all the colonists are being held underneath the colony’s Atmosphere Processor and set out to investigate it.

Ripley, Burke and Gorman remain in the APC while the marines explore and find the area covered in strange resin. Gorman orders the marines to surrender their Pulse Rifle ammunition and grenades as to not rupture the Atmosphere Processor’s reactor. Hicks hands over his ammunition and resorts to using his shotgun instead. 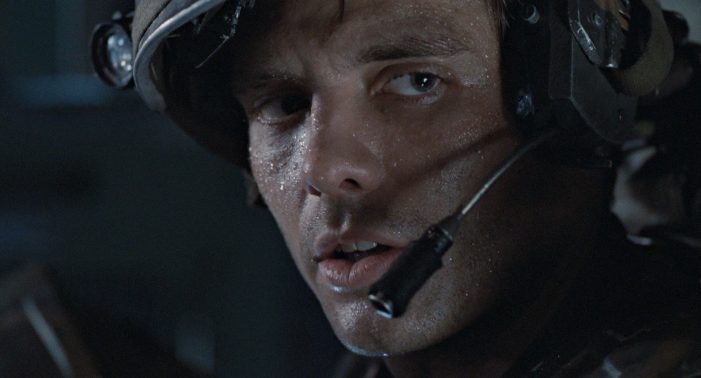 The marines find the colonists cocooned to the wall and Hicks notices the empty Eggs and dead Facehuggers nearby. They find one of the victims still alive on the wall and a Chestburster bursts out her. Apone and Dietrich incinerate it which wakes up the xenomorphs hibernating in the walls. The xenomorphs attack the marines, Hicks rescues Wierzbowski only for him to be attacked a few seconds later. With many of the marines dead, Hicks orders the remaining marines to fall back.

Hicks manages to kill a few xenomorphs with his shotgun on his way back to the APC. He was the last marine in the APC when an alien prevents him from closing the door. He puts his shotgun in its mouth and pulls the trigger, killing it and spraying acid everywhere. Gorman gets knocked out by some falling boxes and Hicks becomes the ranking commander of the team. Ripley and Hicks agree to leave LV-426 in the dropship and nuke the site from orbit. They call the dropship which then crashes into their APC narrowly missing Hicks and the remaining survivors. 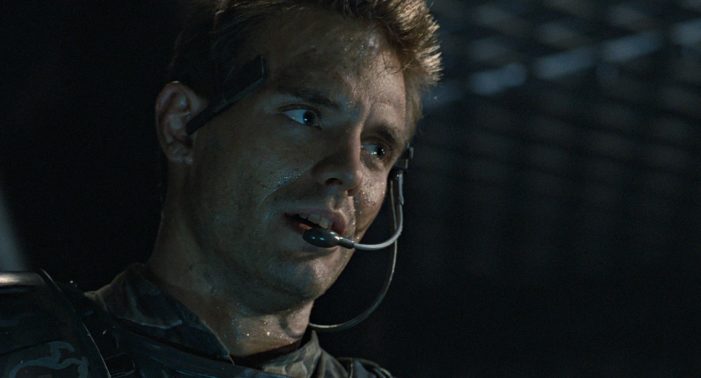 They salvage what they can from the APC and go back to the compound. They barricade themselves in there and place four Sentry Guns is strategic locations to prevent the xenomorphs from coming in. Bishop tells the group that the Atmosphere Processor is going to explode in a matter of hours. Hicks comes up with a plan to remote pilot the other dropship on the Sulaco to pick them up. Bishop bravely volunteers to go to the colony’s transmitter outside to pilot the dropship. In the mean time,

Hicks gives Ripley a tracking device so they could find her if she gets lost and shows her how to use a M41A Pulse Rifle. The xenomorphs manage to get past the first set of sentry guns but fall back at the other two with almost all of Sentry Guns’ ammunition empty. Later, Hicks and the team are alerted to a fire alarm in the med-lab and find Ripley and Newt locked inside with two Facehuggers.

Hicks breaks the window and dives through it rescuing Ripley and Newt. As they realise Burke was responsible, they interrogate him and find out that he was planning to smuggle xenomorphs through customs on the way back to Earth and sabotage the marine’s stasis chambers when they were in hypersleep. Hicks is about to kill Burke when the xenomorph cut the colony’s power. 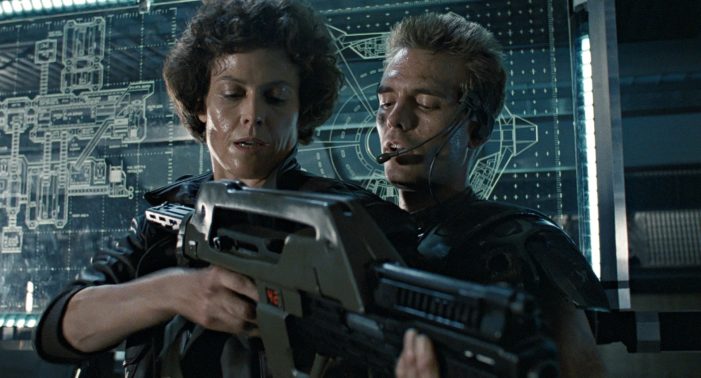 The group barricade themselves in but the aliens come through the ceiling. Burke and Hudson are grabbed by aliens and the other escape through the vents with Newt in lead. Gorman and Vasquez sacrifice themselves with a grenade which causes Newt to fall into some water. Hicks and Ripley couldn’t reach her in time and a xenomorph grabs her. The two of them are forced to run to an elevator to escape from more aliens.

Hicks uses his Pulse Rifle which spray acid everything burning his face and melting through his body armour. Ripley helps an injured Hicks to the dropship where Bishop sedates him. As Ripley prepares to go find Newt, Hicks tells her his first name – Dwayne. Hicks remains unconscious and after the group reach the Sulaco, Ripley places him hypersleep.

Soon after Ripley, Newt, and Hicks enter hypersleep, it’s revealed the Queen Alien placed an Alien Egg on the Sulaco where a Super Facehugger emerges, and infects Ripley. This causes the Sulaco to eject the stasis tubes into an E.E.V. where it crashes into a prison planet called Fury 161. Ripley survives the crash but Newt drowns in her stasis tube and Hicks is killed when a support beam impales him. The bodies of Hicks and Newt were cremated in the lead works.

Michael Biehn was strongly rumoured to be reprising his role as Corporal Hicks in Neill Blomkamp’s Alien sequel. Neill Blomkamp posted some concept art in early 2015 showing Corporal Hicks very much alive with his left side of his face burnt from xenomorph acid. Neill Blomkamp has stated that he intends to ignore the events in Alien 3 and Alien Resurrection and create his own sequel to Aliens. Therefore Corporal Hicks’ death at the start of Alien 3 never happened. 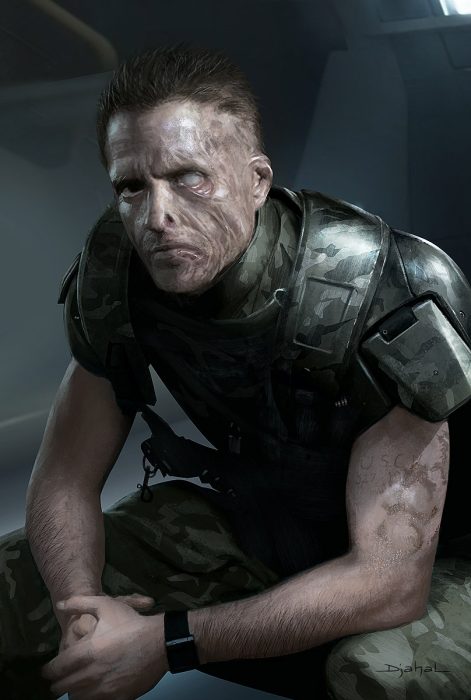 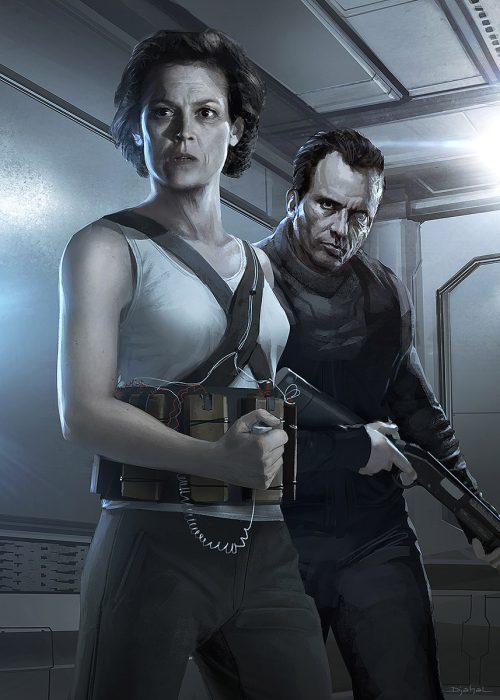 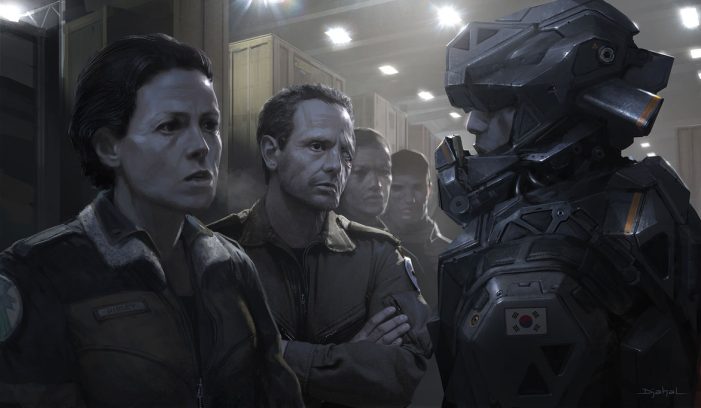 Michael Biehn lends his voice and likeness to the 2013 game Aliens Colonial Marines. The game features an alternative timeline where Hicks actually survives after the events in Aliens. After Ripley and Hicks enter hypersleep, Hicks is woken up by colonists Samwell Stone and Turk needed military help. The ship had been intercepted by the USS Legato and had been boarded by Weyland-Yutani operatives.

Hicks tries sending a distress call to the Colonial Marines informing them that the mission was a failure and that all of his team are dead. Hicks and Samwell Stone battles their way through the Sulaco killing most of the operatives and xenomorphs on the ship, and took the shuttle to Fury 161. They got there in time to see Ripley kill herself and the Chestburster inside of her.

Hicks and Stone were taken to Resolute – a Weyland-Yutani ship, currently located at their Origin facility which is built around the Derelict spacecraft on LV-426. Hicks and Stone were interrogated and Stone was killed when he refused to talk. Hicks was freed by a researcher called Richard Levy. The base is overrun by xenomorphs and the two of them reach a communication uplink so they can send Hicks’ distress call.

Before the message can be fully transmitted, Michael Weyland destroys the uplink and Hicks was recaptured.  The uplink, however, was successful and the USCM received the information about the mission on Hadley’s Hope and were on their way to investigate. The Colonial Marines arrived in the USS Sephora spaceship and rescued Hicks from the facility. He helped defend their rendezvous point in the remains of Hadley’s Hope and then they attacked the Origin facility so they could use the starship to escape LV-426. On board the starship, Hicks and some other marines confront Michael Weyland. Hicks executes him but it was revealed that this Weyland was an android and the real Michael Weyland escaped. Hicks survives the events but after this, his fate is unknown.

At the start of his mission to Hadley’s Hope, he was fairly quiet. Once Gorman was incapacitated, Hicks stepped into the leadership role. He kept a level head when other members of his squad were falling apart as the problems kept mounting. There was a romantic interest between Hicks and Ripley which increases as they finally leave LV-426. Hicks is also the only marine who tried to befriend Newt and made her feel part of the team when other marines treated her like a child.

Hicks was carrying the M41A Pulse Rifle and his backup weapon was a Ithaca Model 37 shotgun which he put to good use under the Atmosphere Processor. He had an M314 Motion Tracker which enabled him to detect movement in front of him, and an ME3 Hand Welder for sealing off vents and doors. Hicks had marine standard armour, helmet, shoulder lamp and body camera. 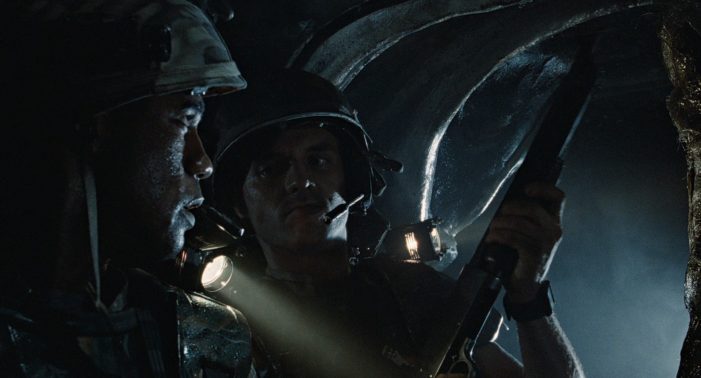