“After a horrific accident strikes a space station, an engineering officer must use all available tools–a timer, utility kit, and his wits–to survive an attack from the deadliest creature known to man.”

Continuing their run of recent Alien comics, Dark Horse Comics released the first issue of Aliens: Dead Orbit towards the end of Aliens: Defiance’s run. Defiance was an ambitious 12 issue long series that started off really strong but started to fall-down in the last half of the series. Aliens: Dead Orbit is a four part series written and illustrated by James Stokoe that brings us back to a simpler but immensely effective series.

The first issue was released on Aliens Day, April 26th 2017, with the final issue (after several delays) being released on the 13th of December. From the very first issue, it was quite clear to see we were in store for something really great with Aliens: Dead Orbit. Each issue continued to be impressive, so much so that as I turned the final pages on that fourth issue I thought that the delays in getting it were completely worth it.

Aliens: Dead Orbit opens with the lonely engineer Wascylewski waiting for his countdown to slowly tick down and we follow as he dons a spacesuit and crosses the damaged exterior space station Sphacteria. Throughout the series we jump from the lonesome Wassy in the present into the past to find out what had happened aboard the Sphacteria.

Surprisingly it had something to do with Aliens! The moving between between time-frames is largely coherent, using visual cues as jumping points to shift the narrative. It does become a little harder to follow during the fourth issue but after a double-take or two, it’s easy to pick up on the different style that Stokoes is using to convey similar action taking place in both time-frames. 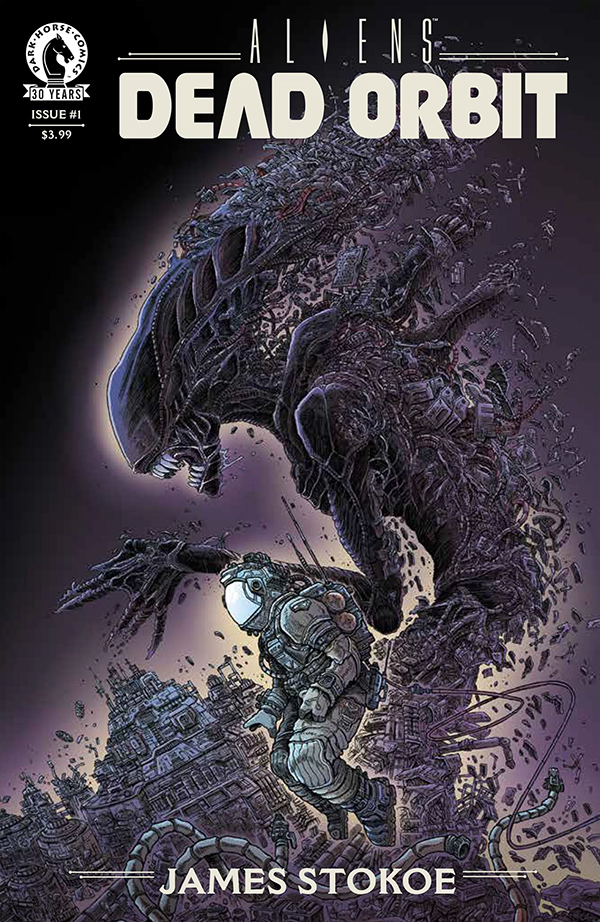 A seemingly lifeless starship arrives near Sphacteria, returning to the nearest Company owned facility on autopilot. The station crew investigate, board the derelict and find three cryotubes with some infected cargo.

Cue some bursting and deadly Aliens running amok and the surviving crew of the Sphacteria having to figure out a way to survive until help arrives. Aliens: Dead Orbit’s story is fairly straight forward, with the Aliens picking off the characters and the characters moving from one plan to another in a very Alien-esque way. It’s not just a retelling of Alien, though. There’s some fantastic unique moments that helps Dead Orbit stand out, both in terms of narrative as well as visuals.

The series had several sequences throughout that just impressed me so much. I don’t want to turn this review into a list of awesome moments from Aliens: Dead Orbit but I just have to point out specifics that I really enjoyed.

There’s a section early on where several characters are horrifically disfigured by leaking cryo-coolant. There is also a chestbursting sequence that is absolutely brutal and tail-ended by a really interesting moment between the newborn Aliens.

Aliens: Dead Orbit also gave me something I wish we’d see a little more of in the expanded universe and that is characters being captured by the Aliens, rather than out-right slaughtered. It’s a side of the Aliens that I really love and a part of the series I find incredibly creepy! The thought of being kidnapped and hived up…

It’s one of the aspects of Aliens: Berserker/Frenzy, one of Dark Horse’s older series, that really stood out to me and is something that S.D Perry exploited to great effect in the novelization of the series.

Something that jumped out at me from the very first previews was how similar Aliens: Dead Orbit’s art looked to the artwork of Ron Cobb and Jean Giraud (aka Mœbius) which gives the series a very distinctive Alien-vibe right from the very first pages. In addition to that visual style feeling right at home within the Alien universe, it also gave Dead Orbit something of a unique visual style that makes it stand apart from many of the other Alien series.

Much like Tristan Jones, another stellar artist to recently grace the pages of Alien comics, Stokoe packs so much detail into his artwork that helps bring the world of the Sphacteria alive. Stokoe’s rendition of the Alien is also fantastic. There are some absolutely fantastic panels where Stokoe has the Alien emerging from shadows or gas that look immense. 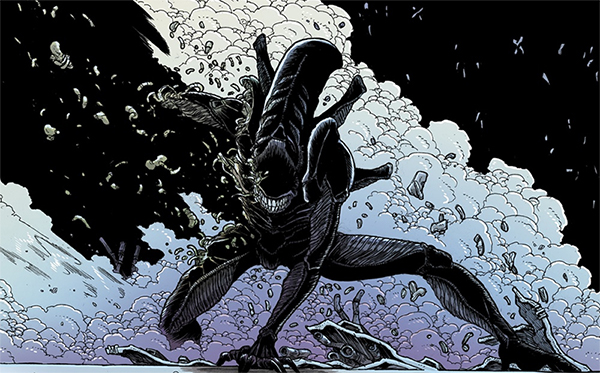 Stokoe’s style is just so atmospheric and moody, it really helps elevate Aliens: Dead Orbit to a whole other level. It’s so easy to just feel Alien and Alien: Isolation radiating off the pages, both in terms of the art style and in the story.

It’s one of the few entries in the expanded universe where it’s possible to feel the Alien’s presence even when it is not on the page. You can feel the character’s tension and fear throughout. This entire series is just dripping in atmosphere.

There’s even some Alien 3 in there. There’s a small reference early on about cholera wiping out some far flung colonies, the characters thinking some machinery is an Alien and that ending…that ending just screams of the macabre tone of Alien 3, and Alien: Covenant.

I don’t want to get into the specifics of the ending but it’s just so refreshing to see the harshness of the Alien universe used to such an extent. It’s a reminder that these encounters wont always end in a favorable way for the protagonists.

I haven’t really talked much about the characters in Alien: Dead Orbit. As much as I enjoyed the series, I don’t think any of the characters really shrone through. If it wasn’t for the main character, Wascylewski, the situation may not have even been as bad as it had to be. Arguably, he is responsible for the coolant leak which means the people the crew wake up from cryo aren’t in a position to explain the situation and keep them contained. But then we would have never got the series.

I wouldn’t say many of the characters are well developed but they’re all established quite clearly and we get to know their distinctive personalities. Stokoe also evokes some feelings for the characters through his immensely detailed style that clearly shows the emotions on his characters and helps bring them off the pages. 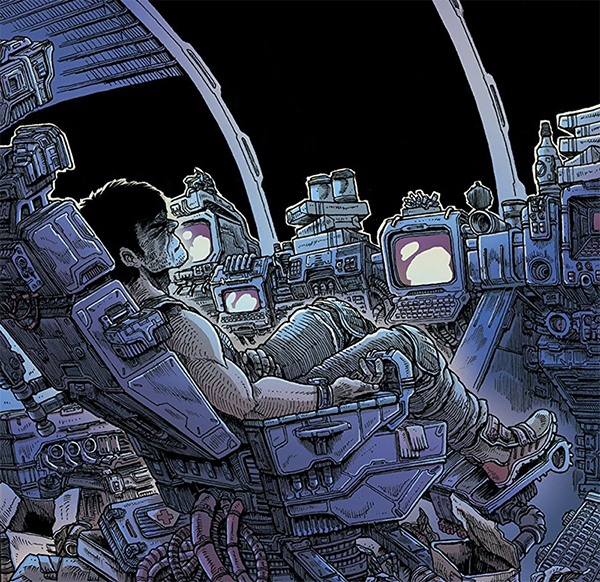 I really loved Aliens: Dead Orbit. The atmosphere and art style just really makes this series stand out as one of the best of the Alien expanded universe. I would recommend this to any Alien fan, whether they’re already invested in the expanded universe or if they’re looking to jump in.

I just hope that Dark Horse, or Marvel if that’s the way the post-Disney buy-out shapes up, remembers James Stokoe for future series. Stokoes just understands the Alien series. He’s one I would love to return! From Aaron Percival, here at Alien vs. Predator Galaxy, I award Aliens: Dead Orbit with 8 out of 10.