Spoilers are contained within this review.

“During a vicious xenomorph outbreak, terraforming engineer Derrick Russell leads a desperate group of survivors onto a rickety mining vessel. They hope to escape the creatures overrunning their colony—but they’ll face horrors both in space and on the strange planet they crash on. Ties in with the Prometheus and Aliens films!”

Whilst actually the second of Dark Horse’s Fire and Stone series to be released, Aliens is chronologically the first. Unlike the other three series, Aliens stands mostly alone and does not directly tie into the story of the other Fire and Stone comics. Like many of the recent releases for the Aliens series, Chris Roberson’s story includes some revisionist history and spins off from the events of the second film, Aliens.

Aliens – Fire and Stone follows a small group of survivors who escaped Hadley’s Hope via a short range ore transport ship that the colony used to transport ore mined from LV-426 to the surface for pick-up. I could completely buy into the idea of the colonists having a transport ship to transport materials into orbit but I did think the number of colonists who managed to escape was a little too high and probably would have been noticed during Aliens (“It looks like a God-damn town meeting”)

It actually serves very little purpose towards the story.  However, as far as the recent retcons go, I found it this be the most subtle and reasonable of all the recent revisions to the continuity of the Aliens series. 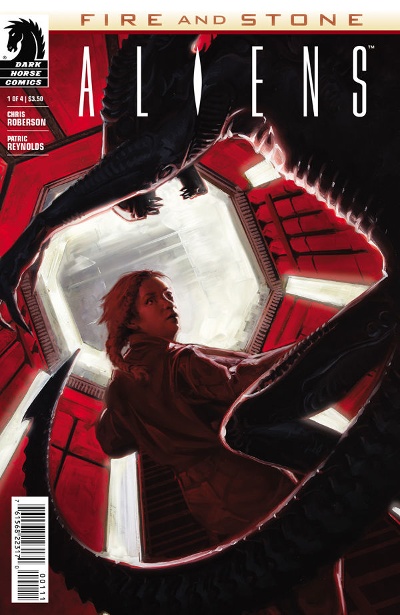 Cover art for Aliens – Fire and Stone #1 by David Palumbo.

The main character of the series is Derrick Russell, the leading terraforming engineer from Hadley’s Hope. Roberson did get a little messy here in that Aliens – Fire and Stone makes it sound like Russell took over from Al Simpson who featured in the Special Edition of Aliens. Considering the short frame of time in which the series takes place, it seems quite unreasonable that Derrick would have replaced Simpson.

Chris Golden would repair this discrepancy in his novel Aliens – River of Pain by making Al Simpson the man in the charge of the colony and having Russell in charge of the terraforming effort but the comment in Aliens – Fire and Stone still stands out.

Aliens – Fire and Stone is the first piece of Aliens literature we’ve seen released that embraces aspects of the Prometheus mythology – a theme that runs throughout the entire Fire and Stone series. First and foremost, after the escape from Hadley’s Hope the remainder of the series takes place on LV-233, the moon from Prometheus which orbits the same gas giant as LV-426.

They don’t find a desolate rock like they expected but a moon with a full ecosystem and breathable atmosphere. But why? That’s the question that plagues Russell throughout the run. And for the most part, Aliens wants to answer this. 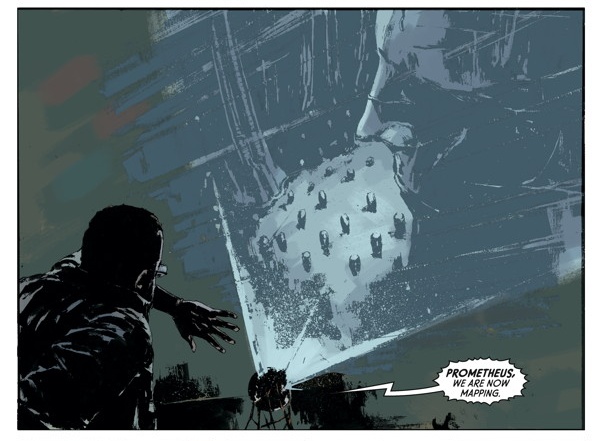 Derrick Russell discovers one of the Pups from Prometheus.

A concept from an earlier draft of Alien – Engineers (before Prometheus became Prometheus) had the crew of the Magellan (the Prometheus) coming to the moon to hunt for terraforming technology and Chris Roberson has Russell locate some form of terraforming device during his exploration. He theorizes that the array also releases biological matter and that the accelerant (black goo) reacted with it to create this teeming ecosystem.

One of the problems I have with Prometheus – and the entire Fire and Stone series, in fact – is that a lot of things happen but you never really get any real context or explanation. It just happens. And Aliens – Fire and Stone is no different in that regard. When I finished reading the series, I sat down to think about the series and about what I’d learnt. 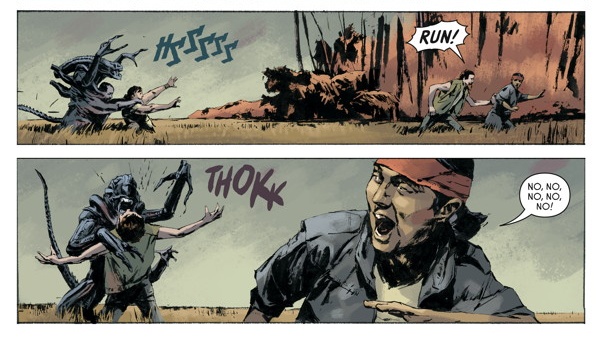 The result of what happens when a human comes into contact with an Alien and the Accelerant for a long period of time.

But it just doesn’t feel like much. I don’t know why. I get some small supposition from Russell who is doing this experiments without any advanced equipment but it wasn’t anything said with confidence.  It felt a lot like the team at Dark Horse wanted to play with the accelerant but they didn’t dare do too much or go too deep into it in case of anything that might show up in Prometheus 2.

That’s not to say there weren’t other avenues that could have been gone down. There’s an entire world of possibilities setup by Prometheus. Other potential Engineers created lifeforms – which does feature briefly in the Predator series and an even briefer appearance in the Prometheus series – could have opened a whole other realm of possibilities for the Expanded Universe to explore.

Aliens – Fire and Stone even has Russell exploring the Engineer facilities but aside from the mention of the terraforming engine to help setup what has happened to the moon, nothing comes of that exploration. There was potential for other technology to be found in the depths of their ships and facilities. The only cool toy that is picked up throughout the Fire and Blood series is a weapon (which is pretty damn awesome!) but I feel that they missed some better opportunities here.

The series focuses primarily on Derrick Russell, moving away from the rest of the surviving colonists as he begins to grow bored of their constantly repeating arguments in regards to their survival.  Not everyone agrees, especially on something as vital as their survival and for someone like Derrick, it would become tedious and boring and it’s the same for the reader. 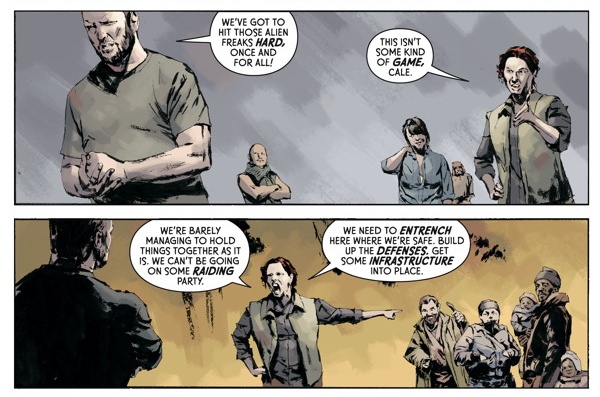 The survivors argue over their options. A frequent argument that occurs throughout Aliens – Fire and Stone.

Had Roberson involved me in that, I would have been bored as it made the arguing characters come across as quite unintelligent. They’d literally just escaped Hadley’s Hope where they had tried the options that kept being recycled and it hadn’t worked there.

None of the secondary characters really stand out as memorable aside from Cale who is ultimately responsible for bringing the Aliens to LV-223 and also becomes one of the mutations, a mutation that doesn’t seem to get on with the Aliens but this angle isn’t explored.

Roberson does let us explore the moon with Derrick – and whilst I don’t think the direction they went was the best they could have done, it’s Derrick’s descent into madness that makes him truly interesting to be around. He’s the star of the show as he starts to become more isolated from the other survivors and we begin to get a very Cast Away-type situation coming on where Derrick starts to talk to a Pup that he found left over from the Prometheus incident.

Unfortunately we don’t get to see any form of conclusion with Derrick’s journey throughout Aliens – Fire and Stone. He theorizes all these reasons for what is going on around him, he explores the Juggernaut ruins and finds the other installations but we get no answers to any of it. We don’t even get to see Derrick’s fate with Roberson leaving us on a very blunt cliff-hanger (another common element throughout the Fire and Stone series).

Roberson portrayed the Aliens as being very aggressive. They showed up and killed, and everyone ran off. Then the Aliens showed up again and killed some more people. The Aliens weren’t shown to take hostages for hosts – particularly irksome for the pages set on LV-426 where we know many of the colonists were kidnapped and taken to the Atmospheric Processor. Aside from their occasional appearances to kill survivors, the Aliens aren’t really utilized and don’t really feel like they serve a purpose for the actual story. 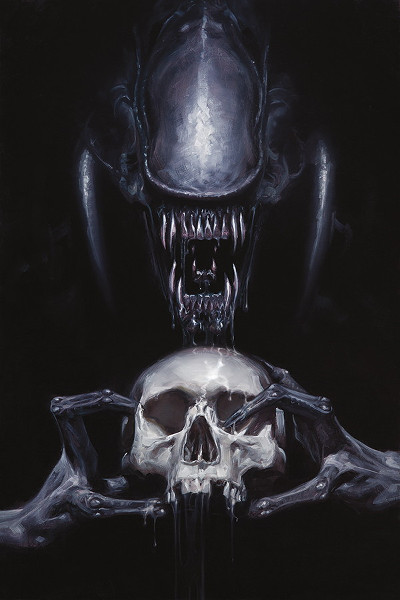 David Palumbo’s gorgeous artwork is featured on the covers for the series. There’s not a single cover for the series that I don’t love. It’s very atmospheric and rendered in fantastic detail and I would love to see him return for other series or another Alien productions (he would be perfect for Upper Deck’s Legendary Encounters!).

Patric Reynolds is the man responsible for the interior artwork. His style is far better than most of the Aliens comics but in terms of the Fire and Stone series his is my least favourite – and that’s simply because Prometheus and Omega’s artwork is comparable to that of Den Beauvais and Predator suits the series down to a tee.

That’s not to say Reynold’s artwork doesn’t suit Aliens – it does, very well – but his style has a tendency to look posed or static which is unfortunately due to the way in which Reynold’s works. His Aliens are based off of images of posed NECA figures, he has people act out the panels and draws it. The very first panel of the series is a copy of an Aliens – Colonial Marines screenshot. And once you realize this you can’t stop noticing it. 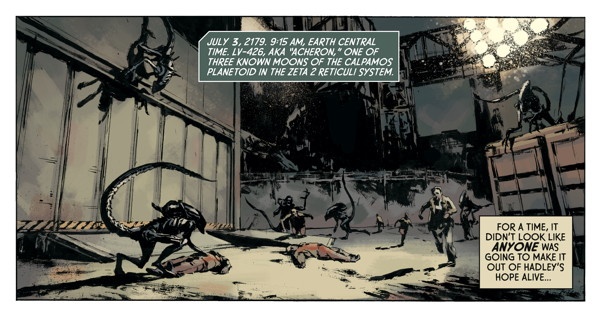 The first panel of the series is literally a copy of a screenshot from Gearbox’s Aliens – Colonial Marines.

It gives the series an almost lazy visual look. The action starts to look static and you start to notice the same hand position of the Aliens more and more. It’s a real shame because his original creations in the series look fantastic. His jungle looks vivid and alien. He really captures the tone of the series.

Over all I would say that Aliens – Fire and Stone is my least favourite of the Fire and Stone series.  The series feels very much like Prometheus in that despite plenty happening, it doesn’t feel like anything actually happened. I learnt very little from the events of the story and I feel like so much of the page count was wasted just ambling about.

In terms of fitting into the series as a whole all Aliens seems to do is provide a short-cut for Francis in Prometheus – Fire and Stone and serve as the bombshell reveal for Prometheus – Fire and Stone #1. Despite a generally good and fitting visual approach, the posed nature of Patric Reynold’s artwork is somewhat of a letdown, especially once you become aware of it.

From Corporal Hicks at AvPGalaxy, I award Aliens – Fire and Stone with 6 out of 10.