Presented as an interactive survival manual, the augmented reality animations bring your favourite xenomorph to life, via a smartphone, or tablet. Created by author Owen Williams following the latest film Alien : Covenant, the book offers an experience you’ll never forget!

The book has been beamed back to us from the future reality witnessed in the Alien movies. The Augmented Reality Survival Manual has been written as if for new recruits of the US Colonial Marines to impart knowledge of identification and combat of xenomorphs. Protecting yourself and mankind against this significant and ever-growing threat is the goal.

For new recruits you will get to see what life of a USM pilot is like and observe ‘on the scene’ footage of the marines in action, in the form of movie excerpts. Whether it’s the first day of your USM training, or you’re a hardened veteran Alien: Augmented Reality Survival Manual is vital to shore up your knowledge of the xenomorph threat and ensure your prolonged existence.

Study a xenomorph autopsy, witness an alien egg hatch in real-time and see the deadly attacks of a face-hugger first-hand!”

For the longest time, the only piece of in-universe reference material that existed for the Alien franchise was Aliens: Colonial Marines Technical Manual. The Tech Manual (often abbreviated as CMTM) detailed the inner workings of the Colonial Marines, their technology and some details about the Aliens.

I’ve never been able to read it cover-to-cover (though Darkness has previously reviewed it). It’s just too dry for my taste but it contains some cool information that you can just dip into. Fast forward to 2015 and we get Alien: The Weyland-Yutani Report (my thoughts on that are here). Much in the same vein as the Technical Manual, the Weyland-Yutani Report was written as an in-universe guide to the Company’s (and the USM) encounters with the Alien.

2017 graces us with another entry into in-universe guides in the form of The Book of Alien: Augmented Reality Survival Manual. The Augmented Reality Survival Manual (ARSM) is framed around the concept of being a guide issued to the United States Colonial Marines to offer intelligence on the Alien, information on previous encounters with the creatures and guidance on how to effectively combat the Aliens. 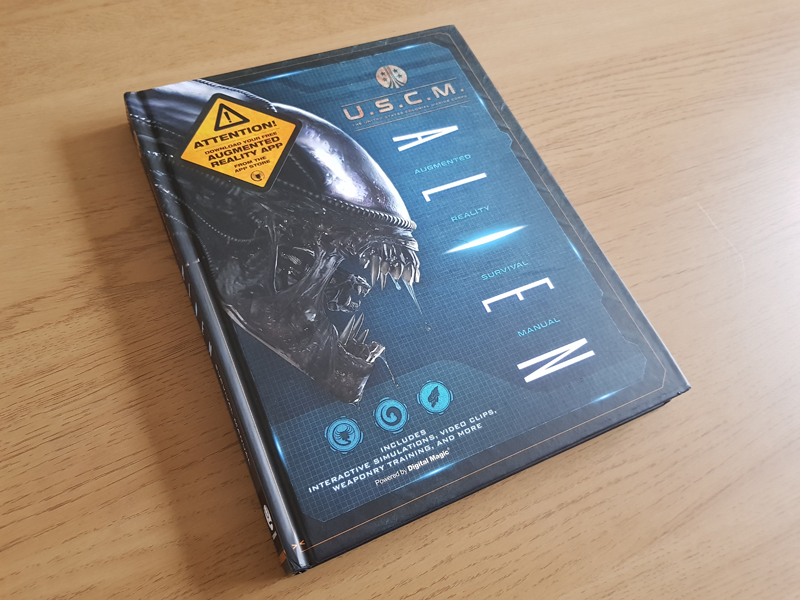 Much like The Weyland-Yutani Report, the Survival Manual is separated into case studies which detail the individual films. As it was published after the film, the Survival Manual also includes a case study about Alien: Covenant and Prometheus, including a dig at the “inexplicable lapses in judgment” which leads to some deaths in Prometheus. I can’t lie, that gave me a good chuckle. As with the Weyland-Yutani Report’s treatment of its Prometheus chapter, this case studies are left understandably somewhat ambiguous and don’t go into too much theory.

Each case study typically contains an overview of the film, details on some of the main characters, information on the primary location of the film and various quotes presented as broadcasted transmissions that are picked up remotely. There’s also additional information scattered throughout. Sometimes it seems relevant to the movie in question (Prometheus has information on the black goo and Covenant has the Neomorph) and other times not so much.

There’s the occasional spread relating to combating the Aliens or information on the Aliens inserted in the case studies and it doesn’t always seem relevant. For example, in the Prometheus case study includes a spread on How to Kill Aliens when the Aliens aren’t encountered during the Prometheus mission and details on the Pulse Rifle are found in the Alien case study rather than Aliens. It just felt a little haphazardly distributed and it felt like both topics would have been suited for their own dedicated chapters.

Interestingly, for how little the Prometheus and Alien: Covenant chapters didn’t want to speculate too much, the later information on the Alien itself was happy to indulge in some fan theories. The whole smooth/ridge heads, drone/warrior caste is touched upon which may please some fans. 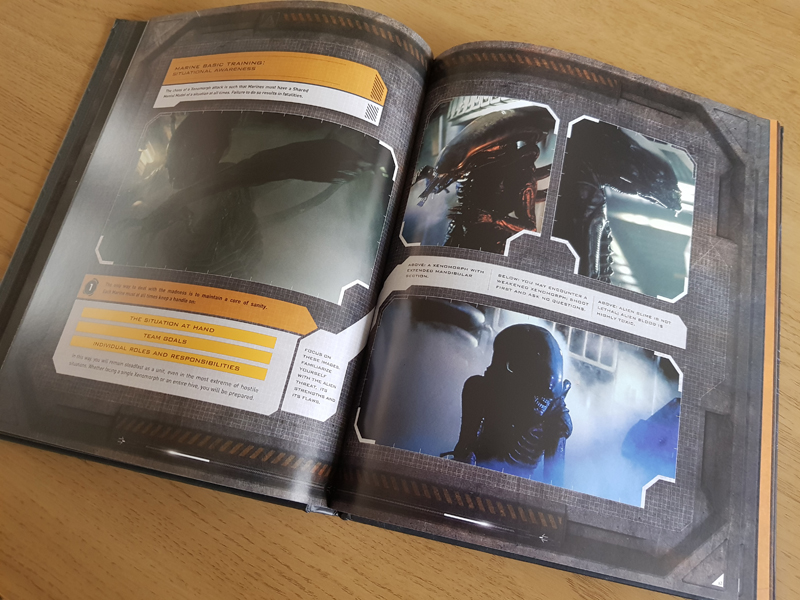 But you’ve seen the films, you know all about what happened. Maybe you’ve read the Colonial Marines Technical Manual or The Weyland-Yutani Report too. So what makes The Book of Alien: Augmented Reality Survival Manual stand out? The very premise of the book gives it a different spin in that it also includes “tactical information” about how to operate during engagements with the Aliens which gives it some nice flavour.

The real draw is also in the name – Augmented Reality. Augmented Reality is something I’ve only really had a passing experience with and it wasn’t until I started looking into Carlton’s other books that I realized it was something that could potentially be really fun in books. I would venture that the most popular example of AR that people will be familiar with would be Ninantic’s Pokemon Go.

I was really curious to see how it would be handled in the Survival Manual and you know what? I really enjoyed it. You have to download a specific app to use with the book and the details are one of the first things you see when you open the book.

Scattered throughout the Survival Manual are various augmented reality videos. When you come to a picture that is grey in tone and covered in lines, you whip out your phone or tablet and open the app, it turns on your camera and you hold it over the picture and watch a video on the page through the app.

Those augmented reality videos are pretty cool but they’re not the real augmented reality stars of the Survival Manual. The original activities are where the fun really lies. In the center of the book are some “training tasks” that you interact with through the app.

You’ll do things like observing an Alien Egg, dissect a facehugger, land a dropship (this one is just ridiculously hard, though!) and use your motion tracker to locate nearby Aliens and take them out! They’re not massively sophisticated tasks but I just found them to be ridiculously fun. They put a nice big grin on my face. 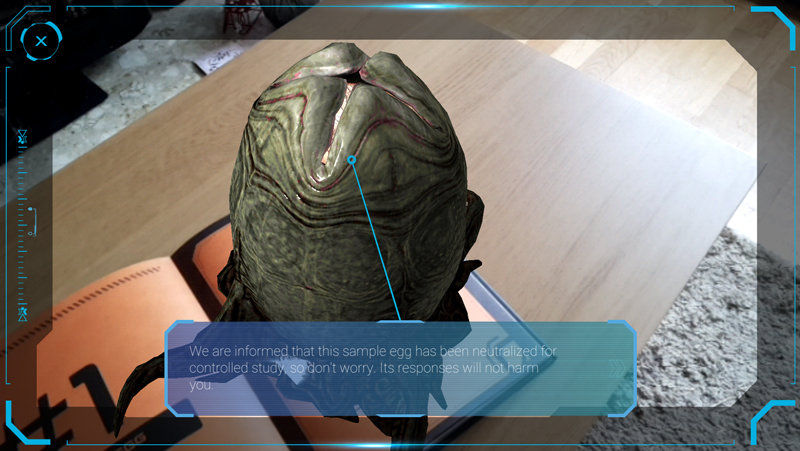 But that also brings me onto my main grievance with the Augmented Reality Survival Manual – the editing and presentation. Instead of being spread throughout the book in other relevant sections such as the egg or facehugger observation being found in the Alien case study, all these tasks are just stuck in the middle of the book. I previously mentioned the seemingly random insertion of the tactical information and intel on the Aliens.

Some of the captions for the various pictures aren’t correct and also don’t seem to fit within the context of the current topic. In one case, we have a quote being attributed to the completely wrong character. There are other examples of errors where the book states that LV223 is Engineer homeworld, calls the Prometheus mission first contact with Xenomorphs despite clarifying later on that the Deacon is not a Xenomorph and while it’s awesome to see Dane Hallett’s artwork in the book, the captions incorrectly state that David drew them aboard the Prometheus.

The book also sources some random information from Aliens: Colonial Marines. It includes a small section on the Assault Rifle, details of the Weyland-Yutani enemies from the game, features the Raven and Crusher and even uses the Wey-Yu shorthand but oddly it doesn’t reference any of the events from the game at all. It seemed a little out of place.

Despite those errors, I ended up enjoying The Book of Alien: Augmented Reality Survival Manual overall. It’s covering old ground but with a unique spin on it and the augmented reality ended up really putting a smile on my face. I don’t think it’s a book that the most hardcore of fans will enjoy but those fans who are collectors or appreciate the thematic aspect of the book or casual fans will likely get a good kick out of it.

The book is currently available to order on Amazon (UK and US) or directly from Carlton Books.