“Mankind’s two ultimate nightmares come together in mortal combat, and whoever wins – we lose. On the remote planet Ryushi, a small ranching community becomes an unwilling participant in a deadly ritual: extraterrestrial Predators have seeded Ryushi with Alien eggs in order to create the ultimate hunt. But what the Predators don’t know is that an Alien queen egg is amongst those they’ve sent as potential hunting stock, and when the Predators arrive, the hunters become the hunted amidst a monumental swarm of Aliens, and they may need to turn to the very same humans they regard as little more than potential trophies to give them any hope of survival.” 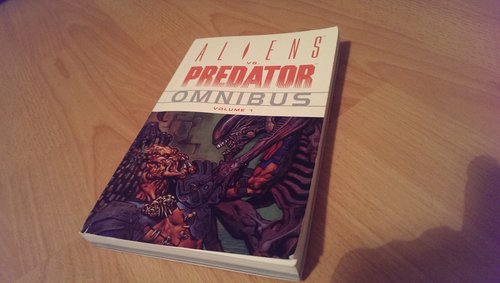 “When the race of Predators tire of hunting easy prey, they capture an Alien Queen and force her to produce enough eggs to turn an abandoned planet into a controlled-population Alien game preserve. However, another Alien Queen accidentally winds up on the planet and a group of Predators finds themselves turned from hunter to hunted in the midst of a planet fully inhabited by Aliens! It’s a non-stop, fast-paced thriller!”

This is the start of it all. Without this particular story you would not be sat here reading this particular review on this website. Without Randy Stradley and his concept for an Aliens vs. Predator story, we wouldn’t have had the Alien vs Predator games that inspired Darkness to create this website or the Alien vs Predator movies that he turned the website into a news website for.

Conceived in a board meeting where Dark Horse was trying to create new ways of using their existing licenses, Randy Stradley brought the extra-terrestrial beasties together for the first time in November 1989 and this series proved to be hugely successful – obviously.

Do you all want to know a dirty little secret? The first time I read the book I just didn’t like it. Queue shock and horror! But this was mostly due to the visual side of the series, specifically the colouring. The original prologue and epilogue were originally black-and-white but for the collected edition they were coloured by Monika Livingston. The version of Aliens vs. Predator included in this Omnibus has actually be recoloured by InColor and I really dislike it.

Phil Norwood and Karl Story providing the pencils and inks for the most of the series, with Chris Warner and Robert Campanella filling in for the 4th and final issue. All the artists did a fantastic job with making Aliens vs. Predator look like it fits well into the franchise. The colony is presented in a way that makes it look very similar to Hadley’s Hope, giving it that pre-fabricated look. 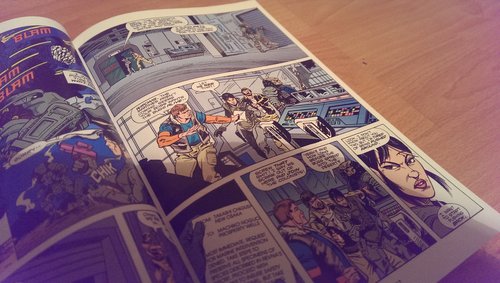 There are a lot of minor little details that really made me smile too – such as the Yamaha logo on the hover bikes, the logos on the uniforms and backgrounds within the panels. The artists included a lot of detail.

But the colouring… Oh my lord. The colouring is definitely the thing I dislike most about the series. The colouring work is just awful. Aliens are blue one page, grey and purple another. Large swatches of bland colours are spread across the page which makes it look terribly dull.

The way the Aliens colours changes frequently, going from large blue beasts to some strange purple and grey creature frustrated me a lot. At one point, the character Scott also has his hair colour change. It is incredibly hard not to notice the horrendously inconsistent colouring, and quite frankly, the use of dull and dreary colours. 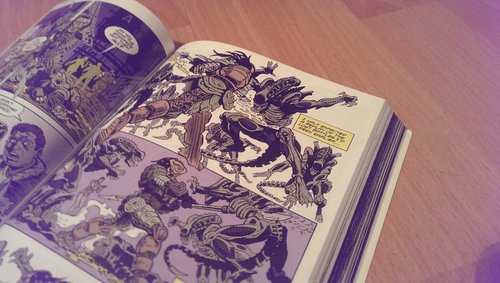 Whilst Randy Stradley did a fantastic job at knitting the two franchises together in a very logical way, the decision to present the Predator character Broken Tusk as an anti-hero did cause some confusion in the way of the motivation of the other Predators. Whilst Stradley makes it clear that Broken Tusk is the leader, it isn’t until the Perry’s novelisation that we understand the other Predators are breaking the rules – I always hated how the Predators killed some unarmed humans in the comic series. The novelisation goes to explain that a younger, less experienced Predator took over the group.

Character-wise, Stradley does a commendable job at making his main character – Machiko Noguchi – likeable and well rounded. She felt believable and was a nice driving force throughout the series. I believe her decisions at the end of the story were better handled in the novelization but it’s important to take into account the limitations and restrictions of the comic format.

He has a number of secondary characters that are also well written and presented – whether we’re supposed to like them or dislike them, they do their job. In particular we have Hiroki as Machiko’s support and motivation whilst we have Ackland as the human antagonist. 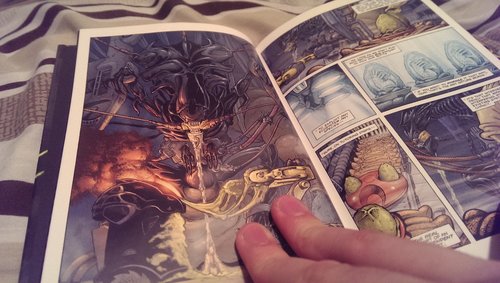 I’m able to appreciate Aliens vs. Predator much more now, now that I’m able to look past the horrid colour work that seeps from the pages into my eyes. Aliens vs. Predator is a brilliant start to the franchise and one I would love to see completely redone by Wez Dzioba as a special re-release. I would snap that straight up like a face-hugger seeing John Hurt’s face for the first time.

Written again by Randy Stradley, Blood Time is a short that focuses on the culture of the Predators as defined in Aliens vs. Predator. With art by Phil Norwood and colours by Frank Lopez, Blood Time suffers from the same problem as many of these older comics – really bad colouring.

Lopez uses bright, washed out colours, not allowing much detail into the pages. Tonally, it just doesn’t feel like it fits into either series. As with issue #1 of the original series, a re-colouring of this short was done by Wez Dzioba for the special hardback book for Rebellion’s Aliens vs. Predator (2010) and it looks much better! 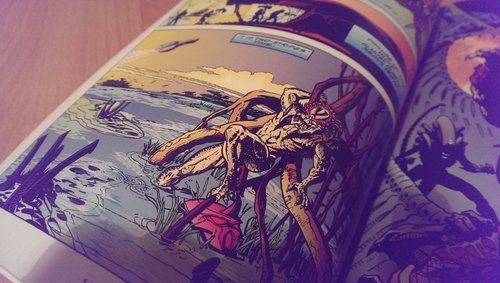 The darker colours make the comic feel like it fits in both the Alien and Predator franchise and a better level of detail is included.

Storywise, Blood Time, introduces us to the character of Top Knot. Like Broken Tusk, he is a leader of one of the Predator tribes who returns in War. The hand-less Predator also appears again in Duel. The narrative follows a young hunter known as Two Stripes, revealing just how strictly the Predators adhere to the rules of the hunt. It’s a very nice little short and I enjoyed reading it.

“The violent clash of Alien against Predator left the planet Ryushi a desolate wasteland. But now, years later, a mysterious alien beacon beams a distress signal from the supposedly abandoned world. When Marine ship Brilliant responds to the call for aid, they step neck deep into disaster!”

Like the two stories before Duel it comes from the mind of Randy Stradley with artwork by Javier Saltares, Jimmy Palmiotti and colours by James Sinclair. Duel is a two issue story that takes place after the events of Aliens vs. Predator and returns us to Ryushi, now a world completely void of human life after Machiko leaves the planet at the end of the initial series.

The basic premise of the story is that a small ship of Colonial Marines are redirected to Ryushi to investigate a distress call being emitted from the planet.

There are several things, narratively, that I quite liked about Duel. At this point in the series’ history we obviously hadn’t had much interaction between the Alien and Predator series so much of reader’s expectations would have been based on the previous releases so when Randy Stradley sets up the unknown distress call and starts to build towards a Derelict ship (like in Alien and featured in various other Alien comics), it comes as a surprise when they find a damaged Predator ship. 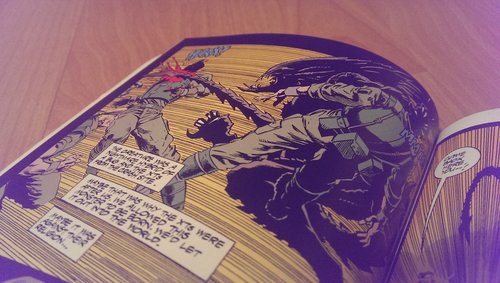 It was only natural that after bringing the Aliens and Predators properties together that we would also see a combination of that in the form of a hybrid. Duel was the first time we ever saw a hybrid and whilst that trend has continued in the video games and movies (there was even one in the Aliens Predator CCG and one coming up in the Prodos Games Miniature Game), this has only ever happened twice in the comics (the second and final time was in Deadliest of Species).

I’m pretty fond of the Predalien as featured in Duel. It is included in the opening pages of the series but it’s kept hidden, teasing at the creature. When it eventually births, it surprises the Colonial Marines (and I would have imagined, when this was being seen for the first time, the reader) and creates all kind of hell.

The design is based off of the Dave Dorman design and I am a big fan of the design. Instead of the floppy dreadlocks that are typically added to the designs nowadays, the Predalien is shown to be a larger, spikier version of the Alien and I think the design works really. 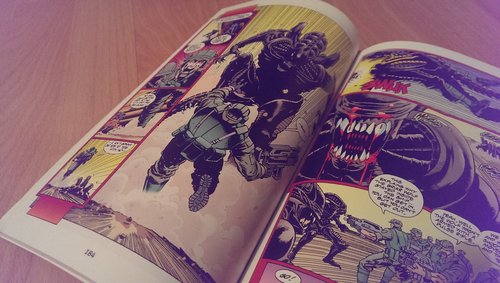 Character-wise the story has very little to offer. The only moment that had me surprised was when one particular character (who had received the most attention, I feel) was killed. Other than that these are just cookie-cut characters here to be taken down by the various extra-terrestrial beasties.

For those Predator fans out there, Duel also sees the return of the young Predator who lost his hand in Blood Time. In a somewhat too similar style as the first series, we see the Predator and Marine survivor team-up against the Predalien. I wasn’t really keen on this recycled move so soon after initial series.

That said, there was a great moment I always love to see – very similar to Three World War – where Aliens burst up from hiding places under the sand to surprise the Colonial Marines. I really hope to see something similar to this in a theatrical setting.

I always feel like a bit of a broken record when I comment on the visual side of most of these older comics. Anyone who frequently reads my reviews will know how much I dislike some of these older comics – primarily for the colour work – because they look bland, boring and undetailed. Duel is no different.

Despite the poor colouring and the lack of memorable characters, I did really enjoy Duel. It’s very nice to see the very first introduction to the Predalien and to return to the aftermath of Ryushi.