“First blood or last breath – those are the only choices in Aliens vs. Predator: War! The Predators converge on the seed planet Bunda for the biggest bug hunt yet, each taking position to draw first blood. Machiko, a human who has been inducted into the Predator clan, is forced into a duel in order to claim her rightful place in the upcoming hunt. But when a new group of humans shows up, what began as sport becomes serious business.”

War is separated into 2 parts, both of which are written by Randy Stradley but both art teams are different. Part 1 is drawn by Chris Warner and James Sinclair is responsible for the colour work. This time Sinclair provides a darker look and more appropriate colour pallet than his work on Duel and it looks absolutely gorgeous! I was very pleased with how the first part looked but unfortunately it comprises of a single issue and doesn’t last throughout the series.

War serves as the direct sequel to the original Aliens vs. Predator series following Machiko Noguchi now that she’s made the decision to join with the Predators. It also acts as a sequel to the Aliens series, Berserker (or Frenzy as it is renamed in the Omnibus) and brings Jess, Ellis and Lara together with Machiko. It also features a very brief appearance from the Predator from Duel. 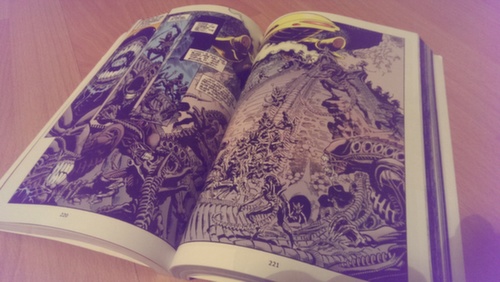 Part 1 introduces us to how Machiko is getting on in the Predator culture and Randy makes it all very believable. Through her we are given information and perspective on the just how the Predators think and behave. Randy starts to develop on the rules of the Predator culture, building strict rules into their hunting society. While Randy uses the word honor once, he doesn’t quite emphasize the space-Ninja attitude that Steve Perry infuses in the novelizations.

I’m very happy with how Randy Stradley handles Machiko’s attempts at integrating into the Predator society but just isn’t able to. He slowly paces her failure over the course of the series until the conclusion where she has to make a choice between the Predators and her human brethren. It worked very well and came across as very believable.

Machiko is largely kept away from the characters from Berserker until the end of the series and they don’t receive too much in way of attention. Their arc is largely somewhat of a repeat of Berserker in that Ellis has to step up to save the day. And for some strange reason Jess gets a pigmentation change and is no longer black. Their parts of the story are largely unimportant. 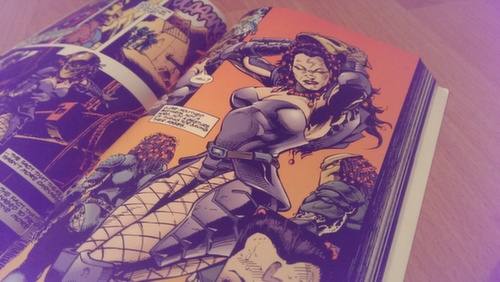 Something I’m not terribly fond of is how the comics tend to handle the hybrids. I can forgive the original series for their lack of variety in the Alien designs due to it predating Alien3 when the trait was first demonstrated, War is set after Duel which included the first appearance of the Predalien. Both War and Duel were written by Randy Stradley so I find it kind of irritating that he didn’t continue using the Predaliens when he clearly showed Predators being face-hugged.

At the risk of constantly repeating myself, the artwork of Part 2 was largely disappointing to me. The colour work of the comics of this period really do nothing for me. The colouring washes out any detail to be found within the linework and this continues throughout the series. The colour pallet is dull and features very little in way of shading and variety.

I did enjoy reading this series as I find Machiko to be an interesting character. So far, she’s the only human to have spent more than a single incident in the company of the Predators and I much prefer Randy Stradley’s interpretation of their culture than the alternative Steve Perry or John Shirley offer.

“Aliens loose in the Tokyo subways of the future is bad news. But when these monstrous beasts are pursued by Predators, the fiercest hunters in the galaxy, bad quickly becomes worse. Caught in the middle is Becca Shaw, a reckless journalist on the trail of Gideon Suhn Lee, a mysterious techno-billionaire who won’t let anything stand between him and the secrets to immortality that the Predators hold. When Becca and Gideon clash, it might be the Aliens and Predators that run for cover!”

Eternal is one of many Aliens/vs/Predator stories from the pen of Ian Edginton (and his first of two in this book). This comic is easily one of my favourite Aliens vs. Predator stories. It is set in an undefined point in the 21st century and sees the character of Gideon Suhn Lee determined to locate some Predators.

You see, he is some hundreds of years old having discovered that by consuming the heart of the Predators he is able to extend his own life. Over the many decades, he has become obsessed with his source of eternal youth and has acquired his own archive of Predator technology and even has a crashed ship in his possession.

Getting further into the ship, they find the Predator’s store of Alien eggs and a small number of Aliens escape into the sewer system beneath the tech-noir Japanese city the comic is set in. 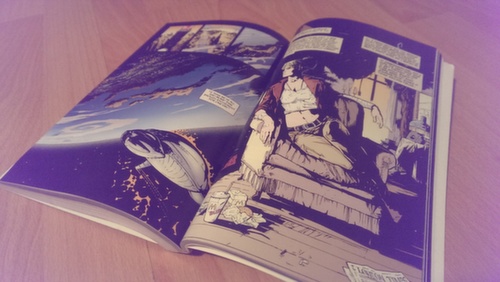 Typically I’m not a fan of stories featuring the Aliens in contemporary settings, however, this one works really well, keeping their existence contained and along with Edginton’s use of Lee and his second main character, Rebecca McBride, a journalist, he crafts an intriguing and driving story.

His characters are largely interesting and a good use of dialogue boxes help keep the information flowing, driving a very nice pace that carries well throughout the entire comic.

The artwork provided by Alex Maleev and colours from Perry McNamme (and Dark Horse Digitial) create a very moody and atmospheric feel that supports to the underworld and slightly noirish feel of Edington’s story.

Eternal is another strong entry in this essential collection of comics for Aliens vs. Predator fans.

Written and drawn by Alex Maleev (who also did artwork for Eternal) and colours by Staissi Brandt, Old Secrets is a six page short originally published in AvP – Annual #1. The artwork is very nice, with Brandt bringing a dark and moody tone to Maleev’s artwork. That said, Old Secrets is an inconsequential story that doesn’t add anything to the franchise. 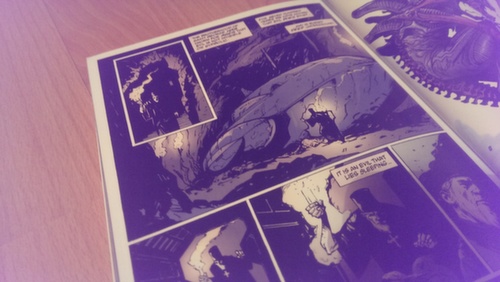 It features a priest telling the story of Saint George slaying a dragon (a Predator) and ends with revealing that he is aware of a crashed Predator ship with Alien eggs aboard. Nothing really happens and upon turning the final page this comic disappears into the depths of your memory as if you’d never read it in the first place.

Ending Volume 1 is The Web, a short scripted Ian Edginton (making this his 2nd story in Volume 1) and artwork by Derek Thompson and Brian O’Connell. For a short, I rather enjoy The Web. For one the art is all in black and white. There aren’t too many Alien/vs/Predator comics like this but I tend to really like the looks of them.

Without the dubious colour work of most the comics of the time, we’re able to focus on and appreciate the lovely line work. In particular the strange and ornate designs used by Thompson are really brought out. I loved how biomechanical many of the designs were and it really evoked that feeling of strangeness that we all love from Giger’s environments in Alien.

I also really liked the design of the Alien and the Predator. Thompson made some small changes to their masks adding extra details that normally wouldn’t have stood out or would have been washed away by the colour. The Aliens retained their classic, deadly appearance and no abstract interpretations were added. They looked fantastic. 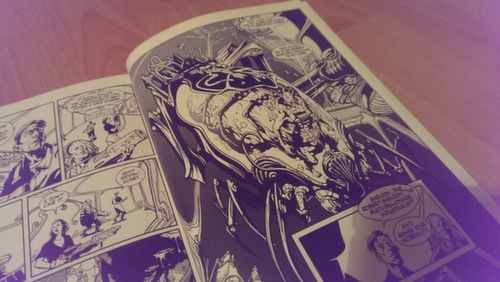 Something else I quite like about The Web is that the story is a spiritual sequel to the original series in that in includes the character of Robert Sheldon. He was the son of the family that first encountered – and by encountered, I mean gets slaughtered by – the Predators. He has turned insane, setting up a trap in which he lures Predators to his world with the temptation of a ship in distress and a renewable hive of Aliens and then totally annihilates the Predators once caught in his web.. Web…You see what I did there?

Whilst Edington doesn’t go into detail, Robert Sheldon has now become afflicted with some illness that has left his body encased in strange biomechanical device that is loving designed and drawn by Thompson. Much of what I saw in this short also reminds me of Dune – or what I imagine Dune to look like when reading it. I thoroughly enjoyed the visuals in The Web.

Much of the other characters are non-consequential and there is no emotional connection to them. The only reason the other human characters become involved in the story is to steal the computer that is emitting the distress signal. That said, I do like that Edington didn’t pull his punches and ended the volume with a bang.

Despite the dubious colouring of the majority of the series in Volume 1, I strongly recommend this book to any Aliens/vs/Predator fans. It provides the bulk of the main series (Machiko’s) and those shorts connected to that series. As well as offering the essential Alien vs Predator story in one offering, it also contains the fan-favourite Eternal and the beautifully drawn Web.

If you haven’t already ventured into the world of Aliens vs. Predator comics, then this is a perfect in.

From Aaron Percival, here at AvPGalaxy.net, I award Aliens vs. Predator – Volume #1 with a 4.5 out of 5.