Comprehensive and definitive volume telling the complete story of how Alien was made, featuring new interviews with Ridley Scott and other production crew, and including many rarely-seen photos and illustrations from the Fox archives.

In 1979 a movie legend was born, as Twentieth Century-Fox and director Ridley Scott unleashed Alien and gave audiences around the world the scare of their lives.

To celebrate the movie’s fortieth anniversary, author J.W. Rinzler (The Making of Star Wars) tells the whole fascinating story of how Alien evolved from a simple idea in the mind of writer Dan O’Bannon into one of the most memorable sci-fi horror thrillers of all time.

With brand new interviews with Ridley Scott and other key members of the original production crew, and featuring many never-before-seen photographs and artworks from the archives, The Making of Alien is the definitive work on this masterpiece of popular cinema.

One of the things I really love about the Alien and Predator films is that I always seem to be learning about new aspects of their production or their legacy. But yet, when I see news of a new behind-the-scenes book or documentary the first thing I always wonder is – “what is this going to tell me new?” or “what is this going to offer me different?”

I don’t pretend to have the kind of amazing knowledge that the likes of Valaquen from Strange Shapes or wmmvrrvrrmm from Alien Explorations do, but I like to think I have a reasonable knowledge. And while I always revisit previous documentaries or books, I still get more excited at the prospect of learning something new or seeing a different take on the material.

Enter J.W Rinzler and Titan’s recently published The Making of Alien. Rinzler is well regarded for his work on The Making of Star Wars and The Complete Making of Indiana Jones. I’m not a huge fan of either property so I didn’t go into his work on Alien knowing a great deal about him, other than that he had a reputation for doing fantastic work.

And having read The Making of Alien, I can say it’s a well-deserved reputation. Rinzler’s work on The Making of Alien is nothing short of amazing. I’ve seen people mention the occasional small errors and noticed some myself (Hill and Giler weren’t involved in Prometheus), but over all this feels like the most comprehensive recollection of the journey in bringing Alien to life. 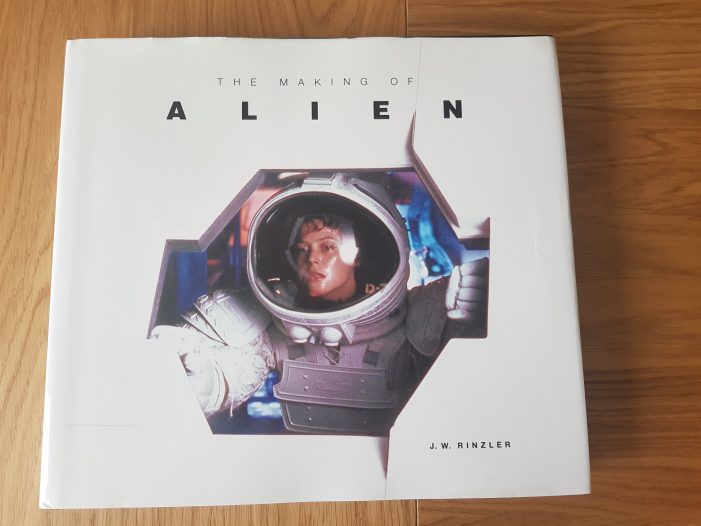 While the book utilized a lot of existing behind-the-scenes material, it is also bolstered by new interviews that Rinzler conducted for this publication and a lot of material that has been locked away in the Fox Archives that doesn’t seem to get pulled out too often. I was particularly thrilled to see so much reference to internal memos, press releases and most interestingly, the actual call sheets.

In terms of the existing material, I was especially pleased to see H.R Giger’s diaries used. I’ve only recently gotten around to purchasing H.R Giger’s Alien Diaries and the frank insight gained from that was such a massive eye-opener. Due to the cost of the book it’s not one I except a lot of people to have read, so to see that referenced quite a lot in Rinzler’s Making of Alien was something I really liked as it’s going to be eye opening for a lot of readers.

Peter Beale’s comments in particular stuck out to me following my initial read through of the Making Of Alien. As the “managing director of production in the UK,” Beale could been seen as the personification of 20th Century Fox on the set of Alien and his own comments regarding the production were just fascinating. I thoroughly loved that particular angle of insight into Alien’s making.

Like most behind-the-scene books, The Making of Alien follows the production of the film in a chronological order but it went even further than most of the previous efforts. I was really pleased to see a lot of focus put on the major players such as Sir Ridley Scott and Dan O’Bannon before they actually started work on Alien. 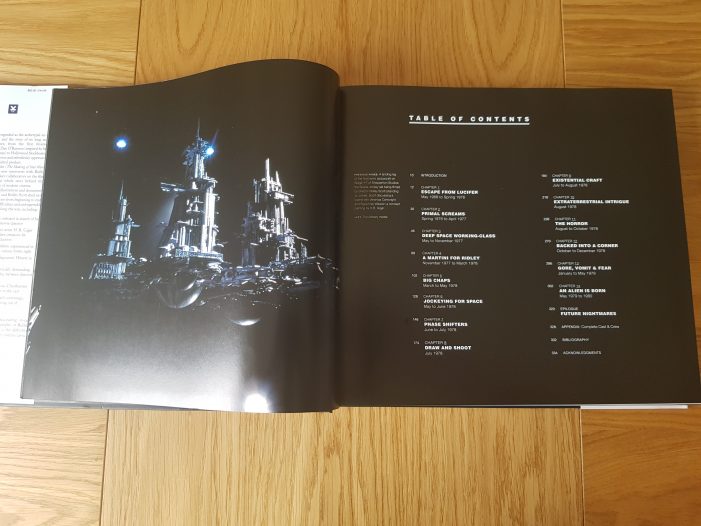 There’s a lot to understand about the journey they took before they started working on the film, and it’s not something I think gets focused on enough so the attention that Rinzler put on their own personal journey was something I was especially pleased with.

Rinzler also highlighted how the actual scripts evolved over the course of Alien’s production. Certain drafts of the script have been available for some time, but there’s elusive middle drafts that we don’t really know too much about.

Of particular interest are the first few rewrites by Walter Hill and David Giler. Though the “red cylinder” script is available online, I don’t think it’s particularly well known about. The red cylinder draft is the 3rd written for Alien, the second by Hill and Giler (which I didn’t figure out until this book).

Even more elusive is Hill’s very first draft of Alien, the even more mysterious “red city” version of Alien. To actually see those versions highlighted in this book was fantastic, and I think are one of the things that will be brand new information to a lot of people. 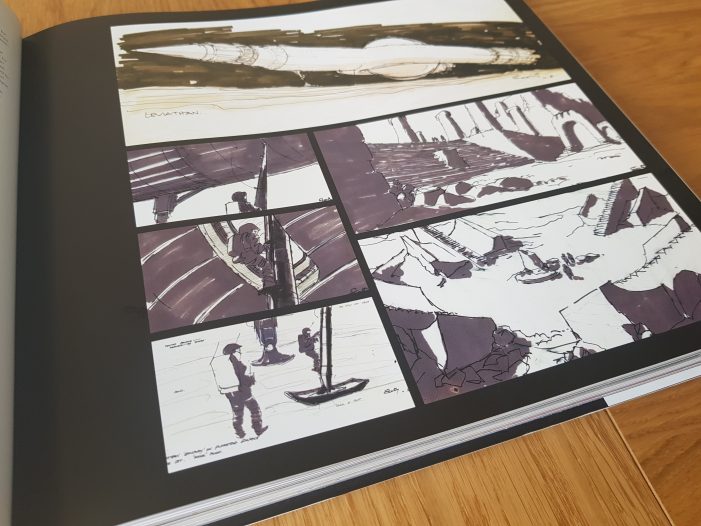 In March 1977, Peter Beale commissioned Elliot Scott to do artwork for the Walter Hill’s first draft of Alien.

Another aspect of Rinzler’s Making of Alien that I absolutely loved was that he seemed to have access to the call sheets. So not only did it follow a chronological story of pre to post-production, it was able to take the reader through the journey based on the exact filming schedule. And I loved that!

Not only was it giving us an unprecedentedly specific look at the order in which Alien was filmed, it also clarified a lot of questions I had over who was in the Alien suit for a given sequence. So that was something I was absolutely thrilled with about the book!

Having read and listened to various interviews with J.W Rinzler, I know he went into this book without a huge amount of Alien knowledge. That was part of his journey while researching the book, and in his words, it meant he took on the book without bias. 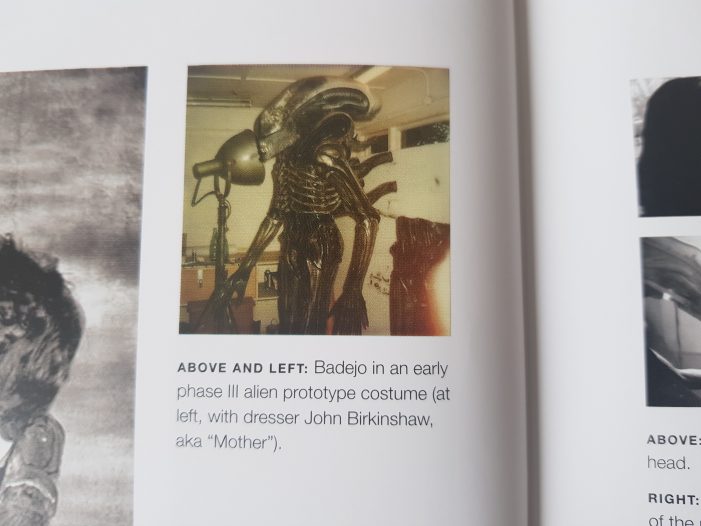 In terms of presentation, The Making of Alien is a gorgeous book. It’s very easy to read, with gorgeous spreads of the various artwork and photography. I was familiar with the majority of the stills in the book, but unfortunately some of the photos that I hadn’t seen before – or very often – were tiny!! I wish that those rarer images were larger and easier to see!

Small presentation issues and errors aside, J.W Rinzler’s Making of Alien is simply the most comprehensive exploration of Alien’s production. If you have even the slightest interest in the behind-the-scenes story of Alien, this is a must-buy. I’m really hoping that Rinzler will return and dive into the rest of the films in the series (and it looks like he’s already back for Aliens)!

I thoroughly enjoyed the experience of reading this book and it’s one I can guarantee I’m coming back to. I’ve already been using it as a reference and clarification during discussions. The Making of Alien is an absolute treat for Alien fans. Do yourself a favour and pick up the book! J.W Rinzler’s The Making of Alien is one of the best Alien purchases that you’re going to make.