Unless you’ve been keeping off the Internet lately – likely avoiding those Avengers and Game of Throne spoilers? – you’ve probably seen some of the Internet hype around Alien: The Play, a stage version of Alien put on the drama club of the New Jersey North Bergen High School.

Alien vs. Predator Galaxy community member predxeno was fortunate enough to snag a ticket to the encore production that took place on Alien Day 2019 and was kind enough to send in a review! (Hicks)

What first started as a small town production in North Bergen quickly grew as a viral sensation across the Alien community worldwide.  Alien: The Play is a modest yet exciting performance by the Drama Club in North Bergen High School under the direction of director Perfecto Cuervo.

It’s clear that as much detail and dedication was placed into the play as possible from the set pieces to the screens used to give context to the play.  In fact, Sigourney Weaver herself crossed the river from New York and made a surprise appearance at the beginning of the show to greet the cast and audience.

The set pieces and costumes are very faithfully created and put together, and even the clothes the actors wear look as if they were pulled right out of the movie.  Throughout the stage, the various set pieces utilize enough electronics to make even a Christmas tree jealous; live computer screens are used onboard the Nostromo’s console and even Mother’s chamber is cleverly lit up with Christmas lights. 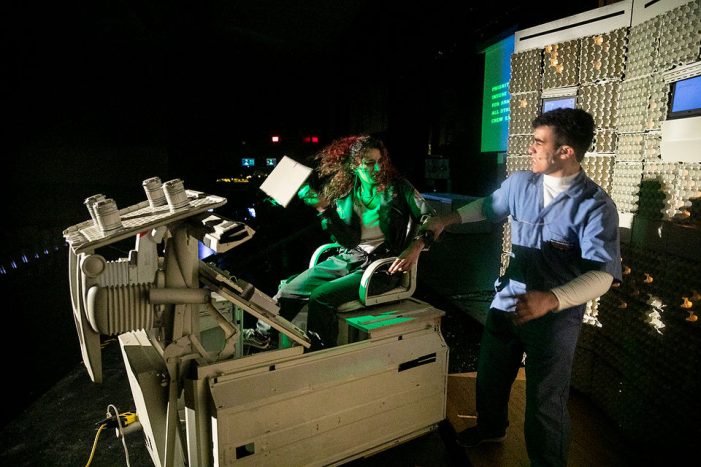 The first thing a fan of the original 1979 film would notice about the play is that it does not copy the film line for line. Instead the actors each give their own rendition of what is said by each character.  This is not unusual for plays to do so, as each actor likes to provide their own interpretation of the character they play and it actually serves to benefit the play as a whole as the new dialogue helps keep the story familiar yet different.

Gabriella Delacruz casts a strong presence as a tough, no-nonsense Ellen Ripley.  Forceful in every manner yet more than capable of pushing herself as needed especially during the action and suspense heavy sequences, actor Delacruz does her role justice.  The rest of the casting is just as strong; fierce when needed but also capable of levity in situations where the original source material would have let such moments pass by.

Stealing the spotlight is actor Ibrahim Jaludi whose youth steals the show with his humor and wit as the play’s version of Brett.  Jaludi provides a humor and levity that certainly wasn’t in the original 1979 movie and it only serves to supplement the production because of it.

Out of all the entertaining moments, perhaps his most memorable performance in the play is in the engine room after the Nostromo lands on LV-426 where both he and Parker try to annoy (or maybe impress?) Ripley by dancing to rock music.  This new interpretation of Brett sees him not only as an enjoyable comic relief but also as an individual with more personality than the original film allowed which makes his demise by the Alien all the more painful as the story continues without his comical charm. 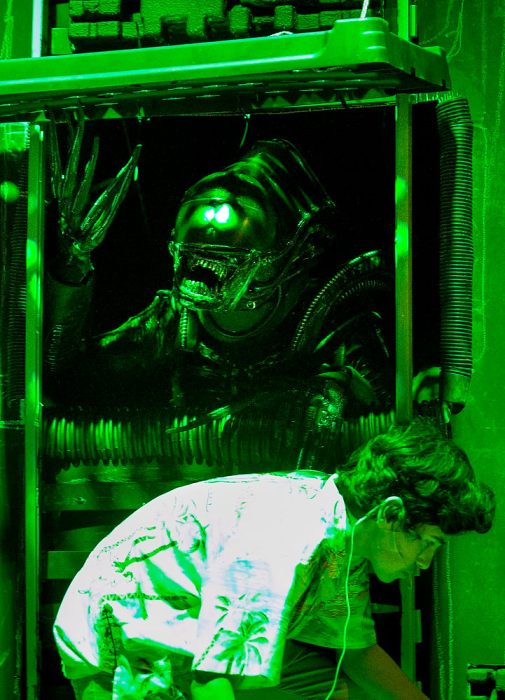 The humor of the characters provide an enjoyable levity that is a fresh take on a classic story, however there are certain points where the acting does feel rather forced and overacted in the production which makes the characters themselves feel too forceful during quiet moments and too angry in situations where there should have been calm instead.  However, this is not unusual for young actors who often believe that being a good actor means “more is always more” and may not understand the detriments of overacting.

The play benefits immensely from the creative guidance of director Perfecto Cuervo and many scenes from the production are portrayed with ingenuity considering a play’s limited scope of ability compared to a movie.

On multiple occasions, actors walk off-stage and through the aisles to demonstrate the traversal of long distances; from the curious yet cautious trek of Dallas, Lambert, and Kane to the infamous Derelict, to Ripley’s panicked run to and from Mother’s self-destruct override.  While the movie may take advantage a larger budget and special effects, the play is able to make use of its 3D presence to further immerse the audience into its story.

The story’s most remarkable scenes are carried out with great love and care; Kane’s exploration of the egg chamber (and eventual attack) is still foreboding and chilling to watch.  Furthermore, the infamous chestburster scene is faithfully recreated with an explosion of blood aimed directly at Lambert, just like in the movie; a scene which drew chuckles from the audience for its faithfulness.

However, it is the ventilation shaft scene where Dallas is taken that is perhaps the most well-crafted scene in the entire play; it very cleverly put together using both on-stage action, pre-recorded scenes of Jason Lopez as Dallas, stock footage from the original 1979 film, and even video recordings of Alien: Isolation to showcase the darkness and claustrophobia inherent in the dark and cramped space. 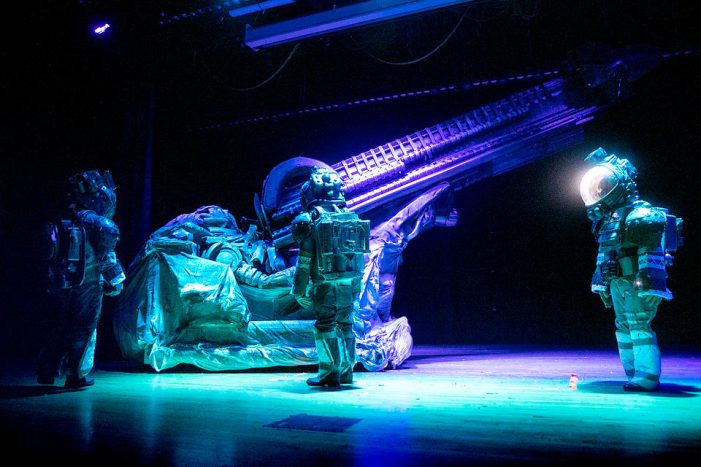 Overall, the play is a fantastic experience and a wonderful way to relive the nostalgia of the 1979 film.  The set pieces are very authentic and while the characters themselves are somewhat different from the personalities we’re accustomed to seeing on-screen (in both good ways and bad), they prove that even in the modern movie age where special effects and action sequences make all the hype, it is only the human spirit itself that can drive away the darkness whether it is human greed or an alien threat.