Alien Vault: The Definitive Story of the Making of the Film is the latest book to be released focusing on the making of Alien. I recently spoke to Ian Nathan, editor for Empire who just also happens to be author of this book. 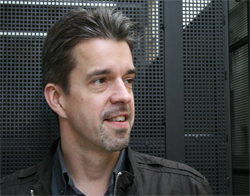 AvPGalaxy – From the passion you wrote Alien Vault with it’s easy to see that Alien is important to you. I know you covered it in the book but can you tell us a little about how you fell in love with Alien?

Ian Nathan – It’s funny, but it wasn’t exactly love at first sight. As I say in the book, I remember my mum seeing it when I was only ten, and caught up with the whole Star Wars thing. She described a film I just couldn’t grasp — one that was so scary people could only laugh. I now know she was talking about hysteria, the reaction people were having to the chestburster and everything that followed. It must have been so amazing to see the film without knowing what was to come – what a primal experience!! Naturally, like most people my age, I saw it, illicitly, on VHS at 14. I am sure we bunked off school for the afternoon, snuck round a mate’s house whose dad had rented the film — I remember the spongy rental box. We were I think at little bored at first — we hadn’t quite shaken Star Wars from our systems — but were bowled over by the second half.

That was when it was implanted into me, but it took return visits for me to realise how beautiful the film is. Not just in Scott’s peerless visuals, and Giger’s designs, but something in its ethereal quality – it feels otherworldly, strange, like a dream. Beyond its genius as a thriller, it haunted me. What might of happened to Dallas (this was before the DC)? What was Ash exactly? What was the Space Jockey, and where did it come from? The whole feel seeped into me. I couldn’t forget it.

I had one of the best ever experiences I have had in a cinema with Aliens – that film is so damn exciting. But afterwards I returned, on video, to Alien again. That might have been the point when I realised I was truly in love — that as brilliant as Aliens was, I understood why Alien was better.

AvPGalaxy – How has Alien influenced your life?

Ian Nathan – Well, it is one of the films that shaped the entire direction of my career – to write about film. (Blade Runner was certainly another). I wanted to explore films, films like Alien, and explain (if to no one else, but myself). I have had a very privileged life living and breathing movies. It was funny meeting Sir Ridley Scott, he likes to talk pragmatics — nothing flowery, just the whys and wherefores. You need to focus your questions!

Beyond that, I think it is a film that set a standard for me. That kind of permanent experience — it remains one of my measures for other films. 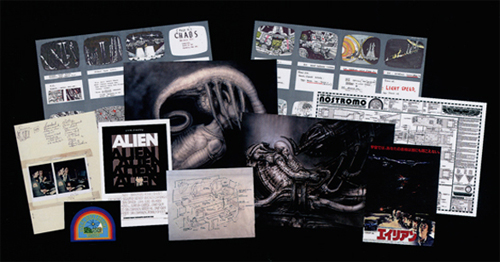 AvPGalaxy – Many books and documentaries have been written and filmed about Alien. Why did you decide to write your own?

Ian Nathan – Well, there is a prosaic answer to this — because I got asked to! An American book company came to me, through a UK publisher. They, perhaps with half an eye on Prometheus getting underway, convinced Fox to open up their archive of pictures and materials (and Ridley Scott as well), and set about finding an author who could tell the story. Obviously, being part of the world’s best movie magazine helped them chose me, but I have become an Alien expert (I have covered all the films in some way, interviewed all the main players, live and breathed the franchise) and eagerly made my pitch. With the store of Alien interviews and opinion I already had to hand, there was a sense of destiny about it. This was the one film, I wanted to write a book about.

AvPGalaxy – You’ve previously mentioned that you consider Alien Vault to be a biography, not a making of book. How did that view effect the way you wrote the book?

Ian Nathan – My initial concern was how do you better the Anthology? It’s pretty much the industry standard in DVD extras: detailed, completely thorough, and, for a studio product, bracingly honest (especially about Alien 3). The film is also over 30 years old, so much has been said: an entire mythology has grown up around the making of Alien. I needed to find a new way of telling the story — and the biography concept came when I thought how many times books are written about presidents, artists, scientists, and movie stars. Do you know how many Dylan books there are out there?  How many Brando tomes? So, I thought, why not Alien? It is a classic. My approach aimed to encompass not just the making of, but a sense of what is was like to be there on set; an exploration of the mythology (both in and around the film); and, importantly, the experience of watching the film itself. Within this, I tried to work out what really happened, for instance, with the chestburster – how they shot it. The cast had to know something… there were multiple set-ups. I think it was the sheer severity of the blood and offal that knocked them off their feet (literally in Veronica Cartright’s case!). And the pictures and artwork really helped, I adore those off camera shots – there is a laughter and smiling as well as intensity. 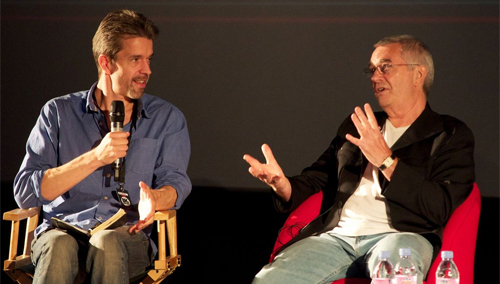 AvPGalaxy – Did your position at Empire contribute towards the book at all?

Ian Nathan – Of course. The magazine has granted me access to the Alien films, and opened many other doors for me. I am not sure the publishers would have chosen me without the credibility of my position on Empire. It also has taught me a sensibility that works for the book — a love of writing about movies, really just talking about them. I am just a moviegoer at heart, and this is just me waffling on in the pub about one of my favourite films – albeit for a really long time!!

AvPGalaxy – Alien Vault is a compilation of existing material and new. You conducted several recent interviews for the book? How much insight did you gleam from these new interviews and how much was in the book?

Ian Nathan – There is a lot of the recent stuff in the book from Sigourney Weaver and Ridley Scott. In fact, I would say I have used about 90 per cent of my Scott material — rightly, he is the dominant voice in the story. Some of the things I really wanted to tackle with him concerned how much they investigated the concepts in the script: how long did the creature live for? How much did it understand? Did Ash know he was an android? Did The Company already know of the creature before they hit the planetoid? Scott had had some crazy-brilliant ideas that never made it the film such as having one of the crew as a Martian! One thing that never made the book in the end, was an investigation into actually when the movie is set – you online guys really helped. It was about extending the experience of the film, as well as documenting the process of creating it.

AvPGalaxy – Was there much in the way of other collaboration with others involved in the movie?

Ian Nathan – Absolutely, I have spoken to a lot of the technical guys (mostly good plain-talking Brits!). Special mention should go to line producer Ivor Powell and (uncredited) art director Roger Christian who were a real mine of knowledge. Overall, there are two who remain elusive: Ian Holm and Walter Hill. Both seem reluctant to talk about Alien. Dennis Lowe who worked in the Bray studio model shop is doing an amazing job recording the memories of as many crew as possible as video – you can find it online, he is creating a lasting record of the film.

AvPGalaxy – How long did it take to complete the project?

Ian Nathan – In terms of writing and captioning and organising the book it took six months, but factor in the years of coverage with Empire and the years of simple adoration and it goes all the way back to bunking off school at 14.

AvPGalaxy – What would you say was the biggest challenge you faced while writing Alien Vault?

Ian Nathan – I would go back to the DVD problem – it is just so in-depth. How do you say something new about such a well covered movie. All the websites like this one serve the film so well. How do you stand out? The pictures really helped, and hopefully I’ve at least added to the excellent Alien coverage already out there. 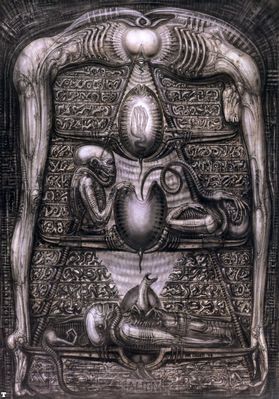 AvPGalaxy – Several times throughout Alien Vault you mentioned that the unused pyramid scene implied male and female aliens. Admittedly it’s been some time since I read O’Bannon’s draft but I just don’t see it in Giger’s hieroglyphs. I was hoping you could elaborate on this?

Ian Nathan – Good question, although Giger might be the best man to explain. Not to put too finer point on it, I rather take the exterior leg-like element to be the female – the top of the triangle being the vagina so-to-speak – there is a female like quality about the hand on the bottom right. Mind you, it could all be crazy Giger stuff: I was following O’Bannon’s thoughts. I’d be fascinated to hear other people’s explanations of it. The whole pyramid idea fascinated me. I’m hoping Prometheus might possess some really weird mythology stuff like this!

AvPGalaxy – You’ve included unseen images and material from the Fox archives but was there anything of interest in there you just couldn’t fit in the book?

Ian Nathan – Not really, we nearly exhausted it! What was left was mostly variation of things we already had in there. But there are some really interesting pictures from the sequels in there!

AvPGalaxy – You mentioned in a previous interview that you would like to do more books covering the later films. How likely is this looking at the moment?

Ian Nathan – Well, the archive has the material. Like most franchises we’ll have and wait and see how this first book does. Certainly Aliens has the following, and a vastly different story to tell. The one for me, though, is Alien 3. It’s an amazing story: from Twohy to Harlin to Ward’s wooden planet to Fury 161. I really defend the working cut of the movie: while incomplete it shows that Fincher was getting close to a true sequel to the original (i.e. that provocative nature), but would people be willing to buy a book ostensibly about a failed film? And how much support Fox might give me I don’t know. I know that Fincher won’t talk – asked if he might want to edit a director’s cut of the film, he replied “but I would have to start again”. I would love to have a book for each film, put them together and you have a great pictorial/written document set to accompany the Anthology. And, you never know, perhaps we can add Prometheus to the list as well.

AvPGalaxy – In your words, why should Alien fans buy Alien Vault?

Ian Nathan – Wow, well I hope we’ve served the film well. A lot of love went into the book. I hope, above all, it simply reminds you why you love Alien so much.

AvPGalaxy – Thanks for speaking to us. Before we sign off do you have anything you’d like to say to our readers?

Ian Nathan – See you in the stalls for Prometheus. Can’t wait.

“Alien Vault: The Definitive Story of the Making of the Film” Review