Political tensions boil over on Earth, spreading to the outer fringes of known space as the UK colony of New Albion breaks with the Three World Empire. When an oil-drilling facility on nearby LV-187 is destroyed, its French colonists slaughtered, the British are blamed. Military forces arrive from the Independent Core Systems and combat erupts.

Trapped in the middle are Cher Hunt and Chad Mclaren. Cher is trying to find out who was responsible for the death of her sister, Shy Hunt (of McAllen Integrations from Alien: Into Charybdis). At the same time Mclaren, accompanied by the synthetic known as Davis, follows in the footsteps of his late wife, Amanda Ripley, seeking to stop the weaponization of Xenomorphs. When a horde of the deadly aliens overwhelms both groups, however, their only hope may lie with Royal Marine Corps unit known as “God’s Hammer.”

In April of 2022 Titan Books released Alien: Colony War. Written by David Barnett, Colony War is a continuation of the story established in Alex White’s Alien: The Cold Forge and Alien: Into Charybdis and also begins to tie into the events of Free League’s Alien: The Roleplaying Game.

Author David Barnett has previously written for the Alien franchise, with the short Hotel Mariposa in the recent anthology Aliens vs. Predators: Ultimate Prey. In Hotel Mariposa Barnett crafted a wonderful narrative that merged the tropes of a classic horror story into the science-fiction realm of Alien and Predator, along with a new and interesting take on how mental health was handled in Predator culture.

But like many of the shorts within Ultimate Prey, the Aliens did get short-changed. However, it was still my favourite short in the anthology and I had confidence going into Alien: Colony War that David Barnett would capture my interest. However, to paraphrase Dr. Elizabeth Shaw, I was wrong. I was so wrong.

Alien: Colony War is easily my least favourite Alien novel that Titan Books has released in their 5 years publishing Alien books. We’ve had some ups and downs, with the game related tie-ins disappointing me, but we’ve also seen some of the best fiction Alien has to offer with the aforementioned novels from Alex White, as well as Aliens: Phalanx from Scott Sigler.

However, Alien: Colony War managed to let me down and frustrate me far more than any of the other books – and you all remember how much Aliens: Infiltrator’s Timothy Hoenikker infuriated me – and I have some things to say on it.

Before I work myself into a fervour by talking about where I think Alien: Colony War failed, I do have to shine a light on where I think David Barnett really excelled. There is some phenomenal descriptive imagery in terms of how the Aliens are depicted in this book. I wish more authors would actually describe the Alien with the same Hell-bound reverence that David Barnett does. 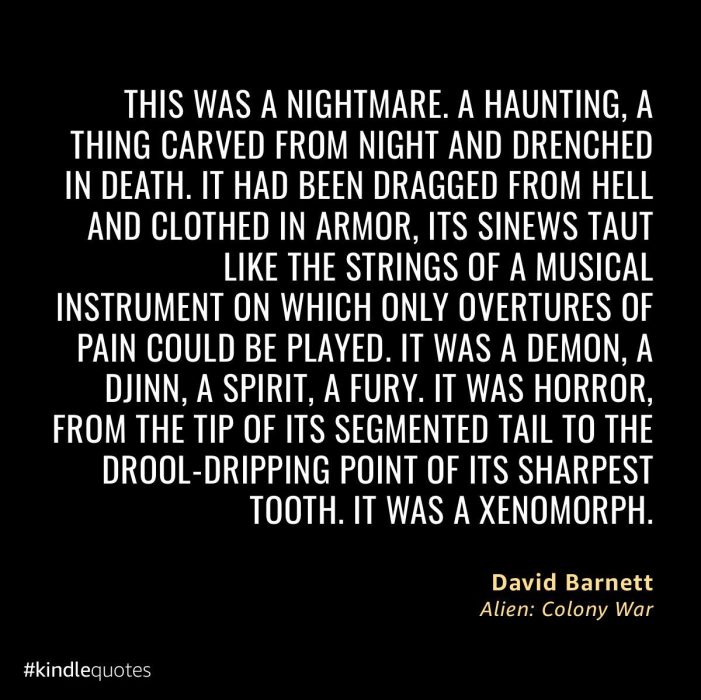 But that is unfortunately where my fondness for Alien: Colony War ends. I think my biggest problem comes from the fact that the majority of the novel’s page count is just parody. It is Titan’s Alien: Resurrection. And it feels as if it’s Barnett attempting to keep himself entertained while writing, hitting the bullet points of the checklist that Titan handed him.

I nearly threw the book at the wall when I came to a squad of elite British Royal Commandos, all named after the firefighters from the 1960s British show Trumpton, complete with both Pughs. What.An.Absolute.Joke.

Alien: Colony War feels like a cynical tie-in novel where the author is trying to accomplish specific plot elements that have been asked of him, all the while infusing it with some “humor” so he didn’t get bored while working on it.

This is primarily seen in the Colony War’s allegory to Brexit. Actually, calling it an allegory is too kind. The influence isn’t veiled in the slightest. My dislike has nothing to do with the inclusion of events mirroring current events – science-fiction has and always will be the place for social commentary – but in how it’s handled. Once again, I refer to the word parody. Barnett’s disdain for the Leave voters is so obvious in the way the topic is handled in Colony War, right down the caricature of Boris Johnson as the Prime Minister of the Three World Empire colony New Albion.

The majority of the colonist are painted as caricatures of raging racist leave voters. There is absolutely no nuance or subtly in the way secession is handled in this book. There is no exploration of the benefits or detractions of the idea of secession. It’s just everyone who wanted to was a clown. Even the reference to Brexit in the story is groan inducing, with the event in the novel referred to as 3WExit.

At least Brexit is a play on words that mildly works. 3WExit just dates the novel in the way that the colonialism commentary in War of the Worlds doesn’t. And I say this as someone who quite clearly sat on the same side of that decision as David Barnett did. Not only was it a ridiculous distraction, but it was an absolute waste of the Three World Empire’s introduction into the novel universe. 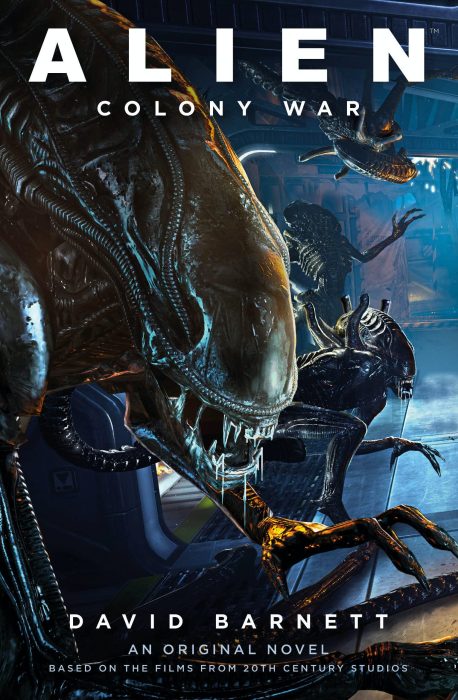 Aliens: Colony War is Titan’s first novel where it’s trying to connect to a wider story going on alongside Free League’s Alien: The Roleplaying Game. I love this idea! I adore a franchise that tries to keep everything connected and relevant to each other. It was something I missed in the earlier comics and novels, because outside of the first 4 stories the expanded universe remained largely standalone.

So to see Titan and Free League try to connect is something I’m all for, especially with the inclusion of short scenarios for the RPG in the back of the book. I’ve not had the opportunity to play it yet (and as a player, I wont read it to spoil it) so I can’t comment on it, but I think it’s a fantastic idea to try to capture a new audience, to get the readers interested in the RPG.

And to that end, I think it’s a terrible idea to not build into that connection better. Instead, we get random peppering’s of events from the RPG’s last Operations Manual that mean nothing to readers of the novel who haven’t already played or read the Ops Manual. I’m a huge fan of both Alien and the RPG, and even I haven’t gotten around to reading the Colonial Marines Operation Manual so I was a little lost with these events forming a huge backdrop of what is going on in the early parts of the novel that received only random and off-handed mentions.

There were several broadcasts early on that I felt would have made a nice platform to explain it a little better without spoiling the events of the RPG scenario. One of the book’s main characters was a journalist so there was a perfect delivery system there that would have felt organic. I understand some of the intent of the partnership between Titan and Free League is to get people who read the novels but haven’t played the game to get interest. I think getting them lost in the book is a bad marketing move. 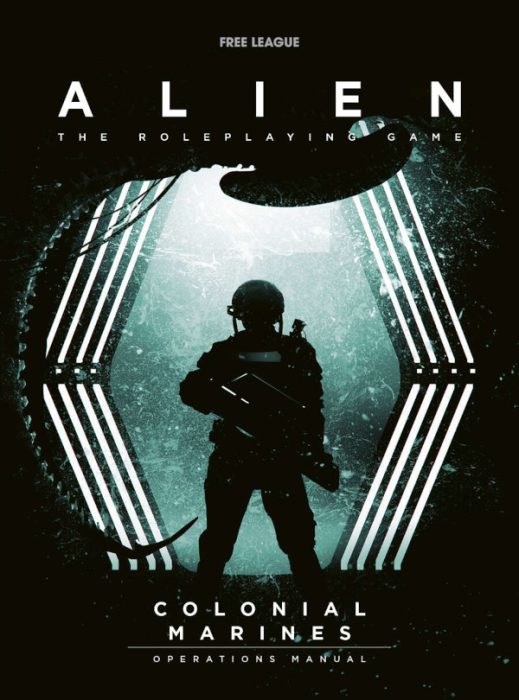 Speaking of how Alien: Colony War handles random drop in’s like that, I really didn’t like how we were introduced to Chad McClaren. Fans will know the name from the Special Edition of Aliens, of course, but the way Barnett handles Chad’s actual introduction into lore makes it feel like I should have known all about him before. Like I was missing a previous novel or comic. We do get more backstory as we progress, but just that introduction is so jarring and poorly handled.

While there were glimmers of something in Chad, I also didn’t find him particularly engaging as a character. His motivations are no different to Amanda Ripley or Zula Hendricks, to the point he feels like a clone, and the only interesting elements in Aliens: Colony War came around what he knew about the fates of both of them. And ho boy. That retcon.

Spoiler (click to show/hide)
Amanda Ripley is still alive! Still dying from cancer, but in cryo-sleep somewhere riding it out while Chad searches for a cure. I rolled my eyes at this too. Let Ripley’s die! There’s too much reliance on that name. We’re far past the point of her inclusion in Alien: Isolation hitting fantastic emotional beats, to the point where her inclusion is meaningless.

And there was something potentially interesting in that angle. Chad was a scientist. I would love to see him take a darker turn of actually pursuing the Aliens to meet those ends. We just don’t see enough of the expanded universe exploring those other aspects of the Alien, and when we do we get some fantastic results! Alex White’s Into Charybdis is a case in point right there. There’s something there with Chad, but it’s not here in Colony War.

There’s lot more I could say about Cher Hunt, or the decisions made with Davis too, or the rat Alien, or the random Queen mind-controlling (though I like the concept, but it’s not led into it properly, like a lot of little elements in the book) but I’m starting to get genuinely exhausted with just putting my dislike of this book into words so I’ll start to wrap up.

Before I do I just have to mention Colony War’s Pulse Rifles. With the novel’s intentions to tie into the wider world-building I was disappointed to see all of New Albion’s forces using Pulse Rifles. We eventually saw some Weyland-Yutani weaponry show up in the hands of the Trumpton Firefighters, but it would have been better world-building had we seen more weaponry that we’re now starting to see associated with the 3WE in Aliens: Fireteam Elite and the RPG instead of the typical Pulse Rifles everywhere.

And the Pulse Rifles! What an absolute foul-up. It seemed like David Barnett had forgotten to re-watch Aliens prior to starting work on Aliens: Colony War. Throughout this novel the Pulse Rifles are referred to as firing “pulse blasts” and running off batteries. It brought to mind this quote from Larry Correia’s excellent Episode 22 in Aliens: Bug Hunt. 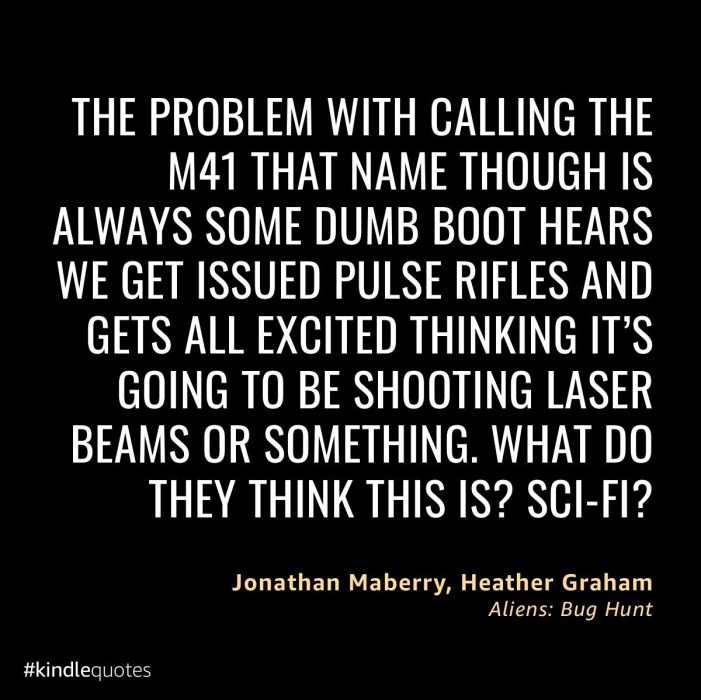 I can’t bring myself to dig any further into the issues I have with Aliens: Colony War. It’s just not enjoyable. It’s not a worthwhile piece of the Aliens expanded universe and it is quite easily the worse thing that Titan has published for Alien.