A group of wildcat planetary prospectors plant their flag on a distant new world, rich in land, resources… and mystery. Within this seemingly uninhabited planet lies the greatest archaeological discovery in history, an ancient, abandoned complex of impossible proportions carved deep within the living rock, a mind-numbing labyrinth of passages, ramps, bridges, and galleries that seems to extend limitlessly. But as the exploration of the leviathan dead city proceeds deeper and deeper, the members of the team slowly begin to lose their grip on reality. But madness gives way to fear as the explorers begin to disappear one by one. Something else lives within the necropolis, a faceless horror as deadly and merciless as space itself, a lethal terror that has waited centuries to awake… and destroy.

The first Aliens comic series to hit the shelves since Xenogenesis in 1999 was simply titled Aliens during the serial release. Less is more after all. Penned by Aliens veteran John Arcudi who has Genocide, Stronghold and Alchemy under his belt, is Aliens the grand return that we have been waiting for?

The great thing about Aliens is that Arcudi isn’t retreading old ground. He hasn’t gone back over the previous comics and tried to emulate them, this is not Jim Cameron’s Aliens redux. Aliens is a character story. It is that simple. For all the mysteries that his series puts out there, at its core is a story of David Sereda’s drive to rescue Andrea.

Sereda is an interesting main character in that his motivation may not be genuine. You see he’s not actually human which was revealed during the bombshell cliffhanger of the first issue. He’s a synthetic that is severely messed up. As the series continues, Sereda grows more human – or is that his programming continues to degrade? That’s the big question regarding Sereda. What exactly is going on inside that head?

The prevailing storyline is this mysterious canyon. It has a hypnotic effect on the colonists and causes them to do some unimaginable things. It’s almost a narcotic for them as well. They’re drawn to this canyon, to the “blessings” that the city offers them. Moreover it is left very much open ended at the series’ conclusion – especially with Red and his final appearance. Given Editor Chris Warner’s comments and the unknown fate of Red, we might be looking at the seeds of a future series.

This leads me onto something else that I’m really pleased about, continuity between the stories again! The Alien franchise was always been one about connectivity, picking up characters and stories elements from the previous entry and expanding. It was something I greatly missed during DH Press’ recent line of Alien novels. I appreciate the need for the series’ to be accessible to new readers but that’s what exposition is for.

Given that the new Alien design is something important, alluded to by Sereda in Aliens and the Aliens in the upcoming AvP – Three World War are this new design and is to be explained in the series looks like we might be seeing more of that trademark continuity. As well as that, there is also the matter of some of the characters surviving and the open plot points with the canyon. It looks promising for the future.

The early comics are also very hit-and-miss with their art, which is somewhat of a disaster given that comics are a visual medium. However the incredible talents of Zach Howard, Mark Irwin and Raymond Swanland make Aliens a hit. It certainly stands out amongst the crowd.

Swanland in particular provides some stellar covers. Chris Warner knows he’s onto a winner with Swanland, what with him doing all the covers for the Predator series and Three World War. I imagine we’ll continue seeing his talents.

Howard and Irwin provide the amazing interiors. They both compliment each other so well and have creating this modern yet very suitable look. The use of red-tones during the first issue and the moody shadows in the rest of the series are brilliant. Most importantly is this updated look. Dark Horse’s previous attempt with Xenogenesis gave us some very clichéd and cheesy retro-designs that really defied the purpose of updating the style. Irwin and Howard don’t fall into any of those pitfalls and provide a style that suits the franchise. 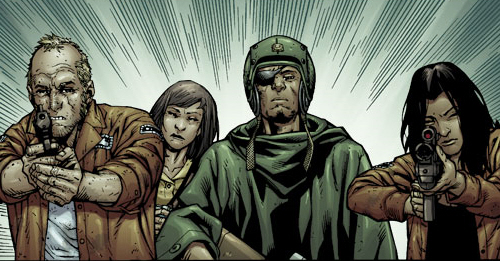 Over all I think the reboot effort has turned out incredibly well. The style and feel of the series is modern yet suitable. It doesn’t feel out of place and it’s definitely one of the best looking Alien comics. The story is another bonus in that it doesn’t use overplayed aspects of the franchise and sticks to a narrow character story. While reading the series it does feel like it needs to be bigger, however. There was always the question of how are they going to resolve this in my mind and it does feel like the ending is somewhat of a cop out without much fallout. Despite those criticisms, this is the start of something good.

All four issues and the Free Comic Book Day preview are going to be printed as a trade back publication, which is due for release April 14th under the title More Than Human (reference to Sereda maybe). I recommend picking up. If the rest of the series continue to this standard, I shall be more than happy. From Corporal Hicks @ AvPGalaxy I award Aliens (More Than Human) a 4 out of 5.