A luxury spaceship is attacked by Predators! In short order, the passengers and crew are reduced to two survivors: the teenage Maria and her younger “brother” Tyler – a synthetic companion she views now as a burden.

Maria and Tyler scramble to hide from the Predators, and feel they might have a chance when an Alien is thrown into the mix… until the creature targets them as well! It’s a harrowing battle for survival that hinges on the bravery of the little android and raises the question of when does love and compassion trump programming?

The first issue was released on December 11th 2019, with the second following on January 15th 2020. Then COVID-19 hit and the printers shut down. And then Disney pulled the license from Dark Horse, giving it to Marvel, which left Dark Horse until the 31st of December to deal with their unreleased or unfinished Alien and Predator series.

While the single collectors never got the third and fourth issue, we were fortunate enough that Dark Horse managed to put out a trade paperback of Thicker Than Blood, meaning that we were still able to experience the completed story.

The series was written by Jeremy Barlow, a writer perhaps better known for his work within the Star Wars series. Though he would also go on to write Predator: The Original Screenplay – which unfortunately became a victim of all the circumstances above – Thicker Than Blood was actually his first entry into the Alien and Predator expanded universe. And what an entry it was! As always, beware some spoilers. 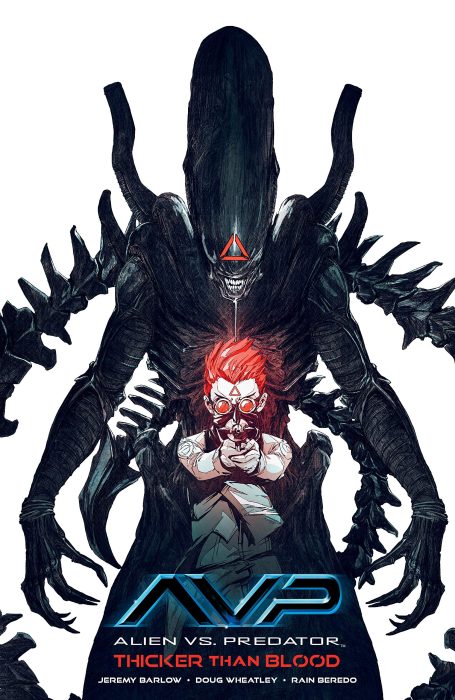 Jeremy Barlow did something with Thicker Than Blood that I absolutely love. He surprised me! I love nothing more than when a story takes tropes and flips them on their heads, or just straight up goes in the opposite direction. It still has to actually be good and satisfy me though. And Jeremy absolutely delivered on that.

Straight off the bat Thicker Than Blood turns things around. We aren’t dealing with a simple hunt where Predators are after Aliens and humans bumble their way in. Instead we’re dealing with a territorial conflict, where the Predators are not hunting for pleasure, but in response to the human ship entering their space.

Gone are the typical rules of engagement that we expect Predators to follow. Que absolutely brutal panels of Predators just ripping everyone to shreds. We don’t get to see enough of the Predator’s acting outside of a typical hunt so I was really excited to see this angle introduced in the comic.

The Alien’s involvement in the story comes through the accidental intervention of the series’ main characters, Maria and Tyler Ward. With their way to the ship’s escape shuttle blocked by the Predator’s own ship, they sneak their way aboard and attempt to remove the Predator’s boarding ladder. In a panic they accidentally release the solitary Alien that was being kept aboard the ship.

The way that Jeremy portrayed the Alien in Thicker Than Blood was an absolute breath of fresh air. While I am a huge fan of the expanded universe, it does get somewhat tiring seeing the Aliens constantly being mowed down by Colonial Marines or Predators. That didn’t interest Jeremy.

Instead what we get is something more akin to Big Chap from Alien or Stompy from Alien: Isolation. We get a totally competent Alien. An Alien that takes down two of the three Predators featured in the story. As an Alien fan, it was an absolute pleasure to see an Alien actually being worthy of the Ultimate Prey status that the Predators are supposed to consider it. That’s a sensation you very rarely get. 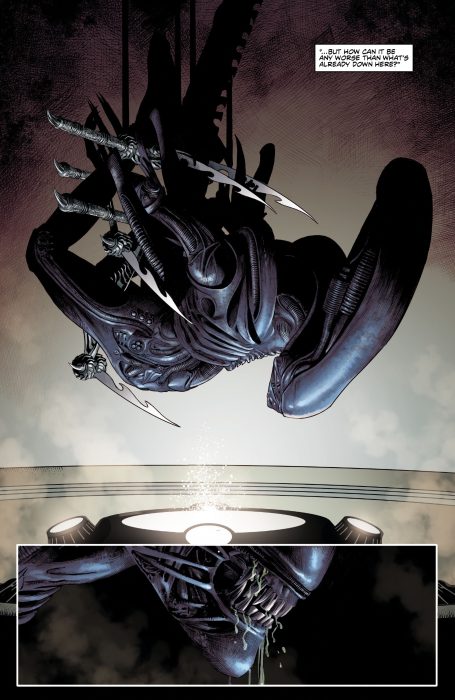 Thicker Than Blood’s main Predator, Hook as he was nicknamed by the writer, is an absolute beast as well. Not many Predator’s get put through the ringer like Hook does and still come out on top. He loses a leg and an arm to an elevator and has one of his fellow Predator’s burns away the stumps and cauterizes them! He is subjected to torture at the hands of the main characters. And after all of that, he is up and around, battling the Alien and just not giving up! I can’t say any other Predator really jumps out at me as having taken that kind of damage and still going and kicking ass! Hook has to be one of the most badass Predators I’ve seen.

I also really enjoyed Thicker Than Blood’s main character, Maria and Tyler. Tyler is the kind of character I will always find fascinating and be able to identify with in some ways. He’s an eternal child – in theory. He was programmed to be a child, the companion to another child, and as long as he is maintained, he will forever be a child. As a perpetual 18 year old in my head, that’s something I can always connect to, and love to read how different people approach the concept.

For Thicker Than Blood, Jeremy takes the approach that Tyler isn’t truly immortal because he is degrading. As his sister outgrows him, his “parents” (aka his owners) find other uses for him and this causes degradation that they can’t afford to, or aren’t willing to, fix. And when that information comes to light it causes a more noticeable shift in the sibling dynamics.

I found Maria to be entertaining to stick with too. When the series starts off she’s not particularly likable but as the comic continues and things unfold, she has a nice arc that was particularly relatable. Those of us out their with siblings know all too well what it can be like when you just can’t relate to the other.

I was also a big fan of the way Jeremey built his world. This is one of those examples of a series where I can feel so much more going on in the world than just what’s being presented in the narrative as it unfolds.

The exchange between Maria and Tyler’s parents after their reunion is a perfect example of this. “I’m not trading my daughter’s life for yours.” Combine that with Doug’s wonderfully expressive art and it says so damn much. There’s so much more going on in this world behind the story and it only serves to enrich it.

Then let’s add Rain Beredo into that mix, who previously did the colouring for Aliens: Dust to Dust, another series I’m visually enamoured with and you’ve got a very excited Hicks here. Neither Doug or Rain disappointed. Thicker Than Blood was yet another knock-out series when it came to the visuals.

I loved Doug’s use of the original Big Chap and Alien: Isolation’s Stompy as reference for Thicker Than Blood. Given the portrayal of the Alien in this series it just fit right in and only exemplified that feeling of the Alien being a deadly force. And I can’t forget the fact that Doug also included the skull within his rendition of the Alien. Major points from me for that one! #TeamSkull

Doug’s Predators were brilliant too. Hooks leans a little closely into Paul Anderson’s AvP side of the design, but without the bulky look that the shorter stunt performers gave that film, and I think it works genuinely well – oversized wrist-blades and all.

Injured Predators are always something that brings a smile to my face. It goes back to that world-building, and it sets the imagination going. So to come into the story to see one of the Predators already injured was something I thought was a great touch.

One particular thing that Doug does that just needs pointing out is how phenomenal his human expressions are. I’m not sure I’ve come across many other Alien series where the humans look as good as Doug’s do.

Rain is someone whose work I really enjoy because I think he brings a really amazing texturing to his colours that make sure the pages never feel dull. He complimented Doug’s detailing extremely well and just added that final touch that brought the comic to life visually. I think that Thicker Than Blood is easily one of the best looking Alien or Predator comics. 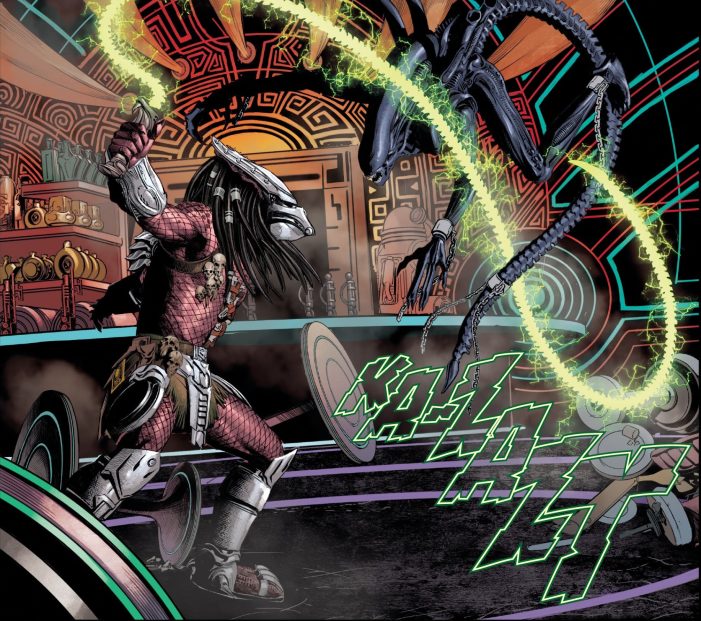 If I had to complain about one thing, it’s that it would have been nice to have seen the full fight between the Alien and whip-wielding Predator – Splitter. It certainly doesn’t detract from the comic in any way for me, but just imagine a creatively dealt with fight with more interesting whip choreography from Doug Wheatley…it feels like we missed out a little bit.

Something that was brought up when we discussed the series on the podcast was how it might have been nice if Lieutenant Danvers had been removed from the story, and the page space instead been devoted to some of the fascinating backstory that Jeremy Barlow had for the Predators but hadn’t been able to have fit in.

For those who haven’t listened to our interview with Jeremy yet, he revealed that the group of Predators had actually been a family unit. The surviving Predator was their father, and the others his two sons. They would have been a family of screw-ups and the father was taking them out on their very first hunt of an Alien when they came across the human ship.

While I don’t believe Thicker Than Blood suffered for not having it, it would have certainly strengthened the thematic elements of family that was already being portrayed thanks to Maria and Tyler.

Thicker Than Blood is easily one of my favourite Alien vs. Predator series. It’s up there with the original and Eternal as far as I’m concerned. For those looking for a story that does something different, with relatable characters and quite frankly stunning artwork, there’s no need to look any further.