Shy Hunt and the tech team from McAllen Integrations thought they d have an easy job set up environmental systems for the brand new Hasanova Data Solutions colony, built on the abandoned ruins of a complex known as Charybdis. There are just two problems: the colony belongs to the Iranian state, so diplomacy is strained at best, and the complex is located above a series of hidden caves that contain deadly secrets. When a bizarre ship lands on a nearby island, one of the workers is attacked by a taloned creature, and trust evaporates between the Iranians and Americans. The McAllen Integrations crew are imprisoned, accused as spies, but manage to send out a distress signal to the Colonial Marines.

And as I flipped those last pages, and had the immediate desire to turn the book over and start again from the beginning right that very moment, what I found in my hands was not only one of Titan’s best Alien novels, but one of the very best entries in Alien lore. A deep and rich world with complex and real characters. A story that relished in hitting those familiar story beats, and then just flipping them right on their heads.

What Alex White got from me was someone who begged for their return at the end of my Cold Forge review, someone who followed them onto their other novels (seriously, go pick up Alex’s Salvager trilogy), and just an all-around fan.

So imagine my sheer delight at finding out that Alex would be penning another Alien novel…I was pretty damn excited. But with the expectation that Alex had built themselves from delivering Alien: The Cold Forge, was it possible to even come close to meeting that kind of experience again? 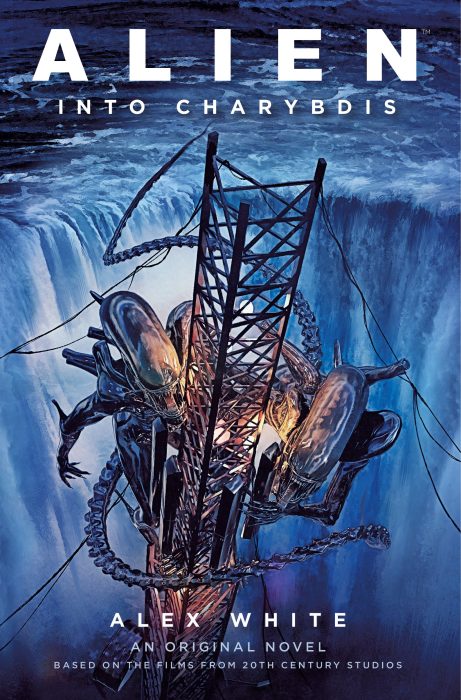 I’ll avoid trying to get too far into spoiler territory, or blank out some of the more significant spoilers, but beware I’ll be talking about details from the book.

Now cards on the table before we go any further. I did have the honor of reading the very first draft of this as it was being written, where I would offer comments and suggestions. It was a massively unique experience. For the assistance I had a character named after me and a thank you in the back.

But my excitement as I watched this narrative unfold in such an unusual way was no less than when I first turned the pages on Alien: The Cold Forge. I knew as I read that first draft, and waited eagerly to have an actual book in my hands with the final draft, that Alex was onto yet another winner. Lightning could strike twice. One facehugger could deliver two payloads.

In many ways it felt like Alien: Into Charybdis was being written for me. Alex did exactly what they did with Alien: The Cold Forge and took some of those familiar elements of the Alien universe, blind-folded them, turned them around, and put a couple of 24mm caseload rounds into the back of their heads.

More specifically this relates to the Colonial Marine’s involvement in the novel. My online alias is Corporal Hicks. I have an airsoft Pulse Rifle that I had upgraded, so I could actually take her out and use. I fucking love the Colonial Marines. They are the Ultimate Badasses. They are the heroes of the Alien universe. It’s the corporate scumbags who are the bad guys, right?

Despite not actually appearing until around a third of the way through the book, Alex White’s Colonial Marines serve as both some of Alien: Into Charybdis’ protagonists and antagonists. They serve as yet another reminder that the world isn’t so black and white. It is grey. They’re not infallible heroes. No-one truly is. And I love it. 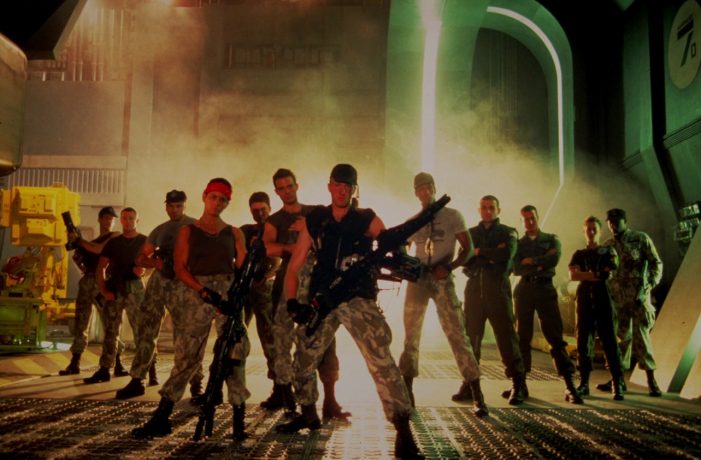 It’s a nice reflection of some recent reminders in the real-world that holding a position of authority doesn’t equate to being good, or in the right. It’s that added element of realism that I find so engrossing when it comes to Alex’s world-building.

And Alex just delights in writing the worst that humanity has to offer. Alex White hates the people that Captain Kylie Duncan is inspired by. But you can tell they enjoyed writing this character as much as they did Alien: The Cold Forge’s Dorian Sudler. That’s not to say the two are comparable – it’s that tired cliché I gave you all earlier about the Aliens to Alien: The Cold Forge’s Alien. They’re entirely different beasts. Sudler and Duncan are entirely different assholes.

But just like Sudler, I loved to hate Duncan. One of the ways that I found Alex would make Duncan particularly interesting was when we get inside her head. It’s clear as day to her, she’s not the villain. And I just love that. There’s an old adage about no-one is the villain of their own story, and to read Duncan rationalize the way she acts was just so fascinating.

While everyone may be shades of grey within the actual novel, no-one considers themselves the bad guys. And I just love it. And it’s not just Kylie. We get short interludes with the boss of one of our main characters, who so far we’d only been seeing through the eyes of the employee who really didn’t like him, and it becomes possible to feel sympathy for this character who we’d only been seeing through a different lenses up to that point.

There is a lot of complexity going on with the characters in this book, and it’s just one of those extra layers of realism that really pulls me into the world. One of the characters is a sweet little old lady, helping fight some of the sexist attitude of one of the other crew. But she’s a low-key racist too. Nothing is ever straight forward. And another way that Alex really gets me onboard this world they’re building, is that even if characters might not be straight-forward likeable, they’re interesting, and that keeps me invested in everyone.

Despite talking about a return to the familiar with the Colonial marines, there’s also a lot of unique going off in Alien: Into Charybdis too. It’s not the familiar setting of a research station or a doomed colony world, but instead a giant server farm and a data canon, or as the characters in the book put it – a galactic webhost. It’s an entirely unique setting within the Alien universe.

And Alex takes is a step further away from the usual, and the facility is actually owned by the Iranian State that has seceded and joined the Independent Core System Colonies. This all places a huge part in the galactic politive landscape. Alien: Into Charybdis puts a lot of effort into expanding outside of the usual elements of the Alien universe, while also weaving them into this larger human intergalactic narrative.

World-building is something that I think Alex White excels at. Whether it’s the larger scale implications that the book ends on, or those tiny little nuggets that are dropped among the action and sets the imagination alight. But even better, they somehow manage to drop these tasty morsels and then swiftly move along and it not be to the detriment of the story.

I will always have an appreciation for Alien (and Predator) stories that surprise me. Where I’m unable to predict the next big cliffhanger. Alien: Into Charybdis delivered on that big time too.  Whether it was the realisation that Alex White had dug deep and pulled out the never-named on-screen scientist from the end of Alien 3, revisiting H.R Giger’s Alien 3 designs, a surprising death, or the realisation that the book was actually a sequel to Alien: Alien: The Cold Forge. So many times I would end a chapter just muttering “oh, damn” to myself. 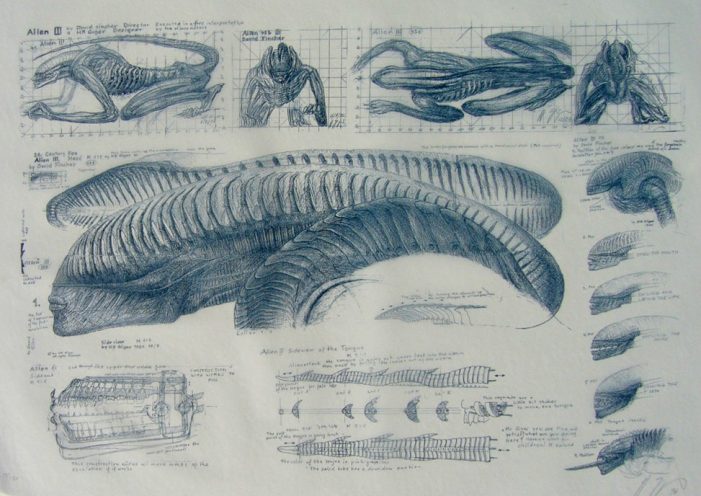 And Blue! Holy crap did I not see that one coming. When I realised that Alex was describing H.R Giger’s early Alien 3 designs, I never thought that it’d turn out to be a plagarious praepotens mutated Blue Marsalis! At that point I was just excited by the deep lore digging that Alex seemed to be doing. I just didn’t see it coming! But even better, it was something I’d always wanted to see in my Alien.

I’ve always thought that some kind of Li or Sil creature would fit right at home within the series, especially after the prequels introduced the black goo and the Fire and Stone comics experimented with Elden. It just felt right to me. I mentioned earlier that it felt like Alien: Into Charybdis was being written for me. This is another one of those elements that made me feel like that, and would cause me to grin as I flipped those pages.

There’s so many things I would love to talk about with this book. So many things I could pick on just tell you how much I was thrilled by this element, and then that plot point, or that character interaction. But we’d be going on forever and you might as well not even read the book yourself so I’ll cut myself short.

Before I do end though, I do need to pick on one element I was disappointed with. One of the things in Alien: The Cold Forge I really loved was how Alex’s Aliens would actually kidnap people to bring back to the hive. And while Alien: Into Charybdis’ Aliens had a hive full of grotesque biological gargoyles, they were a little more blood-thirsty than I would have liked.

There’s one particular section in the book where the Aliens are unleashed on a room full of unarmed colonists and the Aliens just go to town on them. I’m talking Alien 3 exploding someone by running into them. I would have liked to have seen the Aliens breaking legs and maiming, leaving colonists alive to take to the hive but still being brutal. It was something that I thought Alex had done well in Alien: The Cold Forge with arms and legs being broken or removed to prevent escape, and I missed in this novel.

But it was by no means a deal-breaker for me. There was nothing in the book that ruined the reading experience for me. I just couldn’t wait to keep reading. 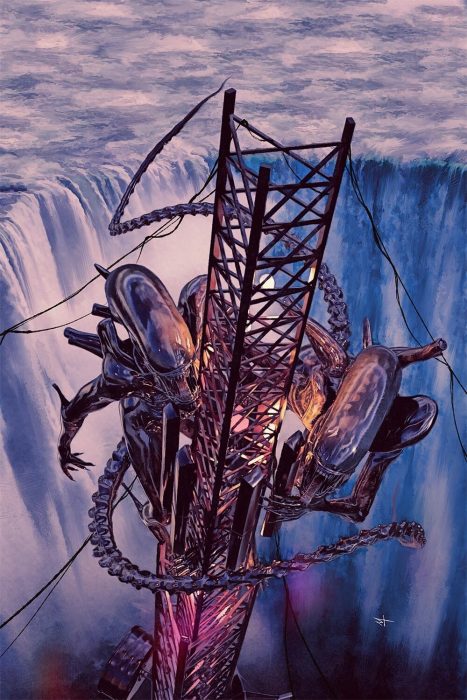 It also needs to be pointed out that Titan really stepped up their cover art game with Alien: Into Charybdis. I know I’ve not been alone in complaining about the quality of their cover art, so to actually see Marco Turini’s sweet original artwork on the cover was an absolute treat. Please keep it up, Titan!

Alien: Into Charybdis was a book that came about because the fans made it so. It was our reaction to Alien: The Cold Forge, and the persistence of fans on social media (spearheaded by Aliens Gateway Station in particular) that made this a reality. Alex White’s return was something I begged for at the end of my review of Alien: The Cold Forge. And I’m so thankful that Titan listened to us.

So when all is said and done and I finished those last words of Alien: Alien: Into Charybdis, was it worth all the fervour to make this happen? You’re damn right it was! Alien: Into Charybdis is another home-run from an author that just gets the Alien universe, and has an absolute blast writing for it, so much so that it felt like it was being written specifically for me.

I cannot recommend this book enough. It is yet again another perfect Alien novel for me and if your taste aligns with mine in even the slightest, if you don’t go pick this novel up, you’re depriving yourself of an absolute gem.