“With the failure of Hadley’s Hope, Weyland-Yutani has suffered a devastating setback–the loss of the Aliens they aggressively sought to exploit. Yet there’s a reason the Company has risen to the top of the food chain. True to form, they have a redundancy already in place… the facility known as The Cold Forge.

Remote station RB-232 has become their greatest asset in weaponizing the Xenomorphs. However, when Dorian Sudler is sent to RB-232 to assess their progress, he discovers that there’s a spy aboard–someone who doesn’t necessarily act in the company’s best interests. For Dorian, this is the most unforgivable of sins. When found, the perpetrator will be eliminated with extreme prejudice. If unmasked, though, this person may be forced to destroy the entire station… and everyone on board. That is, if the Xenomorphs don’t do the job first…”

Alien: The Cold Forge is Titan’s first original full length Alien novel since Tim Lebbon wrapped up his awesome Rage War trilogy in 2016. After that we had a single disappointing anthology series with Aliens: Bug Hunt which released on Alien Day 2017.

And now Titan are back and they’re swinging hard with Alex White’s Alien: The Cold Forge. Though no stranger to science-fiction, White is a new name to Alien literature and he’s one I want back after having read his debut entry into the Alien universe.

The novel takes place almost entirely on a spacestation known as The Cold Forge (they make weapons, but without the heat!) where Dr Blue Marsalis is experimenting on the Aliens, ostensibly to weaponize them for Weyland-Yutani, and her work is interrupted when a W-Y representative shows up to get in the way. And, of course, the Aliens escape and it all goes to hell.

I’ll forgive you for thinking this sounds like Rogue, Labryinth or Stronghold. When you break it down into its constituent story beats like that Alien: The Cold Forge sounds like any number of old Alien stories. You couldn’t be more wrong though.

Alien: The Cold Forge might include all the typical tropes of an Alien story but Alex White just turns them all on their head. All of them. The Cold Forge is simply the most original and gripping Alien novel I’ve had the pleasure of reading for a long time. 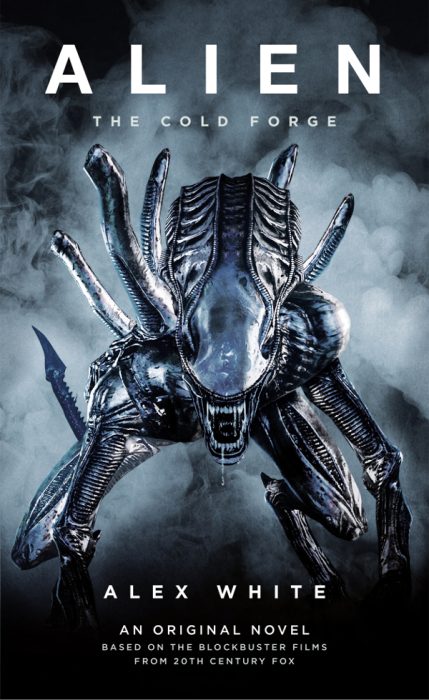 The novel starts by introducing us to Dorian Sudler, an auditor within Weyland-Yutani whose job it is to go to under-performing facilities and correct that. This might include a staff reshuffle. It might include shutting the entire project down. But he will get the job done. An auditor? Doesn’t sound particularly interesting, especially for the novel’s protagonist.

Sudler is quite possibility the most engaging human adversary the Alien novels have seen since Dr Paul Church. He is an absolute bastard. Actually, bastard isn’t a strong enough word to describe Sudler but the word I’d like to use isn’t considered socially acceptable. Never have I hated an antagonist in an Alien novel as much as I did with Sudler.

And I’m most definitely supposed to hate his guts. Sudler is an absolute psychopath. Alex White has created an absolutely despicable human character in Sudler. From the very opening chapter of the book we get a look at how manipulative this man is and just how effectively he does it without the other characters knowing. The back-and-forth of hearing Sadler’s thoughts and then what he actually says out loud was a fantastic technique to really get to loathe the man.

As the novel progresses Sudler becomes seduced by the Aliens and his bastardry (that’s a word, right?) hits the next level. I just wanted him face an agonising and drawn-out death. Imagine your disdain for Joffrey from Game of Thrones and you’re there. He was just so fascinating and engaging to follow.

Which also brings us onto The Cold Forge’s protagonist – if we can call her that. Blue Marsalis is this novels mad scientist but she’s not our villain. She’s also not our hero. I couldn’t quite peg Blue.

Blue is running the Cold Forge’s Alien research under the guise of weaponizing them for Weyland-Yutani. That is not what she’s doing, though. She’s actually looking into the medical potential of the Aliens which sounds pretty heroic. However, it’s in her desperate attempts to cure her own illness and save her life.

I couldn’t decide if she sat on the side of helping everyone or being so desperate to help herself that she was completely selfish. What I did know was that I was so utterly interested in her. Blue suffers from Bishara’s Syndrome, a rare degenerative genetic disorder and she is largely confined to her bed where she is tended to by the android Marcus (more on him later).

Through a special interface Blue is able to “pilot” Marcus and he operates as her avatar around the station. The station crew find that disconcerting and a distance grows between Blue and the other humans aboard the Cold Forge for it. She doesn’t care for the other humans around her and they feel the same. In fact, as we’re introduced Sudler being a raging bastard, we’re introduced to that distance and Blue’s indifference to her fellow scientists.

Alex White continually kept me on my toes. He gave me plenty of reasons to sympathise with Blue and understand why she acted like she did, but he also injected huge amounts of arrogance and ultimately her desire to fix herself would also have huge benefits for humanity if she succeeded. There was a constant balance going on with the good and bad with Blue.

Marcus was a really interesting addition to this novel! He’s aboard the Cold Forge to serve as Blue’s nurse and as her avatar with the real world. His loyalty and care of her early on (however programmed) makes the change in the later parts of the novel even more interesting.

While piloting Marcus, Blue kills one of her fellow crew members, sparing him from a gruesome fate in the depths of the Alien hive. And Marcus remembers everything that goes on while Blue is piloting him. And that particular act by Blue does not go down well!

Add some physical and “mental” damage when Marcus is later assaulted and you have some really fascinating and unique interactions between Marcus and Blue where he is bound by his programming to try to keep her safe but at the same time is in so much conflict because she used his body to betray that programming. I just loved their interactions with each other!

White’s use of the Aliens with The Cold Forge was something I was also quite taken with. It was really refreshing to see someone actually explore their use for something other than weapons and to go into some detail with it.

Alien: The Cold Forge puts forth that the face-huggers don’t actually inject an embryo, but deliver a substance called Plagiarus Praepotens which rewrites the host’s DNA and results in the creation of the chestburster. Straight away I thought back to Prometheus and Alien: Covenant with the accelerant and Neomorphs and I had to wonder if this was a deliberate tie in to Prometheus and Alien: Covenant.

Blue’s desire is to collect this substance so that she can experiment with using it to rewrite human DNA for medical purposes. It was so refreshing to actually see Alien experimentation utilised for something other than just weapons!

All the Aliens in the novel are also birthed from chimpanzees and White is sure to note that the resulting Aliens differ from the human born ones such as the way they walk. However, after these details are given there’s no real mention of any of the hybrid qualities.

There were other small ways about the how White treated the Aliens that I also really liked. He had them make use of their tails which is something I personally feel is underutilised in the Alien expanded universe.

White also had a lot of various human characters kidnapped and taken back to a start-up hive. That’s something else that I really appreciated and don’t think is done enough. I really loved just how brutal the Aliens were about it too. There’s one particular scene where a character has their arms and feet bitten off to stop them from escaping the hive! I was having flashbacks to Aliens: Labyrinth.

The Cold Forge’s Aliens aren’t the Aliens of the old Expanded Universe. They’re not running around getting gunned down and treated like disposable insects. If anything, it feels like Alex White replayed Alien: Isolation a few times to get a sense of how he would handle his Aliens and it works really well. I especially liked a lot of his more elegant descriptions of the Aliens – especially through the eyes of Sudler as he began to idolise the creatures more and more.

One story element that is unfortunately left hanging is where these Aliens came from. Alien: The Cold Forge is set almost immediately after Aliens and Weyland-Yutani somehow has access to Alien eggs from somewhere. While it’s brought up by the characters that they don’t know where the Eggs came from, it’s a bit of lore/continuity that isn’t addressed.

While I was reading the novel I really didn’t care, though. I was too engaged with the story to be too bothered by this piece of continuity. However, it’s something that I imagine will likely be an irritant to some readers.

A small note of interest about Alien: The Cold Forge is that it is told through the present tense. I personally don’t read many novels told through this perspective so I was a little unsure at first but I eventually settled in and was gripped by the story.

There were a myriad of smaller elements in Alien: The Cold Forge that I also really loved and found quite interesting or thought-provoking. Things such as Blue having sex with another character, Anne, while piloting Marcus’ body. Anne is described as having something of a fetish for synthetics and the idea of utilising another body for intimacy just had me questioning the morals behind it. None of the characters in the novel are pure black or white either, everyone has shades of grey and it just made them feel more real.

I also really liked the way Alex White had his Alien’s contained and how he dealt with quarantine. The Cold Forge station is in close orbit of a star and they utilise the star’s radiation to hurt or kill the Aliens, keeping them in containment kennels that always face the sun. The scientists are able to open sun-shields to let in the sun’s light and radiation to burn the Aliens. I thought that was a really unique way of dealing with the Aliens. 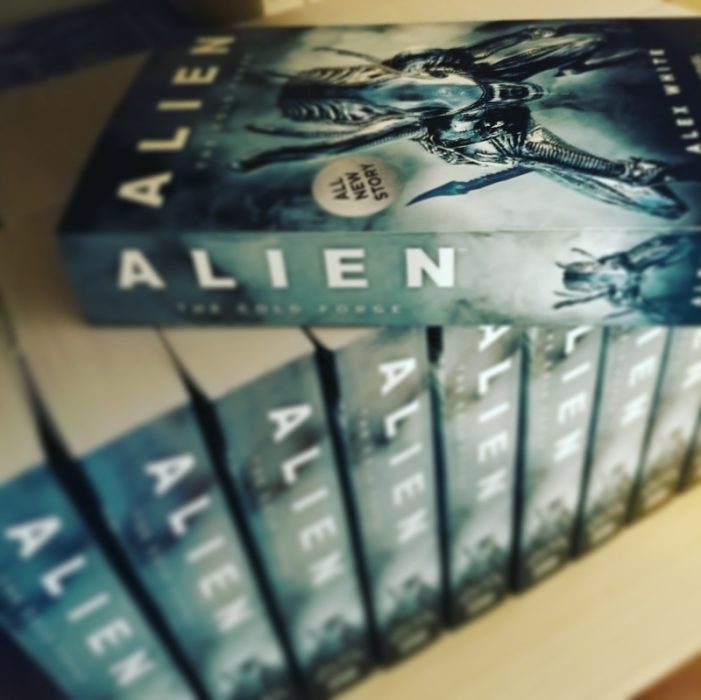 And now we’re at that point in the review where I once again complain about the cover art that Titan uses for these Alien books. The photoshop covers really don’t do these novels justice, especially The Cold Forge. This novel deserved some absolutely gorgeous and original artwork from the likes of Dave Dorman, Tristan Jones or Raymond Swanland. Please, Titan! Invest in some original cover artwork from these artists or their ilk!

Alien: The Cold Forge feels like that. It feels like such a fresh take on what can be done with the Alien series. Alex White took all the usual aspects of what has become the Alien formula and flipped them around and injected a real sense of originality into them.

Alex White needs to return to the Alien franchise. It is that simple. Whether it’s a sequel to this novel or something new, I don’t care. I just want him back. He crafted such an engaging and original Alien story. I want to see what else he has up his sleeve.