40 artists, filmmakers, illustrators and fans produce original art for a tribute to the sci-fi horror masterpiece Alien to commemorate the 40th anniversary of the film.

The Alien franchise is one that owes a lot to the incredible artists and visionaries who worked on the films that elevated the film above its “b-movie” origins into such a significant moment in cinematic history.

From the surreal and horrifyingly seductive blending of the biological and mechanical style of H.R Giger that created such an iconic creature, to the real-world and functional mentality of Ron Cobb that helped set the realistic tone of the Nostromo, to Sir Ridley Scott who took his sketches on paper to gorgeously shot sequences on celluloid, Alien is a film with a rich artistic pedigree. And that’s to only name a few!

What better way to celebrate 40 years of such a legacy than with an art book where 40 different artists create unique pieces that express how Alien inspired or impacted them.

Despite the massive artistic legacy of Alien, we’ve never really had many artbooks. Sure, there’s been some Art and Making Ofs, but in terms of just books showing off original artwork, we’ve only really had Dark Horse’s Aliens/Predator: Panel to Panel, and that was primarily sourced from their existing (but still fantastic) backlog of artwork for their various comic series.

UDON Publishing had announced Alien Visions back in 2016, but ultimately that book would not come to be. And after several release dates being pushed back, it was starting to became a worry that might have been the case with 40 Years 40 Artists too. But I have a copy in my hands, and copies have been making their way onto shelves in the UK. It’s here! 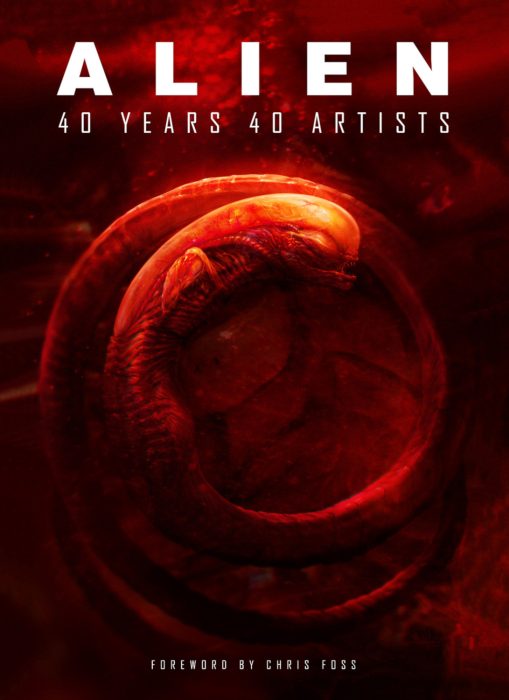 Presentation-wise, Alien: 40 Years 40 Artists is gorgeous! It’s a huge hard-back, one of Titan’s bigger formats, with a very lovely quality paper. This one might be a struggle to fit on some shelves, but given Dane Hallet’s phenomenal cover art, this is one that I can I completely understand being defined as coffee table book.

That rich artistic legacy that I keep referring to with Alien? In what I consider to be a fantastic editorial choice by Titan, after absorbing yet another example of why Dane Hallet is one of Alien’s best artists, another one of those very talented artists who helped conceive the original Alien – Chris Foss – kicks off Alien: 40 Years 40 Artists with an honest and frank foreword recollecting his experience working on Alien.

Looking through the content page, I must admit I was a little disappointed not to see more names who already had a history with the Alien series. It was probably just me being a philistine, but I just didn’t recognize the majority of the artists in the book. Even forgetting the likes of Den Beauvais, Killian Plunket, Mike Mignola or Raymond Swanland who I would have loved to have seen here, it seemed like a huge missed opportunity to get Walt Simonson given his involvement in the comic adaptation of Alien!

But that’s not to say I was disappointed by the names I did recognize! 40 Years 40 Artists boasts the inclusion of some of Alien’s finest. Dane Hallett and Matt Hatton, two standout artists who worked on Alien: Covenant as David’s literal hands charting his visual descent into robotic madness.

They return in 40 Years 40 Artists with some more stunning pieces. In addition to the cover art, Dane also has an alternate poster for Alien on the very first page and a stunningly rendered piece that echoes back to David with inspiration from Michelangelo’s “Touch of God”. 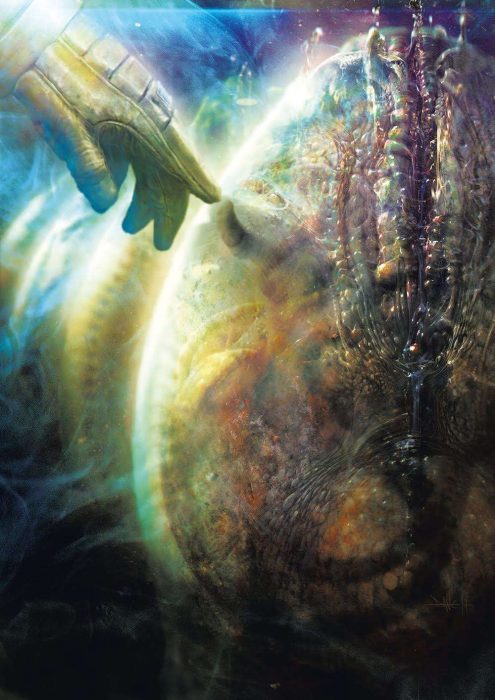 Matt has gone big on the Giger influence, doing an absolutely gorgeous front and back profile of an adolescent Alien that even gave me echoes of John Bolton’s cover art for the third issue of Aliens: Earth War! And speaking of comics, I can’t forget to mention that the Alien legend that is Dave Dorman also contributed to the book, taking to Bristol board to bring to life another fantastic piece.

And Tristan Jones! This man is one of the franchise’s absolute gems. I am so utterly pleased to see him start to be utilized more by other companies such as Titan and NECA, and that he was involved in this book makes it an automatic purchase on that alone. For 40 Years 40 Artists, Jones and regular coloring partner Simon Gough, gives us their interpretation of Lambert’s unseen death, giving us a gloriously detailed and graphic demise for Alien’s audience surrogate!

I was surprised by the inclusion of Rory Lucey and Joey Spiotto, two artists who have previously worked with Titan on Jonesy: Nine Lives on the Nostromo and Alien Next Door, two very charming cartoon-styled books, and their distinctive approaches are there for their inclusions in 40 Years 40 Artists, reminding me again of why I enjoyed both their books so much, with Joey’s piece in particular a fitting “happy birthday” to Alien to finish the book off with.

As for everyone else! There is a lot of really amazing and very varied styles at play in Alien: 40 Years 40 Artists. I’m not going to go through every single one of the pieces, but I just want to briefly talk about some of the pieces that really stood out to me.

Titled Mesoamerican Alien, Jorge ‘Quetza’ Garza’s contribution to the book was one I found myself really drawn to because of Jorge’s Mesoamerican style. Not only did it remind me of H.R Giger’s never-used hieroglyphic wall art for Alien, but it also throwbacks to Paul Anderson’s Alien vs. Predator, a film whose entire premise and art style focuses around Mesoamerican influence. Plus who doesn’t love that stylised Jonesy?! 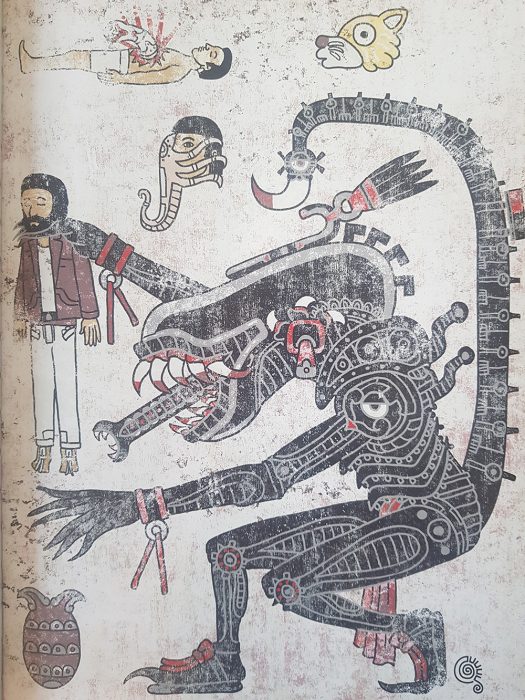 RJ ‘Arvalis’ Palmer was one of those names I didn’t immediately recognize, but I looked him up after his simply phenomenal rendition of the Big Chap in the book. Not only a busy movie and game concept artist, over the last couple of years he also put out a couple of Alien prints with Sideshow Collectibles in conjunction with some of their statues. Palmer’s Big Chap (Finds a Friend) has to be one of the best recreations of Giger’s Alien I have seen. Absolutely stunning.

Marta Alvim’s Xenobed, a ballpoint-pen take on the Alien was one that drew my eye very easily. Not just because of the way Giger’s influence is felt through chaotic detail and the merging of shapes, but in how the Alien is so carefully both hidden but so very noticeable in all those Giger-esque patterns. It’s something I just found myself staring at, absorbed in the chaos and beauty on the page.

Not all the artwork in 40 Years 40 Artists is focused on the Alien form. There’s a lot here that gives love to the other aspects of Alien, whether it be Tom Humberstone’s blue collar boredom, or M.J Erickson’s literal reflection of corporate betrayal, or Sweeney Boo’s depiction of Ripley in a pose of pure power and authority, to alternate posters or Weyland-Yutani propaganda powers, there’s just much more going on here.

I really loved Nathan J. Anderson’s piece, depicting Dallas, Kane and Lambert’s approach to the Derelict, with a simple colour pallet that just evokes that mystery and uncertainty that they’re approaching, and the not quite fully formed Alien title graphic as they didn’t yet know what they were approaching.

And the last I just want to high-light is another one of those pieces that isn’t focused on the Alien, but so strongly connected to an iconic moment. Evan Cagle’s black-and-white piece not only reminded me so strongly of Mark Nelson’s artwork from the original Aliens comic series, but was able to bring me back to that moment, to that following silence in the aftermath of violence, conveyed by the trailing blood and the tipped over dunking bird.

With the praise doled out, I’d also like to point out two artists who committed the cardinal sin of Alien artwork, and that is the egregious mistake of basing their Aliens on that infamous publicity shot of the Alien from Alien vs. Predator. Now this isn’t a slight on that particular design, but if you’re creating artwork a specific film, you should be using that film’s incarnation of the Alien. I’m sorry but I’ve got to give a big thumbs down to David Benzal and Carolyn Craggs for that one. 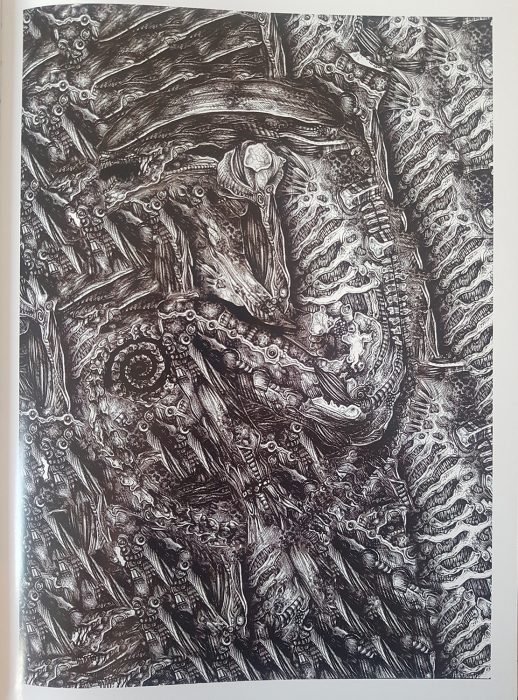 Each artist also wrote several paragraphs, detailing their relationship and background with the Alien film, which was always lovely to read. I never tire of hearing how people first come to be involved with the series and how it influenced them. Some artists also spoke a little about their mentality and design process with their artwork, but I just wish there’d have been a little more detail in that.

Alien: 40 Years 40 Artists is an absolutely stunning love letter to the artistic history of the Alien franchise. Beautifully presented, with some absolutely cracking artwork inside by some phenomenally talented artists! If you appreciate looking at gorgeous artwork of the Alien, or inspired by the Alien, this one is a must buy!