Venture, a direct rival to the Weyland-Yutani corporation, will accept any risk to crush the competition. Thus, when a corporate spy “acquires” a bizarre, leathery egg from a hijacked vessel, she takes it directly to the Venture testing facility on Jericho 3.

Though unaware of the danger it poses, the scientists there recognize their prize’s immeasurable value. Early tests reveal little, however, and they come to an inevitable conclusion. They need a human test subject…

A member of the Jericho 3 security staff, Colonial Marines veteran Zula Hendricks has been tasked with training personnel to deal with anything the treacherous planet can throw their way. Yet nothing can prepare them for the horror that appears–a creature more hideous than any Zula has encountered before.

Unless stopped, it will kill every human being on the planet.

Published at the end of October 2019, Alien: Prototype is Titan Books 8th original Alien novel, and their most recent original story since the phenomenal The Cold Forge in April of 2018. Prior to Prototype’s release, Titan also published an adaptation of Creative Assembly’s Alien: Isolation in July which I wasn’t too fond of.

Unlike a lot of the more recently announced Alien authors, Tim Waggoner hadn’t played in the Alien sandbox before, so I went into Alien: Prototype not knowing what to expect when it came to this book. What I found in Waggoner was an author who was clearly relishing every single word in this book and having the opportunity to write an Alien novel.

Though she has had a small appearance in the Alien: Isolation novel, Prototype is Zula Hendricks big novel debut and I thought it was such a treat. Admittedly I found Aliens: Defiance rocky, and I’ve not been too impressed with the following series Resistance and Rescue either, but I’ve loved Zula and Davies since they were both introduced and the focus on Zula in Prototype was a huge highlight for me.

Set in-between the comic series’ Aliens: Defiance and Aliens: Resistance, Prototype serves as a bridge between the two comics that focuses quite heavily on the development of Zula Hendricks and developing her so that she became less of a lonesome crusader and more of a leader. 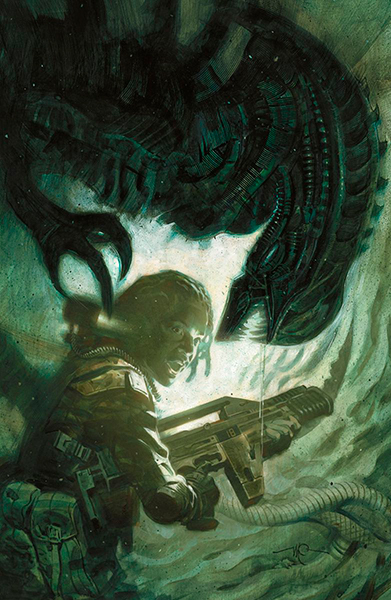 Due to the realistic difficulties in trying to fund a galaxy-spanning crusade for extermination, Zula is having to work. She takes a job with Venture, a new corporation within the Alien lore, to train their security forces. And due to her relatively young age, there’s a rift between the cadets and Zula that is established quite early on.

Actually seeing that rift progress to the almost dangerous levels it did, then seeing Zula’s reaction and resolution to all those relationship issues was immensely satisfying. It all built towards instilling Zula with confidence in terms of leading others against the Aliens. I thought Tim wrote Zula really well and she continued to be a fantastic character to experience the events of Prototype with.

That said, I did find her involvement in this as somewhat convenient. She just happened to be trying to earn some extra cash on the very same planet that happens to have procured an Alien. It felt a little too much like “because plot” but because of how much I ended up enjoying what the book did with both Zula and the Alien, I quickly forgot this issue.

My only major issue with the novel is that I felt like the rest of the characters didn’t receive a great deal of attention or development. All of Zula’s recruits receive introductions with a comment or two about them, but outside of the conflict between Zula and the dissenting recruits, I don’t feel like the rest really had much going for them which was a huge shame considering how satisfying them overcoming the earlier conflict was.

Aleta Fuentes, the head of Venture’s endeavour on Jericho 3, receives a big chapter long introduction that seems to be setting her up for a huge role within the novel but after this she’s barely in it. Dr Gagnon, the novel’s mad scientist, doesn’t rise far above your typical Alien raving madman either. Though his last appearance in the book was amazing!

I do have a huge soft spot for Tamar Prather, the corporate spy that kicks off the events of the novel. The first chapter took me by surprise and was a great introduction to Alien: Prototype and the character. She gets involved a lot more during the second half of the book and I think that attention worked well towards me liking her. It’s just a shame her last appearance in the book felt a little against what we’d learned of her intellect over the rest of the book.

An aspect of Alien: Prototype that really pleased me was what Tim Waggoner did with the Alien itself. Whether it was the small thing of Tim having pheromone intoxication for why people would stick their faces into an Alien egg, giving an explanation for that particular Alien trope, or whether it was going in big on the DNA reflex. 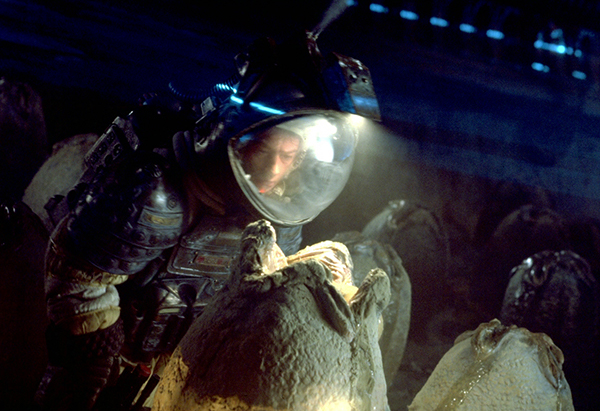 The DNA reflex is something that people tend to just think results in weird and wacky different types of Alien – yes, Kenner, we see you (even if you did pre-date Alien 3!) – but Tim took that particular aspect of the Alien and spun it into something I would never have expected to see.

Alien: Prototype features just one adult Alien, but thanks to a dormant virus in its host, the Alien is ravaged by a form of cellular necrosis – a flesh eating virus. But rather than eat away at the Alien itself, it gives the human characters an additional hurdle because even if you survive an encounter with the Alien, you may find yourself infected by the necrosis and being reduced to a skeleton in no time!

Another aspect of the infected Alien – that they dub in the book as a Necromorph, which I was a little unsure of given the obvious Dead Space connection – that I thought was particularly interesting, was that the Alien actually found itself conflicted by its dual instinctual drive as they conflict directly with each other.

The desire to spread the necrosis just doesn’t gell with the Alien’s desire to propagate because any minor contact with the virus is fatal. The two just don’t work together and the internal conflict that it causes for the Alien was really fascinating to see down there on the page.

Something that has just never really been revisited within the expanded universe is the deleted eggmorphing concept from the Director’s Cut of Alien. It’s been hinted at in some of the more retro Alien vs. Predator games, but that’s about it.

However, like the DNA reflex, it seems to be making something of a reappearance as it’s made a reappearance in the not-quite-officially released Alien: The Roleplaying Game and now Alien: Prototype! It’s not a huge aspect of the novel, but it was something of a surprise and a very welcome one. 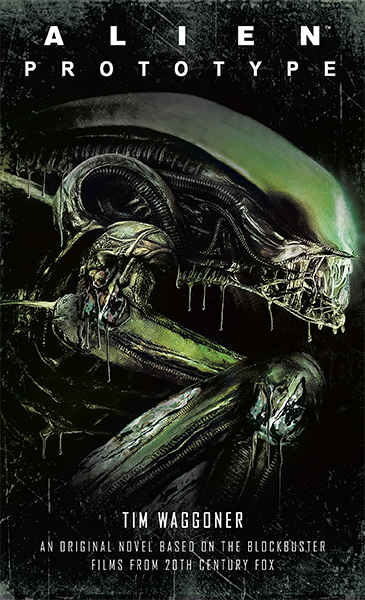 I had such a fun time reading Alien: Prototype, and after being disappointed by Alien: Isolation this was a welcome return to solid ground. It was truly great to have a more in-depth time with Zula Hendricks, and to take the DNA reflex a little further. I just wish some of the other characters had have had more focus.

But ultimately I thoroughly enjoyed Alien: Prototype. What I truly loved about Alien: Prototype was just how much fun Tim Waggoner was clearly having playing in the Alien franchise. This felt like someone who was genuinely enjoying the opportunity that he had, and was relishing every last word and every addition he was making to the franchise.