Here it is. The 18 inch tall limited edition Super 7 Aliens Warrior prototype for a 1986 ‘Aliens‘ action figure that never existed.

You’d be right thinking that sounds like an oxymoron as 1986 saw no production or release of any action figures for the second movie whatsoever. In which case, this strange tribute figure may be considered a pretend prototype – a ‘Pretend-O-Type’? – if you wish. A hypothetical test shot figure based on a ‘what if?’ scenario, what if Kenner Products or other third party partnership with 20th Century Fox had continued to manufacture tie-in merchandise for the 1986 movie, ‘Aliens‘.

The Super 7 Aliens Warrior prototype was released exclusively at San Diego Comic Con in 2016 and was also only very briefly available on Super 7’s online store soon thereafter. It is an experimental conceptual item that clearly owes its origin to Kenner’s earlier Alien action figure that failed miserably at retail in 1979.

This particular celebratory item is intimately derived from that figure and definitely aimed at people who are familiar with the original 1979 release. More-so if they have an appreciation for the other weird and wonderful Alien figure derivations released by other contemporary companies of the time. 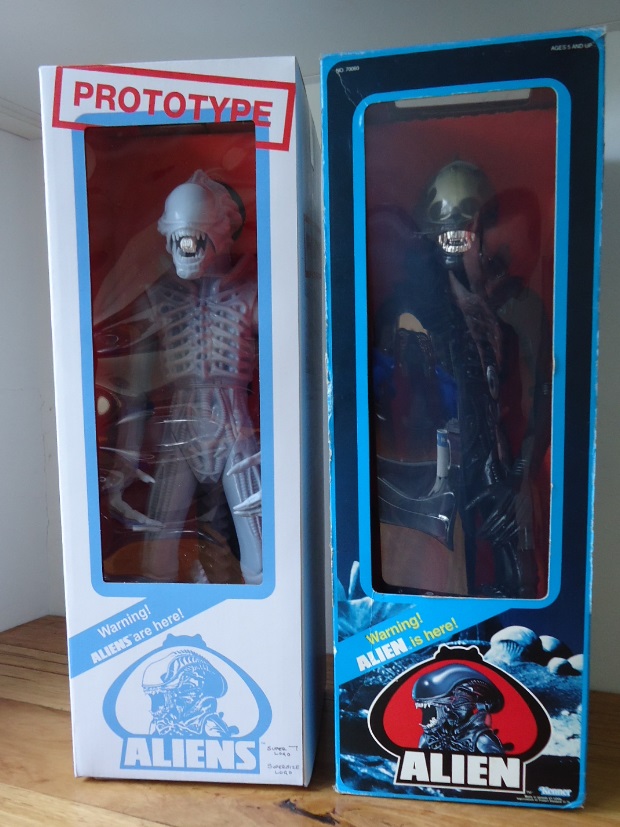 The Super 7 Aliens Warrior Prototype in box next to an original Kenner 19″ Alien figure.

It’s this angle I will embrace for this review.

In this regard, it’s important to cast our attention back to a point in Alien action figure history that this item is intended to retroactively represent. In 1984, 2 years prior to ‘Aliens‘ release, Tsukuda Hobby launched their officially licenced 18 inch tall Jumbo ‘Alien‘ figure. Tsukuda Hobby’s figure was a shameless derivation of the original Kenner figure and it was handled miserably as a production item. It was cheaply made and genuinely awful.

This recent SDCC exclusive Super 7 Aliens Warrior prototype shares some basic philosophy with that onerous 1984 release: Why bother generating a completely fresh sculpt for the figure when you can just modify the existing version to suit your goals?

Super 7 have embraced this low budget approach wholeheartedly to deliver their faux prototype. Had such a piece of merchandise gone into full series production and entered the market place back then, it would have been declared a ‘rip off!’ and a ‘Fake!’ by fans in the mid 1980’s.

Such declarations and claims really did happen when the Tsukuda Hobby item made its way into fan’s hands of the day. This is exactly what Super 7 have made here. Despite the fact it’s an officially licenced 20th Century Fox approved product, it’s a fake. Remember, the Tsukuda item was also officially supported by Fox and was also based off of that same figure.

I’m not sure if it was Super 7’s intention to emulate, harness and amplify the somewhat dubious production values and methods of how Kenner’s original figure was treated in the mid 1980’s (and also later in 1990’s) by successive companies but that’s simply how these products were prepared back in the day.

It sure appears to be a deliberate and conscious attempt to do so. Just take the original figure away from the possession of a previous licence holder, make a few modifications to it and ‘Voila! It’s done!’ and it’s ready to hit the shelves and sell at full retail price in a fresh, new package and badged as a completely new product. It’s exactly what Super 7 have done here. It’s dubious and it’s sloppy. It’s no wonder fans weren’t impressed.

It’s masterfully recreated by Super 7 with this iteration. 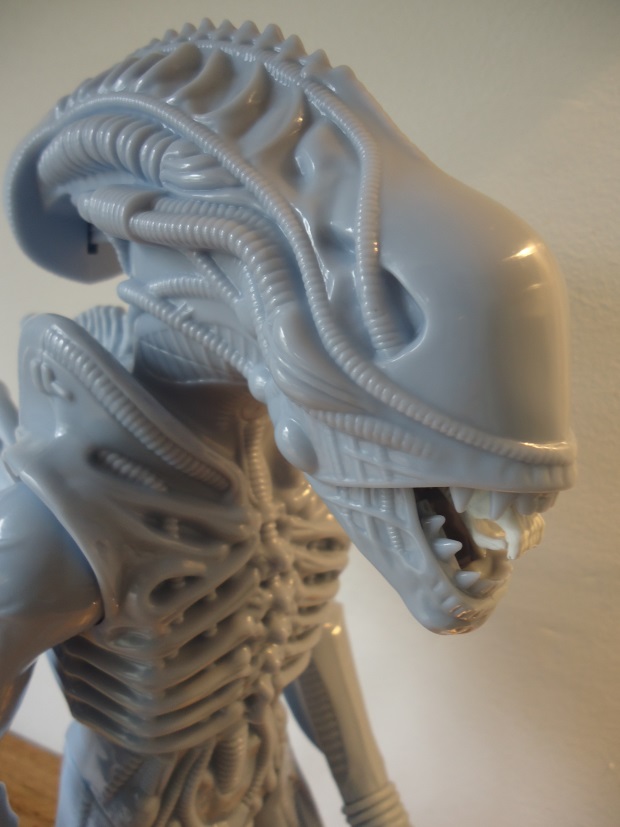 They have eloquently captured this nefarious attitude fully by releasing this strange limited edition fake prototype that was not made in 1986. While it’s worthy to note the similarities in production values and attitude to its contemporaries of yesteryear, this item was released in 2016 and it does appear to be cast from moulds generated by 3D scanning. Aside from modelling changes made to the head, arms, hands and feet to make the figure match the appearance of the aliens seen in the 2nd movie, this figure is essentially a modernised light blue re-issue of the older 37 year old Kenner item.

This is true in just about every aspect including all 8 points of articulation present on the prototype. Articulation that is limited to simple swivels on the hips, wrists and tail. Ball joints are present for the arms, as is the signature spring loaded lever system that operates the jaws and tongue. All these features are perfectly emulated.

Some Super 7 promotional material lists neck articulation as well but this information is erroneous and this movement is not present in the figure at all. An equally fraudulent ‘work in progress’ packaging that celebrates the production processes that would normally be entailed as part of its manufacturing is also included.

Not that there is any doubt in the first place, but if you dismantle the thing, which I have done, you’ll find even more undeniable evidence of the figure’s origin inside. Assembly and engineering of the figure has been minimally altered to accommodate modern methods but it is otherwise observably a Kenner derivative right through to the core.

Is this a good thing?

Any immediacy to associate negative connotations to words such as ‘fake’, ‘fraudulent’ and ‘rip off’ to this experimental concept item need to be reigned in. Such is the value of the inverse reputation that has built around this series of figures during the passing decades; and as such, the notoriety resulting from such reputation has only contributed to their popular Lore. 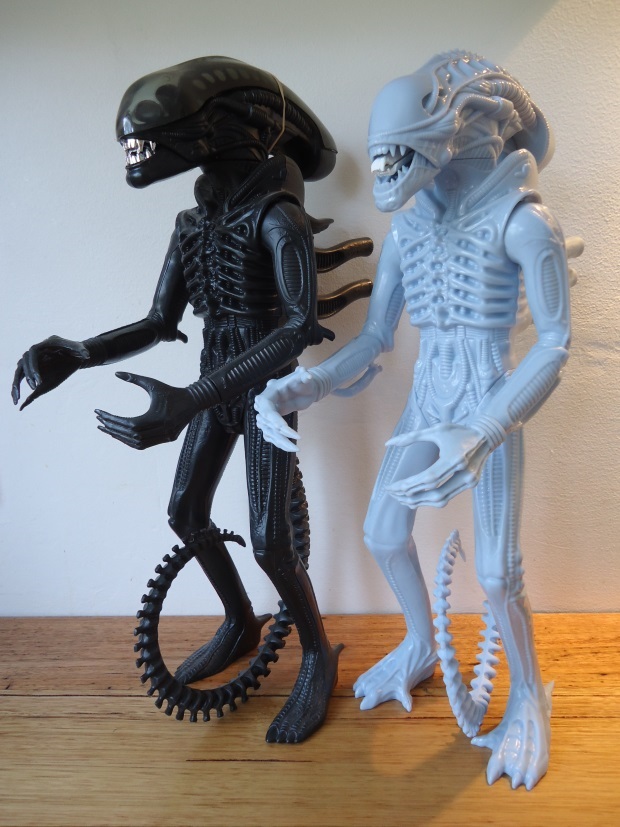 Thankfully, the boldness of this particular item does everything it possibly can to accommodate and celebrate an outrageous past as much as it also celebrates being a speculative ‘what if’ concept figure. Undeniably, this item is a welcome addition to my collection of old 1979 Kenner Alien action figures. It proudly joins all the other strange ‘WTF?’ derivations that followed throughout the 1980’s, 1990’s and obviously still continuing to appear today. This figure being a complete ‘fraud’ simply adds to the brazen milieu that surrounds these controversial toys. Such scandal fits the ambience, perfectly.

Thank you Super 7 for adding to the Weird World of the old Kenner Alien action figure with such a prize. This one is a real corker! I love it. It’s now standing proudly in the dubious company of all my other junk-ass Tsukuda Hobby and Halcyon Alien figures like some dignified historical anomaly that these lurid things have all become.

After all, why would anyone manufacture a fake ‘prototype’ of a figure that never existed? It’s limited production run and release preclude it from being correctly labelled a prototype in the proper sense, anyway. So it’s a misnomer at the most basic level. Simply because of the weird factor, that’s why. When it comes to this specialised line of fully licenced derivative action figures, that ‘weird’ factor is significantly elevated to a high level by default. Significantly, a true prototype of this ‘prototype’ must exist somewhere, hidden away in Super 7’s studios and offices. This is not that item.

I’m looking forward to seeing if Super 7 will follow up this limited release item with a full mass market edition, as I suspect they will. A general public release black box edition, maybe? That will be fun! If so, I can’t wait to get my hands on one! This weird prototype action figure collectible is the tenth iteration of the old 1979 Kenner big chap thus making it the ninth time it has been commandeered and modified by a successor manufacturer. One more offbeat tribute figure is more than welcome.

From the standpoint of someone who is a big fan of the original Kenner item, this figure is fantastic! Even if it does fall into the ‘It’s good for the wrong reasons’ category, it still takes those dubious values, claims them as its own and makes a virtue of them.

Great for the ‘LOL’ and ‘WTF?’ factors; but I certainly wouldn’t recommend it to everyone.

The Super 7 Aliens Warrior Prototype in box next to an original Kenner 11″ Alien figure.