That’s the first impression you will get once you wrangle this monstrosity out of its box. Once you attempt to stand it on its own 2 feet, however, you will realise it’s size and mass start to work against it. It’s a heavy figure and when you want it to hold a pose you will find that it will have a tendency to topple over too easily. The materials it is made of are dense and not conducive to it remaining upright without some assistance.

You will need to prop it up; by either leaning it against a wall or backdrop or use a support stand of some nature. Furthermore, it’s only with the use of a support stand that will you be able to take full advantage of the figure’s terrific range of posability. Of course, the flexible wire core within the tail will go a long way to keeping the figure upright but by doing so, you will be dedicating this prehensile limb to the sole purpose of keeping the figure on its feet. Use of a display stand will free the tail to be positioned in any desired pose.

It’s too bad that the figure has to be treated in this way because the detailing is near perfect. It’s a fantastic figure. Notwithstanding some issues I would have like to have seen treated differently, such as the milky carapace for example. Aside from that the head is well appointed in presentation with all the features you would expect to find. 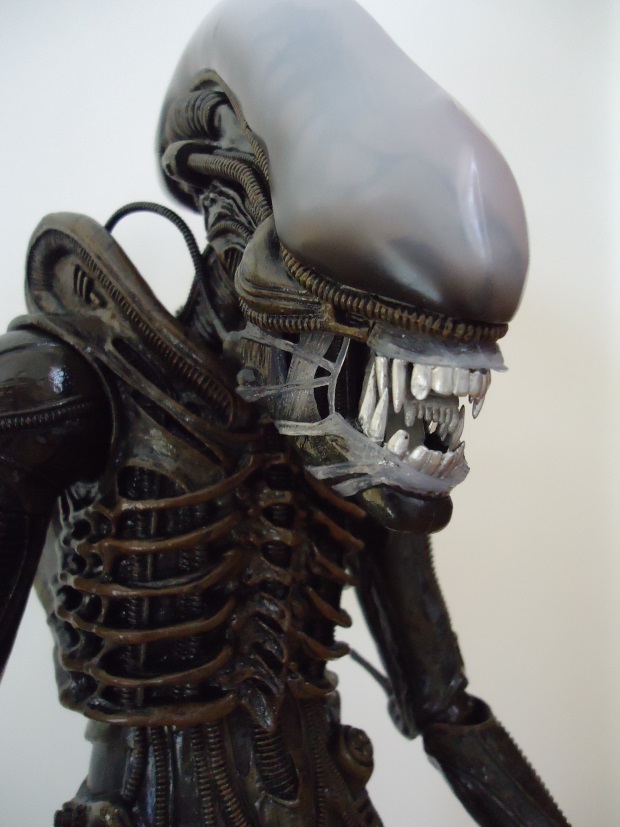 The skull beneath the carapace could have been a little more prominent and the eerie empty eye sockets appear to be a little lower than they should be be but otherwise such details are very minor and such nitpicks will come down to personal preference. I have heard that some people have had issues with the lips on their figures and luckily this particular sample actually looks decent in this regard. It’s better than I was anticipating. It appears that there are 2 variants of the figure, one that features the lips closed and another with them curled, in a snarling pose. This figure features the latter set of lips and the selection will be random as to which one you pick up.

The rest of the body detailing is fantastic and you’ll be constantly experimenting with the multiple joints on all parts of the figure to see what it’s actually capable of doing. From the top of the head to the toes on its feet you’ll find a great range of articulation. The jaw is supported by a hinge joint and the dentured tongue can manually slide in and out of the mouth.

The head sits upon a ball and socket assembly that allows a good range of rotation in most directions. The arms can be moved around upon ball and socket joints accompanied by a ratcheted hinge at the shoulder. You’ll also find a cut joint on the upper arm, a hinge at the elbow and a spindle joint at the wrist for each hand. These joints all allow a great deal of flexibility in placing the arms in just about any pose you want.

The torso is split at the midriff with another ball and socket joint to add some additional poseable options. A stiff ball and socket joint with a sturdy ratchet is present at the hips to help the large and heavy figure support itself. Then below this, you will find the figure possesses a set of double jointed ratcheted hinge joints at the knees to give it fully functional patellas on both legs. This is a very welcome feature and allows the figure to be posed with an excellent range of motion and allow for it to be fully supported with relative confidence. It’s a great solution to getting maximum articulation when bending the legs at the knees and is critical to be able to support the figure properly.

Upon the feet you will find a limited motion ball and socket joint at the ankles that acts as a pivot and another ratcheted hinge at each of the toes. To complete the figure, a flexible wire core tail is present and, as mentioned above, this limb can be used to help support a free standing figure. 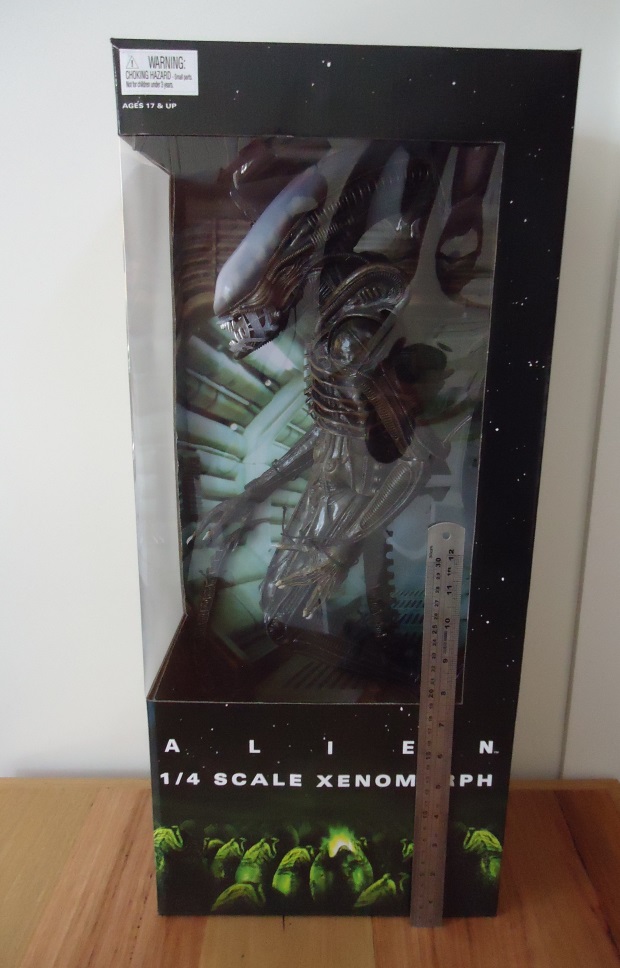 The box has excellent presentation with a wraparound window on the front that displays the figure beautifully against a Nostromo interior backdrop. You’ll find the figure secured in place to the insert board with no less than half a dozen wire ties. You can either spend time to untwist them all or just cut through them with a good sharp pair of scissors.

Once you have released the figure from the box, you will need to be prepared for some assembly. It’s nothing too demanding and at least there is no nonsensical assembly required like attaching the legs which was an issue in NECA’s previous 22 inch tall entry into large scale ‘ALIEN’ action figure territory. Here, instead you will find it necessary to attach the 5 dorsal appendages onto the figure’s back.

Each one has it’s own distinct slot and you should be able to work out which one goes where without any trouble. The slots and tabs themselves are a little tight so you might want to soften the appendages by dipping their attachment points in very hot water in order to soften them up and set them into place.

The paintwork upon the figure is better than just being serviceable as some subtle highlights and details are evidence of a decent job. The selection of colour might not suit everyone’s taste but the attention to detail is overall positive and tidy. I’ve seen other people comment that the paintwork isn’t quite up to standard but this particular sample appears to be very good.

No additional accessories are present with the figure. Maybe an alternate set of lips would have been nice. 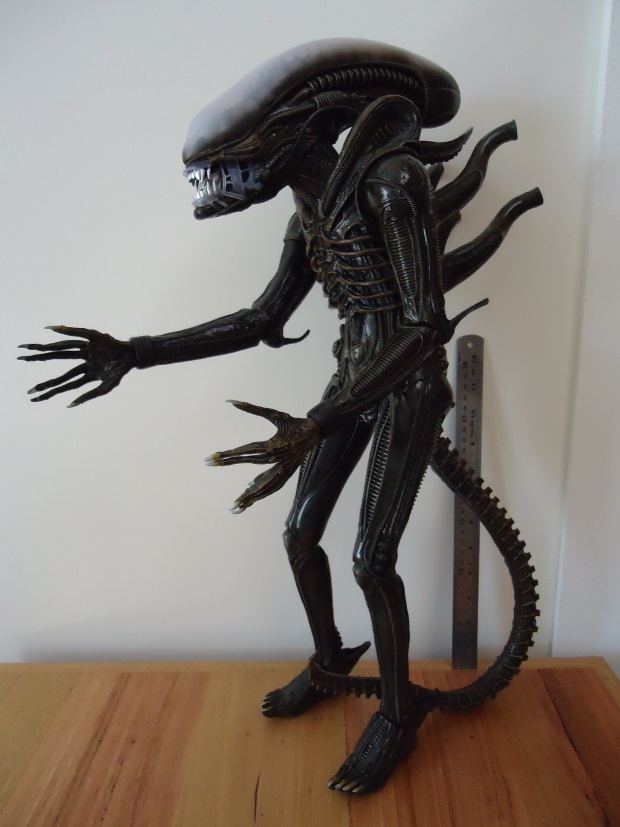 It’s a great figure and most fans will love it. At 22 inches tall, it’s reasonably priced. You can expect to pay $100 – $200 for the figure, depending what part of the World you live in; and for what you get at that price, it’s a great purchase that will become an admirable centrepiece to your collection.

I’ve heard other people claim that they have had issues with their figure and with how the carapace has been glued in place along with how the lips lack finish and are even missing; but this particular figure looks pretty much what the manufacturer intended it to be and the overall detailing is superb. It’s just too bad that the absolutely great range of articulation present to pose the figure in is curtailed by its weighty nature and I found this to be its one substantially serious drawback.

It’s easy to overcome this flaw, though; buy or make your own display stand to get the most out of what this Big Chap has to offer in terms of posability. Having to assemble the few pieces that need to be attached can be an annoyance but it’s no big deal once the pieces are fitted correctly. Just don’t lose any of them. Some things never change. It’s not my new favourite figure; but at the same time, it’s still a damned good one and it will be an impressive addition to your collection.