Hiya Toys just keeps releasing new Alien, Predator, and AVP figures. At this point I would imagine only NECA has them beat for the sheer variety of posable figures they’ve put out. There’s even quite a few more planned for this year, and it won’t be long before they’ve released figures from every film in the franchises (sans Prometheus), as well as from the video game Aliens: Colonial Marines, which is where they started with the Alien license.

The ‘Exquisite Mini’ figures by Hiya are 1:18 scale, a bit less than 4″, and in line with classic G. I. Joe figures. While I typically preferred larger 6″ to 7″ figures when I was younger, I’ve come around to this smaller format, and Hiya has brought very nice detail and articulation regardless of the size.

Recently they’ve released their first Alien figure from the original film, known by fans as ‘Big Chap’ and also how it’s named on the packaging. Big Chap is considered by many to be the pinnacle of Xenomorph design, the classic original designed by H. R. Giger himself. Many figures of this Alien design have been produced by different companies through the years, and fans have compared these releases to see which company has produced a figure with the best screen accuracy.

The Big Chap by Hiya Toys is a solid figure, presenting a faithful recreation of the original Alien. The figure is not without a few issues, but overall it’s a worthy Big Chap. The paint job works well, with a semi-glossy black look, featuring grey and slight green tones for the accents and highlights. The detail is overall fantastic with the only problem spot I can see being the mouth. The teeth lack fine detail and the silver paint in the area spills upwards a little. Hiya recently released in improved 2nd version of their Predator Jungle Hunter figure so perhaps Big Chap will eventually get the same treatment.

The articulation has plenty of options, with the upper legs able to extend outward a bit allowing for Big Chap to even sit cross legged. The joints in this section were a bit loose though, and I could see this becoming a problem for the figure standing eventually. The elbow joints had the opposite problem, they were quite stiff, and I had to use some hot water to loosen them as I didn’t want to use any more force. 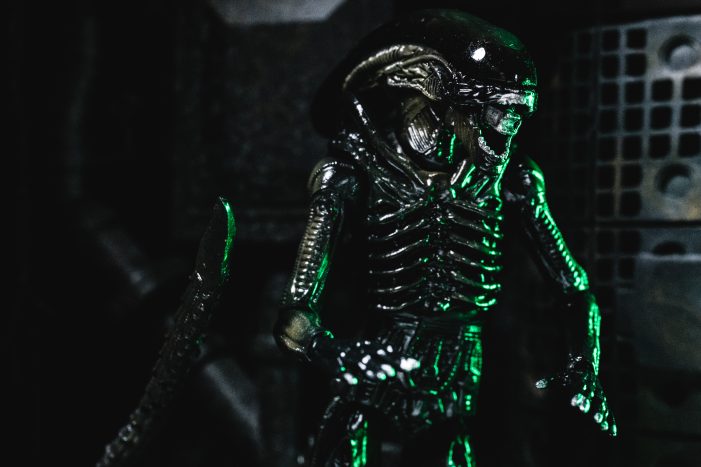 The figure’s packaging is a simple black box with blue accents and an interior clamshell, featuring the Alien logo and images of the figure. There’s an exclusive alternate packaging version available from GameStop, which recreates the look of the retro 1979 Kenner figure release.

Also recently released are a number of figures from the first AVP film. We’ll start with our young Predator hunting trio: Scar, Celtic, and Chopper. Based on the film designs of special effects workshop StudioADI, this film was their first foray in tackling the Predator characters. As with Big Chap, these Hiya figures are faithful to the film, even maintaining that sometimes criticized bulky design that the NECA AVP figures seemed to veer away from.

Detail on the Predators is quite strong, seemingly a noticeable improvement from their earlier Predator figures. The masks, armor, and weaponry are all impressive. The paint job works well, recreating the dull beige, brown, and orange tones of the Predator skin, with a nice weathered metallic shine for the armor.

The figures feature a number of accessories. All three of them include a shuriken weapon. I know I keep repeating myself about the detail, but the tiny little shuriken and leg daggers really impressed me. The accessories are pretty small so you best make sure not to lose them if you pick these up! Scar and Celtic feature two spears each, one extended and one retracted, while Chopper has a pair of skull pikes that he adorned his back with in the film. Unfortunately, there only seems to be a single clip for one of the pikes on Chopper’s back. Each figure also includes a pair of extra hands so they can grip their weapon accessories.

Articulation is well done, featuring Hiya’s recently redesigned knee and elbow joints. The back and abdominal armor pieces do somewhat restrict waist rotation. The number of individual dreadlocks are fantastic here, though upon initially receiving the figures they were splayed out a bit, which some hot air can quickly fix.

This trio of Predators is one I’d also recommend. Considering their size, these latest of the Hiya Toys offerings have really been fantastic. There are also a number of variations for the AVP Predators available such as battle damaged, unmasked, invisible, and active camouflage. 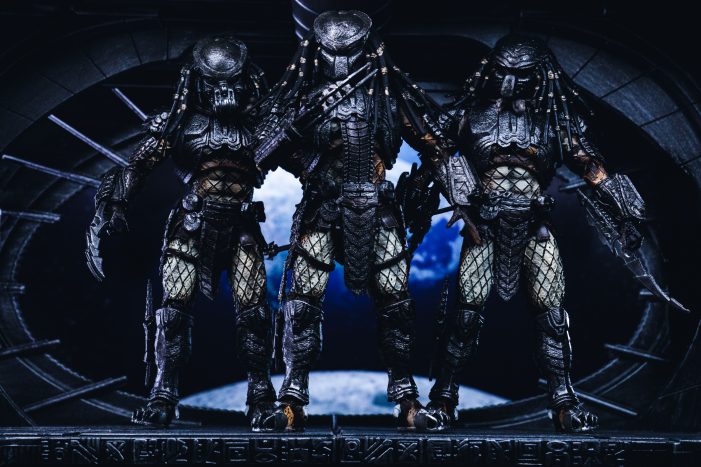 I’ve really been enjoying the recent releases from Hiya, and I’m looking forward to what they have scheduled for release throughout 2022. Their Aliens vs. Predator: Requiem figures are right around the corner!

I put together a couple video review unboxings of these figures below for our YouTube channel, you can check them out below!

If you’d like to purchase these and other Hiya Alien, Predator, and AVP figures, online retailers Big Bad Toy Store and Entertainment Earth ship to the US, UK, and abroad. These figures were provided Hiya Toys for review.